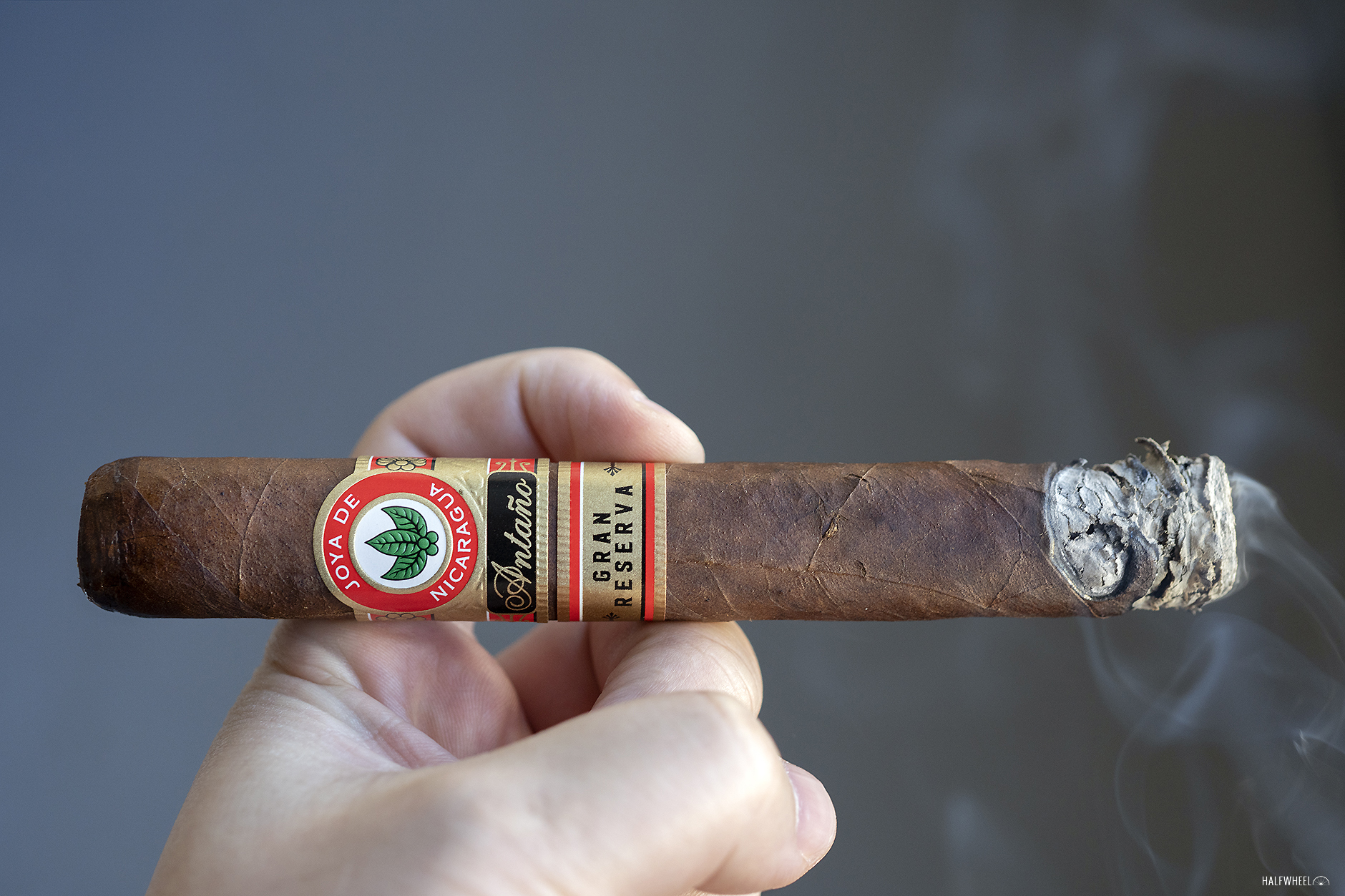 In 2021, Joya de Nicaragua celebrated the 20th anniversary of its Antaño family of lines. In an industry that loves to create new cigars to honor milestones, it was of no surprise to learn that there would be a new Antaño made to commemorate the occasion. If anything, the only odd part was how the company chose to honor the anniversary.

Rather than creating an entirely new blend, or using the original Antaño 1970 blend, it opted to release a new vitola for the Antaño Gran Reserva line, which was introduced in 2017. The Gran Reserva is the first of two recent attempts to introduce a milder Antaño blend. For this cigar, the company said it took the Antaño 1970 blend and reworked it to be a bit milder than the stronger blend that makes up the Antaño 1970. This includes using fillers aged for up to five years. The cigar to celebrate the 20th anniversary is the Joya de Nicaragua Antaño Gran Reserva GT20, a 6 x 52 box-pressed toro. It’s the fifth size for the line.

“When anybody thinks of Nicaraguan powerhouse cigars, they undoubtedly think of Antaño. This is the cigar on which cigar legends are inspired,” said Dr. Alejandro Martínez Cuenca, chairman of Joya de Nicaragua, in a press release last April. “When we first tried the blend in progress, it was a bomb! Everybody in the room became so excited because it was exactly what we wanted: it was full-bodied and really hit your palate in all the places where we wanted it to hit … and we knew it was to become a game changer.” 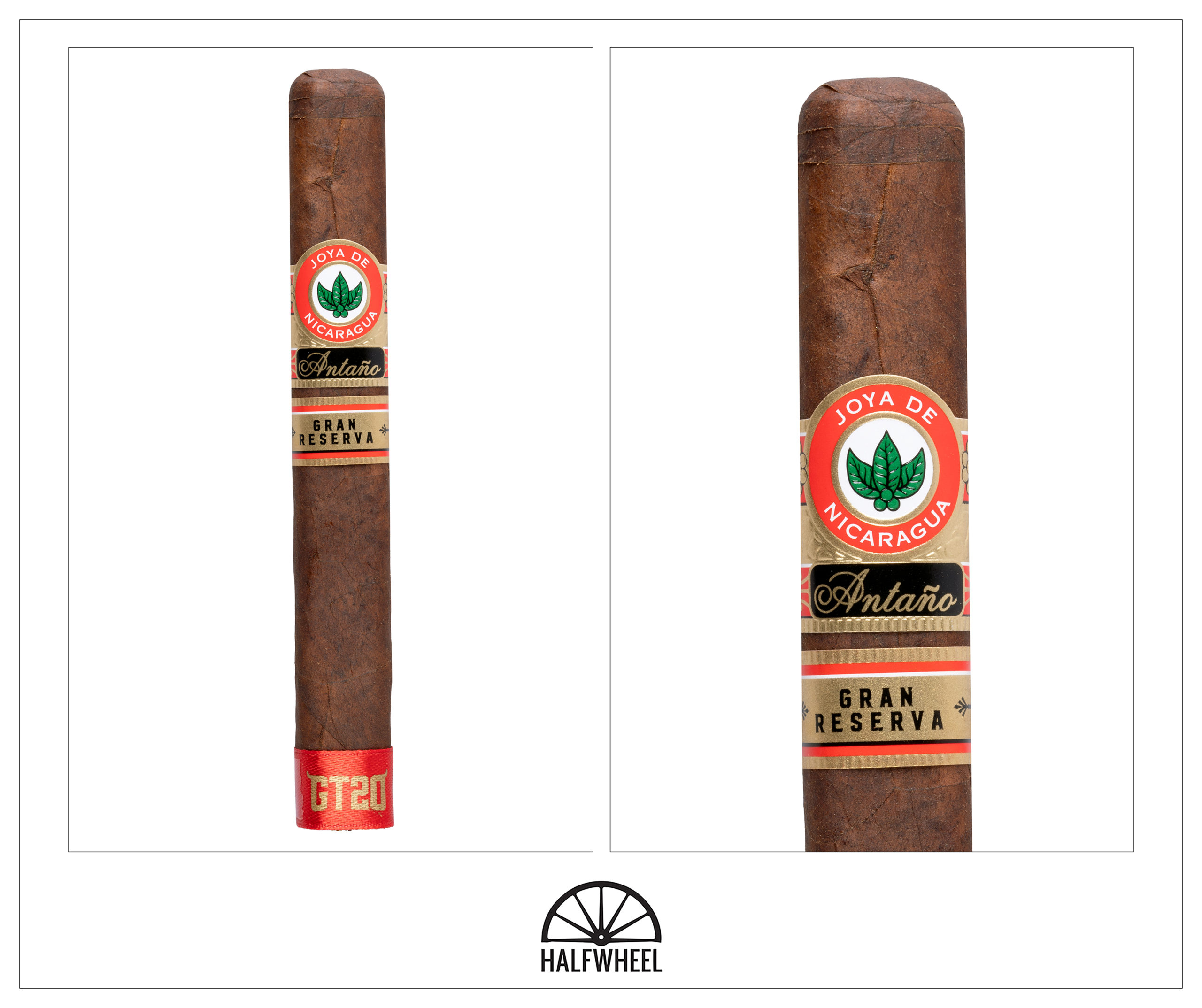 Because the first cigar I smoke is about as firm as a rock, I pay extra attention to the firmness of the next two cigars. The second cigar is much better, though there’s a noticeable soft spot about one-quarter inch below the secondary band, and while the third cigar is quite firm, it doesn’t warrant the same rock hard description I’d use for the first one. The wrapper is quite dark with plenty of red coming through. Compared to the recent run of cigars I’ve been reviewing lately, this isn’t the most consistent color I’ve seen. It’s not to say it’s spotted, but I can see some color variation, which hasn’t been happening of late. Midway through writing this paragraph I needed to do a double-take, the cigars are box-pressed. That’s not normally something that cause me to doubt myself, but given the news story I wrote about these cigars is currently on my screen, it’s a bit surprising because the picture for the news story shows round cigars. It would appear that someone took the normal Gran Toro box and added a GT20 logo inside the lid as the box also says the cigars are 54 ring gauge, which the GT20 is not. The aroma from the wrapper smells like sweet raisins over some woody and creamy flavors. One cigar reminds me a bit of smelling a bag of double dark chocolate Milano cookies. The foot also smells like some raisins, though it’s a bit fruitier than before. I still smell creaminess and woody flavors, but they are milder than what the wrapper smells like. Cold draws are medium-plus in intensity with a woody mixture leading the way over vanilla ice cream, a fruitiness that tastes a bit like rotten peaches with some tomato, and acidity. One cigar has a lot more chocolate flavor, a sensation I can’t pick up in the other two cigars.

The Joya de Nicaragua Antaño Gran Reserva GT20 starts with a pretty balanced mixture of toastiness, cedar, leather and then some generic woodiness, nuttiness and creaminess as the finish takes effect. Pretty early on, I feel the cigar struggling to burn properly. It’s possible this was user error, so I get my lighter out to make sure all parts of the cigar are lit. Given that both the second and third cigars also struggle with staying lit within five minutes after lighting—and what happens later in the first cigar—this ends up not being user error, though it is a sign of things to come. Flavor-wise, there’s cedar, earthiness, black pepper, green apple and saltiness. The finish has leather, white pepper, creaminess, cedar and some weird fruitiness. Retrohales have a surprising amount of floral flavors followed by saltiness, some brighter wood flavors and a touch of creaminess. The finish has irritation beneath my tongue and something that reminds me of the smell of peppercorns sitting on the top of my tongue. There’s still both cedar and creaminess, but it’s not as exciting as the retrohale itself. Flavor and body are both medium-full and strength is medium. Multiple touch-ups are needed to keep each cigar burning. The cigar that was rock hard has a much tighter draw than the other two cigars, though I’m not sure it makes much a difference in terms of a result. All three cigars are smoking remarkably similar with a pretty consistent list of pros and cons.

At its best, the GT20 has an interesting mixture of grains over nuttiness, saltine crackers, earthiness and a demi-glace flavor. Earthiness picks up a lot on the finish, though there are touches of herbal flavors, black pepper, peppercorns, a mild fruity sweetness and some saltiness. Retrohales have a mixture of woody flavors, smoked meats and grains over some subtle sweetness, black tea and a short-lived black pepper flavor. For the first few seconds after the smoke leaves my nostrils, it’s largely white pepper and some herbal flavors, but the grains eventually take over the palate, lasting for about 15 seconds with cinnamon, black pepper and earthiness fading in and out. Unfortunately, as the cigar gets closer and closer to the end the earthiness and toastiness take over. Given the number of touch-ups—probably 1.5 uses of the lighter per inch—I’m not surprised it’s happening; if anything, I’m surprised by how the other flavors are able to hold up. Flavor is closer to full, body is medium-full but reducing and strength is medium-plus. The frequency of the touch-ups increases slightly compared to the first third, though I’m not sure it’s a negligible difference. By the final third, I feel pretty confident that what I’m tasting is not representative of what the Joya de Nicaragua Antaño Gran Reserva GT20 would taste like without the touch-ups. While it doesn’t have the toastiness of a cigar that goes out and gets relit constantly, it does have the overwhelming earthy characteristic that seems to happen when the lighter gets used this much. There’s an earthiness that envelops everything else—sunflower seeds, toastiness, black pepper, subtle sweetness, cedar, coffee—and is impossible to not taste during any point of the final third. The finish sees leather try to meet the intensity-level of the earthiness, but it’s short-lived. I’ve got smokiness and then, after 10 seconds, some black pepper hitting my tongue. Retrohales have earthiness, though accented by a brighter pepper flavor and a lively cedar. The finish has a crisp basil accent, but it’s probably 95 percent earthiness. Flavor is full, body is medium-full and strength seems to yo-yo between medium-plus and medium-full depending on the puff. Construction is marginally better than the second third, the relights are still a common theme but I make one or two fewer than I did in the second third. Why won’t this cigar stay lit? That was a pretty consistent thought during the three Joya de Nicaragua Antaño Gran Reserva GT20 I smoked for this review. While nowhere near as bad as some other cigars I’ve smoked recently, I did not expect to have to use my lighter as much as I did during these three cigars. Flavor-wise the cigar was decent enough, though far from the best—or even the top quarter—of what Joya de Nicaragua makes. I liked this blend when it debuted, but construction issues derailed this from delivering a similar impression.