As far as specific cigars that I’ve seen the most on Instagram over the last few weeks, AGANORSA Leaf’s JFR Lunatic Torch line seems like it’s probably in the lead. Much of that has to do with Terence Reilly, the company’s vice-president, continually posting or reposting pictures of the cigar on retail shelves. Given where the world is at the moment, it seems like a pretty good idea.

The JFR Lunatic Torch isn’t a new name, but the company decided to revamp the cigar for 2020. The original debuted in 2016, a Nicaraguan puro capped off by a five-year-old corojo 99 wrapper, and offered in a single 7 x 50 Churchill size. It shipped to retailers with a rather simple red on white band that just read LUNATIC.

While AGNORSA Leaf never discontinued the cigar, the company says it took the Lunatic Torch off its sales sheet. That meant retailers who wanted to buy the cigar still could, but they would have to ask for it specifically. 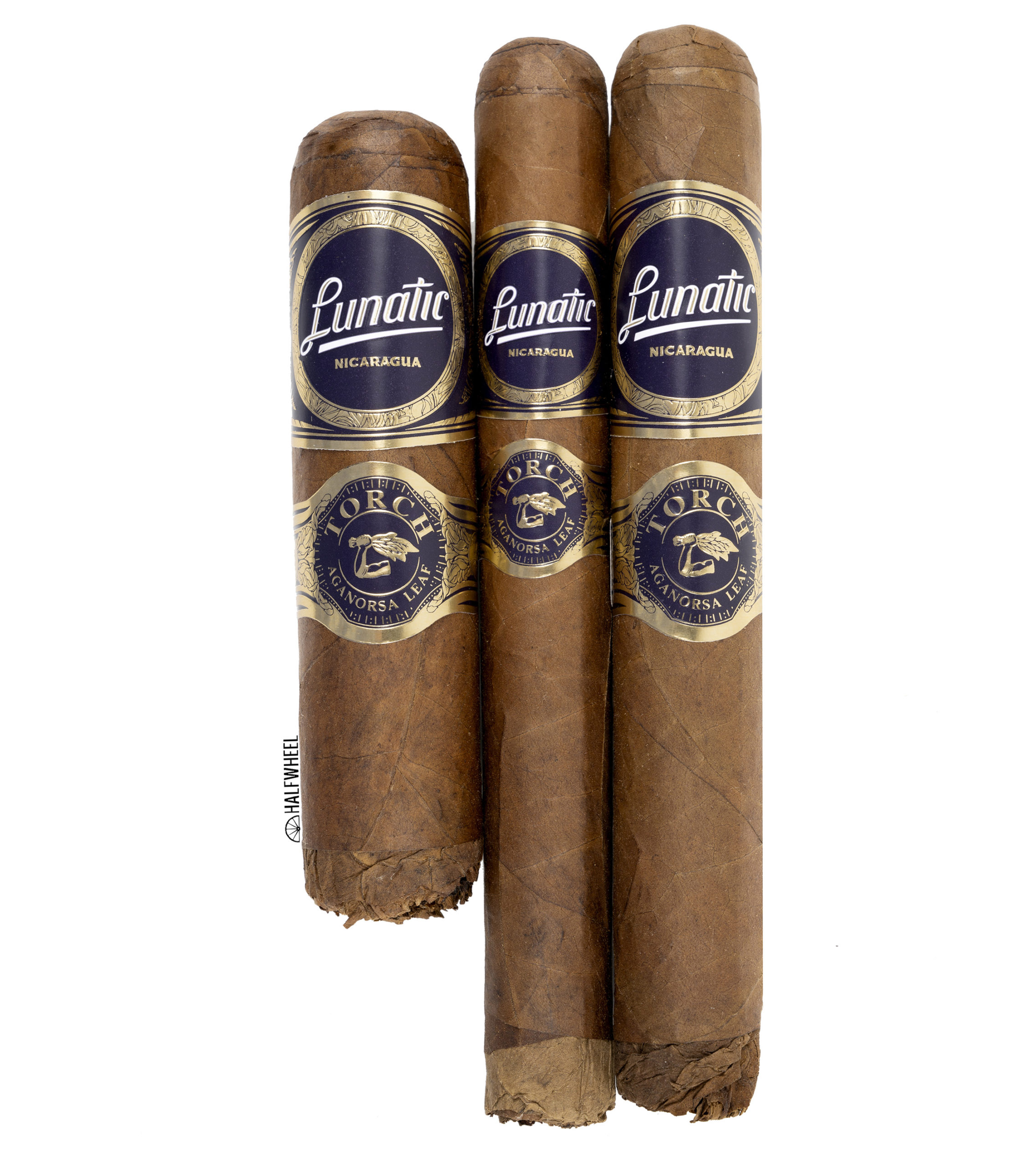 The cigar keeps the same blend as the original, a Nicaraguan puro using a corojo 99 wrapper from Jalapa, double binders from Estelí and Jalapa, and filler tobaccos also from Estelí and Jalapa. Like the original, the cigars have a brushed or shaggy foot, meaning the first half-inch of the cigar is missing its wrapper. The idea here is to let a smoker taste the fillers by themselves and then get to experience the blend altogether.

Unlike other companies—if not most companies—that have made a cigar with an uncovered foot, AGANORSA Leaf is measuring the entire cigar in its dimensions. The dimensions of a lot of cigars with brushed feet only get reflect the parts with the wrapper on it, something that’s always confused me.

AGANORSA Leaf has updated the packaging to be more in line with the rest of the JFR Lunatic line, giving it a dark purple hue contrasted by a rather shiny gold.

Currently, the line is only offered at roughly 75 retailers, stores that are designated as AGANORSA Select accounts. Other stores will be able to purchase the line sometime this summer. 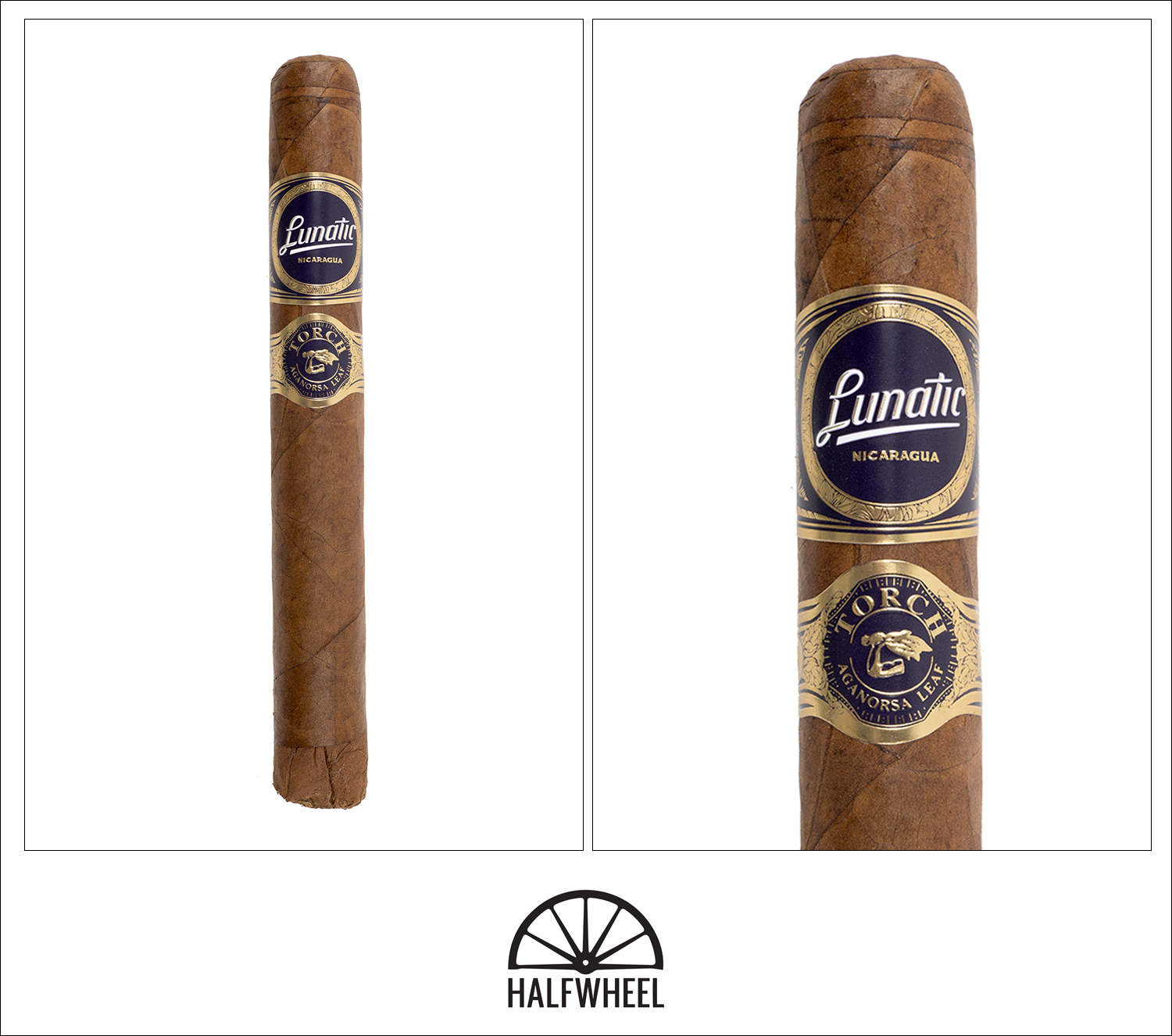 “Oooo a covered foot,” is the start of my notes for this cigar. I actually said those words out loud as I pulled the first sample out of my review box. It was said with about as much sarcasm as there is water in the ocean. The reason for that was apparent before I even took the cigar out of the cellophane. A covered foot is generally going to be a messier experience than a normal foot. With each cigar I could actually see some bits of tobacco that had gotten loose in the cellophane and traveled up to the top of the cigar. The wrapper has a slightly red tone and a lot of veins. One sample has a small circle, roughly the size of a miniature M&M’s, of tobacco missing from where the wrapper is. Aroma from the wrapper is medium with leather, some barnyard and a bit of saltiness. As generic the wrapper was, the foot is quite distinct. It reminds me of being in a room used to dry filler tobaccos before they are rolled into cigars. There’s a lot of chocolate and tobacco notes with some ammonia. The cold draw is super open in terms of resistance. It’s medium-full in flavor with chocolate, ammonia and grapes.

I don’t do anything different lighting this cigar than I would a cigar with a normal foot, just a single torch flame moving around the end of the foot. Not surprisingly, there’s a ton of smoke coming off the foot once I start the lighting ritual, which would make sense given the physics with wrapper tobaccos compared to the rest of the blend. The first puff has cocoa, an underlying sweetness and some coffee. The finish is very interesting with a dry jasmine tea-like flavor that mimics how the tea affects certain parts of my mouth, along with a burnt sensation. Once the wrapper starts burning I can pick up an added sweetness. Unfortunately, the standout—albeit, not the strongest—flavor is some harshness. Upfront there’s a sweet cherry, nuttiness and a generic mixture of flavors that seems like it’s just waiting to break free but never does. Retrohales are very sharp with lemon and lavender, though it leads to a very enjoyable bread flavor on the finish. If I don’t blow smoke through the nose, the finish is rather generic with tobacco notes, some mild caramel and a bit of coffee. It’s quite a bit milder than the other sensations and makes it a lot tougher to pick up flavors. Overall, the flavor is full, body is full and strength is medium-full. Construction is fine, though the burn line certainly won’t win any awards. Smoke production, particularly from the foot, is about as impressive as any cigar I’ve smoked this year.

While the intensity of the flavors doesn’t lose a beat, the JFR Lunatic Leaf Torch is certainly more refined in the middle portions. The flavor gets much toastier with some cardamon, dry pasta and a reduced acidity. Retrohales have a stronger caramel flavor, lots of leather and then some harshness. The finish has pasta, some more cardamon and a burnt meatiness that reminds me of burnt pork skin. Flavor, body and strength are all solidly full. For as much smoke is coming off the foot of the cigar, the smoke from the top end of the cigar is waning. A quick touch-up and it’s back to the full force that it was earlier. At least for 20 minutes or so, each cigar ends up requiring two touch-ups before making it to the final third. Picking up individual flavors in the final third can be tricky. It’s tough for me to tell how much of what I’m tasting is being provided by the current smoke at that exact moment versus just being a built-up sensation from the previous two hours of smoking down the Torch. There’s more leather, an underlying sweetness and a fading cardamon. Retrohales are dominated by the dry pasta—though at times it’s more bread-like—and have some sweetness. It’s a lot easier to take retrohales than the first two thirds where they were very aggressive, but I just can’t pick up the flavors like I was earlier in the cigar. Flavor is full, body is a bit weaker but still full and the strength is certainly full. One cigar requires another touch-up to help with some smoke production but the other two make it to the end, albeit with diminished smoke, without assistance from the lighter. 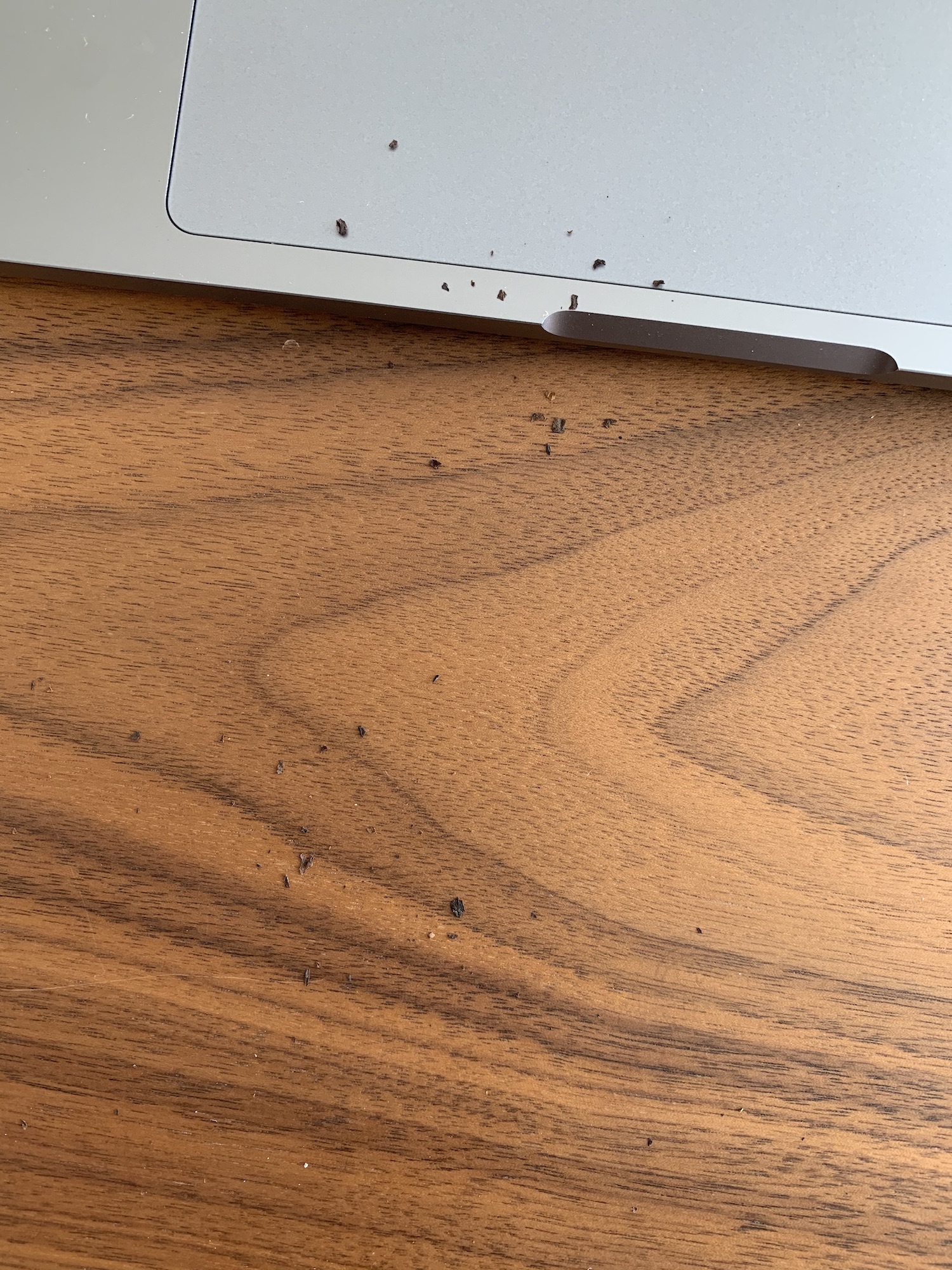 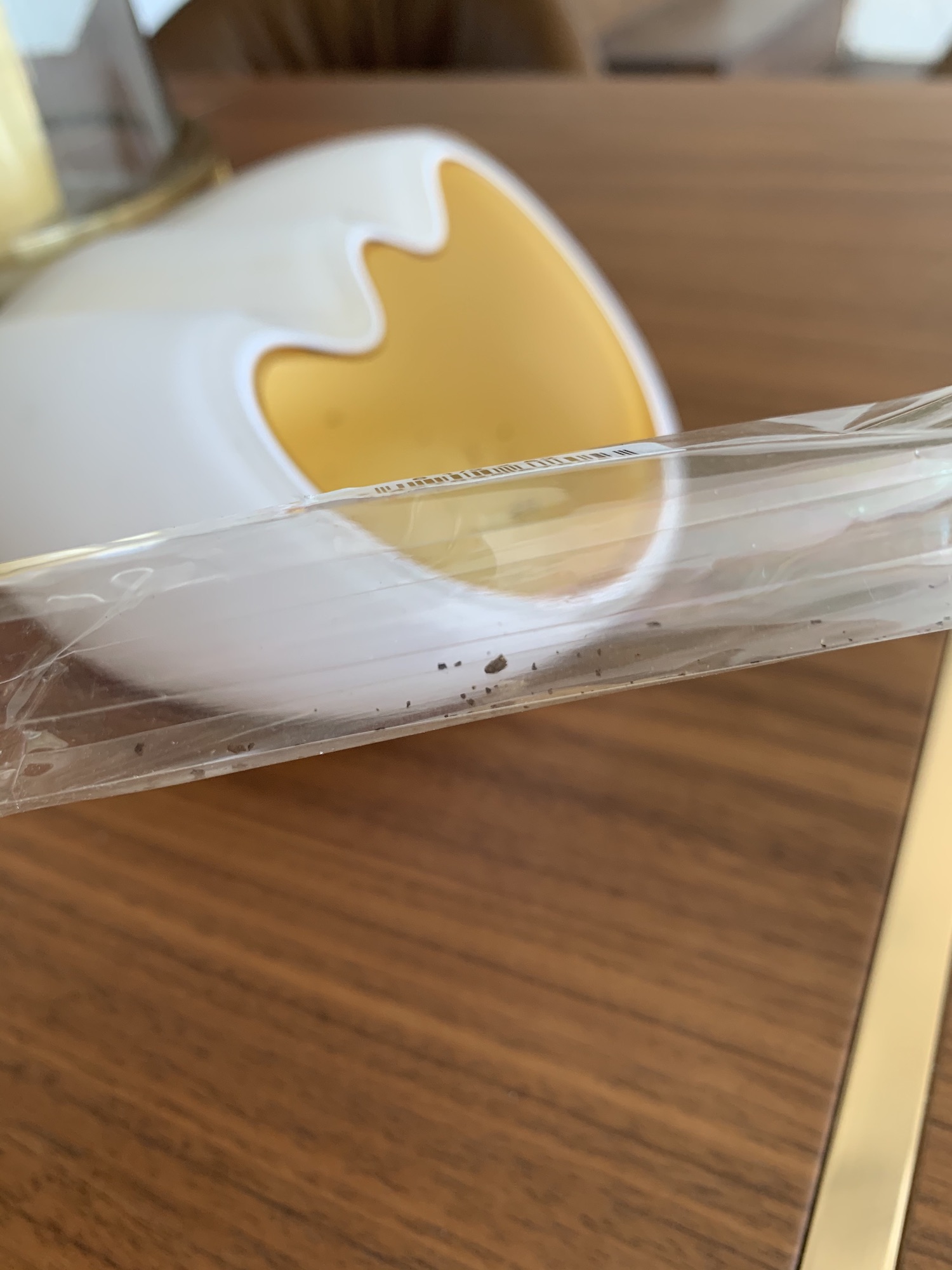 The JFR Lunatic Leaf Torch is certainly not going to make a personal list of favorite cigars of 2020. Annoyances with the mess aside, the flavor profile just doesn’t make much sense. It’s a bizarre combination of detailed flavors paired with an intense amount of acidity and sharpness. This is definitely a cigar I’m going to redux in pretty short order as I’m curious to see if things calm down a bit—particularly the acidity—with six months or so of rest. It’s not a bad cigar, but at the moment, it’s definitely not for me.