In August 2013, My Father Cigars shipped a new Jaime Garcia Reserva Especial vitola featuring an amped up profile to stores in Hawaii. Although it was named the Jaime Garcia Reserva Especial Lancero, the cigar actually featured the measurements that come closer to a corona gorda at 6 x 46. The release was limited to only 300 boxes of 10, with each cigar retailing for $7.50, although due to Hawaii’s high sales tax, consumers in that state paid about $11.25 each.

Jon Fia, who represents My Father and other brands in Hawaii, had this to say about the new release at the time:

Jaime Garcia blend but had the strength turned up more since guys in Hawaii like full bodied cigars. It was made for Hawaii retailers only instead of a singe store, kind of like a regional release. I took (the prototypes) back to Hawaii and got feedback from the retailers. We all concurred it was full bodied enough to satisfy seasoned smokers but didn’t want to make it any stronger or we might turn off the less seasoned smokers. Boxes are red with gold lettering due to the large Asian population.

In addition to the exclusive vitola, the Jaime Garcia Reserva Especial Lancero came packaged in a red box with gold type that was representative of the large Asian population that lives in Hawaii, as red is a popular color in Asian culture signifying good luck and success and is also the color of the Hawaiian royalty.

Here is what I said in my original review back in November 2013:

I have always felt that the Jaime Garcia Reserva Especial is one of the most overlooked lines in the My Father portfolio, especially for the price they sell for, but for some reason, I don’t find myself reaching for them all that often. That changes with the Jaime Garcia Reserva Especial Lancero. While not extremely complex, the flavors from this cigar jump out at you and the balance between the strength, sweet vanilla and gritty earthiness is quite evident. My Father has a winner here.

Covered in a black coffee colored wrapper, the Jaime Garcia Reserva Especial Lancero features a pigtail on top as well as a wrapper with quite a bit of tooth to it. As with the first review, the cigars are a bit firm when squeezed, but not what I would consider hard. Aroma from the wrapper is a combination of strong earth, leather, manure and sweet hay, while the cold draw brings flavors of baker’s spices, dank earth, barnyard, cinnamon and slight citrus.

Starting out, the Jaime Garcia Reserva Especial Lancero features a profile full of a significant amount of bitter dark chocolate, earth, oak, almonds and wheat, along with some sweet orange on the finish. There is some black pepper noticeable on the retrohale  along with just a touch of spice on the tongue, but neither are a major player in the profile early on. The second half sees the profile change in a major way, with a creamy leather note taking the dominant spot and the sweetness shifting from sweet orange to more of a dark berry note that combines nicely with the increasing black pepper on the retrohale. The spice on the tongue disappears after the halfway mark, but the final third adds a wonderful cinnamon note that comes out of nowhere, along with more oak and creamy almonds that stick around until the end of the cigar. 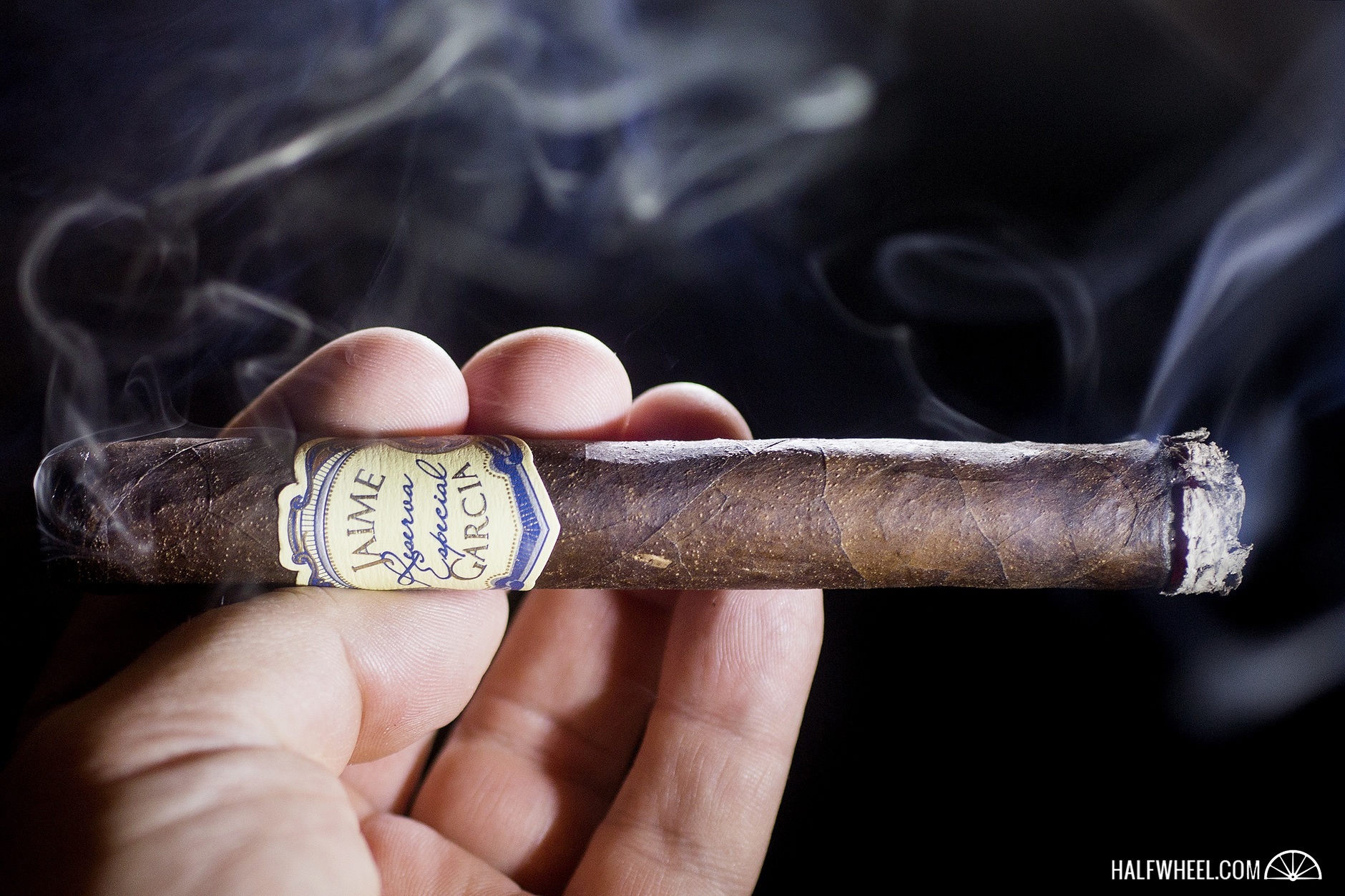 Construction-wise, Jaime Garcia Reserva Especial Lancero features a burn line that needs to be touched up a few times along with a significant amount of smoke production that never dies down. Unlike with the first review, the draw is excellent, and while the strength never threatens the full mark in any appreciable way, it is well above the medium point by the time the cigar draws to a close.

Despite the obvious vitola confusion issue, I liked the Jaime Garcia Reserva Especial Lancero the first time I smoked it, and I liked it this time around as well. Time has been good to this release, toning down a bit of the gritty earth note and giving the sweetness on the retrohale both more complexity and more distinctness. While the smoke production and draw were close to what I remember from the first review, the draw is much improved, with more resistance leading to a more enjoyable experience overall. Although I can't say I liked the Jaime Garcia Reserva Especial Lancero more after 20 months, it definitely features a different profile than when it was fresh, and that is something that I appreciate.