Cigars have been named after any number of things through the years, but the newest line from HVC Cigars gets its moniker from the grade of tobacco that it is made from.

The name of the new three-viola line is Serie A, so it is no surprise that the blend is made up of grade A tobacco sourced from AGANORSA’s Nicaraguan farms. Specifically, the blend includes a corojo 99 wrapper covering the aforementioned Nicaraguan tobacco in both the binder and filler. The regular production cigars are being rolled at Tabacos Valle de Jalapa S.A. (TABSA) in Estelí, Nicaragua.

On April 5, the first vitola for the new brand was sold in the wild during an event at Hawaii-based retailer R. Field Wine Co. In fact, the store received an exclusive vitola, a 5 x 50 robusto packaged in boxes of 10 and priced at $9.60 each. The other two regular sizes in the line—a 5 1/2 x 54 Cañonazos and a 5 5/8 x 46 Perlas—were officially launched during this year’s IPCPR Convention & Trade Show, where they were shown off before shipping to retailers in mid-July. 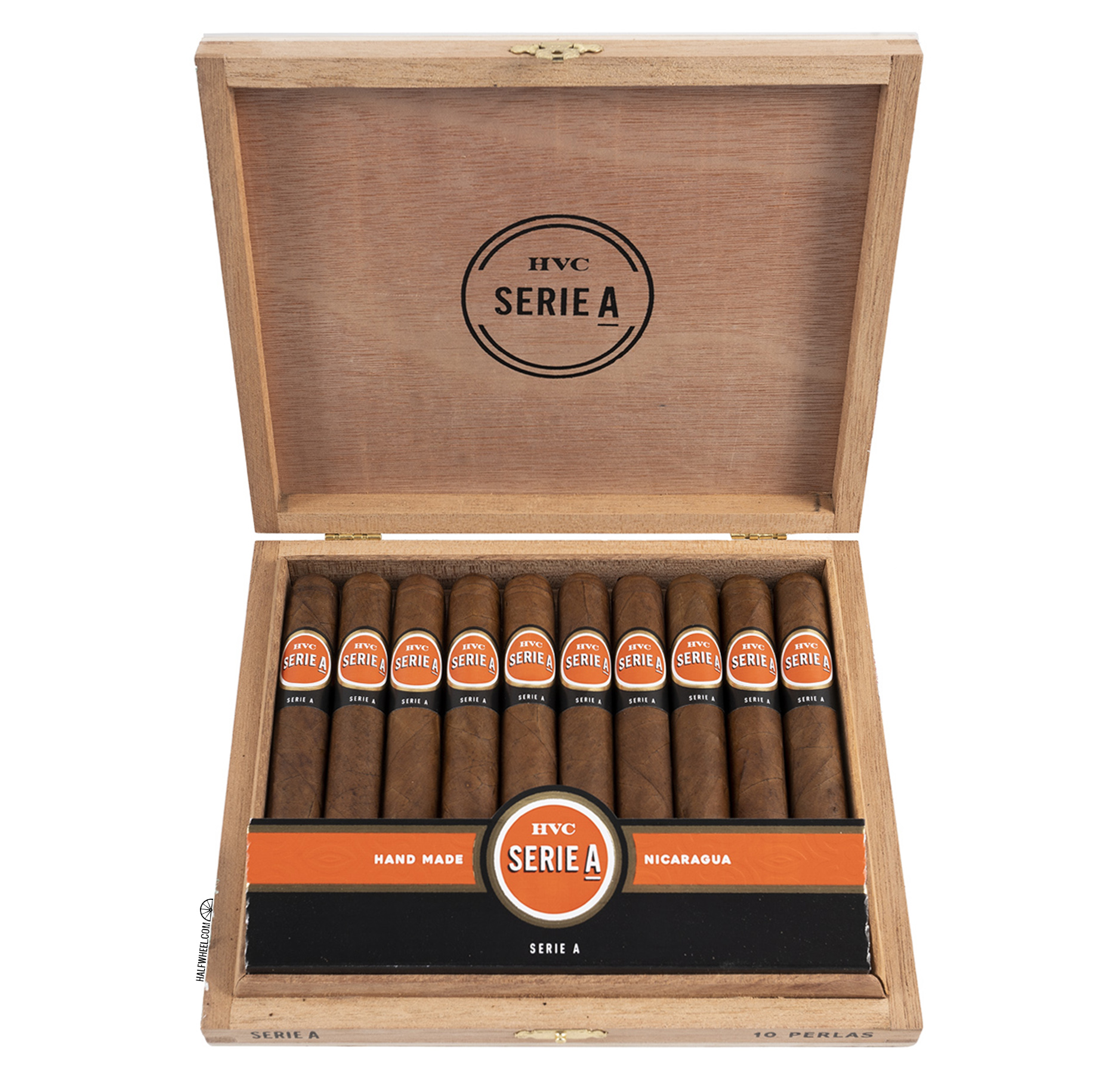 There are three vitolas in the HVC Serie A line, all packaged in boxes of 10: 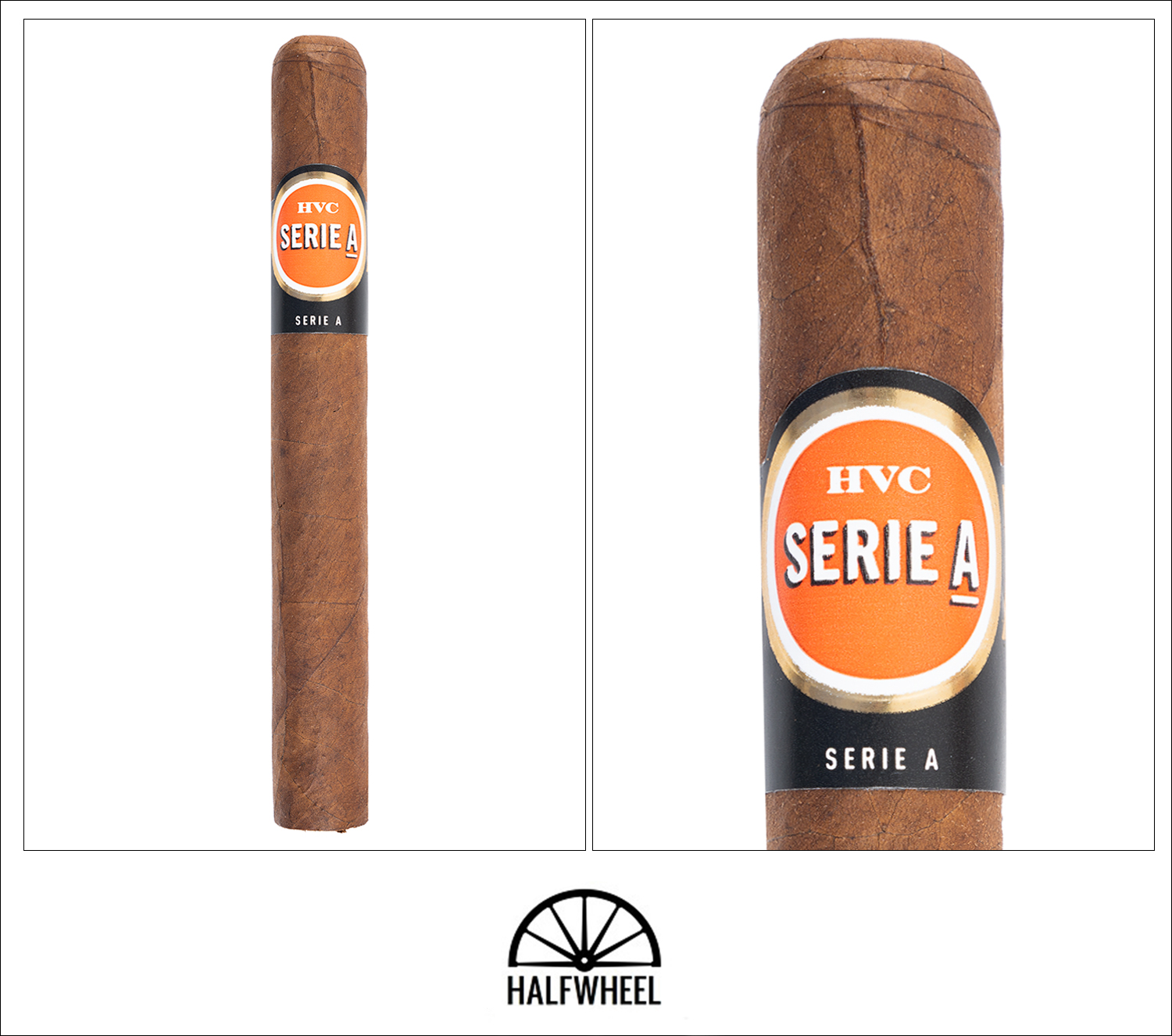 Covered in a reddish brown matte wrapper, the HVC Serie A feels quite a bit like parchment, with almost no visible oil at all. In addition, there are a number of prominent veins and it is a little on the spongy side when squeezed. Aroma from the wrapper is a combination of almonds, sweet manure, barnyard, leather, earth, cedar and slight date sweetness while the cold draw brings flavors of strong pasta, leather, earth, hay, cocoa nibs, milk chocolate sweetness and a bit of spice on my tongue.

The HVC Serie A starts out with dominant flavors of both earth and leather, interspersed with notes of creamy almonds, cedar, dark cocoa nibs, charred meat and hay, along with nice amount of black pepper and milk chocolate sweetness on the retrohale. There is a surprising amount of spice on my tongue as the first third burns down, and there is plenty of smoke flowing from the foot. Construction-wise, the burn is a bit jagged and needs to be touched up once, but never seems out of control, while the draw is excellent so far after a straight cut. In terms of strength, the HVC starts out fairly mild, slowly building to reach a point between that and medium by the end of first third. A massive shift happens to the profile during the second third of the Serie A Perlas, as a massive charred mesquite note takes over the dominant spot, followed other flavors of leather, nuts, toast, cinnamon and dark chocolate. The milk sweetness from the first third has also changed, morphing into more of a maple note by the halfway point, while the spice on my tongue from the first third has actually increased. Thankfully, the burn has evened up nicely while the draw continues to be excellent and the smoke keeps pouring off of the foot like a house on fire. Strength-wise, the HVC seems content to remain at a point close to the medium mark as the second third comes to a close. The smoky mesquite flavor remains the dominant flavor through the final third of the HVC Serie A, followed closely by notes of earth, cinnamon, dark cocoa, leather, espresso beans and hay. While the maple sweetness continues down its path pretty much unchanged and combines nicely with the slight black pepper that is still present on the retrohale. Both the burn and draw continue to give me no problems at all and the strength does reach a solid medium just as the final third ends. Although it does take about a third of the cigar to get going, when it hits its stride the HVC Serie A Perlas shows off a flavor-filled profile that was quite enjoyable. While only just barely noticeable in the first third, the second and final thirds are full of a combination of smoky mesquite on the palate, spice on the tongue and slight black pepper combined with maple sweetness on the retrohale that reminds me strongly of standing in line at a barbecue place here in Texas. Construction was decent overall—I did have to touch up each sample at least once, but the burn was never really in danger of getting out of control—and the solid medium strength was extremely well-balanced throughout. I have been a fan of quite a few of HVC's creations and the the Serie A Perlas easily continues that tradition.