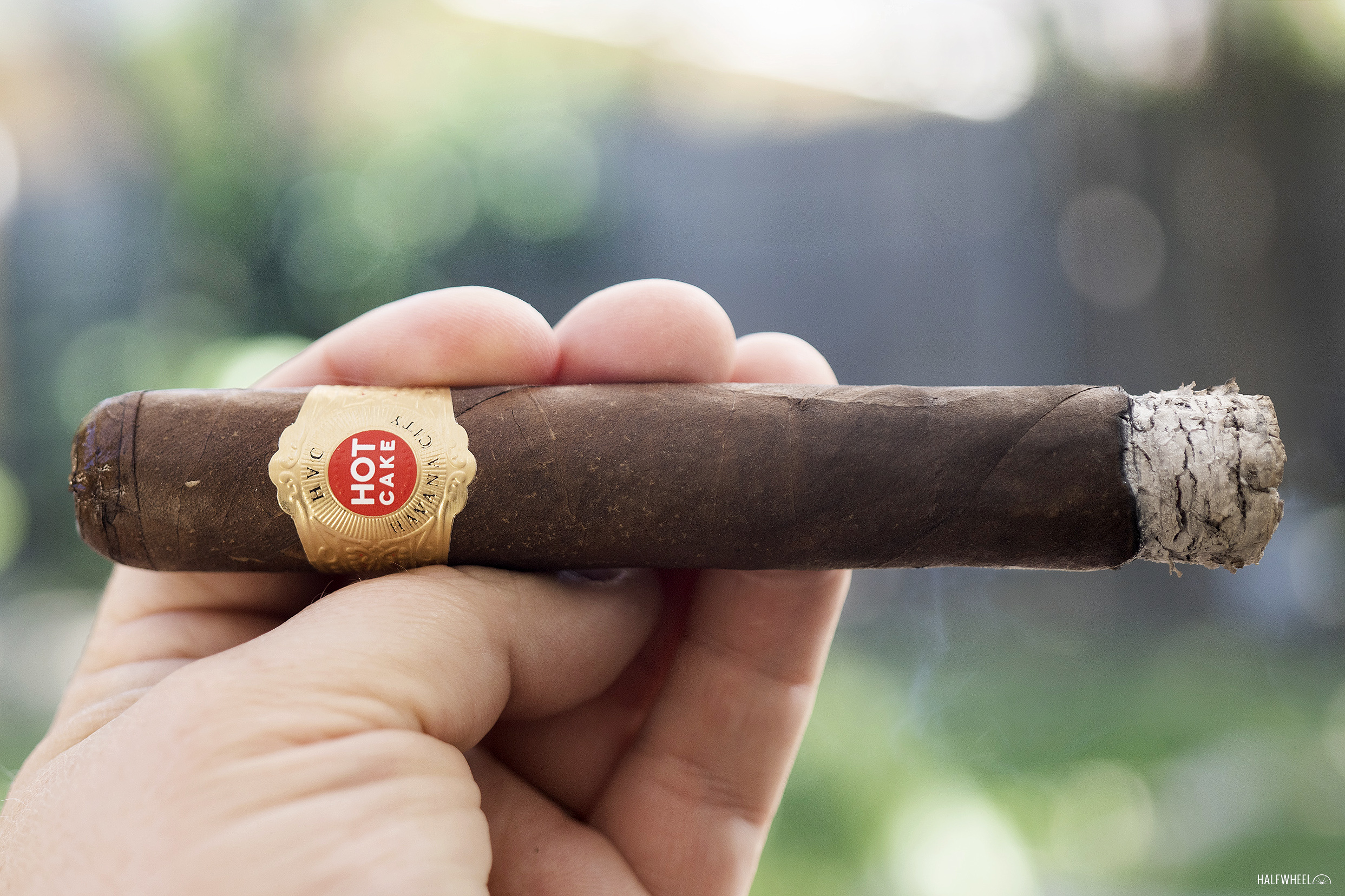 In July 2020, HVC Cigars announced a follow-up line to its Pan Caliente, a limited edition release that debuted in 2016. The HVC Hot Cake, is a regular production line that debuted in three vitolas and is produced at the Tabacos Valle de Jalapa S.A. factory in Estelí, Nicaragua.

During the 2021 PCA Convention & Trade Show, HVC introduced a brand new vitola in the Hot Cake line, which incidentally was also the first 60 ring gauge cigar released by the company. Named Gran Cañon—which translates to Grand Canyon from Spanish—the 6 x 60 vitola is priced at $11 each and is packaged in boxes of 25.

“The cigar will carry a secondary band in the foot of the cigar with the number 60 plus Gran Cañon name, to me it’s a big cigar, what looks normal today in the market,” said Reinier Lorenzo, founder of HVC, in a press release.

As is the case with the rest of the Hot Cake line, the Gran Cañon is made up of a Mexican San Andrés wrapper covering Nicaraguan tobacco used in both the binder and filler. The newest vitola in the Hot Cake line started shipping to retailers in July 2021.

There are now four different vitolas in the Hot Cake line. 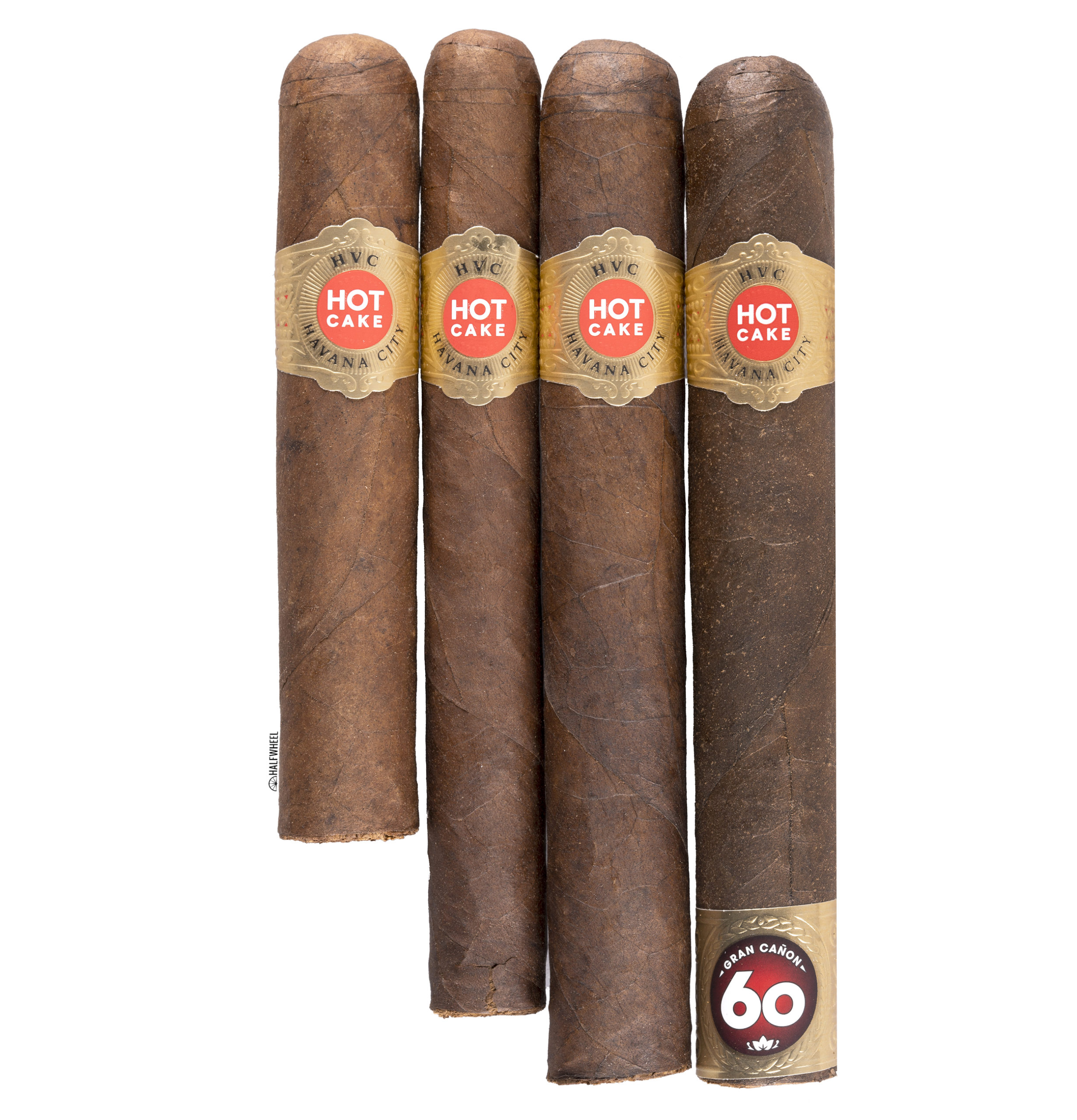 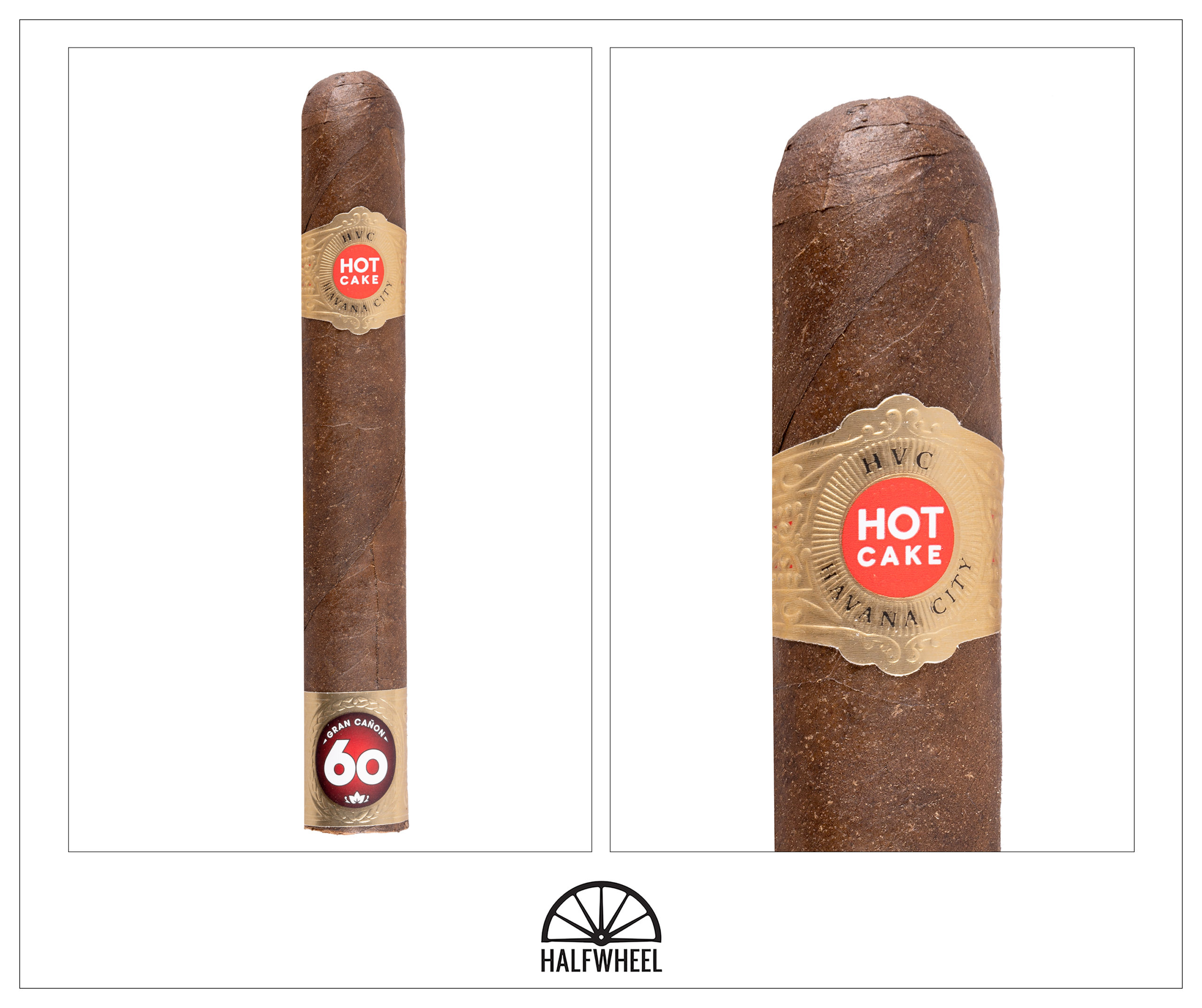 Covered in an extremely dark espresso brown wrapper that is sandpaper rough to the touch, the HVC Hot Cake Gran Cañon has plenty of overtly noticeable veins running up and down its length. However, there is also very little oil to be seen and the cigar is very close to rock hard when squeezed. The aroma from the wrapper is a combination of cedar, barnyard, leather and hay, while the foot brings notes of creamy nuts, cocoa nibs, leather and sweet manure. Finally, the cold draw features flavors of creamy cashews, gritty earth, bitter dark chocolate, cedar and roasted coffee beans, along with some generic sweetness.

Although notes of anise and spice start out the profile just after the foot is toasted, both quickly recede, allowing main notes of both creamy cedar and cashews to take the top spots. Additional flavors of roasted coffee beans, cocoa nibs, hay, sourdough bread, leather and slight floral flit in and out, while the retrohale features notes of both white pepper and graham cracker sweetness, both of which seem to be getting a bit stronger as the burn line progresses. Both the burn and the draw are excellent so far, with neither giving me any issues, while the smoke production is massive off of the foot. Flavor is medium-full, body is a mild-medium and the strength ends the first third firmly between the mild and medium marks.

While both the white pepper and the graham cracker sweetness on the retrohale increase in strength during the second third of the Hot Cake Gran Cañon, the main flavors in the profile continue to be the same creamy cedar and cashews notes that were so prevalent in the first third. Secondary notes of cinnamon, sourdough bread, earth, hay, leather, espresso beans and cocoa nibs are present at various points, while some mineral saltiness has shown up on my lips for the first time. Construction-wise, both the burn and the draw continue to impress, and the smoke production continues to flow off of the foot like a house on fire. Flavor remains medium-full, while the body increases a bit to hit a solid medium and the strength comes very close to passing the medium mark as the second third comes to a close. 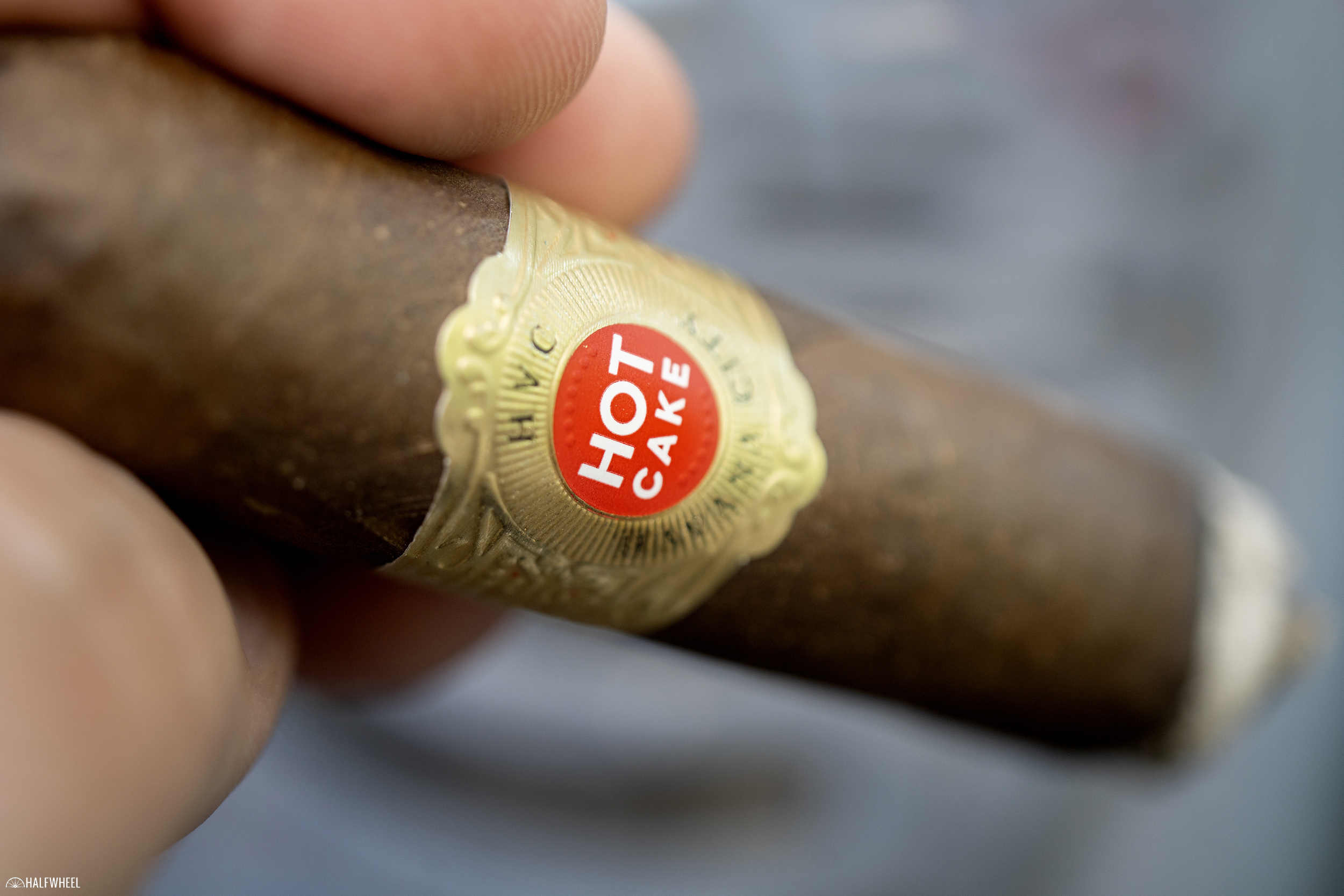 Unfortunately, there are very few changes for the HVC Gran Cañon during the final third, with the very familiar combination of cashews and cedar easily taking the top spots in the profile once again. In addition, flavors of hay, cocoa nibs, espresso beans, earth, cinnamon and a touch of leather tack are present but the saltiness on my lips from the second third is long gone, never to return. Both the white pepper and graham cracker sweetness stay the course on the retrohale as well, although the latter note seems to be just a bit more distinct as the burn line progresses to the end of the cigar. Although the burn becomes problematic enough to need correction with my lighter—albeit just once—the draw remains excellent, while the smoke production shows no signs of diminishing. Finally, flavor ends medium-full, body remains at a solid medium and the strength stalls just after crossing into the medium range. 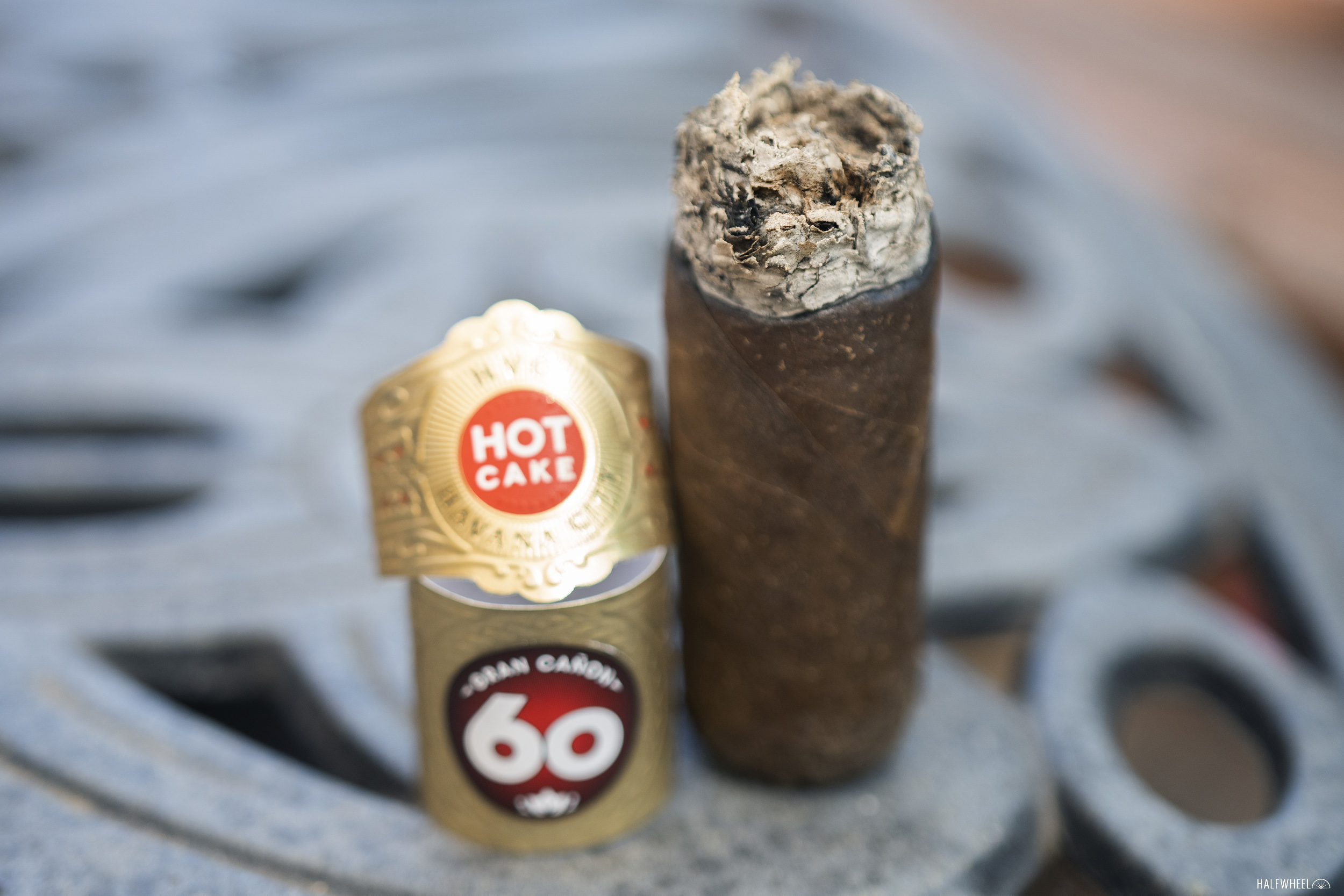 Smooth and balanced, the HVC Hot Cake Gran Cañon has quite a bit going for it. After smoking three samples, I could easily name it as one of the most consistent blends I have smoked in a long time, as all three were virtually the same profile-wise. In some ways this is a good thing—since you will know almost exactly what you are going to get when you sit down to smoke one—but on the other hand, there is very little deviation for those looking for transitions. In addition, the profile does get noticeably linear in the final third, a fact that is not helped by the combination of length and large ring gauge. In the end, the Gran Cañon may be far from HVC’s best release, but it is easily enjoyable enough to add to my list of releases to smoke when I want a 60 ring gauge cigar, and it is easily good enough for me to encourage fans of the vitola to try for themselves.