The four vitola line features a seven-year-old Connecticut broadleaf maduro from Universal’s Lancaster Leaf. That sits on top of binders from Jalapa, Nicaragua and another from Ecuador. Underneath, there’s criollo 98 from Condega, Nicaragua and Dominican corojo 2006 leaf that PDR Cigars founder Abe Flores said he grew your years ago. 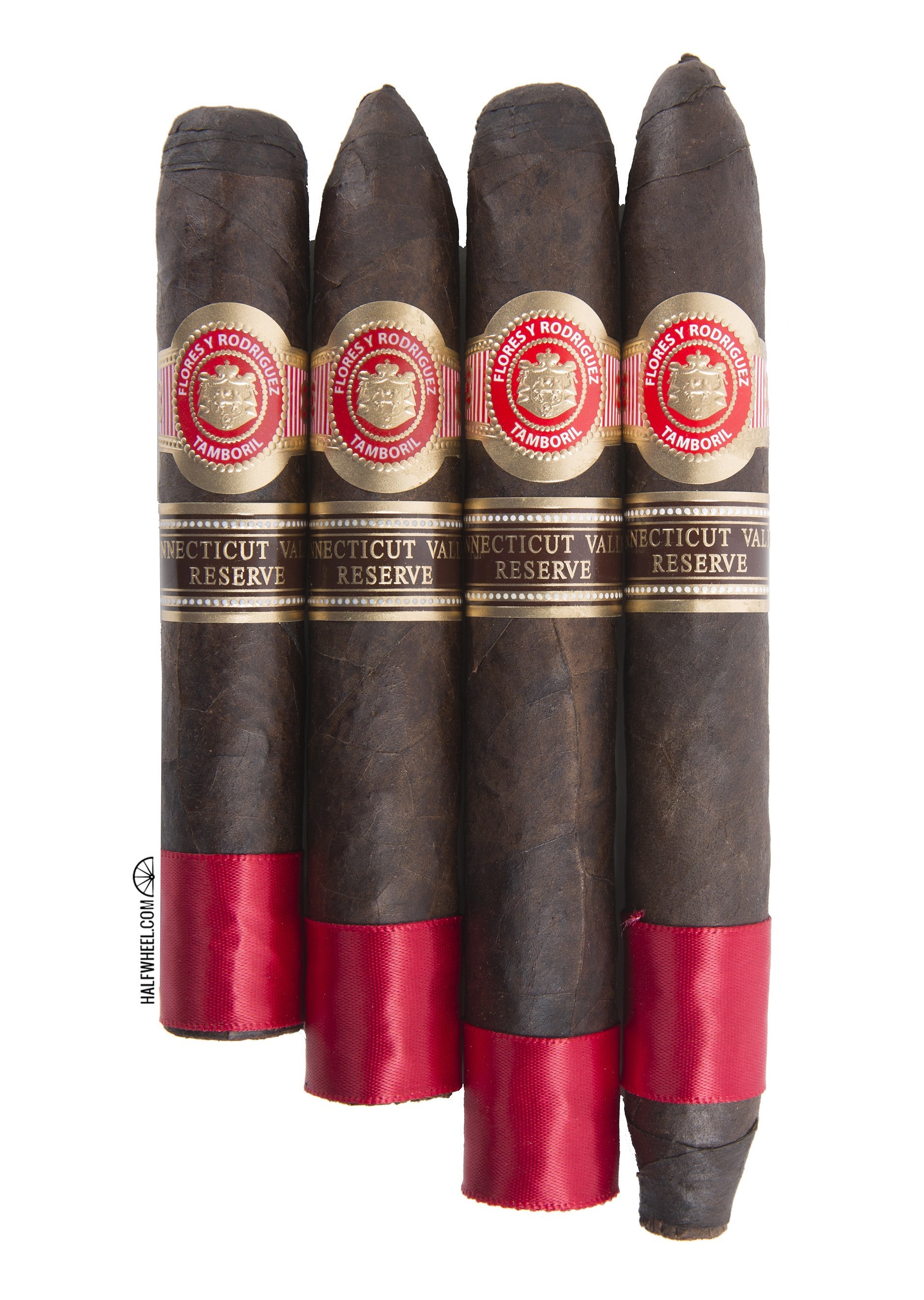 With the higher price, comes bolder packaging. For this, PDR went with super wide boxes with a single row of 15 cigars. It’s dark broadleaf, contrasted nicely by a main that looks somewhat like a cross between Punch and Saint Luis Rey. Below is a secondary band with a main color similar to the wrapper and a red ribbon on the foot. While the cigars are packaged in cellophane, my samples are missing the cellophane and as such, there’s not much beyond some very mild barnyard from the broadleaf wrapper. The foot provides quite a bit more flavor: gingerbread, a touch of earthiness and some saltiness. There’s cinnamon, black pepper and watercress.

The Connecticut Valley Reserve starts with some pepper, earthiness, semisweet meatiness and some charcoal and coffee towards the back end. Smoke production is fantastic and the initial draws are easy with an average amount of resistance. I wouldn’t describe it as a typical broadleaf experience: there’s oak, cedar, saltiness some grassiness, earthiness and a bit of harshness. Through the nose, I pick up watercress, lemon, some buckwheat noodles and a bit of the charcoal. I’d peg the flavor as medium-full with medium body and strength. The PDR is burning slowly, but construction-wise, there’s nothing to complain about: lots of smoke, even burn and a great draw. Before the second third begins, the harshness was almost gone, and by the time the second third starts, it’s left completely. As for the rest of the flavor, there’s coffee grounds, vanilla, lots of barnyard and some sourness. Like the first third the finish continues to provide some nice additions: peanut shell, white pepper and some pretzel. At the midway point, a vanilla concentrate appears on the finish: it’s quite detailed and the first time that sweetness really plays a significant part of the flavor profile of the Flores y Rodriguez Connecticut Valley Reserve Belicoso. Flavor is still medium-full and the body and strength remain medium. Also similar is the construction, still great, although it’s burning a bit quicker. The Connecticut Valley Reserve’s final third sees a creaminess enter the profile and manages to play a large role. It really just adds itself to the profile of the second third and there’s not many other changes. The coffee grounds become more acidic and the pretzel note replaces the pretzel. With less than an inch left, there’s more black pepper and a generic saltiness on the back. Some citrus adds itself into the PDR’s profile, but it disappears quite quickly if I push the cigar a bit. There are a couple noted factories where I struggle to find cigars that really do much for me, PDR Cigars is one of them. The Flores y Rodriguez Connecticut Valley Reserve has some distinct flavors that I really enjoyed, but at times they were lost in a mixture of earthiness and barnyard, oftentimes drowning out the other flavors. I suspect that those who are fans of PDR will find a lot to like about this cigar, as it’s certainly one of—if not the—the most complex cigars I’ve had from the factory. For me, it’s a PDR that I’ll gladly smoke again, although I’m still looking for a PDR to blow me away.