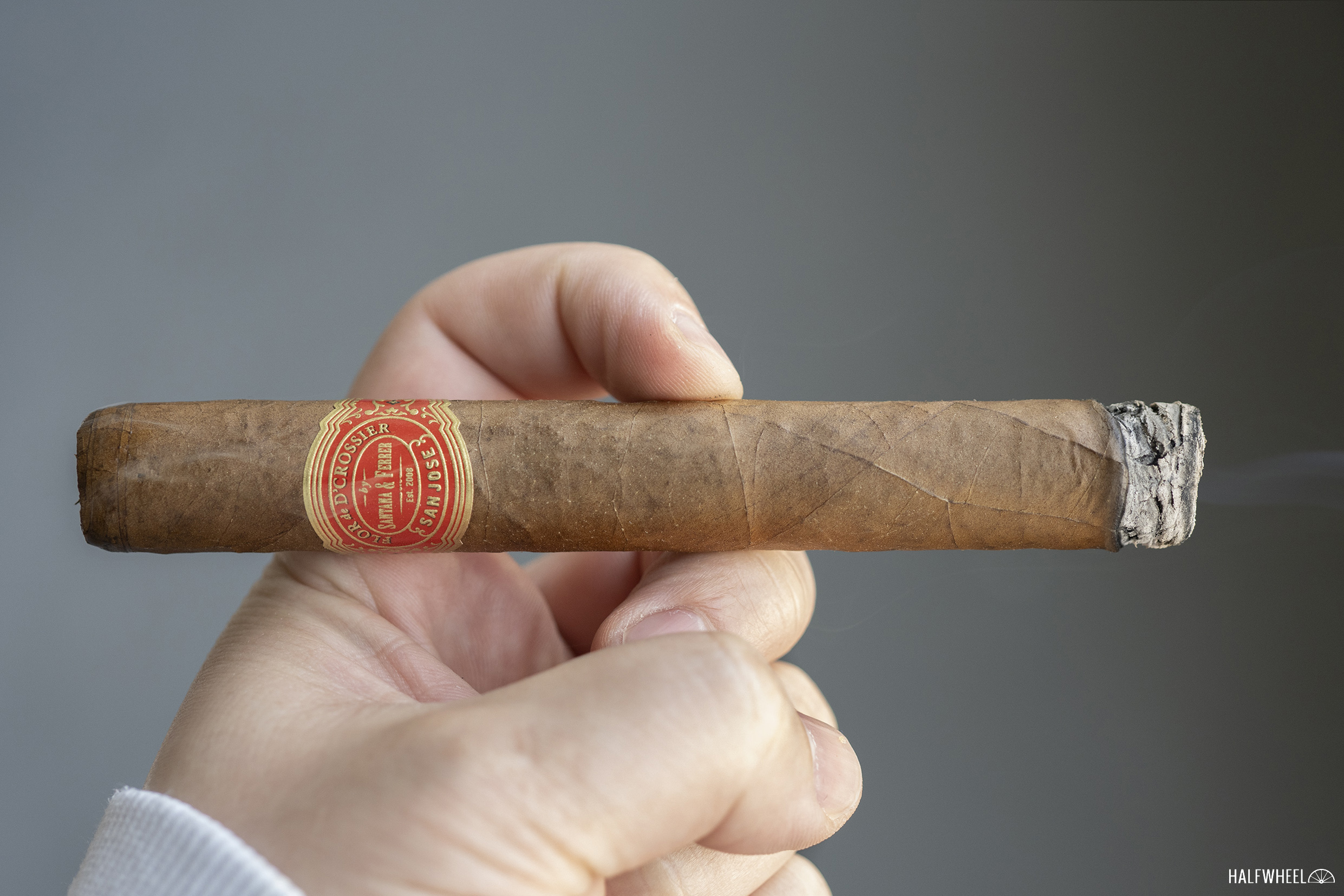 A couple of weeks ago I was doing some reorganization of halfwheel’s office humidors in an effort to consolidate half-opened boxes and create some free space. As is often the case when doing so, I ran across many cigars that I hadn’t thought of in quite some time. 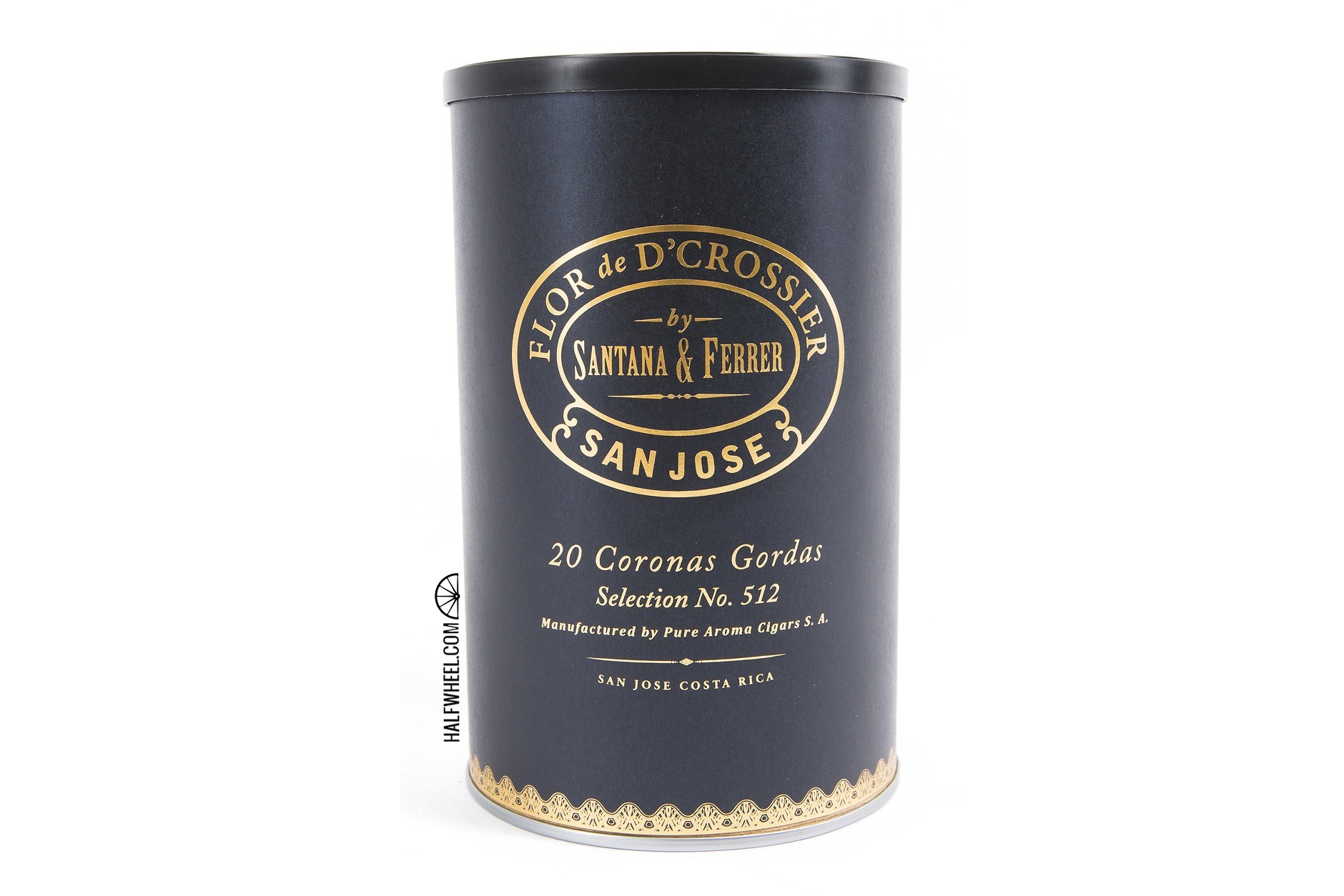 One of them—and one which wasn’t in a box per se—was the Flor de D’Crossier Selection No. 512 Corona Gorda. It’s a 2015 release that I most remember for its unique packaging, having shipped in cardboard canisters that featured a pop-open lid akin to the one found on some canned foods.

As for the cigar, it was introduced alongside six other sizes of Flor de D’Crossier Selection No. 512. The cigars—with the exception of the lancero—use an Ecuadorian habano wrapper over a Costa Rican Sumatran binder and filler tobaccos from Costa Rica and the Dominican Republic.

I’m typically a fan of most D’Crossier cigars, though I’d be lying if I remembered anything about this specific cigar, including who had done the review. As it turns out, I reviewed the cigar in August 2015, here’s what I said at the time:

I was originally under the impression that opening the can and letting it sit in a humidor for a few days would be helpful, as the cigars were a bit wet. While that was definitely a start, there was noticeable difference between cigars smoked after seven days and those smoked closer to two weeks after opening. The cigars smoked earlier were definitely wet and showed issues both flavor and burn-wise after the midway points. That being said, once the D’Crossier 512 had a bit of rest, it proved this wasn’t just a cigar about packaging. It’s a unique cigar, most certainly not for everyone, but one that I found enjoyable once it dried out. D’Crossier adds two small cut-outs to the cellophane, slightly smaller than a Tic-Tac that are designed to increase the breathability. Without doing some side-by-side testing, I’m not sure what effect this has on aging. The cellophane itself is slightly discolored, but more of a dulling of the clearness rather than a yellowing. As for the cigar’s appearance, the Flor de D’Crossier Selection No. 512 has plenty of oils on the surface of the wrapper, though I’m not sure what to make of the veins. The top 60 percent of the cigar looks like one type of tobacco and the bottom 40 percent has a completely different vein structure. As for the aroma, I can’t identify much as it’s quite mild, but there’s some leather with acidity. The foot is a very different story, it’s medium-full and bursting of scents. There’s a dominant bubble gum-like aroma in front of woody flavors and leather. If you like sweet, floral flavors, this is a great start. This continues with the cold draw which has more of those bubble gum flavors on top of woodiness, chartreuse and some weird saltiness. This time there are more floral flavors to join the bubble gum, but it’s a very similar sensation.

I’m not terribly surprised that once lit, the Flor de D’Crossier Selection No. 512 fails to provide the same level of sweetness as the pre-light process delivered, but I’m a bit surprised that there’s zero sweetness. It’s not a bad start—a very crisp profile with bread, oak and meatiness. As the first third develops, the crispness reduces a bit, though it’s still a pretty developed profile. There are flavors of bread, earthiness, creaminess and white pepper. It finishes both sweeter and sourer than when the smoke is in my mouth, there’s still creaminess and white pepper, but there’s also a tiny bit of harshness. Retrohales provide the familiar floral flavors alongside meatiness, creaminess and some salty flavors. The bread flavor reappears after the smoke leaves my nostrils, joined by some toastiness and a bit more harshness. Flavor is full, body is medium and strength is medium. As the cigar progresses, I feel like something is missing in the center of the profile. My palate picks up the profile building, but it seems to stall out in continuing to develop and add more flavors quicker than most cigars. That being said, construction is excellent. 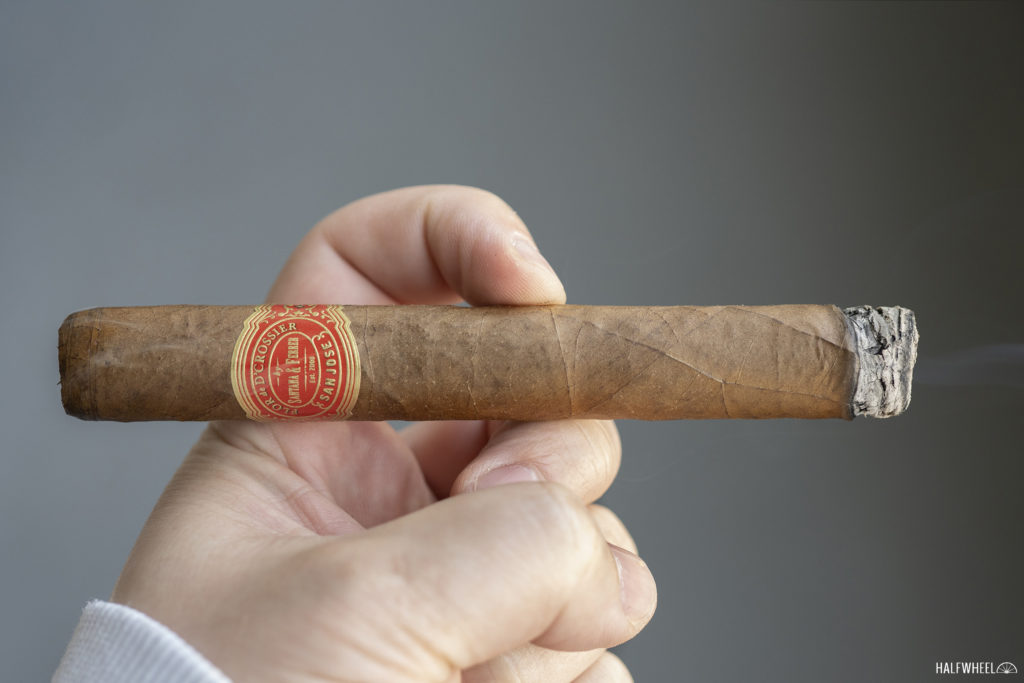 Fortunately, what little harshness that was present during the first third is gone in the second third. There’s still lots of bread flavors, now more of a classic white sandwich bread flavor, joined by some creaminess. The finish is similar—both to the first third and the main flavors in the second third—white bread, creaminess, white pepper and a building nuttiness. Flavor intensity picks up and gets closer to full, but the body and strength are both medium. Construction remains impeccable as I pass the midway point. That building nuttiness eventually shows itself to be a rich peanut flavor in the final third. It’s joined by some toastiness, a familiar bit of harshness and a subtle flavor that reminds me of the taste of a half-drank bottle of water that got left out in a hot car for a week or so. The finish has nuttiness and, seemingly out of nowhere with about two inches left, a lot of barbecue sauce. Eventually, the barbecue sauce leaves and I pick up something that is somewhere between a bread flavor and French fries. Retrohales are quite similar as before: nuttiness and creaminess dominate with some spices in the background. The finish of the retrohale is a bit more washed out than the rest of the profile to this point. It’s a bit sourer, though I find some of the floral flavors and the aforementioned bottled water sensation. Flavor drops off a bit to finish medium-full, body and strength are getting closer to mild-medium as I finish the cigar.

This is a case where I enjoyed the scents and flavors the cigar provided before it was lit more than the flavors I found while smoking the cigar. All of the vibrant floral and bubblegum sweetness that was present before my lighter did its job were largely absent once the Flor de D'Crossier Selection No. 512 Corona Gorda was lit. What’s left is a flavor profile that seemed slightly hollow. It was far from flavorless, but it seemed like the middle parts of the profile just skipped a beat or two. I’d gladly smoke another one, but I wouldn’t recommend buying more with the intention of aging these cigars for six years, as the cigar tasted better fresh than it does now.