Wednesday night wrapped up on a much tamer note than Monday did, with an elegant dinner in one of the halls at the El Laguito cigar factory celebrating the 25th anniversary of La Casa del Habano, the franchised store that carries Habanos S.A. cigars exclusively. It was a night that seemed to have a bit of a Beatles theme with what appeared to be an Abbey Road motif at the entry and featured a performance of “Hey Jude” before turning to music from Mexico and Cuba for most of the evening.  The brand new Ron Havana Club Cohiba Atmosphere Union had its formal unveiling and tasting, while the 20 founding La Casa del Habano franchisees were honored at the conclusion of the event.

Onto Thursday, with a visit to the La Corona and H. Upmann factories to begin the day. Logistics can be a bit of a challenge in Havana, especially when it comes to getting on the right bus to start your day. With people scattered all over the city, some groups organize their own transportation, while there’s also supposed to be some busses that the Festival employs to circulate between events and major hotels. I was told that there’d be a bus stopping by my hotel this morning that I could jump on, but the only one that showed up was employed by a group of Russian attendees, but they were nice enough to let me and another photographer share the ride. Touring cigar factories isn’t what it used to be, at least what it was when I was here for the first time five years ago. While I was eager and excited to see the Partagás factory on that first visit, my desire to tour another factory has decreased over the years, especially as part of a large group of people who might have never seen one before. Nevertheless, to be able to step inside two factories in a matter of hours was hard to turn down, especially since it has become much harder to get inside Cuban factories without some sort of special invitation. The first stop was La Corona, a.k.a. Miguel Fernandez Roig, home to one of this week’s featured brands, Romeo y Julieta, as well as Ramon Allones, Punch, Hoyo de Monterrey, Por Larrañaga, Diplomaticos and what appeared to be some Cohiba, at least judging from the boxes I saw being packed. I hesitate to call it a particularly nice factory; it’s functional, certainly, and in line with others that I have seen both on and off the island. The group I tagged along with got the usual tour: leaf sorting and stripping, rolling, banding, packing, etc. We weren’t able to see the aging or blending rooms, and I’m sure there was a good bit more that was off-limits. From there it was onto H. Upmann, which is where this week’s other featured brand, Montecristo, is made, along with Bolivar, H. Upmann, and at least some Bolívar, Partagás, Vegas Robaina and Cohiba, again judging from the boxes I saw being packed.

It was the same basic tour though this factory included one of the lectors who was part of the presentation earlier this week, Grisel Valdés. She happened to have a copy of the Granma newspaper on her desk, which I asked to look at to check the baseball scores, in particular to see how the Vegueros from Pínar del Río did against Havana’s Industriales yesterday. She seemed to remember me from our brief chat after the seminar and made a special announcement that the galera had a visitor from the United States, and then proceeded to inform them that I was a fan of the Vegueros and that they got crushed by Industriales 14-4, which earned me a good bit of friendly trash-talking from some of the rollers. Industriales fans are like Yankees fans—if you’re in Havana you simply don’t root for anyone else, and you make it a point to remind other fans of how many championships the big city team has won. If you’re wondering, yes, I was offered to buy cigars while inside the factory, as a man in the packaging room plucked a box of Romeo y Julietas out from under a t-shirt to gauge my interest. I passed on the offer, but a similar one happened in a smaller room towards the back of the packaging room with some festival attendees picking up some sticks. I instead headed for the store attached to the factory, which was well stocked with current cigars but light on single sticks and brand diversity. It’s not a bad store to stop by, especially if you can grab a seat in the back lounge, but like clockwork another tour bus will roll up and dump a group of tourists off, making the cozy retail space cramped and loud, with only one register to accommodate the crush. The festival made its way back to the Palacio de Convenciones for an afternoon session, with the trade show floor still busy and two master lectures on the docket: Habanos and the Arts, focusing on the work of French artist David Kessel, who often uses cigar themes in his work; and then “The Perfect Puff,” which was to be followed by a longest ash contest, which featured the San Cristobal de La Habana El Morro, a 178mm (7 inches) x 48 cigar that the Habanos executive leading the event said should take approximately 45 minutes to smoke. While that elicited a few chuckles from some in the crowd—myself included—a number of people flew through their cigars with cigars that were the literal definition of finger-burners.

For those not competing in the competition, there were a handful of events happening under the name “Habanos Moments,” which paired cigars with a variety of spirits and more Chianti wine. Reflecting a bit on the week so far, one thing that I have yet to see is the new 2015 Edición Limitadas, and I have heard some chatter that while they have been announced via 2015 price lists, there is a lack of wrapper to actually make the cigars. They are nowhere to be found at Habanos S.A.’s booth, and a few people I’ve talked to have confirmed the wrapper story, though Habanos S.A. is yet to confirm that. 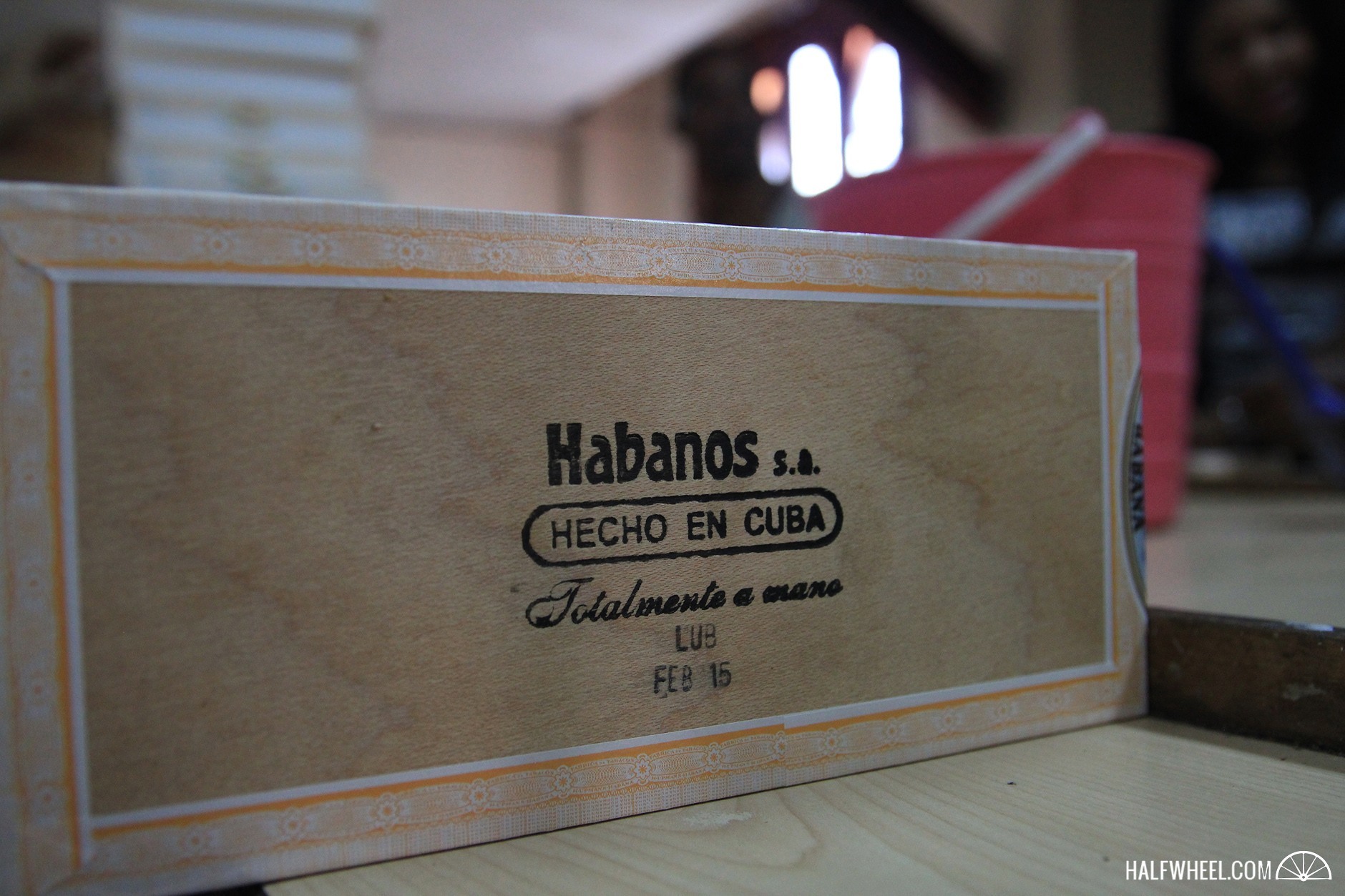 With the night free, I’m headed back into the city to stop by a few more cigar stores to see if I can find any gems, which for the most part have been few and far between. Most of what is on shelves now is late 2013 or 2014 box dates, with plenty available of recent smokes, and just a handful to be found with dates earlier than that. I did stumble across some open boxes from 2008 at the La Casa del Habano at Club Habana the other day, and look forward to smoking those later on during this trip. It’s a bit of a shame that most of the cigars are so young, as the flavors simply don’t shine across the board and come across as muddy and mumbling for the most part. At the moment of writing this, I’m listening to the Habanos and the Arts presentation while smoking a 2014 Cohiba Píramides Extra and the flavors are simply too harsh and muddled to be really enjoyable.

After that, it’ll be off to meet up with a friend of mine from Havana for dinner and conversation about things in Havana besides the cigar industry. It’s an interesting time here—as the recent developments between the United States and Cuba have been a topic of several discussions, though on the street it is hard to figure out exactly how much if affects the day-to-day life of most Havana residents. I can tell you that the hotels are full with tourists of all nationalities, with the historic central part of the city known as Habana Vieja effectively sold out. There are an endless stream of tour busses on the road, and drive-bys of the common tourist stops always have several busses and groups out front.

I find myself constantly looking out the window as I’ve been driven around the city, seeing positive signs such as fresh coats of paint being put on some houses and buildings, good crowds at restaurants and a busy city center. Yet I still wonder if there is enough paint in the world to give this country the face lift it so badly needs and these people deserve, let alone concrete and rebar to rebuild and stabilize the city’s historic buildings. It’s certainly an interesting time to be here, and a reminder that things are changing little by little in advance of what could be a sweeping change before long. There’s a lot more to this beautiful country than cigars and rum, and while I’m here because of the former, I’m much more intrigued by the latter.