Founded in 1976 by Alain Berda, Elie Bleu is well known for its amazing creations in the humidor market, including the $200,000 Cohiba 50 Aniversario humidor, which took the top spot in halfwheel’s 2016 Packaging Awards. The Paris-based company had produced a limited number of cigar accessories almost 15 years ago—its first double-bladed guillotine cutter was released in 2004 and carried a price of about $90—but decided to expand that product offering significantly in 2016.

That was the year the company celebrated its 40th anniversary by showing off six new regular production Japanese-made aluminum cutters during the IPCPR Convention & Trade Show. Appropriately named the Elie Bleu Double Blade Cigar Cutter—or EBC-1 depending on which naming scheme the company is using—the cutter features two v-shaped blades that form a square shape when partially opened to mimic the company’s logo. During the next year’s 2017 IPCPR Convention & Trade Show, Elie Bleu expanded its cutter line with two new finishes: one was dubbed Espresso, while the subject of today’s review was given the somewhat confusing name of Elie Bleu, basically a striking metallic blue that is meant to pay homage to the company’s signature blue color it is known for.

While the color of the Elie Bleu is different, the cutter is identical to previous versions: a body and internal system made of stainless steel covering Japanese tempered surgical stainless steel blades. Able to cut cigars up to 52 ring gauge, this cutter retails for approximately $200.

Although it may look a bit different visually, the operation of the Elie Bleu is fairly routine for a double-bladed guillotine cutter: you place your fingers in the two holes provided and pull your fingers apart, thus pulling both blades independently along tracks and allowing the hole to open up. You then put the cap of the cigar in the opening and push the sides together again, which forces the blades to cut through the cap until they come to the end of their journey with an audible click.

Right away, there was a number of small issues that became noticeable from virtually the first time I used the cutter: first, the blades are extremely stiff, so much so that it was actually somewhat of a chore to open them; and second, my fingers are so far apart when they are in the holes that it is almost annoying to use, although this issue may be not as problematic for someone with smaller hands than I have.

In terms of the actual cuts, the Elie Bleu Double Blade Cigar Cutter fairs a bit better, slicing through caps with relative ease, albeit not as cleanly as I was expecting. In fact, in a surprising number of uses, I was left with small pieces of tobacco that came in my mouth, small “hills” on the cap, or both. While neither issue was bad enough to be overly problematic, they happened enough that I am putting it down as features of the cutter as opposed to outliers.

After using the cutter on just about every cigar I smoked for close to two months, the end result was a bit of a mixed bag. While the blades did loosen up a bit overall, they remained stiff enough to make the cutter mildly annoying to open, and the blades did not become obviously less sharp, meaning the cuts did not degrade noticeably over time. 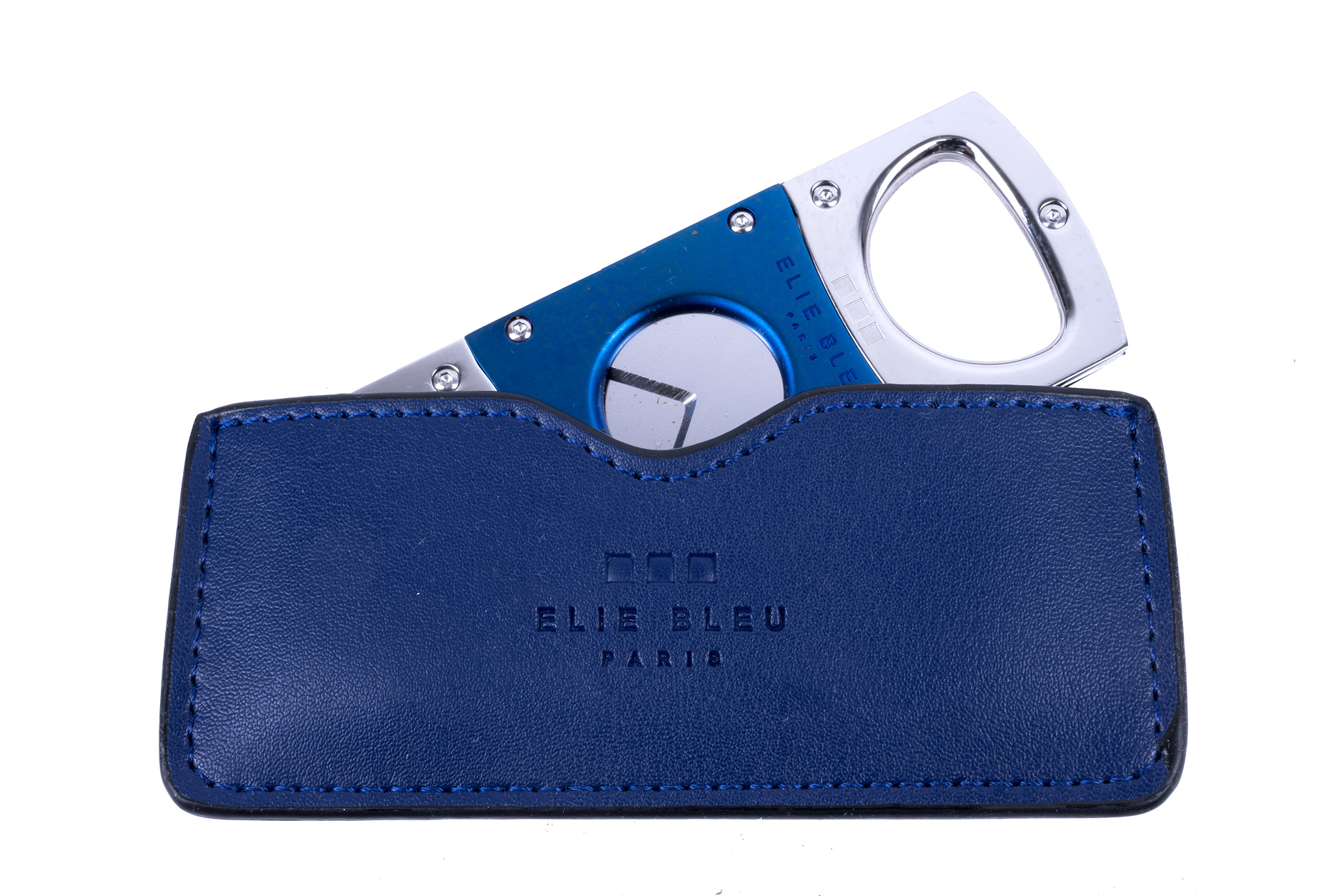 Double-bladed guillotine cutters are a dime a dozen, but guillotine cutters in the same price range as the Elie Bleu are quite a bit more rare, and there are none that I know of on the market that feature the same square blade opening. In terms of quality of build to price ratio, I would say the Davidoff Double Blade Cutter ($330) would be a contender, although that example actually cuts cigars quite a bit better than this one and is priced more than $100 higher. When you are spending $200 on a cigar cutter, you likely care about more than just performance. However, as we’ve seen before with high-priced, good-looking cutters—they still need to perform. Although it’s not the best cutter in terms of cutting caps—particularly for the price—it works well enough for me to recommend it. As an amazingly attractive accessory, the Elie Bleu beats out just about any other cutter I have used. People who are paying this much for cigar accessories are typically looking for more than just functionality, and taking everything into account, the Elie Bleu Double Blade Cigar Cutter holds its own.

In a confusing manner, we purchased a cutter to be reviewed, then, unsolicited, Elie Bleu sent us this colorway of the cutter which we opted to use as it photographs a lot better than black.