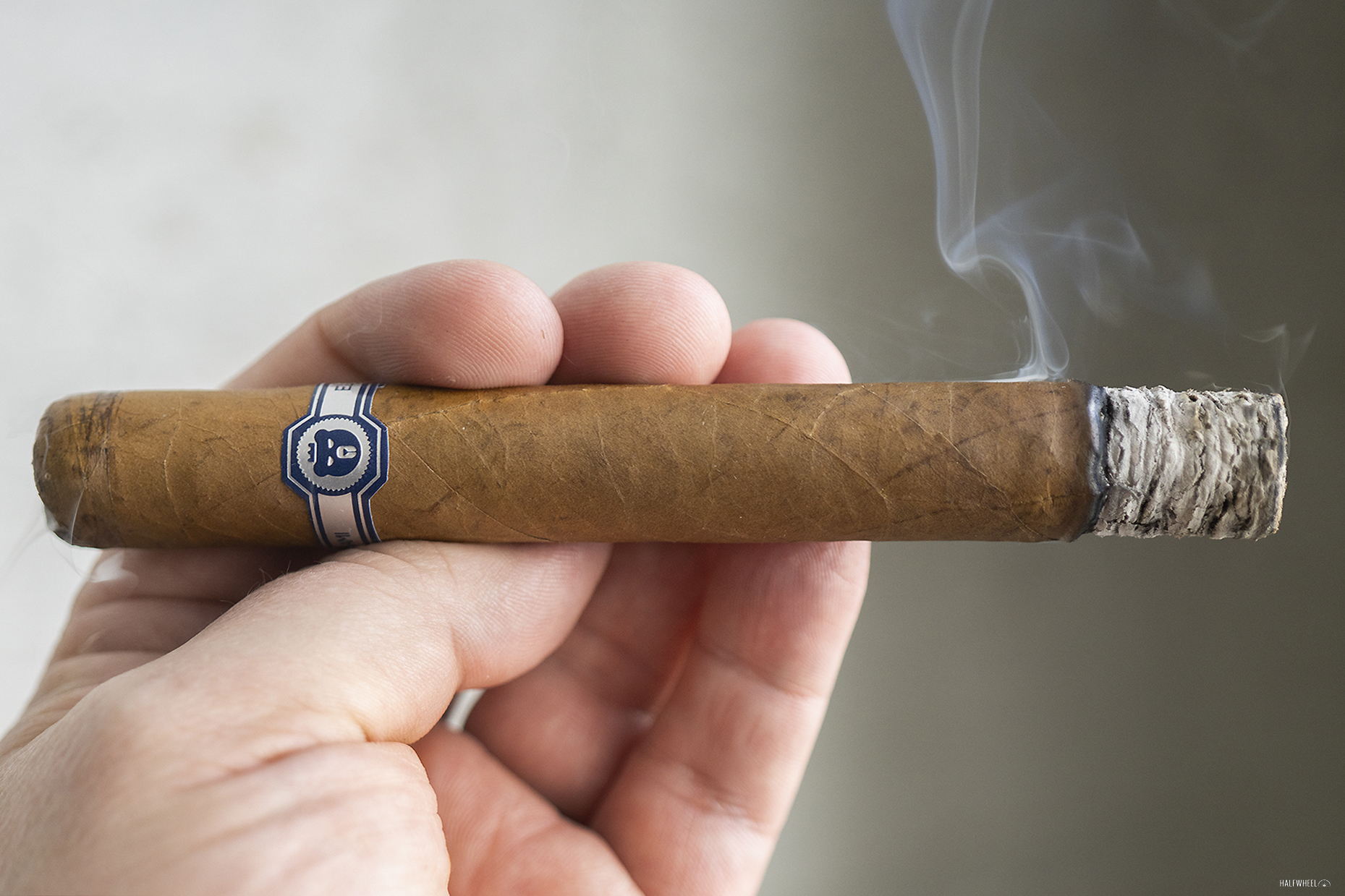 In 2014, Warped Cigars announced its first new cigar line in more than three years. Dubbed El Oso—which translates to The Bear from Spanish—the blend includes an Ecuadorian habano oscuro wrapper, an Ecuadorian binder and filler tobaccos from both the Dominican Republic and Nicaragua.

That same year—which was the year Warped made a big push to be a national brand—the company released its second blend that took its inspiration from custom rolled cigars that are prominent in the Cuban cigar world: La Colmena. Packaged in boxes or tins—depending on the vitola—the cigar incorporates an Ecuadorian DeFlorada wrapper covering dual Ecuadorian binders as well as both Dominican and Nicaraguan fillers.

Seven years later, the company decided to combine parts of both of those two cigars to create an entirely new cigar named El Oso Blanco, albeit with “some blend tweaks” according to Kyle Gellis, Warped’s founder. El Oso Blanco is made with the Ecuadorian DeFlorada wrapper from the La Colmena and the Ecuadorian binder plus the Dominican and Nicaraguan filler tobaccos found in the original El Oso blend.

“The Bear has eaten too much honey!” reads a post on Warped’s website. “Imagine if you could, a reverse Black Honey…” Black Honey is a reference to a special version of the La Colmena blend.

A total of 600 20-count boxes of the 6 x 48 El Oso Blanco were produced at the El Titan de Bronze factory located in Miami. Each cigar carries an MSRP of $18 and they began shipping to retailers on Nov. 9. The El Oso Blanco’s silky smooth milk chocolate brown wrapper features a small amount of oil. In addition, the cigar is nicely firm when squeezed, and while there are some noticeable veins running up down its length, they are far from distracting. Aroma from the wrapper is a combination of cinnamon, generic nuts, cedar, barnyard and hay while the foot includes notes of sweet cream, earth, peanut butter, aromatic cedar and cocoa nibs. Finally, after a v-cut the cold draw features flavors of creamy cedar, cinnamon, cashews, leather, asparagus, white pepper and a touch of varnish.

The first third starts out with a massive dark chocolate note mixed with some nice spice on my tongue before the main flavors transitions to creamy peanuts and earth. Additional notes of toasted bread, coffee beans, leather, cocoa nibs and hay flit in and out, and a significant amount of spice continues to be noticeable on my lips and tongue as the first third burns down. In addition, there is a small amount of both white pepper and honey sweetness on the retrohale. Construction-wise, the draw is excellent after a v-cut, and all three samples feature some of the best-looking burn lines I have seen in a cigar in quite a while. Flavor is medium while both body and strength are stuck halfway between mild and medium by the time the first third comes to an end.

Creamy peanuts remain the name of the game during the second third of the Blanco, followed by more earth, leather tack, hay, freshly roasted coffee beans and some slight cinnamon. In addition, there is still some nice spice on my tongue, while the retrohale still features a small amount of both white pepper and light honey sweetness that, unfortunately, hasn’t changed much from the first third. In terms of construction, both the draw and the smoke production continue on their excellent path, but the burn on two samples becomes problematic enough to need minor corrections. Flavor is slightly stronger than medium, body is just under medium and the strength bumps up slightly to come closer to medium by the end of the second third. There is not much change during the final third of the El Oso in terms of profile, with a distinct peanut note easily continuing to the top spot, and it’s not even close. Secondary notes of leather, gritty earth, potato chips, hay and dark chocolate show up at various points, and while there is a bit more of the white pepper and honey sweetness on the retrohale, neither are strong enough to make all that much of an impact. While the draw and smoke production continue to give me no issues, the burn on one sample has to be touched up again to avoid larger problems. Flavor ends just above medium, while body and strength hit a point just below medium as I put the nub down with less than an inch remaining. I have enjoyed a number of Warped releases in the past—including both blends this cigar is based on—so was interested to see what the El Oso Blanco would end up being. What I found was a creamy, nicely balanced cigar that highlighted by main flavors of peanuts and earth. Having said that, the profile is fairly linear, with very few changes between thirds. A little more of the honey sweetness on the retrohale would have helped push the profile to a different level. In the end, the El Oso Blanco is both enjoyable and easy on the palate—I imagine it might make a great morning smoke with some coffee—but don’t expect major surprises at any point while you are smoking it.