A month or so ago I was talking to someone and they were mentioning the effects of caffeine and cigars. They then suggested something along the lines of trying to add caffeine to a cigar, and I thought to myself: someone’s already tried that.

The timing couldn’t be better because today is April Fool’s Day and that means it’s time for a serious review of a not so serious product.

At the 2016 IPCPR Convention & Trade Show a company called Nicaragua Cigar Distributors debuted with the aforementioned concept: food grade energy components like caffeine and taurine were added to a cigar.

Called Double Shot, the company boasted that those components were FDA-approved—mind you, this was right after regulations by the U.S. Food & Drug Administration (FDA) were announced—and the company indicated that it was serious.

The cigars never came out, the last update on social media from Nicaragua Cigar Distributors was in late 2016 and the somehow associated Santiago de los Caballeros brand hasn’t been heard from since mid-2017. It was intended to be offered in four sizes, priced between $7.50 and $9, each packaged in tubos.

We have a habit of keeping at least one sample of every cigar we get at the IPCPR Convention & Trade Show and for better or worse, I dug up the Double Shot we had and took the plunge for today’s review. If you didn’t know any better, it’s challenging to designate this as just anything other than a typical cigar. Unfortunately, our sample hasn’t been stored in cellophane, so the aroma is pretty mild: a bit of leather and not much else. The aroma of the foot is also pretty mild, but it smells like a jar of gumballs, which isn’t that uncommon of a flavor for me to find in the pre-light aroma. That gumball flavor continues in the cold draw, now mixed with some twang along with woodiness, some saltine cracker and a bit of table salt. There’s certainly nothing that screams energy drink.

The Double Shot Energy Cigar starts with a mild-medium cigar, a familiar saltine cracker and a mild touch of underlying sweetness. While this is the part where I normally talk about flavor, I have to talk about the construction first. Every few puffs I find myself relighting the whole cigar. It never goes out, but it never stays entirely lit. As such, the flavor is very toasty. When I am able to take consecutive puffs without picking up my lighter, I get some earthiness joined by a super sweet mango and Japanese mayo. The retrohale has some lemon, but it’s completely overshadowed by some very sharp woods. 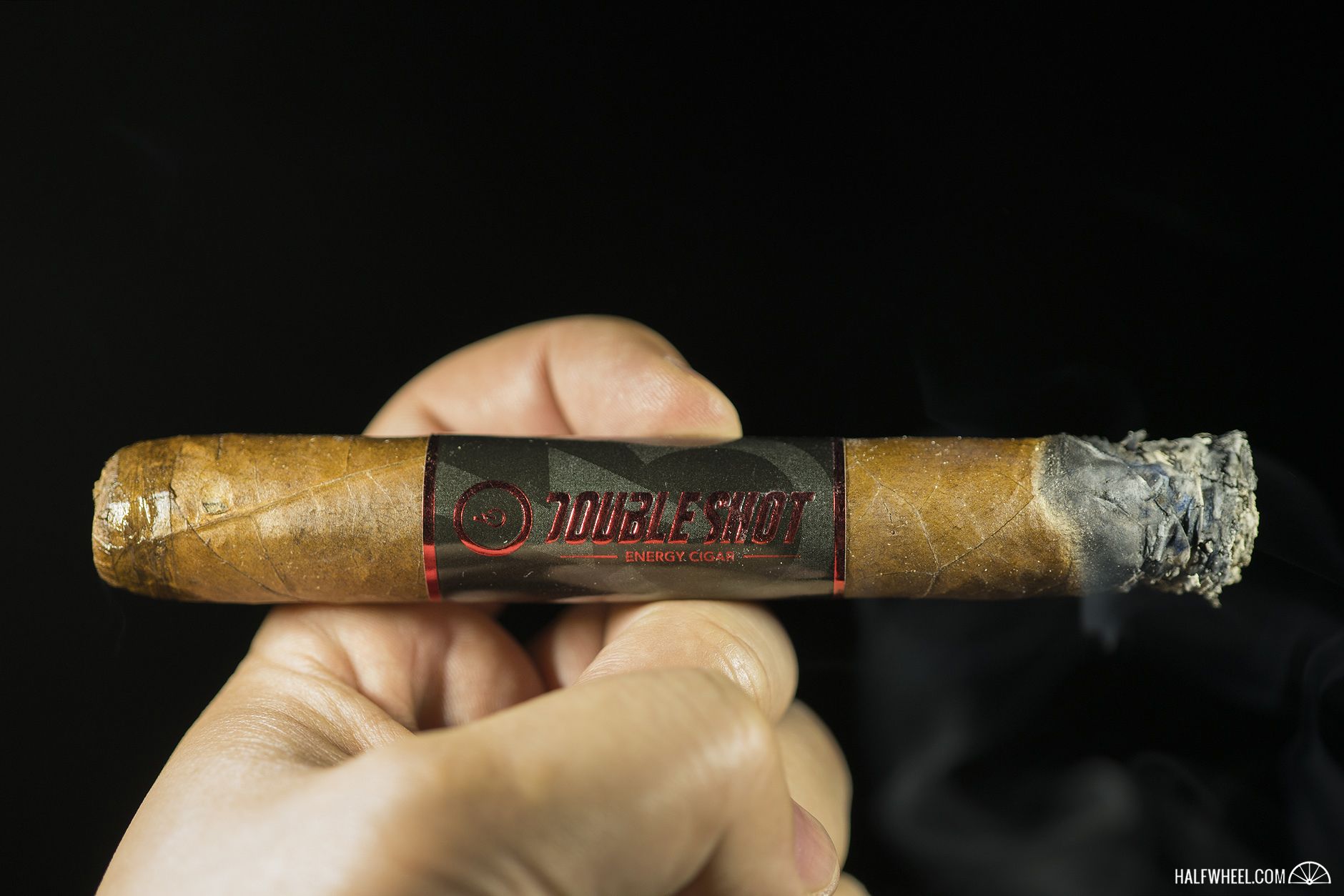 I come to the conclusion that the Double Shot is burning so poorly it cannot even tunnel. That doesn’t change in the second third and as such, the flavor is oftentimes pretty bad. When the cigar isn’t being preceded by a touch-up, I get the same lemon and earthy mixture, now joined by some hoisin sauce and a slight creaminess that reminds me of hollandaise sauce, right before it begins to thicken. The flavor is medium-plus, body is medium-full and strength is medium. The lemon-earth mixture remains, though that’s only when the cigar isn’t being touched up, which is happening more frequently. I pick up some thousand island-like flavor, more like In-N-Out’s special “animal” sauce, but the flavor really isn’t worth talking about. Burn issues continue to be on a level that is amongst the worst of any cigar I’ve smoked in my life and now the draw is getting worse as the tobacco doesn’t burn. I’d say the cigar is similar in intensity levels as the second third, though I’m definitely feeling the nicotine more, which is almost certainly a result of the touch-ups and increased puff rates, not the actual cigar. First thing's first: I didn't detect any caffeine or any other energy boosters. If you had told me this was a normal cigar, I certainly wouldn't have thought twice about it. But that's not the real problem; this cigar was bad. If these cigars had come to market anywhere close to the condition of the one that I smoked, there's no way they'd be around today. From a burn perspective, the Double Shot was essentially unsmokeable. The best pun I came up with: it's a novel idea that was a novelty cigar.