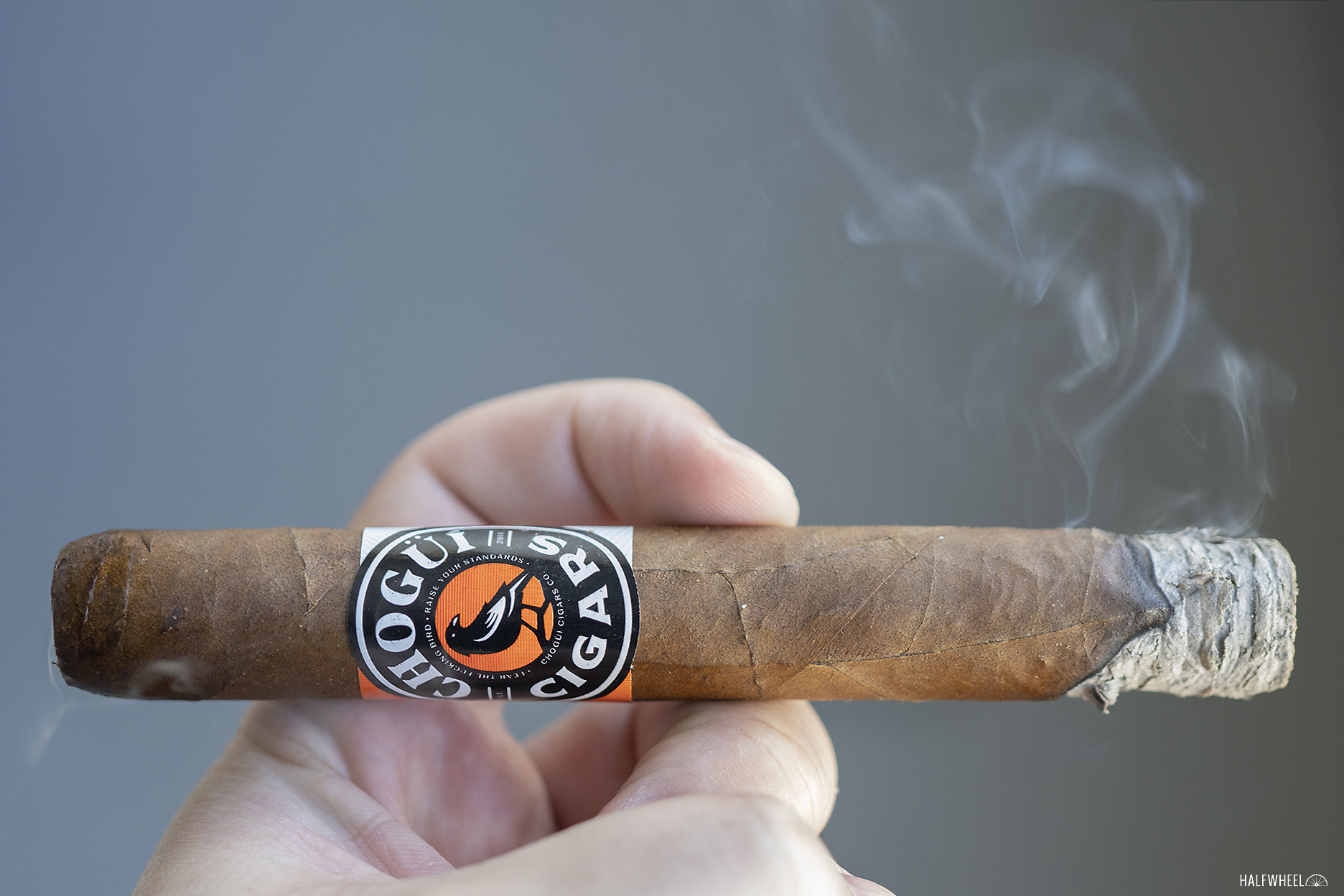 In a number of different ways, Skip Martin of RoMa Craft Tobac has introduced me to a number of cigar companies. In 2010—back when he was a professional consumer after his retail business had closed and before RoMa Craft launched—Martin literally introduced me to a dozen or so people in the cigar business at a party in New Orleans. Shortly after that while Martin was moonlighting as an occasional cigar blogger, he wrote about Eladio Diaz—the longtime Davidoff blender—and Diaz’s special birthday cigars, describing one of them as one of the greatest cigars he ever smoked. And once RoMa Craft Tobac was started, Martin took to social media to largely complain about Dominican cigars, but mentioned one new brand he thought was doing it right: Chogüí.

While Martin and I don’t always agree, he definitely got the Chogüí part correct. I was fortunate to be able to get some of the Chogüí Primera Edición, the company’s first cigar that launched in 2014, and reviewed it in 2015, scoring it a 93. There aren’t many 93-point ratings given out on this site and I’m not sure there’s ever been a brand that has had its debut release score as high.

Chogüí is the brand of Victor Nicolás, a Dominican cigar smoker who decided to make his own cigars. For this, he turned to Leo Reyes, one of the Dominican Republic’s most respected and prolific tobacco growers, and the relatively small factory of Francisco “Chico” Rivas, which was referred to as the “Top Secret Nest,” a play off Chogüí’s bird theme.

In 2018, Nicolás decided to focus on other things and quietly departed the cigar business. I remember contacting Mike Szczepankewicz, Chogüí’s then-U.S. distributor, about what was happening with the brand and even Szczepankewicz acknowledged he wasn’t really sure. That said, I still followed Nicolás on social media and would see pictures of him at the one of the Dominican’s beautiful beaches or pictures of a house under construction, and yes, pictures of cigars. There were times in which it seemed like Nicolás would hint at a return to cigars, but that really picked up late last year.

Eventually, Nicolás confirmed that he was once again going to return to the cigar business. In February, he announced that Chogüí would return with an updated version of the Dos77 line and with distribution handled by Venture 1492, a new distribution and branding company from Kyle Gellis of Warped. In April, the revamped Chogüí Dos77 entered the market with all new blend and updated packaging. Nicolás said he wasn’t able to find the Dominican wrapper he used for the original Dos77 line, so he opted to use a sun grown Dominican corojo wrapper instead. Underneath that are more Dominican tobaccos, including piloto mejorado tobacco from the media tiempo priming used in the filler. The Dos77 Corojo debuted in a single 5 1/2 x 50 size, which Chogüí refers to as “rogusto,” a combination of robusto and gusto.

“We started working mid 2021 on a relaunch of the brand, from updating our design identity, relaunching with a new line and working on bring back eventually our old offerings,” said Nicolás in a press release. “We take great pride in bringing out 100% Dominican cigars to market and are confident we are offering what is a unique taste and smoke profile for the aficionados.”

Nicolás has said that an additional size will be introduced soon. There’s a lot going on with this band, which carries on the design language of the old Chogüí. As for the cigar, it appears well rolled with a deep brown-colored wrapper that has some reds and an above average amount of oil. Some veins are particularly prominent, though most are well hidden, and one cigar has a loose seam. The aroma from the wrapper is medium-plus with leather leading maple syrup. The foot is a bit stronger with chocolate and oatmeal over some distinct red pepper scents. Cold draws are medium-plus, though all of the flavors are pretty subtle. There’s vanilla bean ice cream, a sharp white pepper and a sweetness that borders between raspberry and some floral sweetness. Of note, I find the cold draws to have a pretty wide range of tightness.

The first puff from the Chogüí Dos77 Corojo Rogusto has dry sawdust, a semi-sweet nuttiness and then lots of damp wood and terroir-like flavors that take over the profile. There’s an underlying sweetness, but the overall profile does not taste sweet. I’ve smoked most of the Chogüí releases to date and I don’t find this to taste like a profile I’d associate with the brand. It’s much spicier and a bit more aggressive than I’d expect. Lots of terroir flavors lead most puffs, accented by a vibrant black pepper. Underneath the terroir I can find some other types of earthy flavors: damp earthiness, generic woods, some mineral flavors. On the plus side, the flavors have a chewy texture to them that means the smoke coats my palate in a more fulfilling way than an average cigar. The finish has herbal flavors, fruity sweetness, earthiness, nuttiness and black pepper. Retrohales are a bit more akin to the Chogüí I remember: nuttiness, Worcestershire sauce and some bourbon flavors. The finish of the retrohales have leather, saltiness, earthiness, creaminess and black pepper. Flavor is full, body is medium-full and strength is medium-plus. All three cigars have draws that could be better—one is too lose, the other too are too tight—and it’s impacting my ability to keep this cigar burning properly. Touch-ups are needed on each cigar and after the first clump of ash falls, the flakiness of the ash is making a pretty sizable mess next to my ashtray.

While the first third was too aggressive to be considered “balanced,” the second third points the cigar in the right direction. The terroir flavor is till there and I don’t have to go looking for it to taste it, but nuttiness is now the strongest singular flavor. Underneath that there’s a decent dose of saltiness, creaminess, hints of ketchup and a vibrant black pepper that is more or less restricted to the center of the tongue. The main flavor is chewy, but the second third ramps that up even more. There’s nuttiness, peanut butter, white pepper and some earthiness. Retrohales are remarkably different with a potato starch flavor that I can’t quite fully identify leading some oak and lemon sweetness. The finish is more grain-like than potato starch—but it’s a similar flavor—accented by toastiness and fruity sweetness. That said, some retrohales deliver a remarkably different with white pepper all over the mouth leading earthiness, leather and some creaminess. Flavor is medium-full, body is medium-full and strength is medium-plus. My issues with construction remain the as they were in the first third: the draw could be better, the cigar struggles to keep consistent smoke production, and there’s a minor amount of tunneling. I’m pleased to find that the Chogüí Dos77 Corojo Rogusto continues to head in a path towards finding balance. That doesn’t mean the black pepper and terroir flavors are gone—both remain—but they are secondary notes in a profile that now has nuttiness accented by a very detailed paprika, creaminess and some Ritz cracker-like flavors. The finish is a bit of a reminder of the first third—damp earthiness, lots of black pepper—but the saltiness is more in check and there are lots of bread flavors that help to soften the more aggressive notes I’m tasting on my palate. Retrohales during the final third are the first times I can recall not tasting any pepper since the cigar was lit up, so much so that I’m a bit surprised it’s the same cigar as I’ve been tasting pepper in some form or fashion for more than two hours. The finish of the retrohales is very subtle and it’s tough to tell what’s a flavor that is being caused by the smoke exiting my nostrils and what’s a residual flavor. Creaminess, bread and nuttiness are the flavors that stand out the most, though the more notable part remains the lack of black pepper. Flavor and body both turn back up to full, strength finishes at medium-plus to medium-full depending on the cigar. Construction gets a bit better, but only slightly. My issues with the draw and the burn consistency remain, which isn’t the least bit surprising given these particular issues and how they presented themselves during the first parts of the cigar. While it shouldn’t make a difference about the score, I wonder what my take on this cigar would be if the flavor profile was in the reverse order. The Chogüí Dos77 Corojo Rogusto starts out very aggressive with an terroir and peppery profile that I find to be both too earthy and too spicy for its own good. But by the final third, the earthiness and pepper—both of which were still easy to identify—were far more integrated into a balanced profile. If nothing else, a reversed order would mean that my palate wouldn’t have gotten blitzed in the same manner that it did, but also I could have decided just how much of the heavy doses of terroir and black pepper I want to taste. But even if there was a magical “reverse order” button in the humidor—no, I don’t think smoking the cigar backwards achieves this role reversal—there is an obvious issue with this cigar: it needs to be bunched better. Until that gets fixed, it’s going to be tough to recommend the new Chogüí Dos77 Corojo.