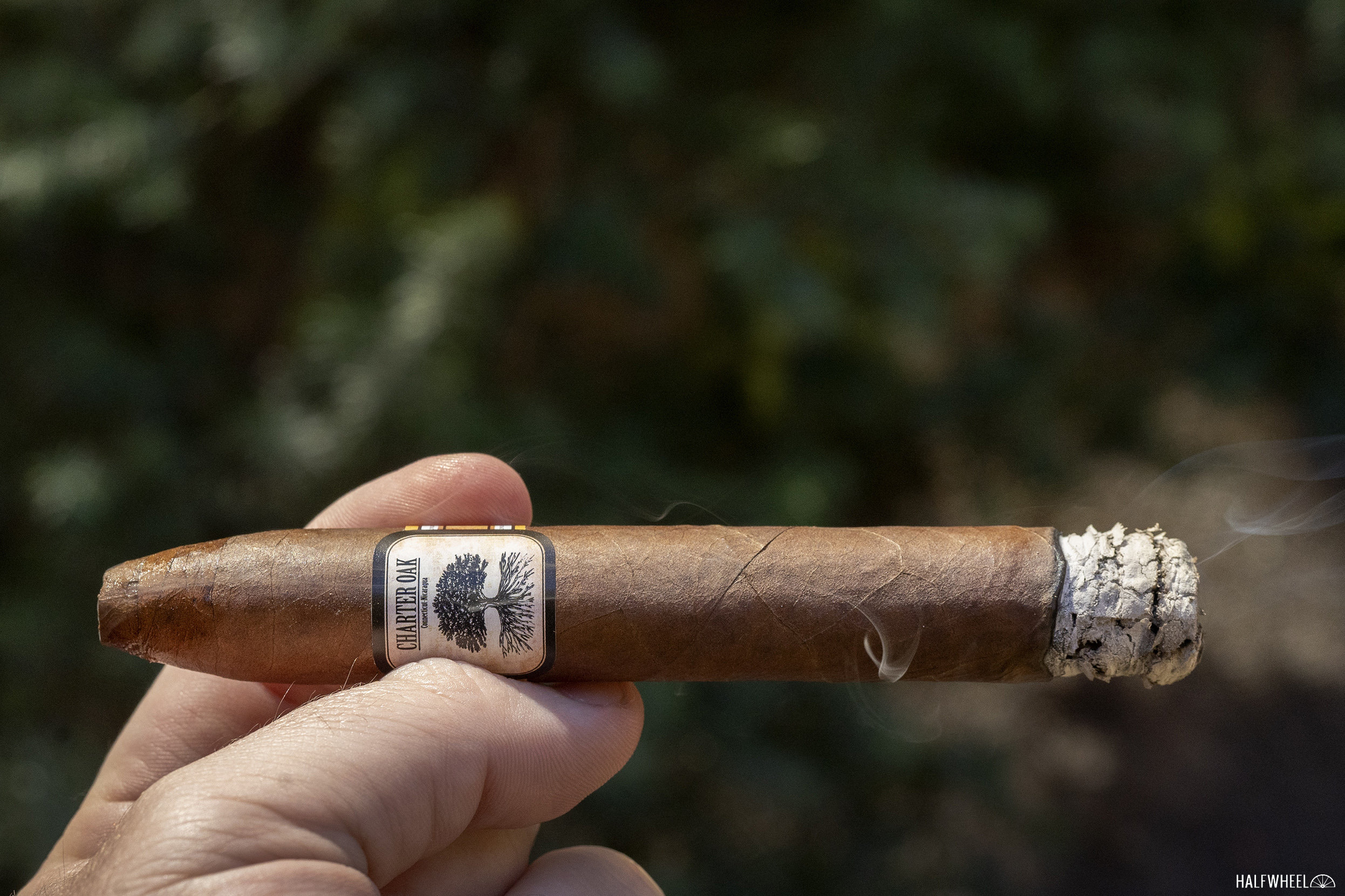 Cigar companies adding new wrapper options to existing blends is nothing new and has been written about more times than I would like to admit. There’s nothing wrong with the practice by any means; sometimes a new leaf adds a really enjoyable spin to an existing blend.

But while that process usually involves the words natural and maduro, Foundation Cigar Co.’s third addition to its Charter Oak line went a different way, using an Ecuadorian habano leaf.

“I am happy to have been able to blend a beautiful Habano wrapper into an expansion of the Charter Oak line, filling the profile gap between the CT Shade and the CT Broadleaf,” said Nicholas Melillo, founder of Foundation Cigar Co., in a press release when the cigar was announced. “This is a medium-bodied, spicy blend with amazing flavor at a great value.”

Underneath that Ecuadorian habano leaf is a binder and filler from Nicaragua. 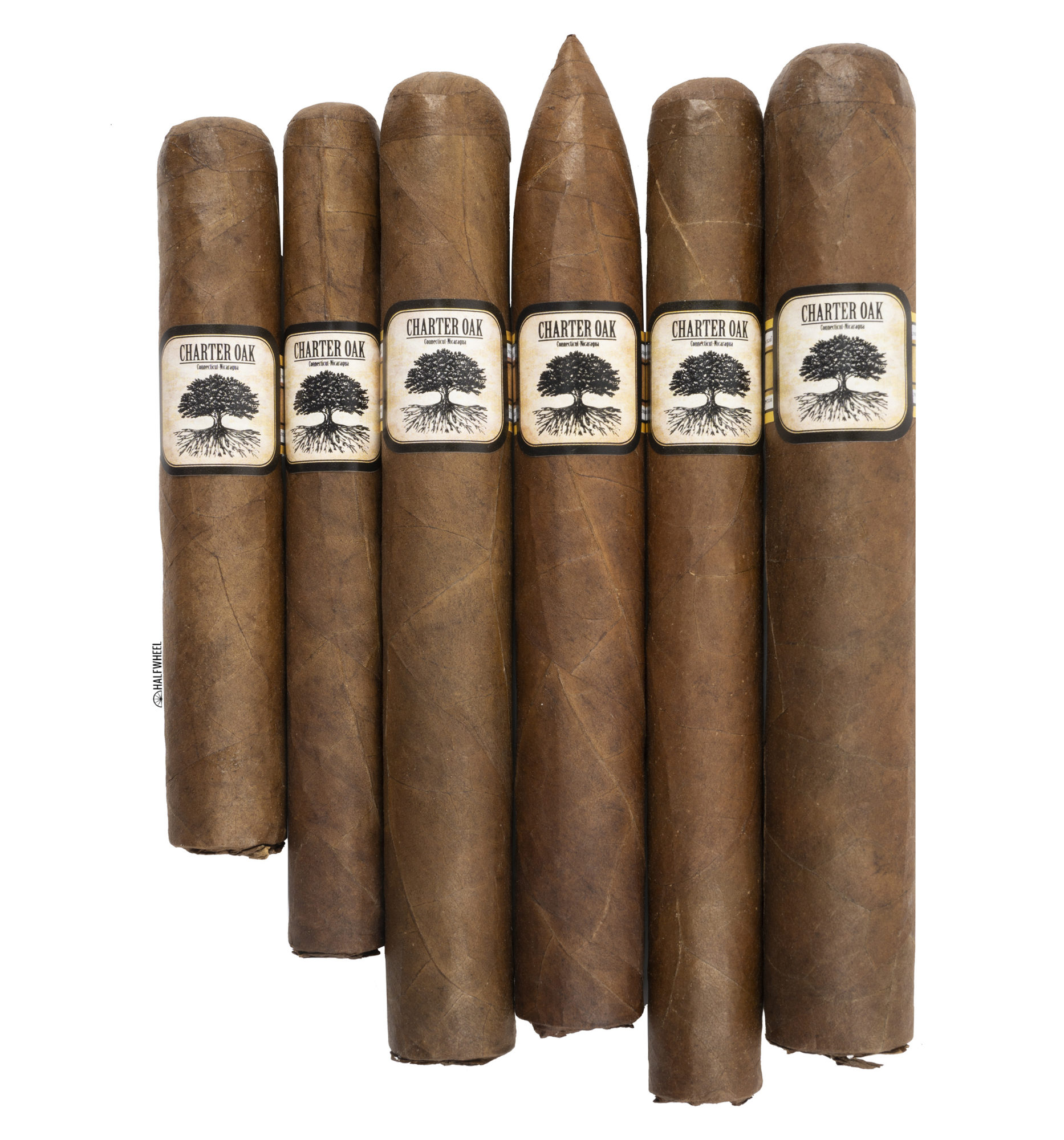 It is offered in six sizes:

As for the name, Charter Oak refers to an oak tree that is believed to have stood in Hartford, Conn. from the 12th century until the 1850s. Foundation is located in Windsor, Conn. 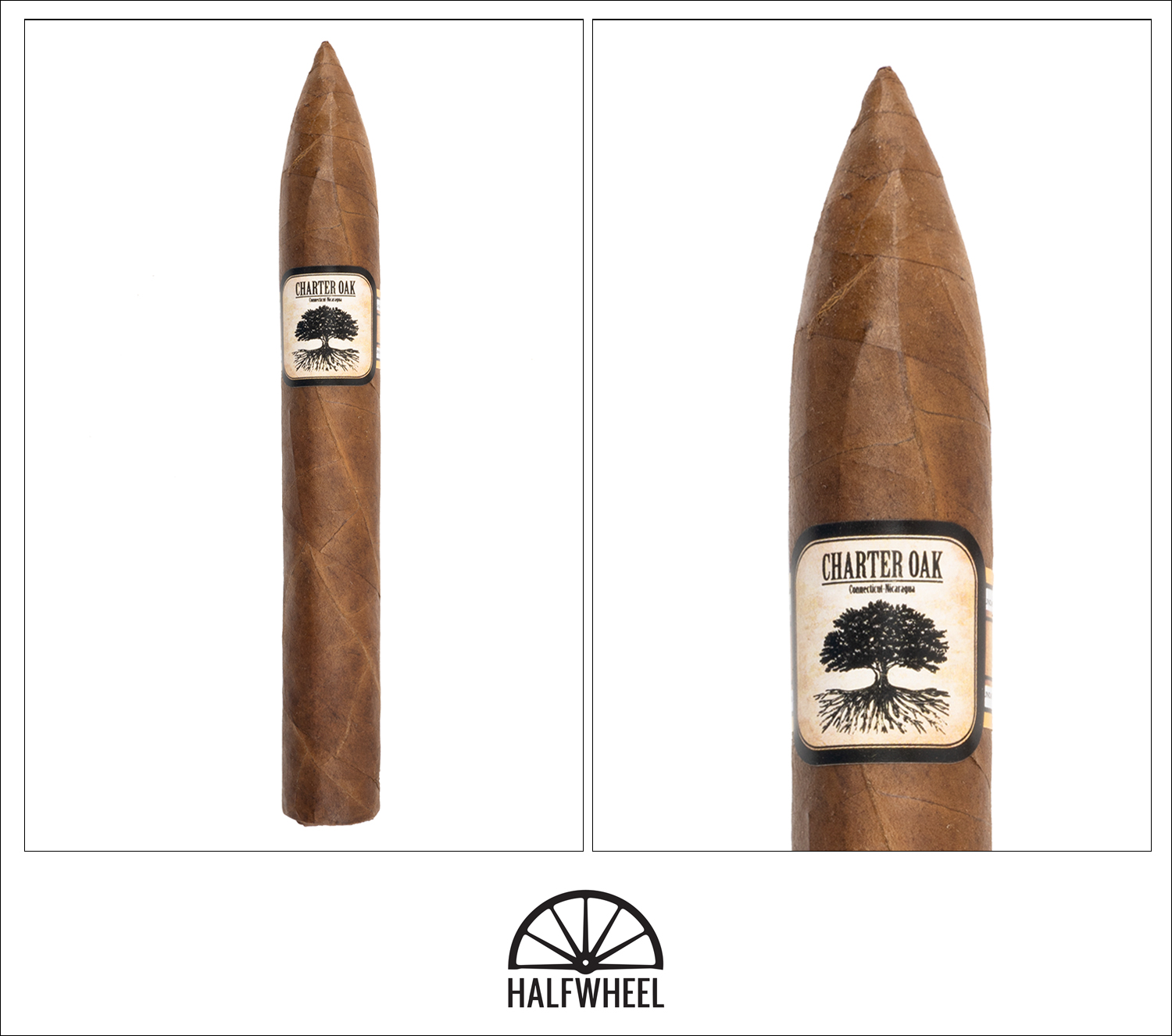 While it is easy to see some differences in wrapper’s color near the seams, the Charter Oak Habano Torpedo has a remarkably even-hued leaf for this varietal, which I tend to think of having more mottling and variation. The wrapper has a network of average-sized veins, not much tooth, and a matte appearance but the feeling of some oils on the fingers. The construction is very good, rolled firmly with a seemingly perfect head and consistently well-covered feet. Those covered feet offer light peanuts, sweet white bread and just a bit of dandelion, though whatever is leading me to think in that direction is rather mild. Even with a conservative clipping of the head—and acknowledging the covered feet—air moves well on the cold draw and now delivers a peanut butter cookie flavor, with individual cigars spinning that note off into peanut butter ice cream and something closer to those peanut butter filled crackers I associate with convenience stores and road trips. There’s just a touch of pepper if I’m willing to look for it on the front of the tongue, though it’s sensed more by physical reaction than true flavor.

The Charter Oak Habano Torpedo opens up with more black pepper than I would have imagined, backed by woodiness and some more of those peanut and peanut butter flavor. The combination is lighter in flavor and body than I might have otherwise expected, but the sensation on the taste buds punches above its weight. The pepper is equally as bright, if not a tick more, via retrohale, but it is also remarkably clean out of the gate. As the burn line progresses through the first third, the body of the smoke thickens up a bit but the flavor is remarkably smooth and balanced, never trying to do too much as it moves with easy finesse. The first third sits at medium to medium-plus in flavor and body, while strength is just shy of medium. Construction is near flawless, with the only issue being figuring out the ideal amount of the head to cut for draw purposes. 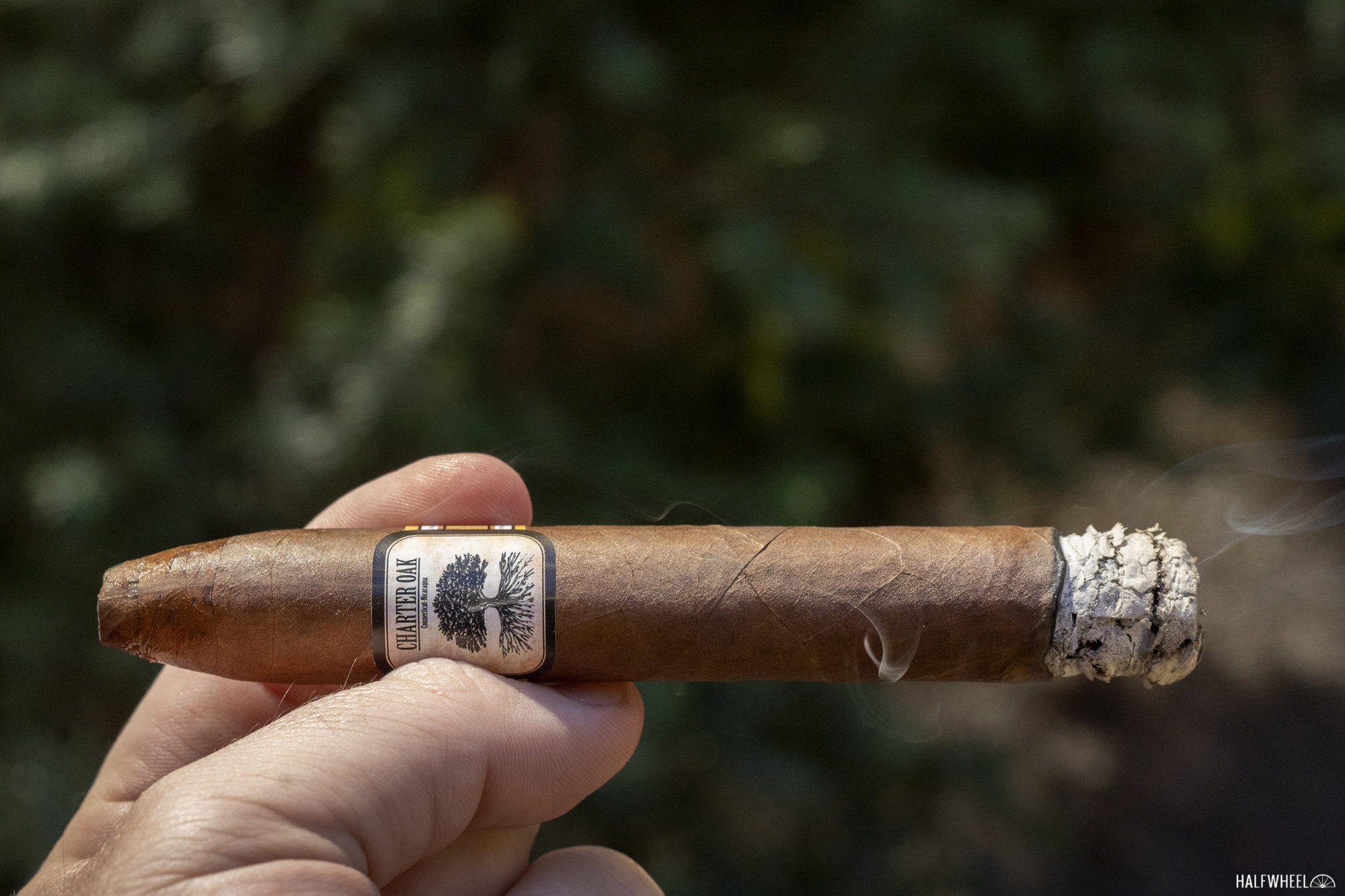 There is a bit of milky creaminess emerging at the start of the second third, a flavor that is not as thick or sweet as other forms of creaminess, but it certainly works in this blend on the palate. It’s a bit better through the nose, though if you’re pepper averse, it might not be worth the trade. Peanut butter returns and begins to drive the profile, making for a very enjoyable sensation on the taste buds, while white pepper becomes very bright and crisp on retrohales and makes for an interesting contrast. Across the midway point, the peanut butter fades into peanuts and then a very light, dry wood flavor that is accented by some of the white pepper. It’s a mellower and thinner profile, but one that also begins to show more of the habano leaf, or at least what I tend to think of being offered by that varietal, as well as a cigar with habano in the name. The final puffs of the second third are nothing short of incredible, adding a bit of floral sweetness to the aroma and making that the showpiece of the experience. Flavor and body still sit in medium territory with a little variance, while strength has moved up to join them. Construction remains about as perfect as I could want. It’s always interesting—both in the good and bad sense—to find variance in cigar samples, and the first I find is in that floral sweetness, as it is very mellow in the second sample and quickly gets bumped out by a bit of chalk and sourness. Thankfully neither stick around too long, and the flavor returns to a bit more substantial yet still dry woodiness and pepper, a combination that is focused on the front half of the tongue. Creaminess begins to return to give the rest of the taste buds a decent coating and help swing the cigar back into a bit better balance. As the Charter Oak Habano Torpedo starts eyeing its upcoming finish, the profile has a tendency of getting a bit rougher by way up some light earthiness. Occasionally the chalkiness returns, thankfully without any sourness, but it does throw the balance off just a bit. Flavor finishes at medium-plus, again with some variance from puff to puff, while body is medium to medium-plus and strength is a subdued medium. I can’t say enough about the construction of these samples, as there simply isn’t a problem to be found. Before smoking the Charter Oak Habano Torpedo, I could tell you two things: I hadn't been a big fan of either the Charter Oak line or the torpedo vitola. After smoking the Charter Oak Habano Torpedo, I can tell you one thing: I stand corrected on both of those things. After smoking the first of the three samples, I was stunned by both the flavor of the cigar as well as its construction. The latter is easy to sum up: it's flaw-free and about as perfect as I have experienced from any vitola, let alone a torpedo. As for the flavor, it is incredibly well balanced, complex for the majority of its smoking time, and other than a few puffs in the final third never causes issue on the palate or in the nose via retrohales. This isn't as bold of a cigar as many other habano cigars on the market, but that is far from a complaint; rather, it is a compliment to the sum of all the components. This is not only a cigar I recommend trying, it is one I would suggest picking up in multiples to experience everything that it has to offer.