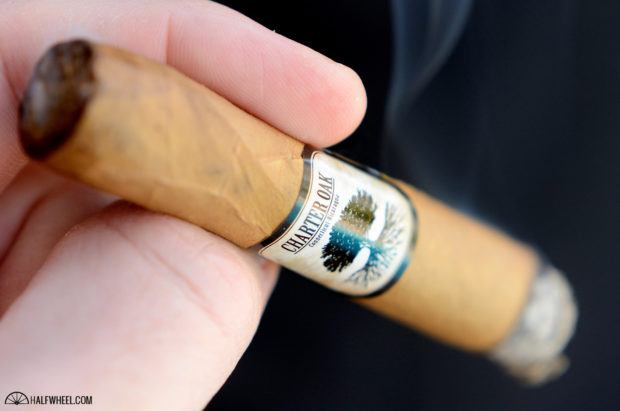 In an homage to his home state, Foundation Cigar Co. owner Nicholas Melillo based the line off The Charter Oak – a large tree that stood in Hartford, Conn. which was believed to have stood from the 12th century until the 1850s, at which point it was destroyed by a storm. A symbol of independence and an icon in Connecticut, it’s an appropriate name to give a cigar paying tribute to the state.

In addition to the state, Melillo had this to say about the release:

Charter Oak also pays tribute to my grandfather, who while earning a modest salary working for the Winchester Repeating Arms factory after WWII, smoked exclusively broadleaf cigars manufactured by FD Graves on State St., while, no joke, Rick Ardito’s grandfather, a guard at Winchester, also smoked FD Graves’ biggest selling broadleaf, Muniemakers. I wanted to create an economy-minded, everyday smoke for connoisseurs; something tasty and delicious but didn’t break the bank.

The release comes in two different blends—one featuring an Ecuadorian Connecticut wrapper and the other a Connecticut Broadleaf wrapper—with each blend coming in the same five sizes at the same prices: 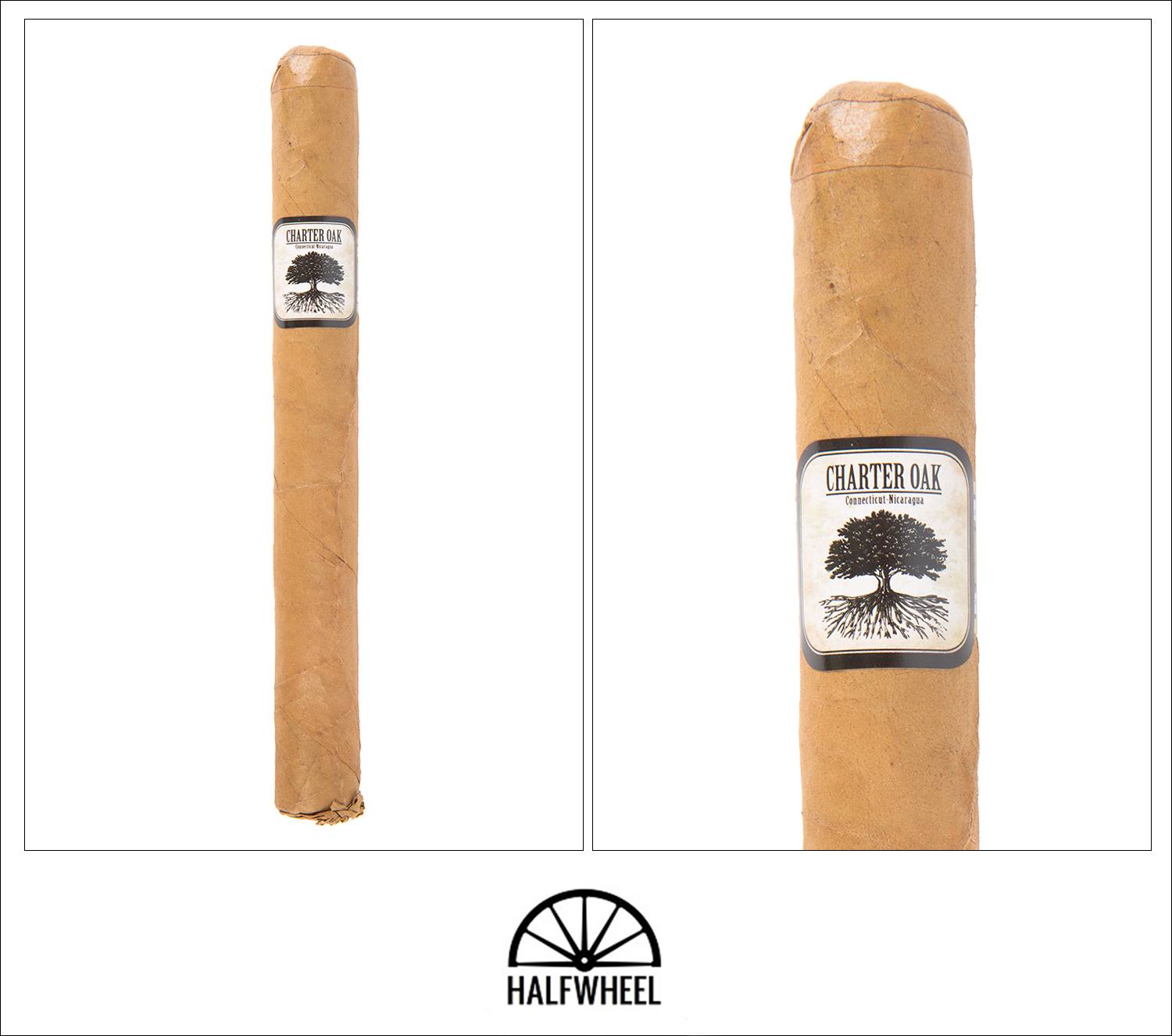 Nothing about this cigar looks or feels like a budget cigar. The light tan wrapper is extremely soft, slightly oily and overall quite luxurious feeling. There is one significant vein running about three quarters of the length of the cigar, but otherwise is bump free. Giving the cigar a squeeze, there is a decent amount of give to it, just stopping short of what I would call squishy, though there are a couple of softer spots than the rest. Coming off the wrapper is a ton of fresh alfalfa with a touch of vanilla and grains, while the cold draw has a huge dried fruit note that’s followed closely by more fresh hay and a touch of spice.

Starting into the first third of the Charter Oak there is a significant amount of sweet cocoa and roasted peppers up front, complimented by spices and creamy cedar. As the burn gets going it’s not completely even, but it probably has more to do with lighting the covered foot than anything else. The draw is right in the middle of ideal, which is nice to see since I would have guessed it would have been a little on the loose side with the amount of give there is. That being said, the cigar is not overly complex, the sweet cocoa, roasted peppers, spice and creamy cedar continue to work well together. The second third still sees the roasted peppers up front, while the sweet cocoa fades slightly joining the spice, creamy cedar and a hint of black pepper in the background. The burn line has finally become uneven enough that I touch it up a bit to keep things going at a steady pace, though it’s continues to be quite a wavy burn line. While the ash is dense enough to hold on to around an inch mark, there does seem to be a lot of extra ash that falls off somewhere between my hand and the ash tray. Right around the halfway point the sweet cocoa has faded significantly and the creamy cedar has left behind the creamy part. This leaves the profile much less sweet and smooth, getting a bit harsh with the peppers leading the march. 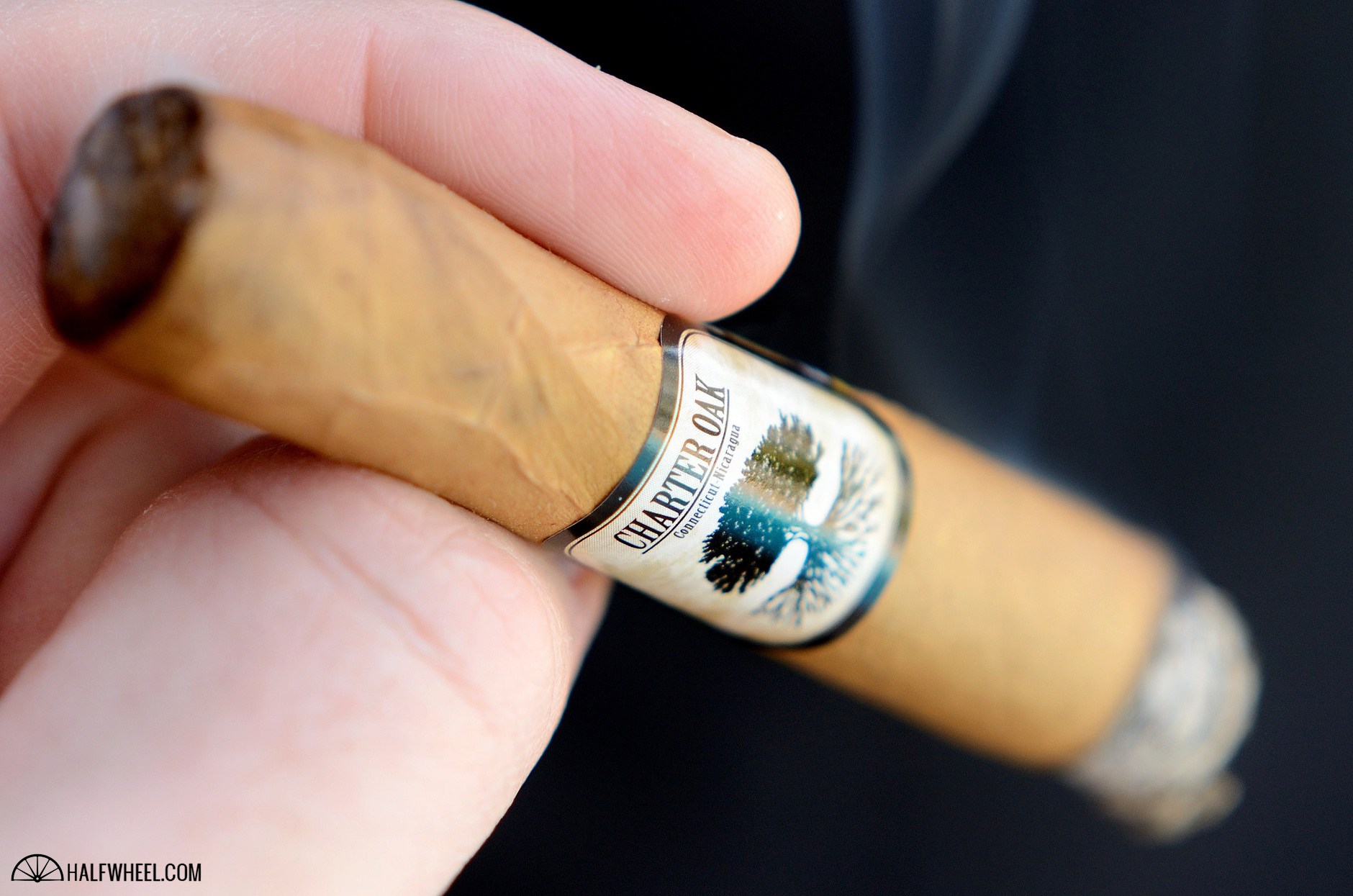 As I move into the final third the harshness persists, but not an overwhelming amount. Spice has moved to the forefront, quickly followed by the roasted peppers. The cocoa and cedar have both faded into small hints in the background, though strangely enough a bit of creaminess has returned. Another touch-up is required and the burn line quickly returns to the waviness from before. I’m still missing that sweetness from earlier, which means the bitter notes don’t have a counterbalance as they strengthen towards the end of the Charter Oak Connecticut, drowning out the last hints of cocoa and cedar. At this point the cigar has become a little harsh, and with just around an inch left it seems like a good place to set it down. The Charter Oak is an interesting line with a great theme and background, and an interesting move considering the rest of Foundation Cigar Co.’s lines are significantly more expensive. I think the Charter Oak Shade achieved what Melillo set out to do though, which was produce a good cigar at a great price. It’s certainly not an overly complex cigar, and the burn wasn’t perfect, but the flavors that were there were good for the majority of the cigar and the construction was quite acceptable. Keeping in mind that we don’t factor price into the score, it would be a good cigar regardless. For the consumer however, the price is great news and makes for an easy choice to try for yourself.