When Casa 1910 entered the cigar market in late 2021, it did so with a single cigar and a self-defined mission of changing the way people think of Mexican cigars, specifically, trying to get consumers to think of Mexico as a place that could make more luxury cigars.

For its sophomore year, the company is doubling its Mexico-made offerings from one to two but is also venturing to Nicaragua for its newest line, the Cavalry Edition. There are three different cigars, though somewhat confusingly, two different blends as part of the Calvary Edition. One cigar—the 6 x 60 Jilguero—uses a Mexican San Andrés wrapper over a blend of Nicaraguan tobaccos, where as the other two cigars use tobaccos from three countries. That includes a habano wrapper from Ecuador, a Mexican San Andrés binder and fillers from Estelí, Jalapa and Ometepe, Nicaragua. Both sizes for that blend measure 6 x 54, though one is a torpedo and the other is a toro extra.

Fortunately, all three cigars are pretty easy to tell apart as the secondary bands on each cigar have the name of which one it is. The names of each of these cigars are references to famous horses, hence the Calvary Edition, and in this case As de Oro was owned by Emiliano Zapata, a leader in the Mexican Revolution.

While the company discloses which country each cigar comes from, it does not disclose which factory is making these cigars. Two of the Casa 1910 As de Oros begin with a false start of sorts. I see visible signs of cracking through the cellophane, more on that below. The wrapper is a very uniform color that looks a tad bit lighter than Hershey’s milk chocolate. There are very few veins and what little are present aren’t all that visible. There’s a very peculiar sweetness that I smell from an aroma that reminds me a bit of plum but also has a characteristic that reminds me a bit of new carpeting. I can’t really place it at all and each sniff seems to produce a different result. Whatever the case, it’s a medium-plus aroma and that’s basically the only sensation I can smell. From the foot, I smell honey, some softer woods, a hard pretzel-like aroma and some subtle coffee bean scents; it’s medium-full and very intertwined. Upon cutting, one of the non-cracked cigars immediately cracks, which is not something I typically find with the Fox 749 Cutter I’ve been using for nearly two years. Despite my concerns about how tightly packed the cigars are, the cold draw is fine on two of the cigars. The cold draws are tight but not as bad as I expected. Flavor-wise, I taste sweet cedar and nuttiness over some orange flavors, white pepper and raisin.

Once lit, the As de Oro starts with an obvious concern: the draw is predictably tight and much tighter than the cold draw. Flavor-wise, I find an enjoyable mixture of damp nuttiness and cedar over lemon, white pepper and earthiness. While I’m able to get some smoke on every puff, it’s not a consistent amount. Even at its best, it is not the amount of smoke I’d like to get from a cigar. Flavor-wise, there’s a smooth mixture of nuttiness and earthiness over leather, white rice, popcorn and a subtle harshness on the middle of the tongue. The finish has lots of woodiness—which is generally more cedar-dominant than other varietals—over creaminess, leather and plain crackers. Retrohales have peanuts, some unsweet floral flavors, a meatiness that reminds me of hot dogs and some white pepper. The finish is spicier than the retrohale thanks to white and red pepper, which sit over some pita bread and woodiness. Flavor is medium-full, body is full and strength is medium. While the flavor is generally good, the construction is problematic. The draw is very tight, which makes retrohales a bit tougher to enjoy thanks to a lack of smoke. The smoking rate is incredibly slow, taking more than an hour and 15 minutes to finish the first third.

One other area where the draw is impacting my smoking experience is that I find it difficult to really pick up the separation in flavors. Everything is extremely intertwined and as the cigar progresses, seemingly get only more intertwined. This makes it difficult for me to really pick up much in the way of transitions, though that could be the result of the tobaccos themselves. Nuttiness and earthiness still lead the profile though creaminess, mustard powder and dark chocolate join the fray, mixing with the cedar, leather and white pepper from before. Sometimes, I can’t tell any difference between the flavor when the smoke is in my mouth and the finish 20 seconds later, other times I find weird sensations like a rubber-like flavor, some dry herbal flavors and a mild bit of saltiness. The most common theme is that the finish is creamier than before. Retrohales are decidedly different thanks to lots of red and black pepper, joining earthiness, citrus, creaminess and a damp earth. The finish is either a mixture of creaminess and nuttiness or blasts of pepper including black pepper in the nose and red pepper on the tongue. Flavor is full, body is medium-full and strength is medium. The draw is slightly improving, but it’s still not good. Smoke production has not improved and touch-ups are needed on each cigar. 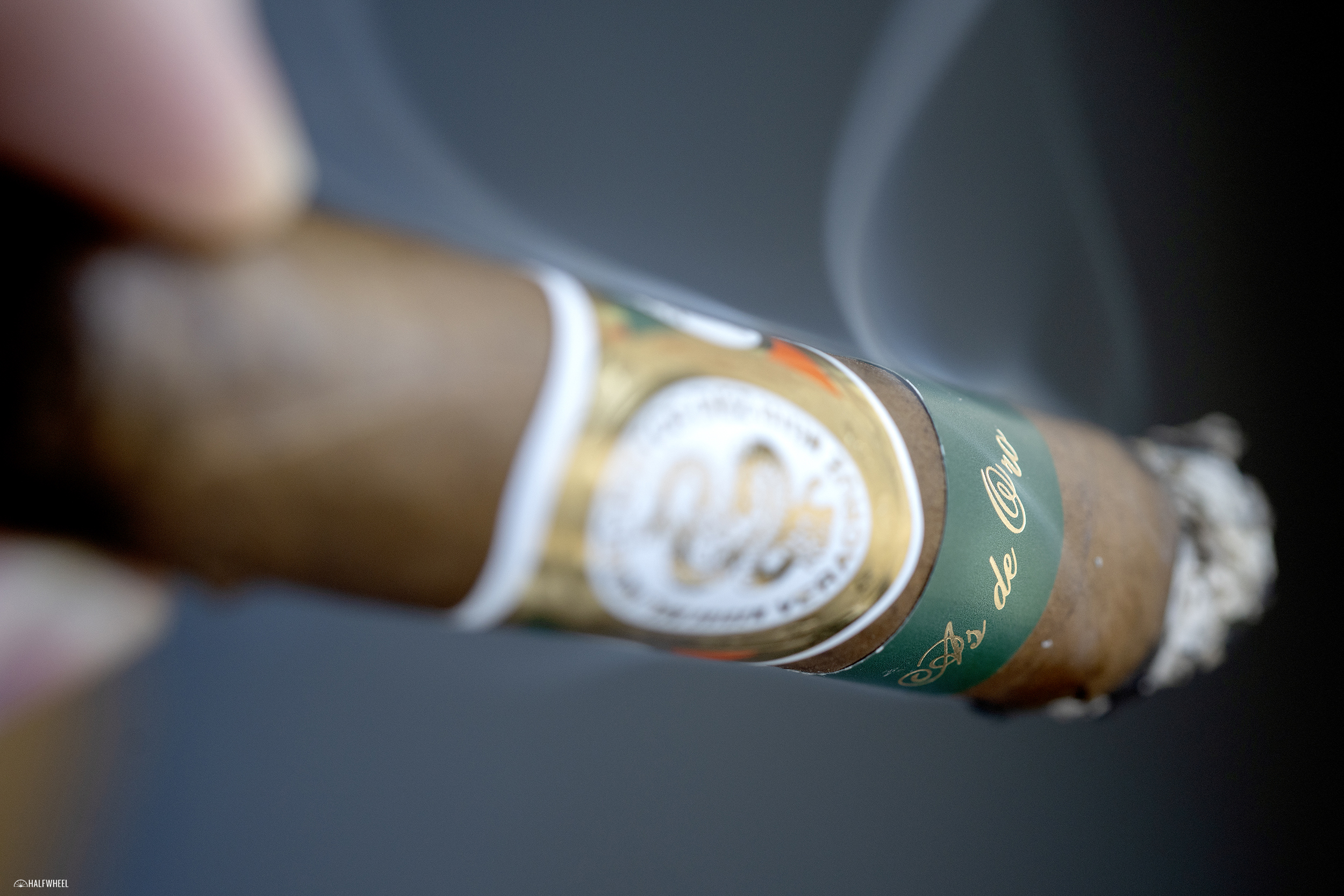 After nearly three hours, I’ve made it into the final third. Thanks to some cracking of the wrapper, the physical cylinder loosens up as the cigar burns and eventually improves the draw. I’m able to get more smoke production, though the Casa 1910 As de Oro is still delivering smoke volume that is well below what I would consider an acceptable amount. Nuttiness and earthiness still lead, but there’s an added harshness that is different from the pepper flavors from before. The finish has nuttiness, peppermint, black pepper and some more of that generic harshness. Retrohales have nuttiness, a flavor that reminds me of the smell of a pile of fall leaves, a roux-like creaminess, wheat and a generic harshness, the latter of which really coats my tongue. The finish has dry floral flavors and earthiness before dry herbs and white pepper join the combination. Flavor is medium-full, body is medium-full and strength is medium-plus. As I’ve written way too many times this year, construction issues make reviews like this difficult because I’m not sure what I was supposed to taste. Flavor-wise, I think Casa 1910 might very well be onto something. What I tasted was generally enjoyable and there were a decent number of different flavors throughout. At times, the flavors were extremely intertwined and trying to find differences during the first half of the cigar was challenging, but that’s really beside the point. Whether it’s an issue with how the tobaccos were placed in the bunch, the use of too many tobaccos or something else—the Casa 1910 Cavalry Edition As de Oros that I smoked were glaringly not up to the standard of a modern cigar. The tight draw destroyed whatever chance this cigar had for both enjoyment and the score of this cigar. Hopefully, Casa 1910 will identify what the issues are and get them fixed sooner rather than later.