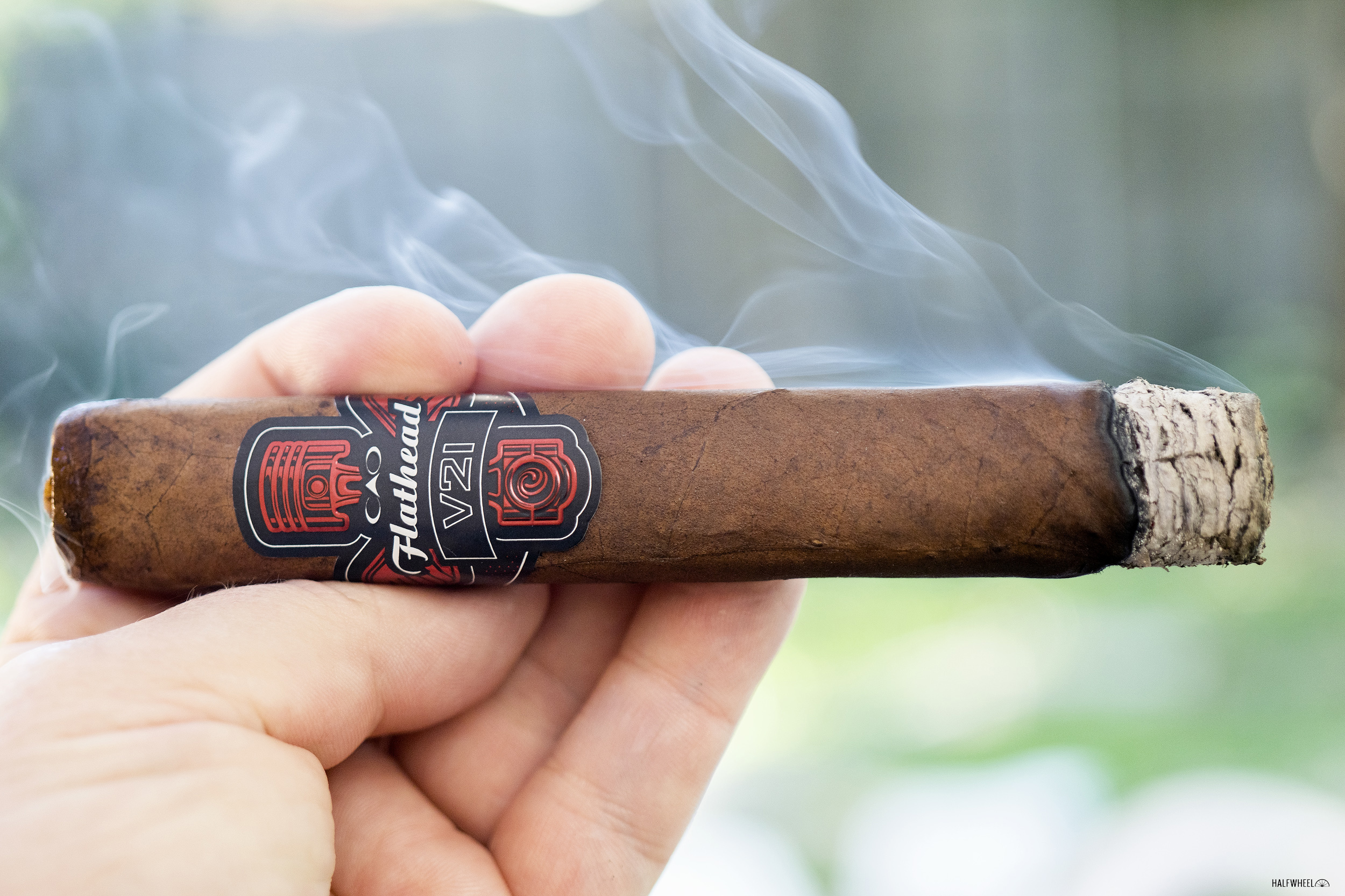 During the 2013 IPCPR Convention & Trade Show, General Cigar Co. showed off a new line that was inspired by the expansive world of car hobbyists and enthusiasts. Dubbed Flathead—due not only to the flat cap sported by the cigar, but also as a tribute to the engine style found on vehicles made famous by Ford and Harley-Davidson—that original blend was made up of a Connecticut broadleaf wrapper covering an Ecuadoran Connecticut binder as well as Nicaraguan filler tobaccos in the filler.

A number of new sizes and line extensions followed between 2013 and 2019—including the Flathead Sparkplug in 2014, the Flathead Steel Horse in 2015 and the Flathead V19 in 2019. In August of this year, the company announced the newest edition to the series made up of larger ring gauge vitolas that are made with a soft box-press. Named V21, the two-vitola line incorporates a blend that includes a Mexican San Andrés wrapper covering a Connecticut broadleaf binder as well as Dominican ligero and Nicaraguan fillers.

In addition, General says that the tobacco leaves used in the filler are given a shorter fermentation to “lock in the tobacco’s native characteristics” before undergoing an additional aging process.

“For Flathead V21, we wanted to give our fans a cigar that’s bold and complex, and still perfect for any smoking occasion,” said Rick Rodriguez, CAO’s master blender, in a press release. “We see this as the ultimate cigar for the CAO smoker who wants to experience the complexity of each tobacco with every draw. I’ve personally enjoyed V21 on its own and with a drink and have experienced different notes every time I smoke it. To me, that means we’ve done our job.”

Each of the two vitolas is limited to 54,000 cigars, packaged in boxes of 27 that began shipping to retailers in August. From a visual perspective, the CAO Flathead V21 Carb is quite attractive, with a dark espresso brown wrapper that is relatively smooth to the touch and only a few obvious veins. In addition, there is a noticeable amount of oil present as well as a slight box-press, and the flat cap is a nice, distinctive touch. The aroma from the wrapper is a combination of manure, hay, earth, cracked black pepper and leather while the foot features notes of generic nuts, oak, toasted bread and bitter espresso. Finally, the cold draw brings flavors of almonds, earth, leather, black pepper, oak, popcorn and slight vanilla sweetness.

The Flathead V21 Carb starts out surprisingly mild, with a bit of spice on my tongue and a slight earthy flavor on the palate that quickly morphs into notes of oak and creamy almonds, both of which easily take over the top spots in the profile. Secondary flavors of hay, dark chocolate, leather, popcorn and a touch of floral flit in and out, while the retrohale is full of black pepper and vanilla sweetness. Construction-wise, the cigar features plenty of smoke and an excellent draw after a straight cut—see below for details on cutting the flat cap—but the burn needs some help almost right out of the gate. Flavor is medium, body is just below medium and the strength is between mild and medium, but rising.

There is not much change in the main part of the profile of the CAO during the second third, with the same oak and creamy almonds combination leading the way followed by flavors of hay, dark cocoa nibs, popcorn, floral and some slight leather. In addition, there is still plenty of black pepper and vanilla sweetness on the retrohale, although the former is receding a bit compared to what was present in the first third. Thankfully, the burn has evened up nicely and the draw continues along its excellent path, while the smoke production has increased noticeably. Flavor increases slightly but I would still classify it as medium, body is now a solid medium and the strength hits a point just below medium as the second third comes to an end. While the familiar flavors of almonds and oak continue to top the profile of the V21 Carb during the final third, all of the flavors—including the more minor notes of leather, hay, wheat, floral and espresso beans—have become noticeably less distinct on the palate, and the finish becomes quite harsh about halfway thorough the third. In terms of construction, there are still zero issues with the draw or the smoke production, but the burn has become erratic enough that it needs attention with my lighter in order to stop it from getting out of control. Finally, both flavor and body end up at a point just above medium, while the strength increases enough to hit a solid medium. Over the years, I have smoked at least one vitola from each Flathead line, and to me, the CAO Flathead V21 Carb features the smoothest profile of them all. That is not to say there were not some issues—I had to touch-up two of the samples twice each at different points, and the flavors in the final third became noticeably less distinct and harsher on all three cigars—but overall, I found the V21 is a well-rounded, enjoyable smoke, although you may need to put it down a little earlier than you normally would with cigars of this size.