In 2013, General Cigar Co.’s CAO brand launched a line called Flathead that drew from the automotive and motorcycle worlds for its inspiration. The original CAO Flathead featured a Connecticut broadleaf wrapper over a Nicaraguan binder and fillers from the Dominican Republic and Nicaragua.

The line went on to add a number of extensions, and in 2019, another joined that group, the CAO Flathead V19. This new blend uses tobaccos from Connecticut for both the wrapper and binder. The outermost leaf is a broadleaf varietal, while the binder is habano. Fillers are from the Dominican Republic and Nicaragua, with the goal to create a fuller bodied version of that original release. 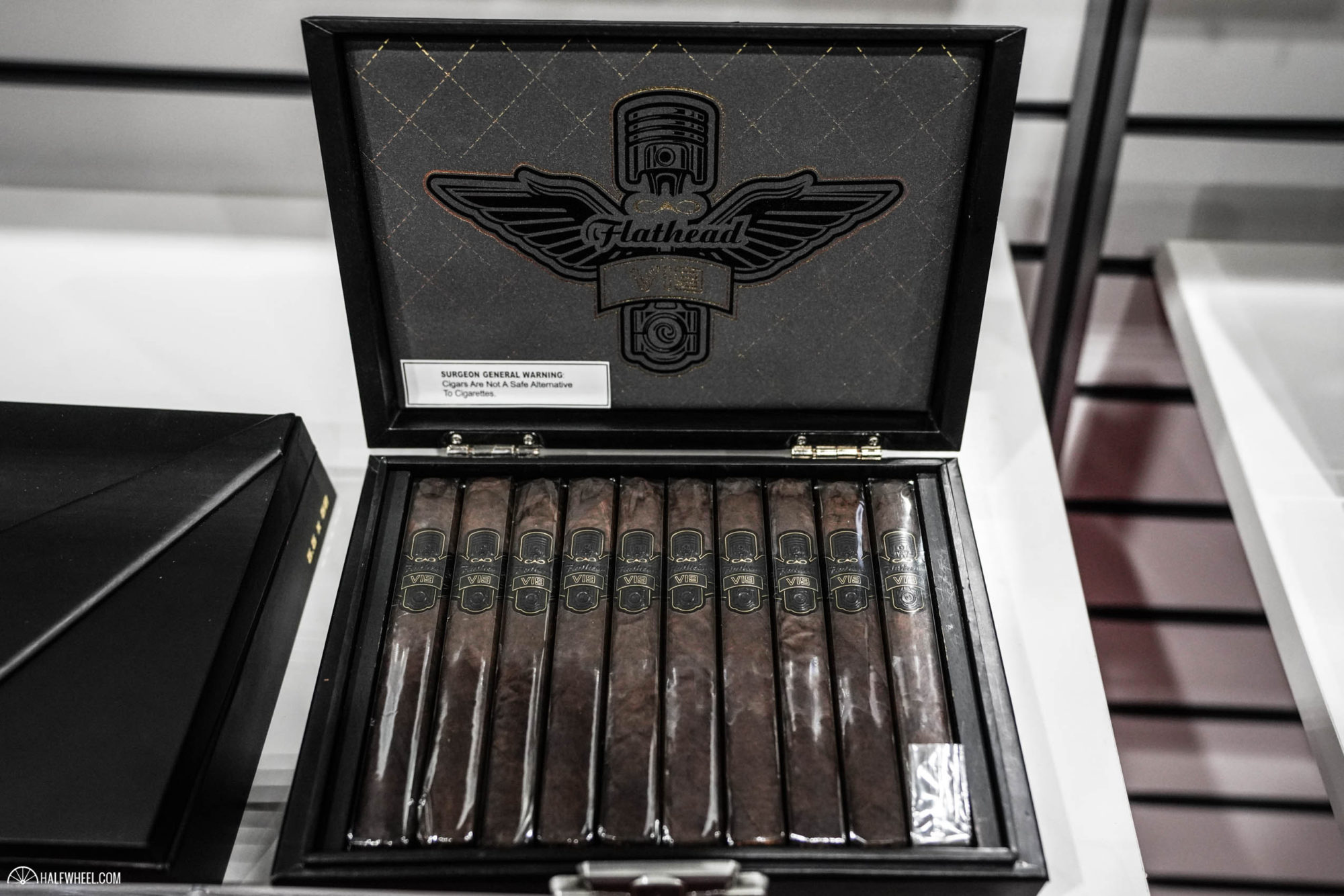 A press release explains how General developed the amped up version of the Flathead:

Ricky (Rodriguez) and the team gave each of the leaves an abbreviated fermentation to lock in the tobacco’s native flavors and added a longer aging process to refine them. By painstakingly watching over the tobaccos and working with small batches, they were able to create the CAO Flathead V19

“For V19, we wanted deep flavor and power, the kind of cigar that demands your attention, just like a classic car or motorcycle does,” said Rodriguez in a statement to halfwheel. “This is the cigar for the CAO smoker who likes the boldest blends in our line.”

The line is available in two sizes. 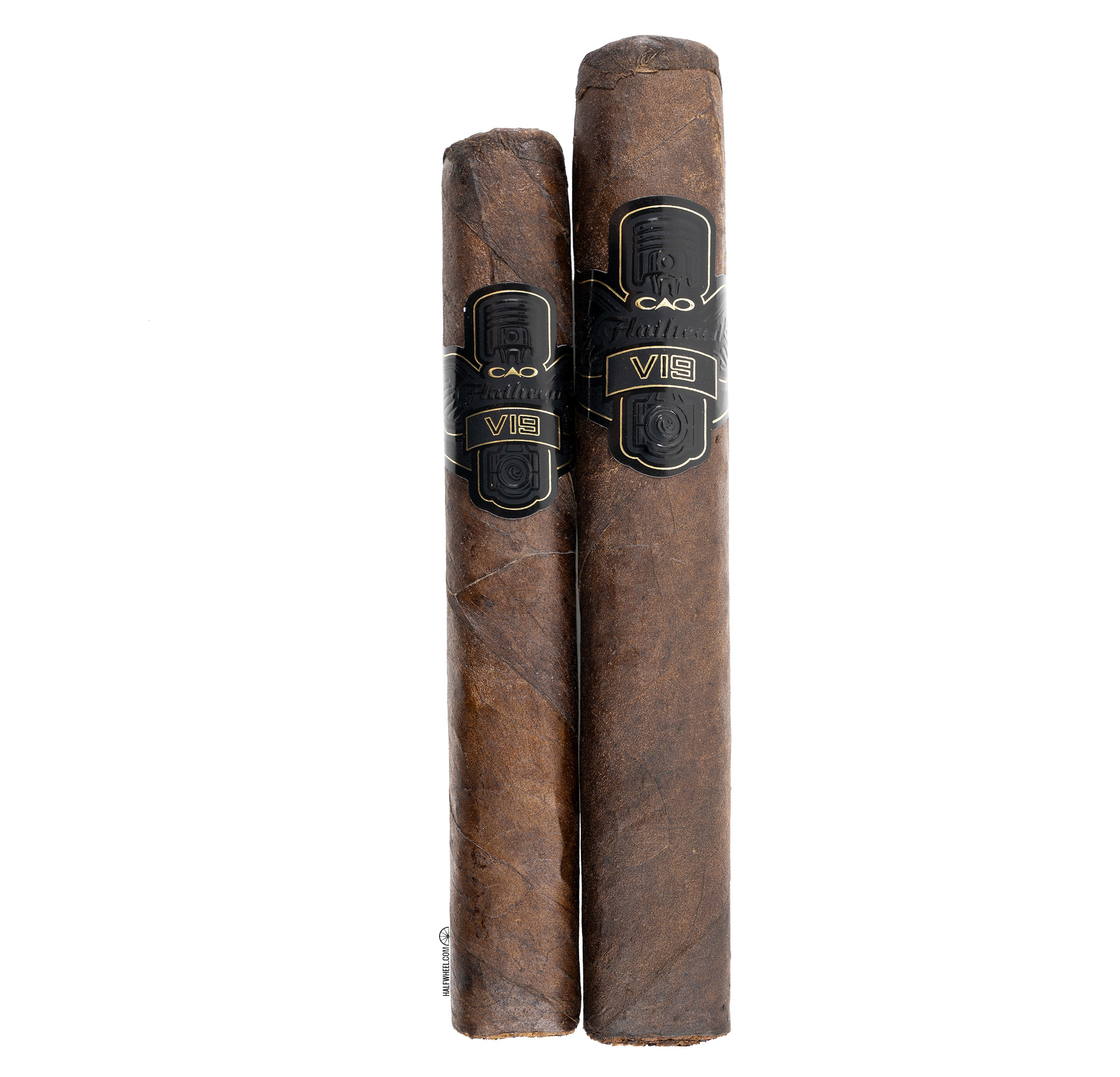 Production is limited to 2,350 boxes of each size. 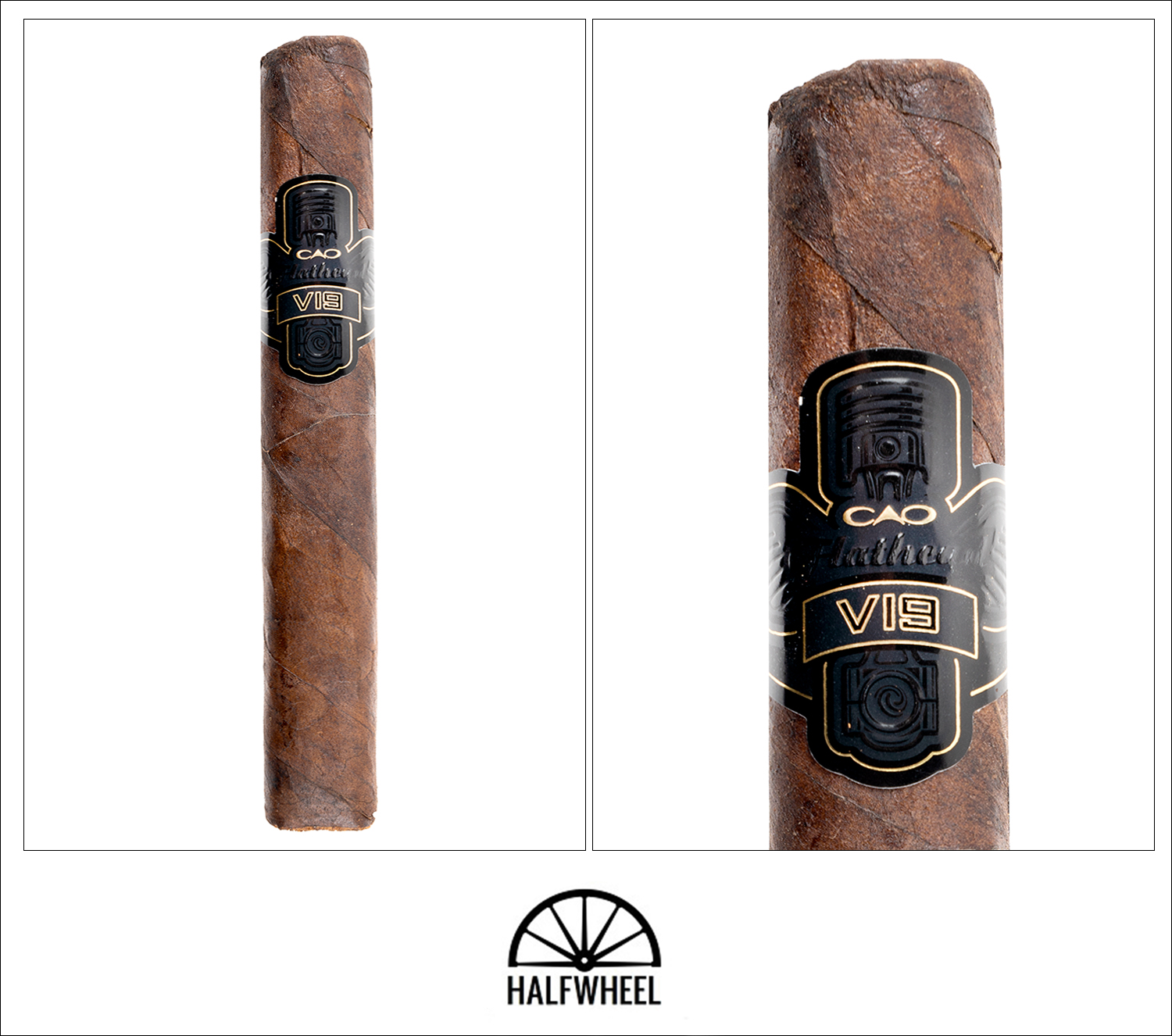 The CAO Flathead Camshaft V19 has a few things about its look that make it distinctive; first, the head has been flattened quite a bit, with the cap draping a bit imperfectly over the shoulders as a result. Second, the cigar gets a pretty firm box press that really squares the edges. Finally, the wrapper is a dark brown with a generally dry, gritty texture on the fingers, though one sample is definitely the outlier in terms of oils. Its hue makes it very easy to see the seams, while a few veins add to the visual depth, all of which combine to present a distinct looking cigar. The roll looks pretty good and the cigars seem consistently filled, though there are some visually uneven spots that seem to be caused by the veins of the binder showing through. When I smell the foot, I’m greeted by subtle aromas of raisins and a bit of white pepper, the latter varying more from sample to sample. The cold draw is quite good with airflow, offering just a touch of resistance but no impedance. There’s a bit of milk chocolate here though it too is subtle, while a bit of rocky earth and black pepper follow behind and generate a tingle on the taste buds and lips.

The opening notes of the CAO Flathead Camshaft V19 are thick and chewy, though not particularly defined in terms of big flavors or strength. There’s a thick chocolate note that reminds me of hearty brownies in the early going, with some black pepper sitting well in the base of the flavor and providing occasional tingles. The retrohales are the most complex, vibrant and rewarding, definitely a yin to the yang of the flavor. Some additional black pepper comes in after I knock the first clump of ash off, just shy of the one inch mark as it was looking like it was going to drop on its owner sooner than later. It’s here when the profile seems ready to take its first step forward and really wake up, though that launching point varies across the three samples. The profile gets into a groove towards the end of the first third, with a thick and chewy smoke that offers chocolate, earth and black pepper, while retrohales continue to deliver a brighter expression of the same components. The draw, burn and smoke production are all quite good.

The second third of the CAO Flathead Camshaft V19 continues where the first third left off, but not long into it I get a bit of peat in the aroma, reminiscent of the peatier Scotches I’ve tried. It’s a bit smokey but focuses more on the core aromas of the source material, a really clean expression that adds a lot to the aroma but sticks around all to briefly. In terms of strength or boldness, it’s generally not until the midway point that I get my first taste of such an experience, though one sample gives a bit of a preview earlier. The chocolate brownie note seems to warm and liquify, the earth slides over a bit to make room for it but doesn’t completely disappear from the profile, and black pepper stays fairly prevalent, a change that does give the cigar a more upfront flavor profile on each puff. Where it hasn’t shifted is on the retrohale, as the pepper here is bright, near-dominant and ready to add some vibrancy. The profile is now nearing full-bodied but stays balanced and very enjoyable, while the construction remains fantastic and problem-free. Other than the buildup, the CAO Flathead Camshaft V19 has been fairly consistent in terms of its flavor profile and strength levels through the first two thirds, so I easily notice a bit more pepper and strength at the start of the final third. The smoke gets to be a touch more of an irritant to the eyes as well, so it might be good to make sure you’re on the right side of the fan or breeze. After the flavor dries out in a few spots, the pepper and earth can turn a bit aggressive on the palate and throat, grating it rather than stimulating as it had done earlier, though this effect varies among the samples. Retrohales are a bit more pointed now, and while it’s not harsh on the nostrils, the sensation has appreciably changed. The cigar finishes on a rich and chewy note, showing notes of earth, black pepper and chocolate brownie as it comes to a close with just a small nub of tobacco left unburnt and no technical problems whatsoever. While I don't have sales numbers, the CAO Flathead line has seemingly been very well-received since its debut in 2013, and while I haven't smoked lots of the other sizes and blends, the ones I have had generally show why: a very palate-friendly profile that offers plenty of stimulation without overbearing strength, all complemented by a fairly agreeable price. Those same attributes apply here: the cigar rarely takes a puff off from delivering steady, tongue coating flavors, yet never drops a nicotine bomb or lets things out of control. The construction was nearly impeccable, with the only requirement being taking a regular puff to keep it lit. Compared to the regular production options the price is a bit high, especially if you're looking in the right place, but the overall experience seems to merit it. I could have used a bit more refinement and vibrance from the flavor at times, though it didn't miss by much. A very enjoyable cigar that makes for a nice addition to the CAO Flathead family.