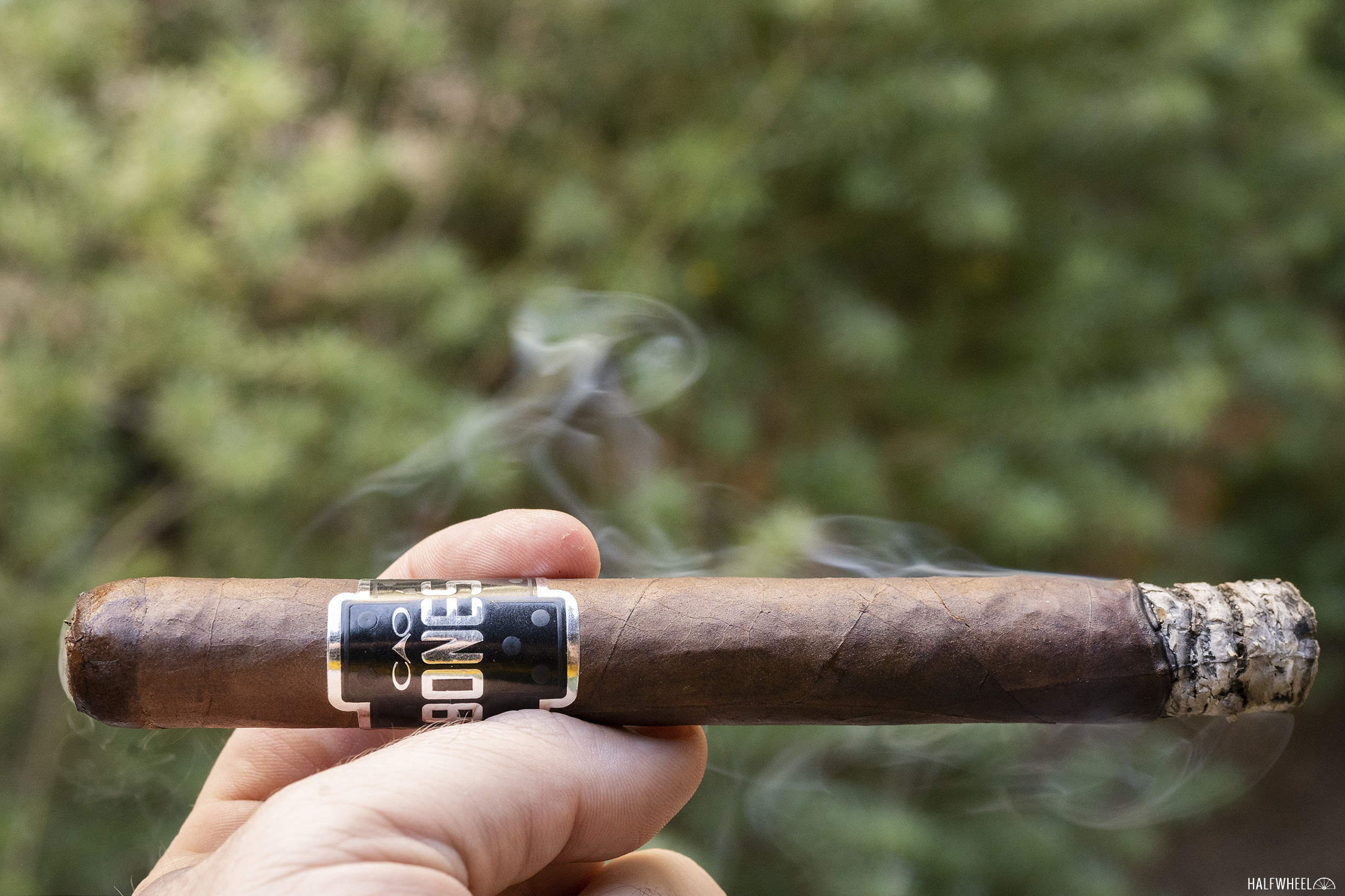 In the General Cigar Co.-owned chapters of CAO’s existence, the brand has not only been known for some solid cigars, but also for the inspirations behind them. CAO’s creative team has drawn on concerts, motorcycles, natural disasters, holidays, travel and a number of other themes for its cigars.

Which is why it came as no surprise to see the brand do the same for its most recent release, this time turning to a pair of games seemingly known the world over, dominoes and dice, as the inspiration for CAO Bones.

The line gets its name from both games, as early versions of both dice and dominoes were originally made from animal bones or ivory. As for the four vitolas, they get their names from styles of dominoes games. The blend uses a Connecticut broadleaf wrapper, Connecticut shade binder, and a filler blend of Nicaraguan tobacco of undisclosed varietal, along with Dominican piloto cubano and Honduran tobacco grown in the Jamastran and La Entrada regions. The line is produced at the STG Estelí factory in Nicaragua.

To dress up the release, each box comes with a set of dice, while the inside of the lid is covered in felt for throwing dice. The CAO Bones Matador is a big, beefy vitola that is wrapped in a meaty brown wrapper which has a few small but noticeable vein and a generally dry and fine grit feel on the fingers. While there is a fair amount of difference between the black on the band and the dark brown shade of the wrapper, they do complement each other well. It is rolled very firmly with little in the way of give, though one sample feels like it doesn’t have much density and proceeds to show a surprisingly fragile wrapper. The foot has aromas of very freshly cut wood, a bit damp and rather fragrant. There’s a bit of the sappy sweetness aroma that comes from cutting such wood as well, and the combination is very enjoyable, with just a bit of pepper accenting things. The cold draw is near perfect with just a bit of firmness in the airflow. The flavor is more subdued than the aroma and doesn’t show much if any of the woodiness. There’s the standard taste of tobacco as well as a bit of sweetness that has a very slight strawberry taste, though don’t think this is as thick or prominent as jelly. There’s also not much in the way of pepper to be found here, making for an overall very neutral flavor.

The first third of the CAO Bones Matador gets off to what could be called an unassuming start both in terms of the flavor and its intensity. A familiar and fairly mild combination of woods, earth and pepper open things up, though each is light on its own as it the resulting combination. If any component will stand out, it’s the black pepper, both on the palate and retrohale, but it rarely gets into the pepper-bomb territory. One area where the Matador does well is its body, surprisingly medium if not medium-full in the early going, offering plenty of smoke for the senses to process. When the first clump of ash drops off, there is a very enjoyable creaminess that comes along to really open up the flavor, with white pepper joining the black pepper and beginning to shine on the tongue and through the nose. It’s still not a pepper bomb, but it is certainly pepper-forward and even pepper-dominant, with a bit of the broadleaf earthiness making up most of the second wave of flavor.

The CAO Bones Matador gets its second third underway with a slightly drier smoke, enough that it results in the tongue and other parts of the mouth feeling a bit dehydrated. It’s mostly a fairly linear progression, though there is the occasional fumbling of flavors and aromas. Once the CAO Bones Matador rights itself, the earthiness backs off leaving a thinner flavor but still plenty of body, while a very good pepper drives retrohales. My palate’s first flavor is an expression of woodiness that has a touch of harshness that creeps down the throat and continues the mouth-drying trend a bit. While the earthy terroir of the Connecticut broadleaf begins to emerge at the midpoint, the flavor also picks up a number of other flavors around the edges that are tougher to identify. It’s almost a mix of all the terroir of the leaves, and while bright and fairly intense, it’s not a heavy sensation on the tongue. There’s no sweetness or anything else to provide balance, costing the flavor a bit of balance and diverse complexity. That said, there’s plenty of flavor and pepper to keep the palate engaged, sitting at medium-plus, while body and strength are medium if not medium-minus. Construction and combustion are problem-free. The final third of the CAO Bones Matador opens up with a bit more robustness and gruffness, something that had been building at the tail end of the second third but which is now much more part of the overall experience. As with everything, it seems to fluctuate from sample to sample, but it’s a consistent shift, and for the most part it’s still friendly to the palate. There’s still some woodiness, though it has lost the dampness and has the more concentrated taste of bark. There’s also a bit of chalkiness, which seems to want to keep the mouth-drying aspect around, even as the rest of the profile wants to abandon it. Faint touches of creaminess come in to help return the smoke to a more agreeable place, though there doesn’t seem to be quite enough to fully accomplish the task of giving the cigar the complexity and fuller body that would seemingly really push this cigar up a level. The final inches of the CAO Bones Matador finishes with a robust yet clean earthiness, incorporating an ideal amount of pepper but shedding most if not all of any harsh effects, even with a lingering finish. While the flavor on its own is still medium-plus in intensity, the cumulative effect makes it feel a bit more than that. Body still seems to lag behind, around medium-minus, while strength is a bit closer to medium. The technical performance is still very good, with no appreciable issues in any of the samples. After smoking three of the CAO Bones Matadors, I’m left with the thought that there can be too much of a good thing. While the CAO Bones isn’t the most complex or flavor-spanning blend I’ve smoked, it is generally enjoyable, and there are a number of spots where the profile is quite good. There’s plenty of dry earth, black pepper and wood to keep your palate engaged from start to finish, though in the case of this 7 1/4 inch long cigar, that becomes a bit of an arduous journey for the taste buds. If nothing less, that extra inch or two simply doesn't deliver much in the way of added enjoyment. I’d still recommend giving the CAO Bones a try, though for my palate, the robusto vitola seems just the right amount of flavor.