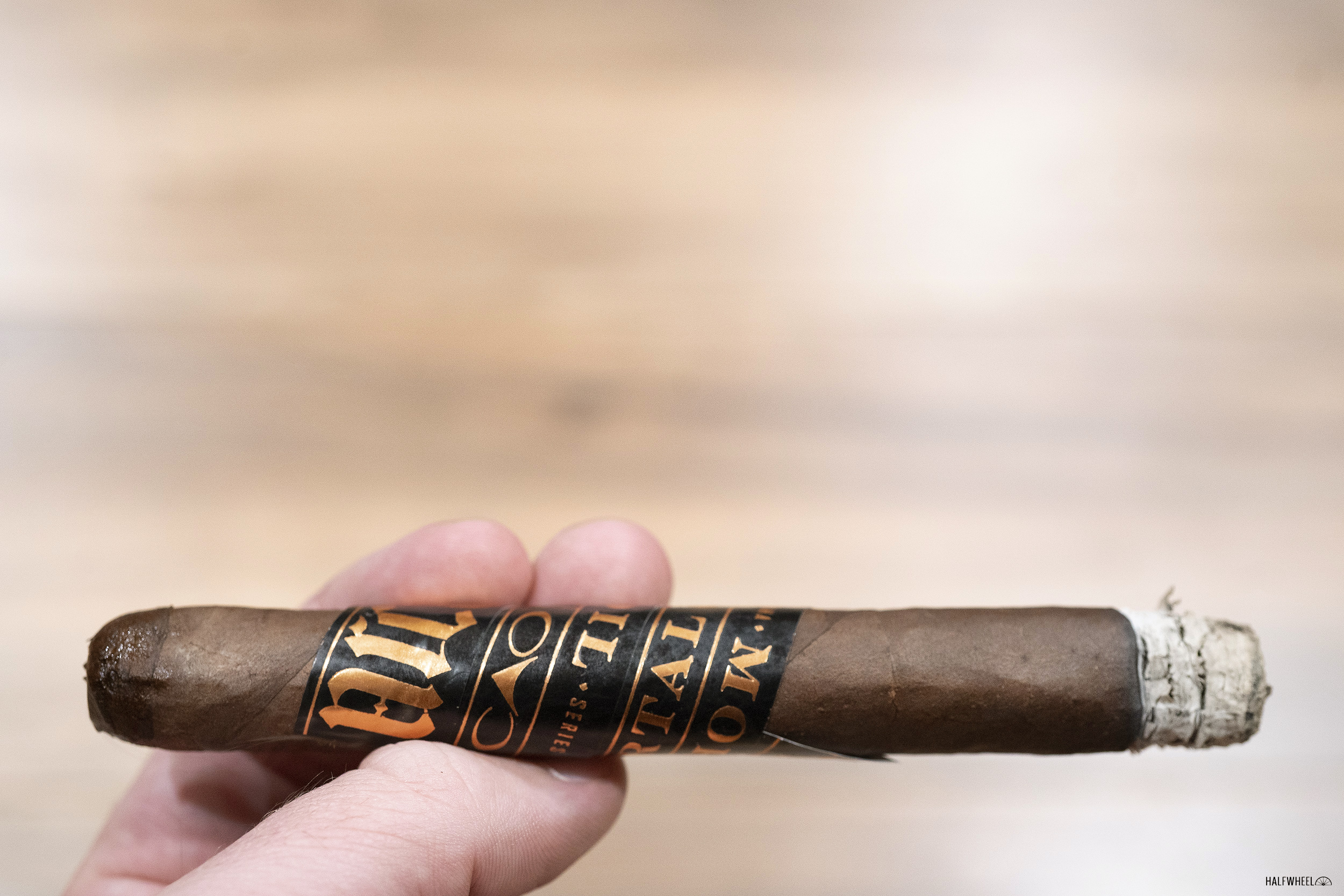 Among the numerous brands in the General Cigar Co. portfolio, I find myself consistently intrigued by CAO. It’s not only a brand that I still remember as being a young, hip and boutique brand when I got into smoking cigars, but as one that has steadily grown into a humidor staple of a massive cigar company. Yet it also maintains a bit more of an edge than the rest of the portfolio and seems to be able to transition easily from seemingly disparate projects.

It’s this versatility that has me intrigued whenever a new CAO line gets announced because I’m fascinated by not only the brand’s ability to leap between themes but also that it is allowed to do so by people with branding expertise who might suggest that it’s best to stay in one’s lane. 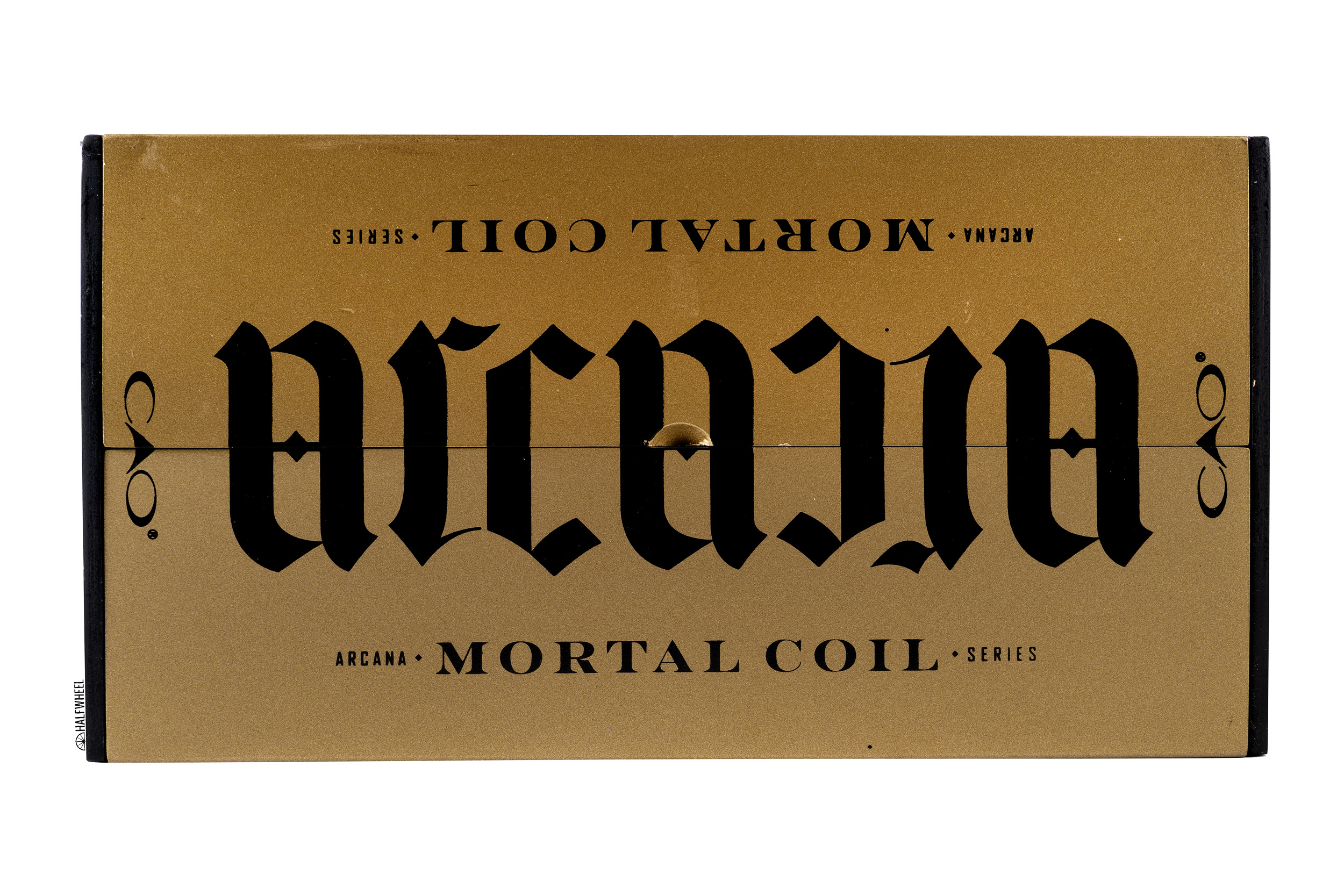 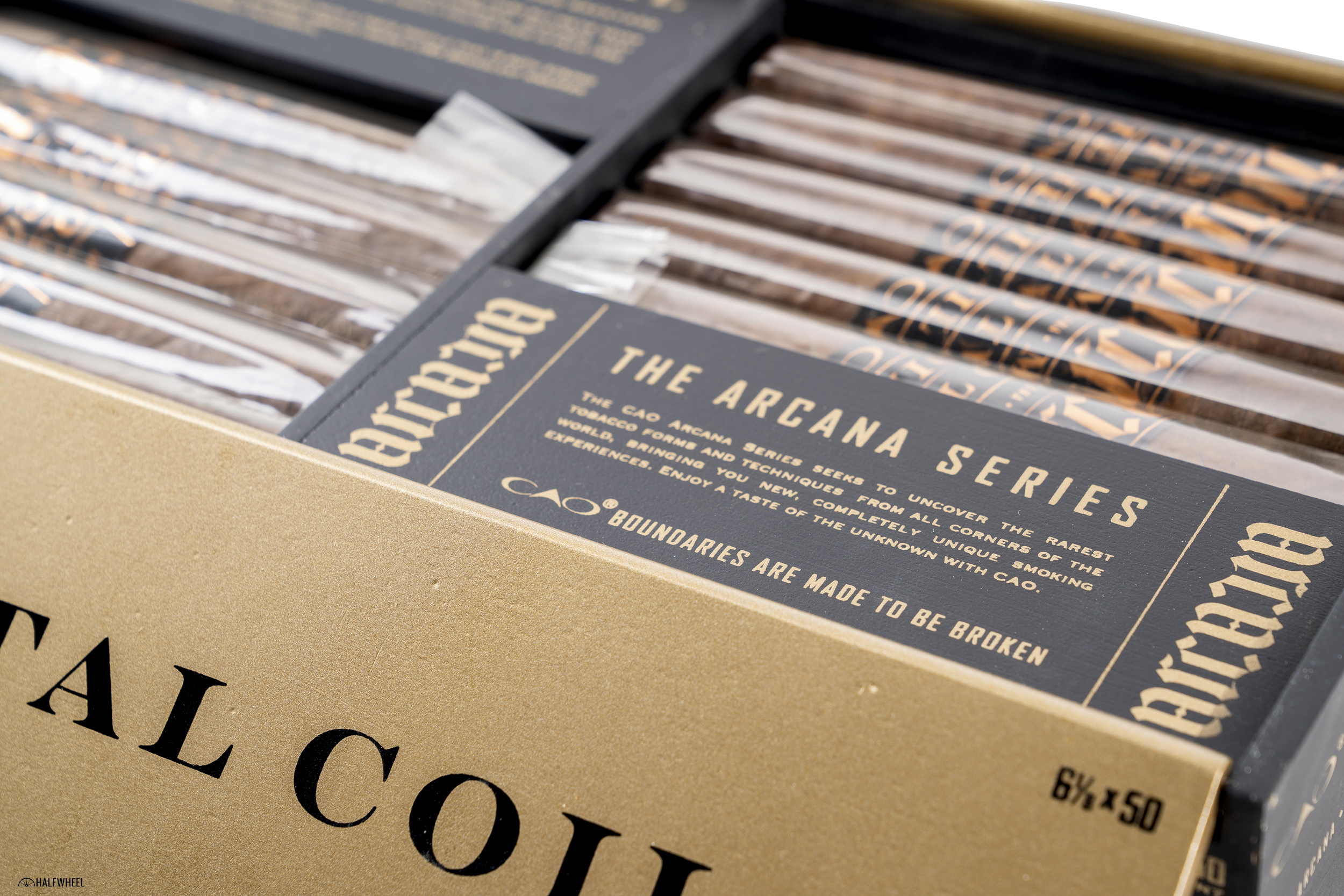 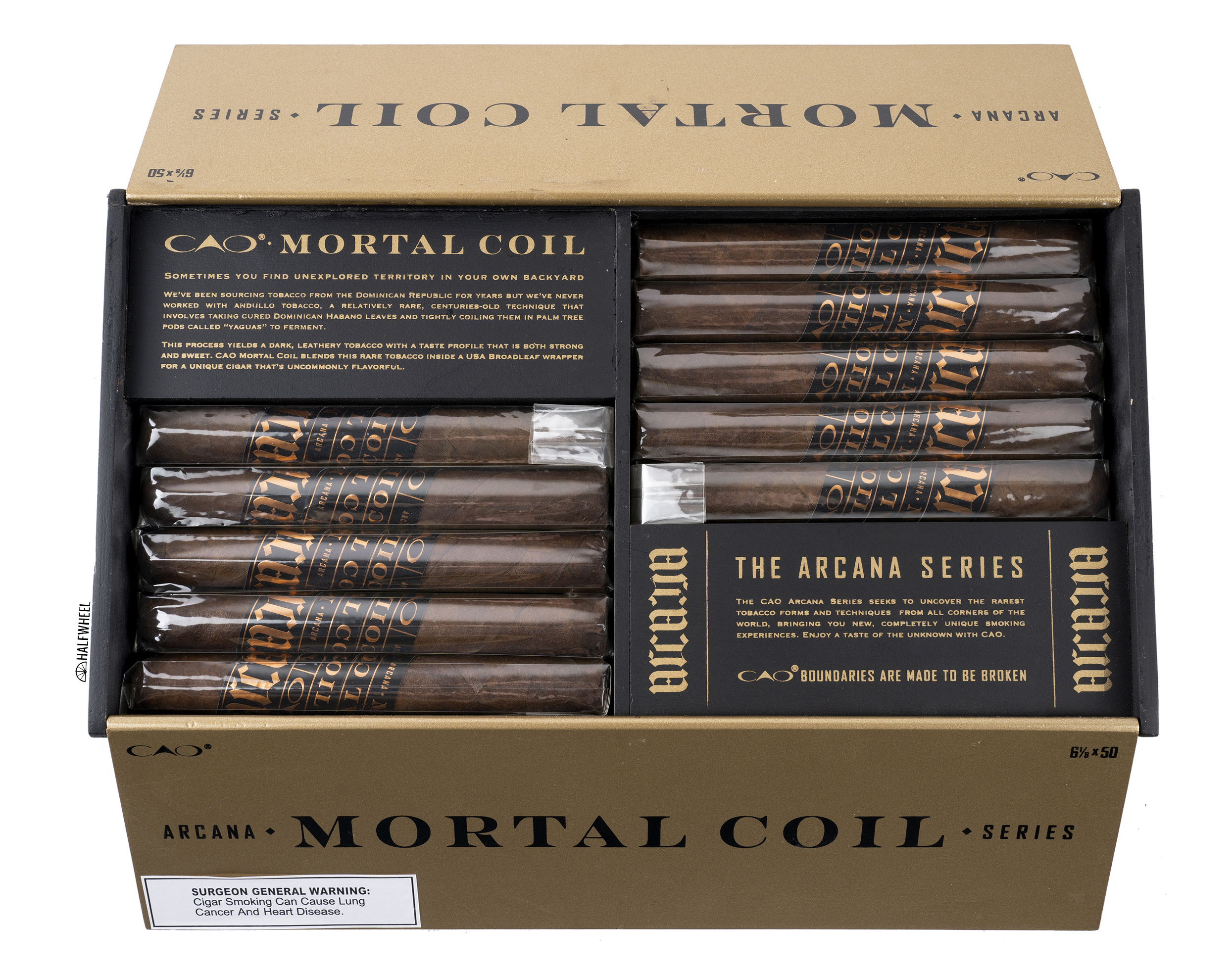 The most recent venture for the CAO brand is the Arcana Series and its first release, the Mortal Coil. For a cigar with such an interesting name, the company hasn’t spoken much as to its meaning. What it has focused on is its use of andullo tobacco in the filler, a fermentation technique that is found primarily in the Dominican Republic. While most tobacco leaves are placed into large piles for the process, andullo tobacco is wrapped with palm tree pods into long rolls called yaguas after the leaves are harvested. The pods are bound tightly with rope and rooted into the ground, which results in a densely packed log of tobacco that is known for delivering a concentrated and often sweet flavor. 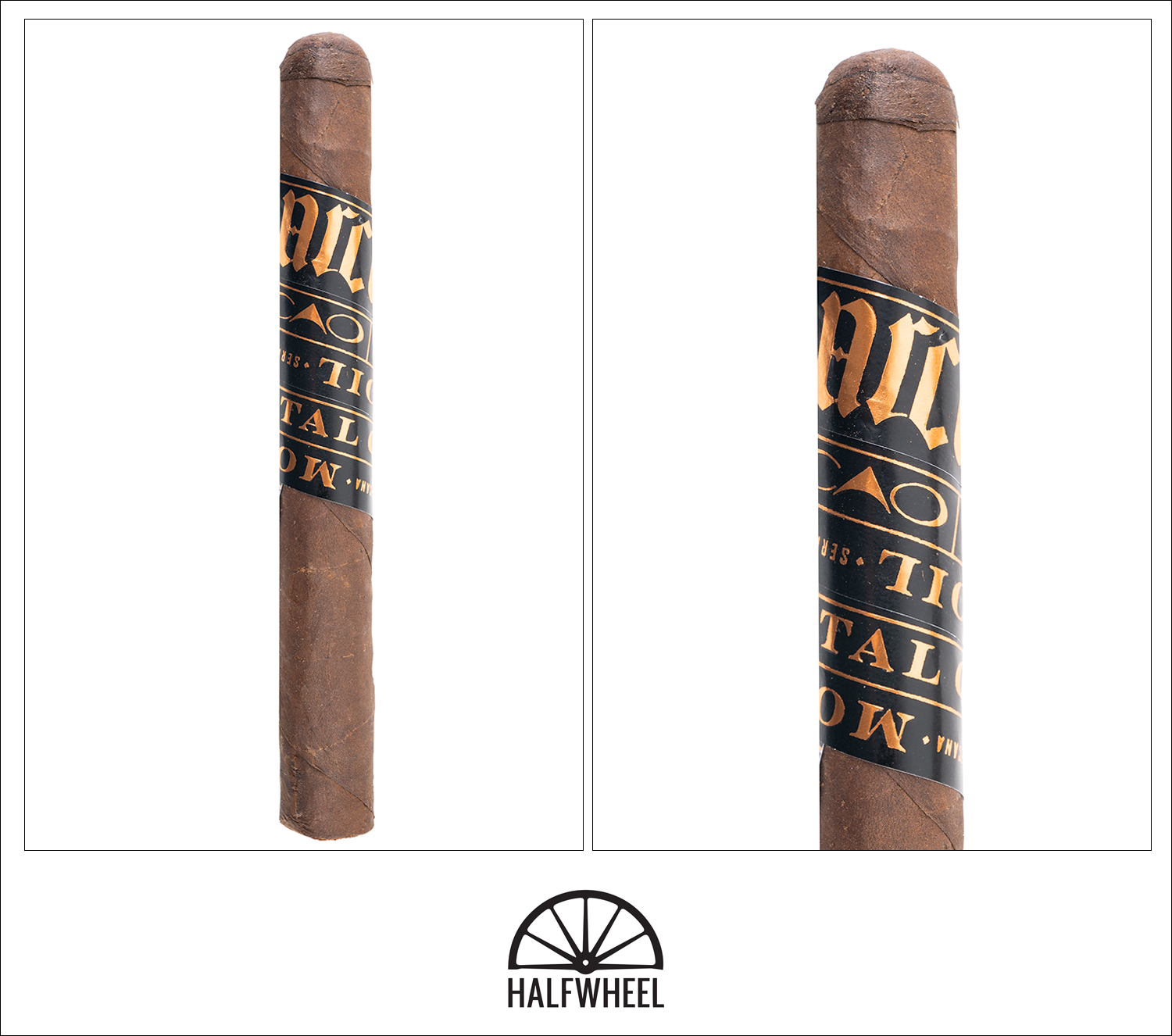 The CAO Arcana Mortal Coil has a couple of layers of shine happening; the copper on the band does a good job catching the eye, but the wrapper leaf has an impressive amount of oiliness to it that does that job as well. It’s an interesting combination of colors between the dark, meaty brown of the wrapper and then the black and copper of the band, one that seems to play better when the wrapper leaf is on the darker side of the scale. There’s a ton of tooth and a couple of small veins to the leaf, the former a bit more impressive should you take the time to look at it closely. The first sample has what feels to be a real soft spot right at the midpoint, though I’m also wondering if the band might have something to do with it as it seems thicker than a typical band. The cap also looks to be more heavily applied than in other cigars; the seams stand out both due to some color contrast and some jagged cuts of the leaf. The foot of the first cigar has a real damp aroma to it, so much so that between that and the soft spot, I’m wondering if I’m going to have some dry boxing to do. There’s enough pepper to induce a sneeze, while what’s left reminds me of various leftovers, the first being beef chow mein, combining a bit of meatiness, noodle and steamed vegetables. One sample also has an aroma of a freshly opened pack of sunflower seeds. The cold draw is much drier and has notes of saltine crackers, a bit of light pepper, some deli counter turkey slices, and just the slightest bit of sweetness on the lips and tip of the tongue. There is also a noticeable tingle on the lips from the wrapper.

The first CAO Arcana Mortal Coil that I smoke starts off decently, with maybe a touch firmer draw than expected but nothing problematic. Yet by the time I’m just about 10 minutes in, I’m getting a pronounced note of tar on the tip of my tongue and sure enough there is some dark brown ooze coming out of the head of the cigar. The sour/chalky/metallic/bitter taste came out of nowhere but was unmistakable enough that I knew it had to be tar before I looked at the head. That forced me to clip off a bit more of the head, which both rid the cigar of the problem as well as opened up the draw a bit more. The smoke has dried out a bit but is still enjoyable, while retrohales are respectably peppery yet far from overpowering. There’s a bit of a dry candy flavor on my tongue at the moment, reminding me of certain mints I seem to find mainly at restaurants. The other two cigars don’t suffer this initial stumble, and while one is a bit tamer, the other has a damp, slightly earthy flavor that ventures into damp tree bark at times, with a bit of pepper finding its way to the surface from puff to puff. There are a few points where I get the distinct notes of andullo tobacco, an almost juicy accent that has a bit of a ligero burn on the tongue but also some residual sweetness on the finish. Flavor has been in the medium to medium-full range, body has been medium-plus but trending towards a medium-minus density, while strength is below medium for the moment. Construction is very good overall, with good smoke production and combustion, while the burn line is even for the most part.

The transition to the second third brings back a bit of the chalkiness as the flavor stays fairly dry and with a lighter body than I might have expected, the continuation of the trend I noted above. In the case of the third sample, the tar makes a reappearance, something I’m disappointed to find and have been on higher alert for, given the experience with the first sample. The smoke tries to pick up some creaminess in the early goings of the second third and does a pretty decent job at it, although it can’t quite overcome the dryness that still dominates the smoke. There are also some flirtations with chocolate, in one cigar quickly alternating between a Hershey’s bar and cocoa powder. Regardless, a change in the profile is definitely offered in the second third, with varying results among the three samples. The final puffs of this section bring on what I would say is the most distinctive flavor of the cigar; while still rooted in mix of earthiness, black pepper and some chocolate, there is now a bit more of an enjoyable gruffness to it, and I’m wondering if the andullo tobacco might be contributing more to the mix than it had previously. It’s a flavor that continues to be on the dry side of the spectrum and now elicits a more pronounced physical sensation in the mouth and top of the throat. Flavor is medium-full, body is medium, and strength is building from medium to medium-full. Construction remains very good, with flavor at medium-full, body around medium, and strength still shy of medium. 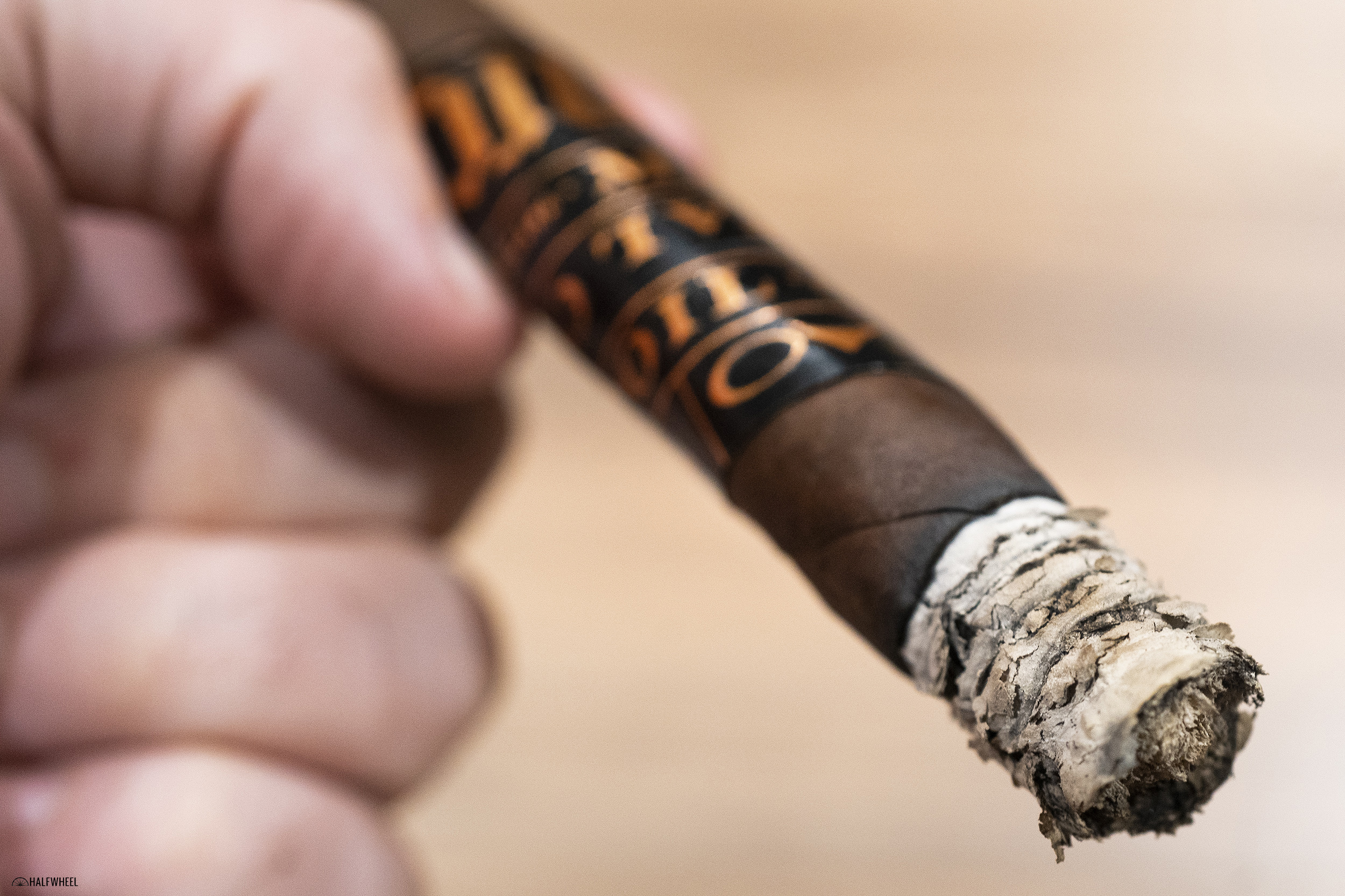 There are a few puffs around the start of the final third that remind me distinctly of that first flavor from a handful of unflavored and unsalted sunflower seeds, as its dry, a bit dusty, and has that slightly gritty texture before the moisture of the mouth takes over. Whereas the flavor and body in the first third could be described as damp, thick and chewy, the final third has moved the body to a bit lighter and thinner place, while the flavor is still fairly vibrant but in a drier expression. By the time each sample is in its final third, I find myself struggling to really pin down the flavors, or more specifically the result of the combination of flavors. It’s not completely unique, but it is distinctive. The final two inches or so bring about some more pronounced woodiness; it’s not the cleanest expression I’ve ever tasted, but it pairs well with the dry earth and cocoa that the cigar is offering. It’s also the most complex flavor thus far, which is what brings it to my attention. However, that flavor turns rough pretty quickly, reminding me of burn matchsticks as the cigar comes to a close. Flavor is medium-plus, body is medium, and strength is medium-minus. I’m less concerned about needing to dry box the other samples, which is a relief, as the technical aspects all performed well. 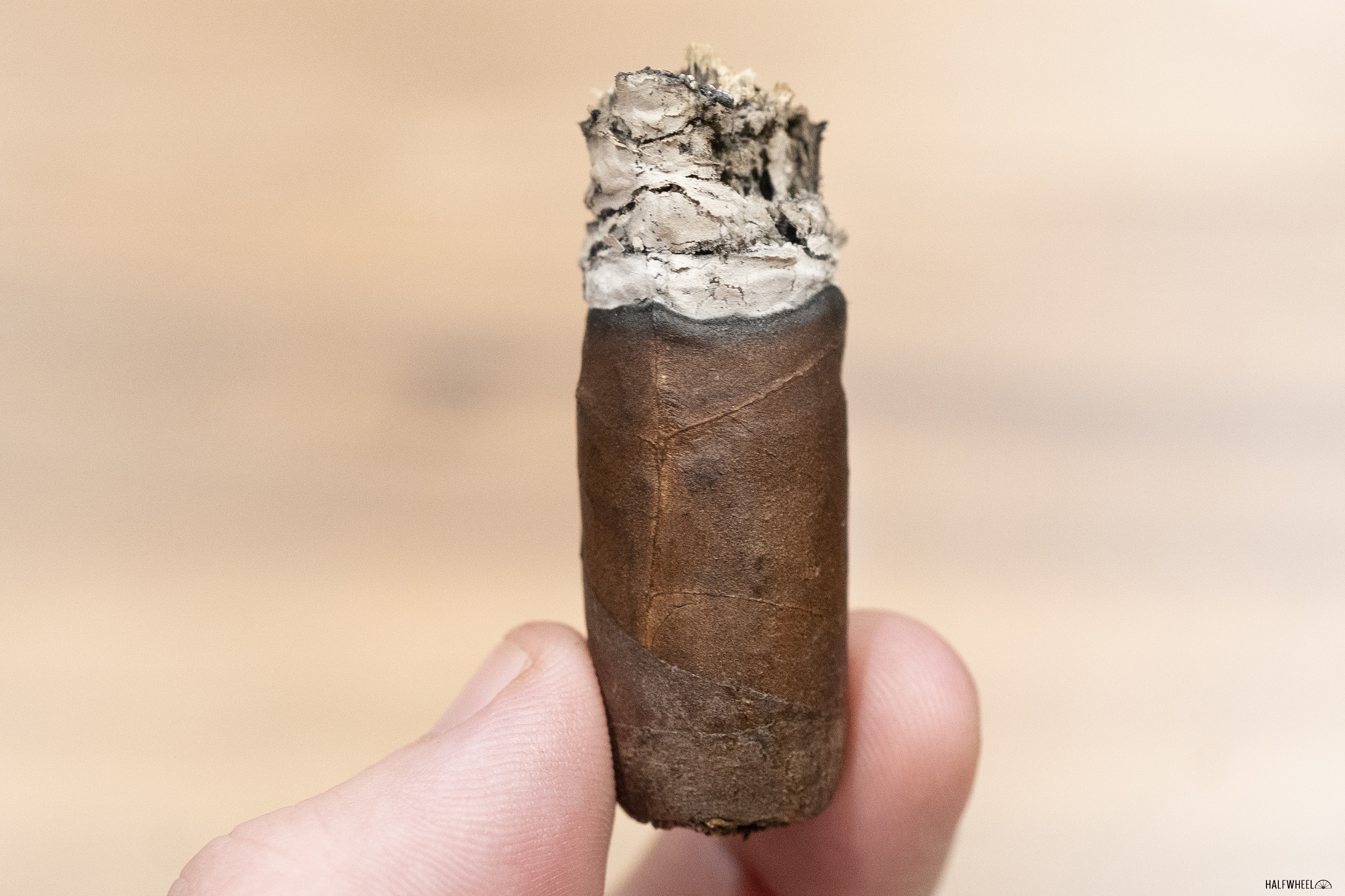 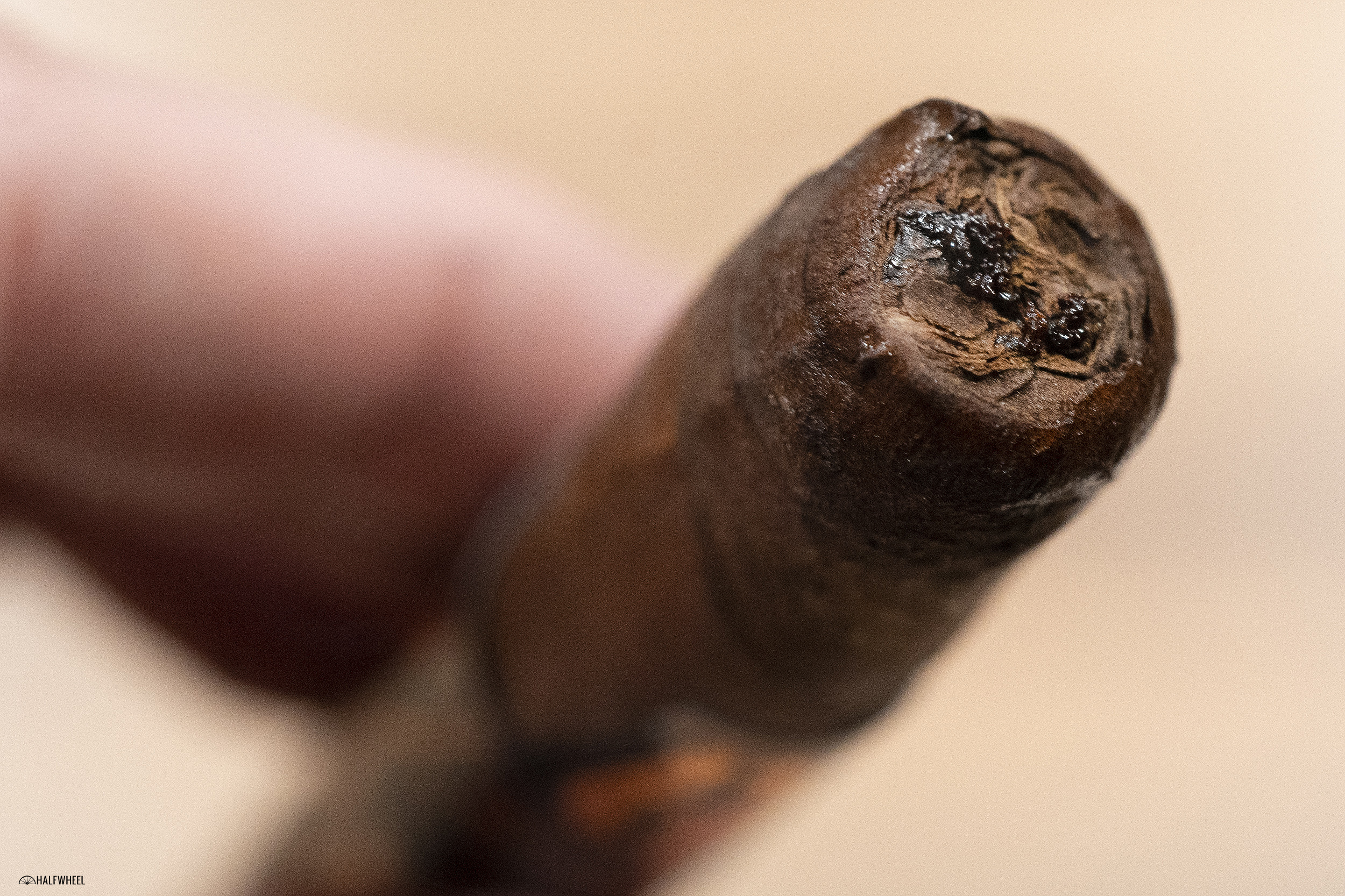 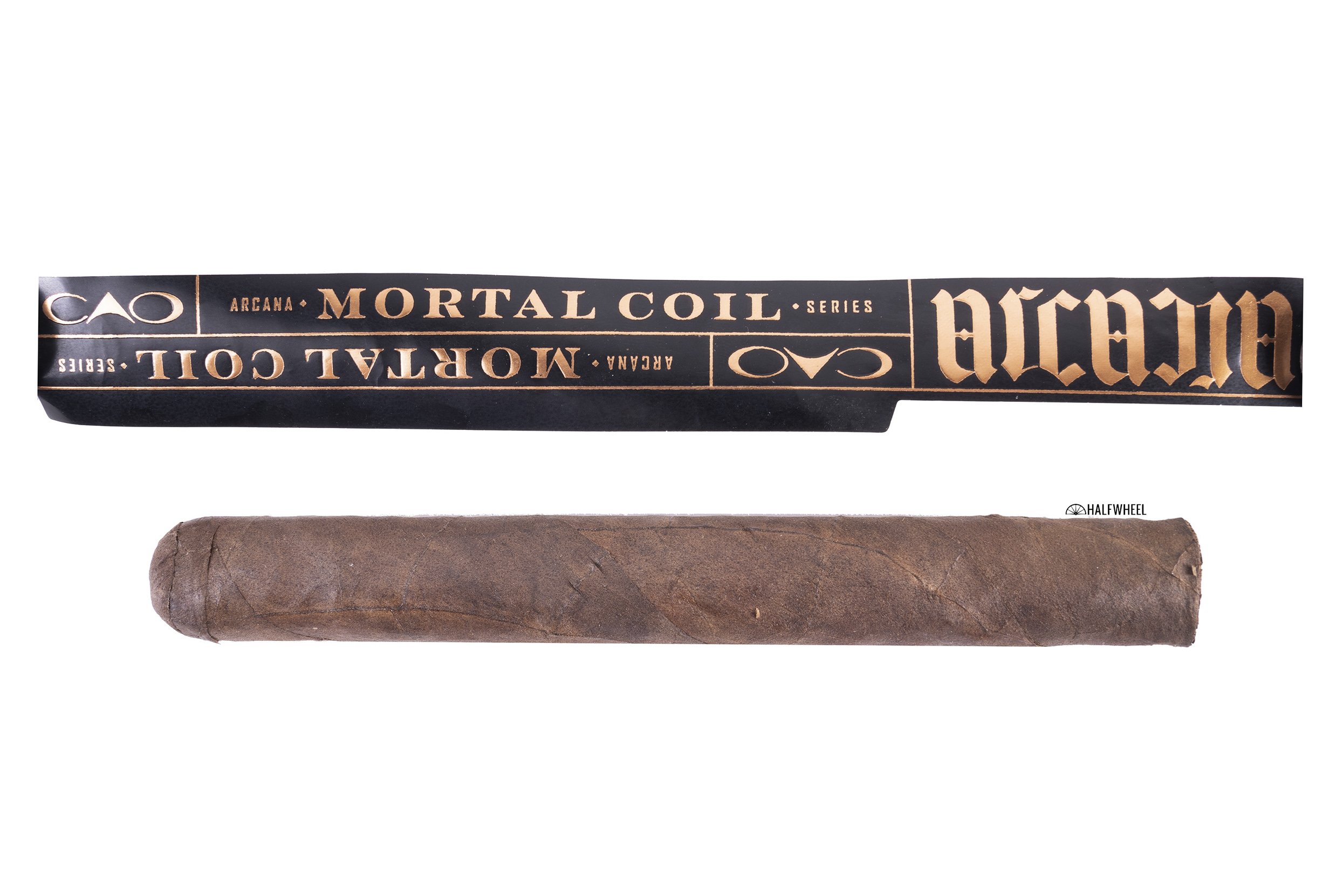 Much like I remember from the first few times I smoked the CAO Amazon Basin, the Arcana Mortal Coil has some familiarity but also enough unfamiliarity that I’m not quite sure how to summarize it in a neat and tidy package. There are a lot of familiar flavors of damp earth, black pepper and some woodiness, along with the drier versions of those in the second half. Yet there are spins and twists on all of them that I’m inclined to attribute to the andullo tobacco and its unique fermentation, namely when the cigar flashes moments of sweetness. I’d certainly recommend trying at least one of the CAO Arcana Mortal Coil if nothing less for what is a generally enjoyable experience—brushes with tar notwithstanding. But even after three of them, I’m still a bit undecided as to what I think of the cigar as something I’d want in my humidor. I do know that I certainly want to try at least one or two more outside of the purposes of a review to see how it hits my palate in other situations and settings.