Blackbird Cigar Co.’s “Unknown Limited Edition” has a name, a blend, and a release date.

It’s called Macaw, it’s a four-country blend, and it is shipping today. The Macaw is a 5 1/8 x 58 box-pressed gordo that the company says uses the best versions of various tobaccos that it uses in other blends. This includes a Cuban-seed Brazilian wrapper—similar to the company’s Cuco and Unkind cigars—over an Indonesian Sumatra binder—the same one the company uses in its Rook blend—and five different fillers. One leaf is from Pennsylvania, while the other four are from the Dominican Republic: corojo, criollo 98 from La Canela, criollo 98 from Mao, and piloto cubano from Villa Gonzalez.

It has an MSRP of $16 per cigar and will be limited to 500 boxes of 14 cigars. The first half of the shipment is heading to stores today—for retailers who pre-purchased the cigar during TPE 2021 in May—and a second shipment will head to stores on Sept. 13.

A QR code is printed on inside of the box and on the back of the band, which allows customers to use the ARitize app, an augmented reality app. Blackbird hopes that consumers will record videos or take pictures of the experience of smoking the Macaw while using the app.

The company says it chose the Macaw name because “their size and vivid Plumage, along with their rather loud behavior make them hard to miss, Blackbird Cigar Co. find too many similarities as to how we feel we represent our brand.” 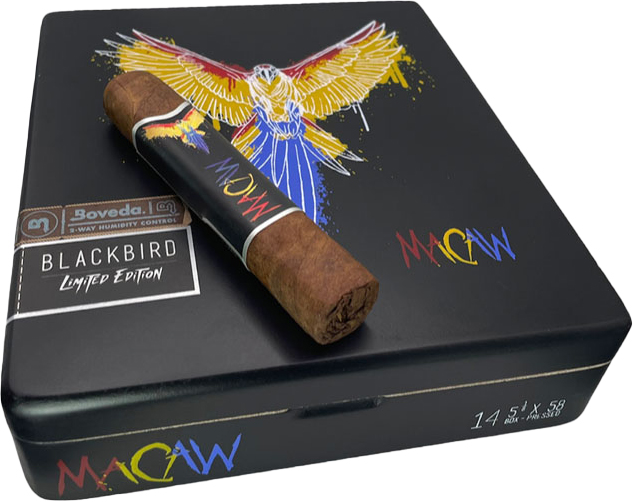 This cigar was announced in May, though in a somewhat strange manner. Blackbird announced some of the details—size, price, production number—but declined to disclose many other details, including the cigar’s name. Instead, the company referred to it as “Unknown Limited Edition,” though Blackbird indicated that it was likely to disclose most of the details once the cigar was ready to ship.