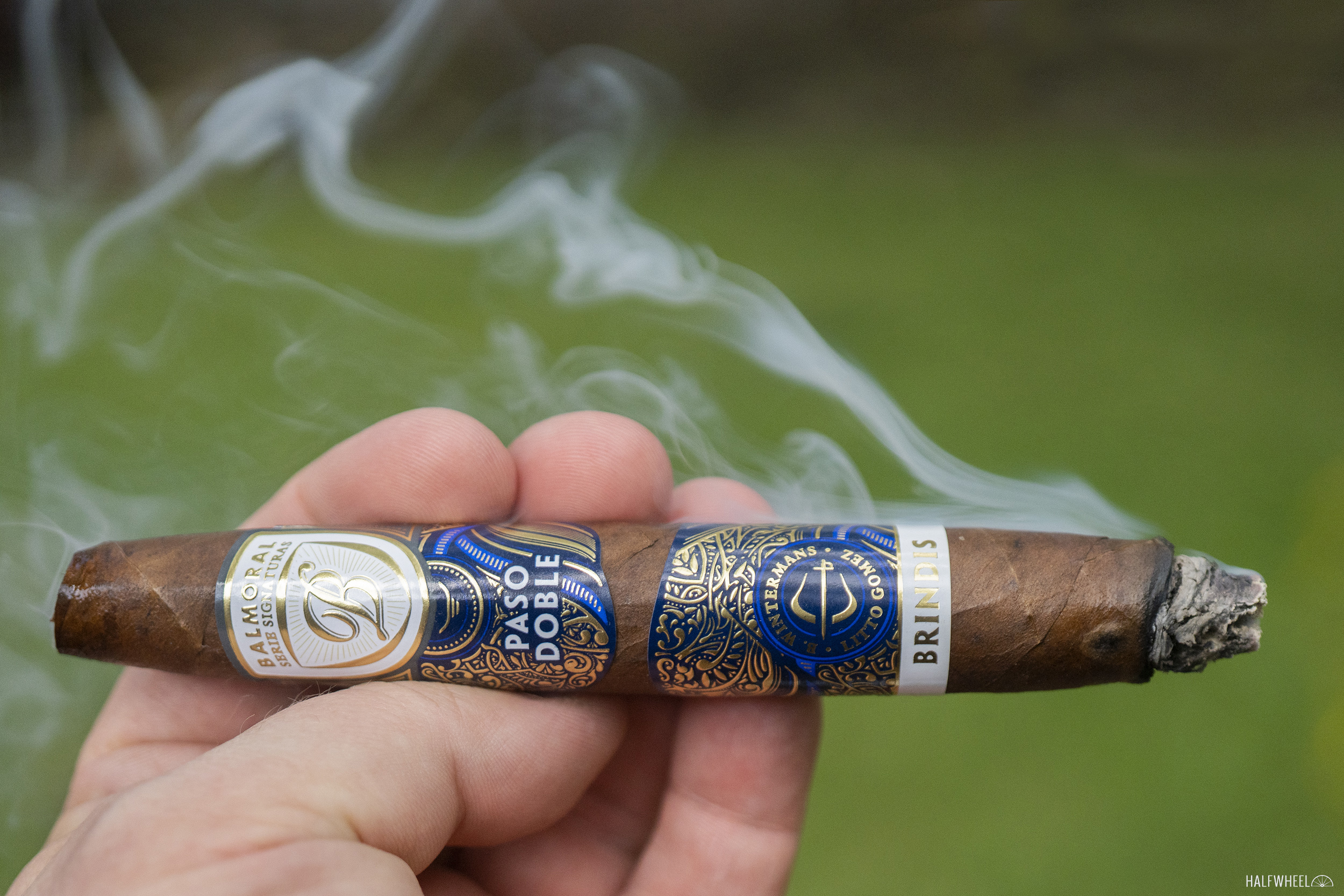 Back in 2018, Royal Agio Cigars launched a fairly ambitious project named Serie Signaturas, a series of what would become two releases that would combine the talents of the company’s Boris Wintermans with other cigar makers in order to produce custom blends. The first release in the series was a collaboration with Ernesto Perez-Carrillo Jr., a five-viola line named Balmoral Serie Signaturas Dueto that was made up of a Nicaraguan cover leaf grown in the Jalapa region of Nicaragua, a Nicaraguan binder grown in Estelí and a filler blend that included both Nicaraguan tobacco as well as Agio’s signature Brazilian mata norte tobacco.

Fast forward to September 2019, when Royal Agio shipped the second installment of the series: Paso Doble. Consisting of only three vitolas, the new line teamed up Wintermans with another cigar legend, Litto Gomez of La Flor Dominicana. The cigar’s name Pasodoble refers to a Spanish military march used by infantry troops which was timed to give troops 120 steps per minute.

“I have a tremendous amount of respect for Litto’s work and the fact that, like me, he is obsessively passionate about pushing the boundaries of what can be discovered in premium cigar blending,” said Wintermans in a press release. “For this special collaboration project, we placed all of our respective, coveted tobaccos on the table and went to work exploring a wide range of unique and exciting blending possibilities, never really knowing the final outcome. I am proud to say that, in the end, we turned a blank cigar canvas into a one-of-a-kind, inspiring discovery in cigar blending for cigar lovers everywhere to enjoy.” 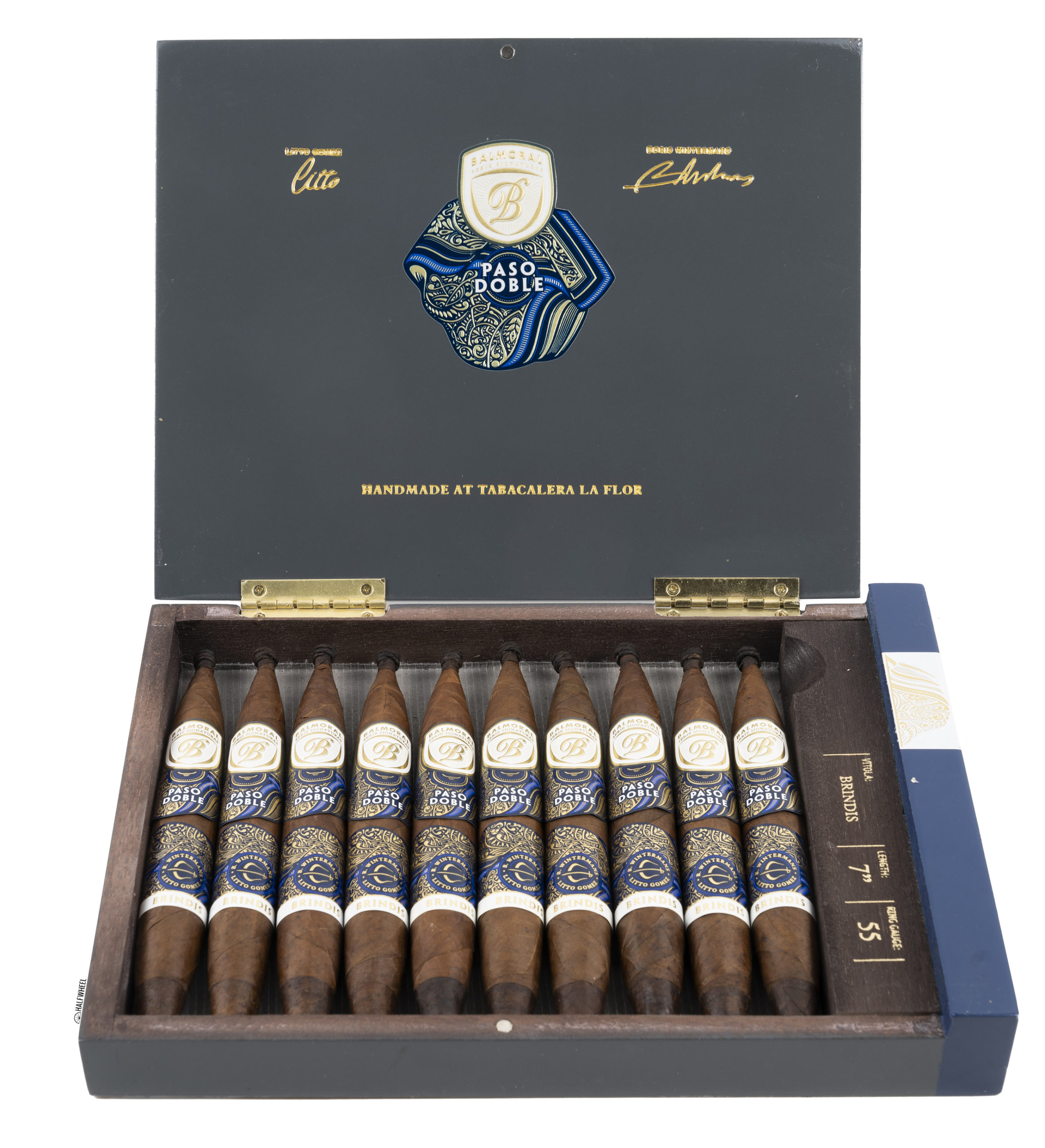 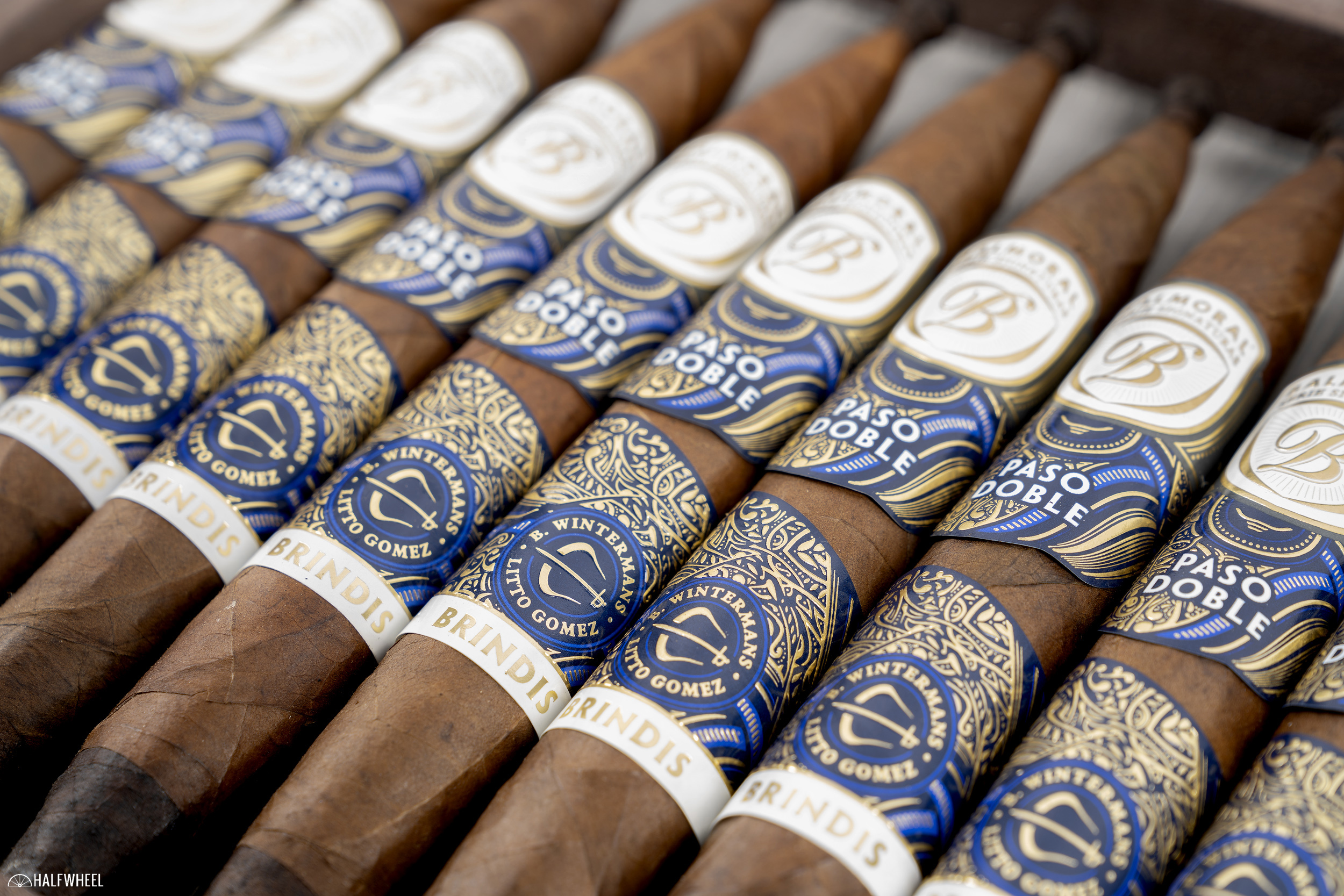 As was the case with the debut release in the series, the Paso Doble was rolled at the guest collaborator’s factory—specifically, Tabacalera La Flor S.A. in the Dominican Republic. With that in mind, it makes sense that unlike the first time around which included mostly Nicaraguan leaves, the second release in the Serie Signaturas is made up predominantly of Dominican tobacco, with an Ecuadorian habano wrapper covering a Dominican binder and a filler full of Dominican tobacco.

The subject of today’s review is the Brindis vitola, a double perfecto measuring 7 x 55 that retails for $16.50 each. Long-time fans of La Flor Dominicana may think that the combination of vitola, size and extremely unique cap look very familiar and they would be correct: the new cigar vitola is almost an exact copy of the company’s TCFKA “M” Collector releases, albeit with a different wrapper design.

All three sizes of the regular production release started shipping to retailers on Sept. 27, 2019 packaged in boxes of 10: 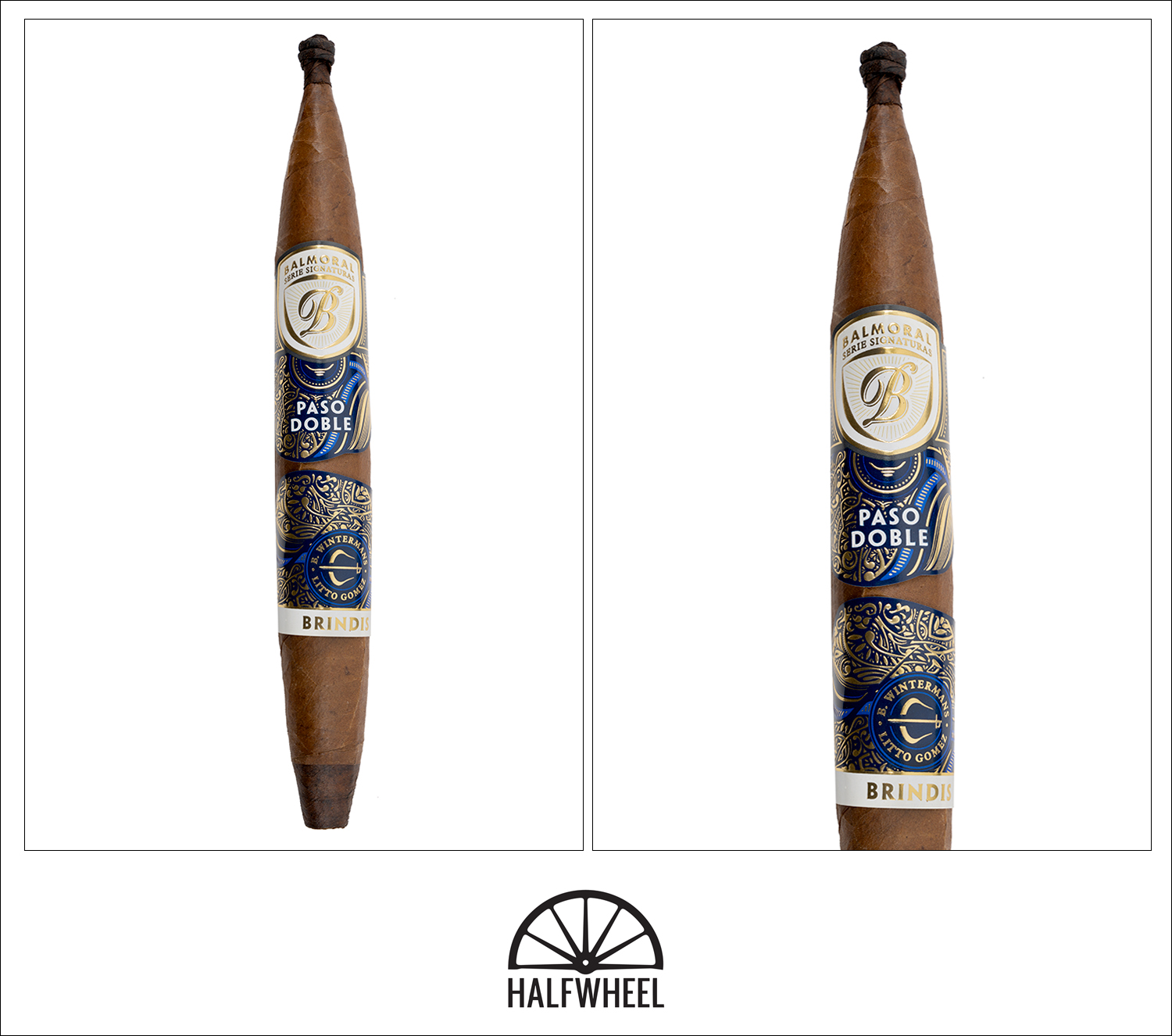 Look up “visually distinctive” in the dictionary, and you will have a photo of the Balmoral Serie Signaturas Paso Doble Brindis: the perfecto vitola is obvious enough as it is, but add in the unique pigtail cap—which must have taken a long time to do for each cigar—and the combination of a large, ornate main band and slightly smaller secondary band, and you are left with a cigar that almost literally jumps off of the shelf. The wrapper used on the main part of the cigar—i.e. anywhere that is not the foot or the cap—is a milk chocolate brown color, smooth to the touch and plenty of oil. The aroma from the wrapper and foot is a combination of a strong brewed lemon tea, espresso beans, baker’s spices, earth, almonds and cedar, while the cold draw brings flavors of peanut shells, citrus, gritty earth, leather, hay, cedar and milk chocolate sweetness.

From the first puff, the Paso Doble Brindis features a very distinct sourdough bread note that dominates the profile, followed by notes of bitter espresso, creamy nuts, hay, cedar, leather and a touch of earth. There is also plenty of spice on my tongue and black pepper on the retrohale, the latter of which easily overwhelms the somewhat generic vanilla sweetness that is also there at times. Construction-wise, the draw is excellent with an amazing amount of resistance after a slightly lower than normal straight cut, while the burn is giving me no major issues so far. The smoke production is quite a bit above average, while the overall strength level increases slowly from mild to a point halfway between mild and medium by the end of the first third.

Thankfully, both the spice and the black pepper on the retrohale fade quite a bit by the time the second third of the Balmoral begins, which in turn allows the vanilla sweetness to become more prevalent in the profile. In addition, the dominant flavor shifts from sourdough bread to a combination of citrus and earth, although notes of toast, leather, cocoa nibs, popcorn and a small amount of cinnamon are not far behind. Both the burn and the draw continue to impress, while the smoke production coming off of the foot remains both dense and copious. Strength-wise, the Brindis increases enough to hit the medium mark, but does not seem to want to go much higher as the second third comes to a close. The final third of the Serie Signaturas Paso Doble Brindis seems to be close to a carbon copy of the second third, with a profile that continues to be dominated by the same citrus and earth combination. However, while the spice has failed to return in any significant way, the black pepper on the retrohale becomes more aggressive, leading the vanilla sweetness to once again take a back seat to the detriment of both the complexity and the balance. There are other flavors in the profile, including hay, creamy cedar, cinnamon, bitter espresso, dark chocolate, nuts and bread, but none of them come close to threatening to take over the top spot. While the draw continues to give me great resistance on every puff, the burn moves off course just enough that I am forced to touch it up a couple of times. Finally, the overall strength level increases just enough to pass the medium range, and that is where it is by the time I put the nub down with a  little more than an inch remaining. While it may look similar to a La Flor Dominicana you have seen in the past, the Balmoral Serie Signaturas Paso Doble Brindis tastes almost nothing like a release from La Flor Dominicana. The profile includes too much sourdough bread and citrus flavors for that, but it is also not quite as balanced nor quite as complex as the best La Flor has to offer. Having said that, the overall construction was extremely good, and the slightly higher than medium strength was very well-integrated. In the end, anyone looking for a La Flor Dominicana clone is going to have a bad time, but those trying the Balmoral Serie Signaturas Paso Doble Brindis with an open mind will not be disappointed.