The winter holidays are full of traditions, blending familial, religious, secular and community rituals and events together to create a period of weeks more steeped with them than seemingly any other time of the year.

Of course, the retail world is part of that and as a subset the cigar industry takes part by releasing certain cigars only during the final weeks of the year. In the case of La Flor Dominicana, the company has joined in by way of a cigar currently known by the acronym TCFKA “M,” a release that this past year received its fourth installment.

The name has changed from the first time the cigar appeared in 2013, when it was known as the Mysterioso, an offshoot of the company’s Mysterio cigar that debuted in 2007. The original Mysterio was a similarly shaped perfecto that featured a foot and cap of contrasting colored tobacco, with the natural version getting an oscuro top and bottom and the oscuro version getting the inverse.

But in 2013, La Flor Dominicana decided to take the line a step further with the Mysterioso Collector’s Edition, adding a decorative layer of Ecuadorian Connecticut tobacco to the Connecticut broadleaf oscuro wrapper, while also upping the price to $19 per cigar or $95 for the five-count box.

The following summer however, the cigar would be forced to undergo a name change as Connecticut Valley Tobacconist, a retail operation in Enfield, Conn. and parent company of the Old Battleground line of cigars, filed suit that August in U.S. District Court claiming that LFD had committed trademark infringement, since Connecticut Valley Tobacconist has been using the Mysterioso name since January 2003 for a line of cigars. The store filed for registration of the mark on Aug. 11, 2006 with the United States Patent & Trademark Office, and on July 10, 2007 the mark was officially registered. You can read the full details here, but CVT claimed that because of LFD’s size and stature in the industry, reverse confusion was likely to occur at retail and amongst consumers. 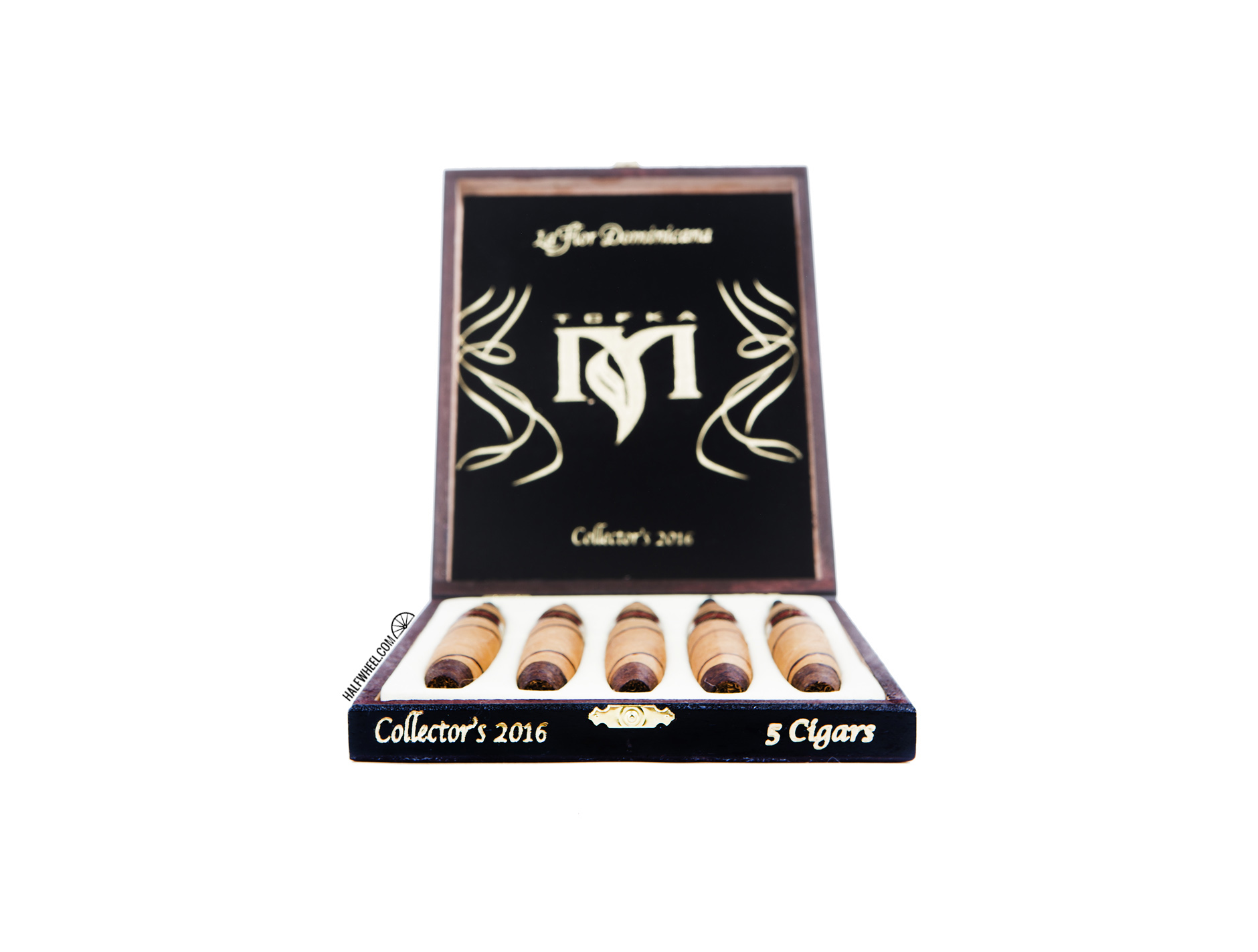 So in 2014, La Flor Dominicana announced that it would be bringing the line back but with a new name, TCFKA “M,” or The Cigar Formerly Known as Mysterioso. It made its third appearance in 2015 and the fourth installment rolled out the first week of December 2016. Visually, the 2016 edition bears a good amount of resemblance to the 2014 version, which used an Ecuadorian Connecticut shade wrapper with broadleaf accents and five different Dominican and Nicaraguan fillers, though this year’s version uses an Ecuadorian Sumatra wrapper with oscuro accents. The La Flor Dominicana TCFKA “M” Collector’s Edition 2016 is certainly a thing of beauty, almost inspiring pause and a bit of guilt for wanting to set fire to it. Underneath the near-perfect decorations is a firm core of tobacco, uniform from head to foot, capped by a golden tanned wrapper that shows some small veins and offers an aroma of lightly buttered popcorn. The foot is expectedly more complex, with a dried fruit sweetness that suggests mangos in one sample, plums in another and yet sweet butter in the third. There is also the faintest bit of steak sauce or Worcestershire, with almost no pepper or spice present. Given the tapered and decorated head, I’m not exactly sure where is the best place to cut the cigar, and preferring to err on the too little side I cut fairly far up and leave a small opening for the air to get through. Not shockingly, the cold draw is a touch tight but not worrisome, and surprisingly tame; again there is no pepper or spice detectable, but only a slightly sweet undertone that ranges from dried mango slices to a flavor that reminds me of the leftover milk from a bowl of Cheerios.

The TCFKA “M” starts off with a toasty profile complemented by a bit of pepper and sweetness in the nose, a medium-minus strength profile out of the gate but still offering a good bit of flavor. The pepper takes gradual steps forward, making the aroma and retrohales  incrementally stronger, and by the time the burn line crosses the oscuro covered foot, it is definitely back in familiar LFD territory for strength, but with a lightness in the body that gets pointed out by notes of popcorn and very thin chalk that almost treads into mint. It’s not long after that point that the ash breaks off with surprising fragility and the draw opens up a touch, with a new creaminess coming into the flavor that gently coats the tongue while the pepper gets much more aggressive in the nose, resulting in a back-and-forth between the senses that is quite captivating. Retrohales veer in two different directions shortly after based on the sample; if touches of orange zest come in, they focus the sharp sensation that’s been in the nose even more; or if a bubblegum sweetness comes in it softens the pepper a touch. On the palate, the creaminess fades and the flavor thins out quite a bit, retuning to plain popcorn or a Neapolitan pizza dough. After such a busy start, the TCKFA “M” 2016 seems to slow down and regroup as it heads into its second third as the burn has been fantastic and smoke production sufficient. I must say that there is a bit of a lull just during the transition to the second third, though it’s not long before the TCFKA “M”  finds itself dabbling in notes of flan, albeit going very easy on the caramel, while the pepper begins to return first in the nose and then on the tongue. The salt-and-pepper ash continues to build beautifully until the point where my fear takes over and I tap it off, all while the cigar settles into a medium-plus profile approaching the midpoint led by black pepper and a slightly more rocky profile, though it does make glances at black coffee and can’t fully shake the light yet enveloping texture of the smoke. The pepper tacks on another small helping at the transition to the final third while the smoke warms up a bit,  adding a good bit of punch to the still somewhat thin texture, while a bit of dried apple sweetness joins in the aroma. The resting aroma and retrohales can also pick up notes of baking pretzels, almost evolving right in front of the olfactory nerves. 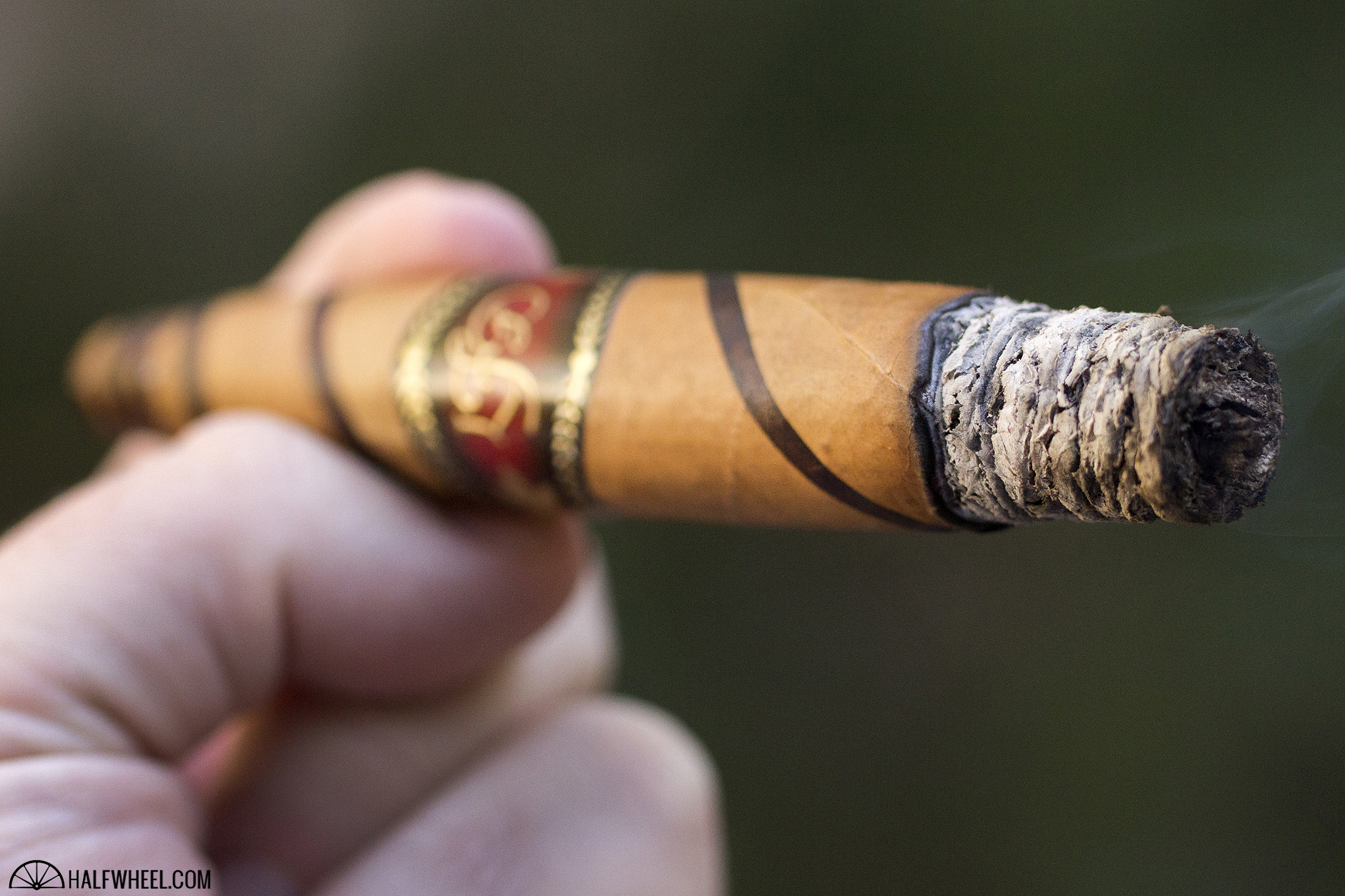 While La Flor Dominicana is known for having a good bit of flavor gravitas in many of its cigars, the TCFKA “M” 2016 edition hasn’t shown much of it until now, as the smoke has finally nudged into slightly thicker territory, the pepper is getting more robust and retrohales are getting quite a bit fuller. There can be the occasional twinge of sourness and minerals, but for the most part the cigar stays on the rails of its fairly new path, although it does stop short from really venturing into full-bodied or full-strength territory. There are fleeting notes of unsweetened corn flakes that keep things light in contrast to the ever-present pepper, while the rock note from earlier has taken on a slightly damp character. The cigar begins to show a bit of a chalk note in the final third while the pepper continues to permeate the flavor and aroma, but the smoke never gets overly hot or biting and makes it easy to smoke down to a small nub. While the La Flor Dominicana TCFKA "M" Collector's Edition 2016 may at first glance look like a bit of a novelty with the added decoration, I can say that the cigar is nothing but quality and ready for smoking, as much as it might pain one to set fire to something so well crafted. The flavors set a fairly solid baseline, and the better samples take things a step or two further in terms of flavor, balance and complexity, while the burn and technical aspects are nearly flawless, as long as you keep an eye on the ash after it reaches an inch in length. I'm impressed to see a slightly lighter bodied profile from LFD, and while there are points where it gets a bit thin, the flavor and pepper hardly ever take a break, making it a long but thoroughly engaging cigar. Even though the winter holidays are behind us, this is certainly a worthwhile cigar with which treat yourself.