If there is one word that has generated a bit of consternation among the halfwheel staff in recent years, it’s collaboration. In particular, what exactly is the difference between a collaboration and a brand simply having cigars made at a factory that it does not own?

While it may be marketing speak or there is truly some differentiation, the term remains used quite a bit, including on the latest project from Royal Agio Cigars. For its Balmoral brand, the company introduced Serie Signaturas in 2018, which the company says will focus on, you guessed it, collaboration.

The first installment comes from Tabacalera La Alianza S.A. and Ernesto Perez-Carrillo Jr., who worked with Royal Agio’s owner, Boris Wintermans, to create Dueto. The blend features a a Nicaraguan wrapper from Jalapa, a Nicaraguan binder grown in Estelí, and a mixture of Nicaraguan tobacco and Agio’s signature Brazilian mata norte fillers. It is offered in five vitolas, all packed in 10-count boxes:

“I am honored to have had the opportunity to work alongside Ernesto on this very special collaboration project for Balmoral,” said Boris Wintermans, ceo of Royal Agio, in a press release. “I want to push the boundaries of what can be discovered in premium cigar blending, and it is this desire that inspired the creation of the Balmoral Serie Signaturas (Signature Series) and initial conversations with Ernesto. This collaboration platform offers another avenue for us to explore, discover and release completely new and exciting cigar blends. The resulting blend for DUETO, behind Ernesto’s blending genius, makes this first release nothing short of exceptional.” 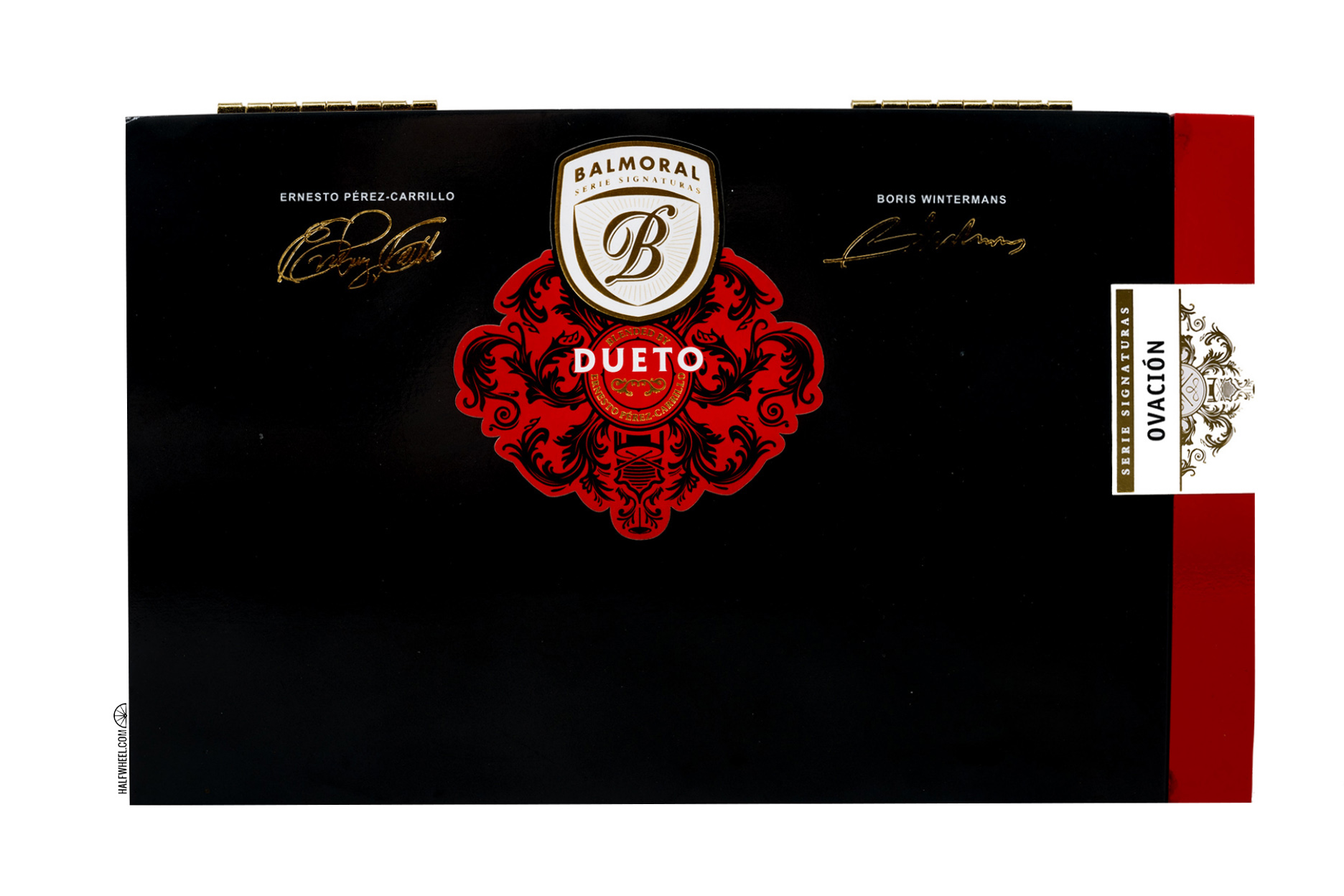 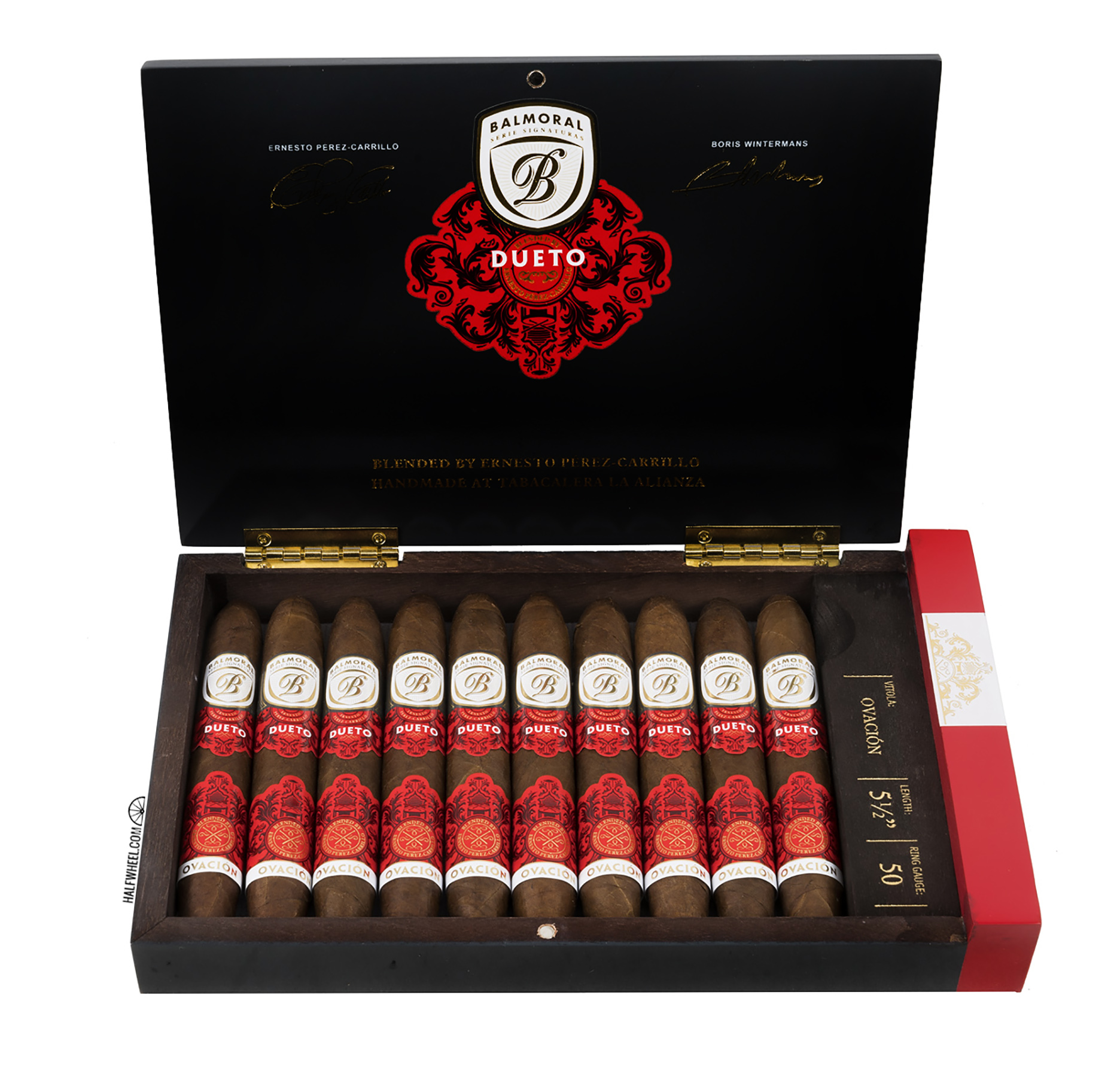 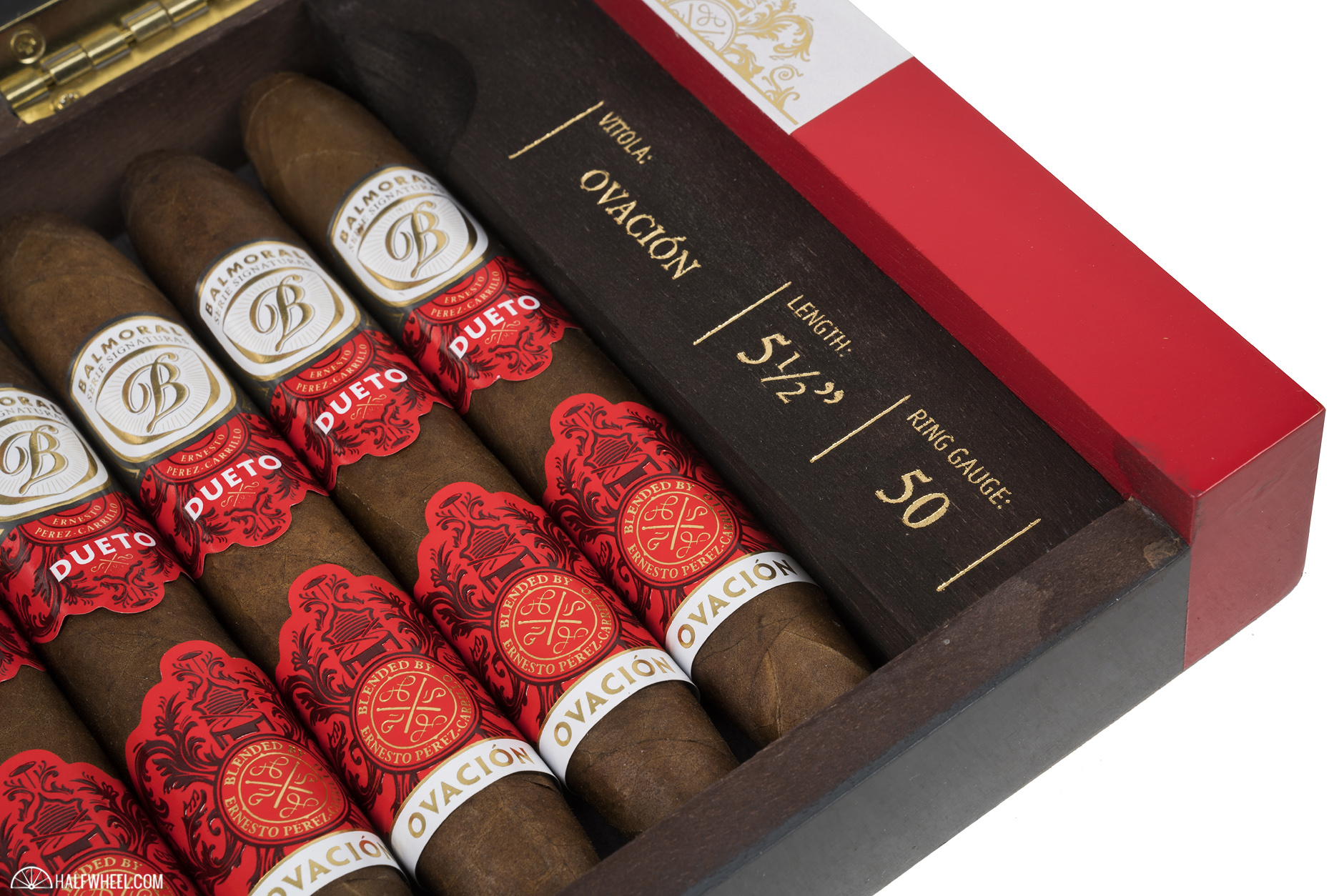 While the line was slated to begin shipping in September, that got pushed to October, the final of the five new lines that Royal Agio debuted at the 2018 IPCPR Convention & Trade Show. However, there was more to come regarding this release.

In November, Guantanamera Cigar Co. has filed a lawsuit over the cigar’s name, claiming that Royal Agio’s application for a trademark for Dueto is in conflict with the Guantanemra’s trademark for the word Duo, which was registered in August 2009. Additionally, the lawsuit goes onto claim that Royal Agio opted to use the name specifically because of the trademark issue. It cites an interview given by Wintermans to Cigar Snob (29:00), where Wintermans said “And the Dueto is for, well, a duo.” The litigation remains pending. 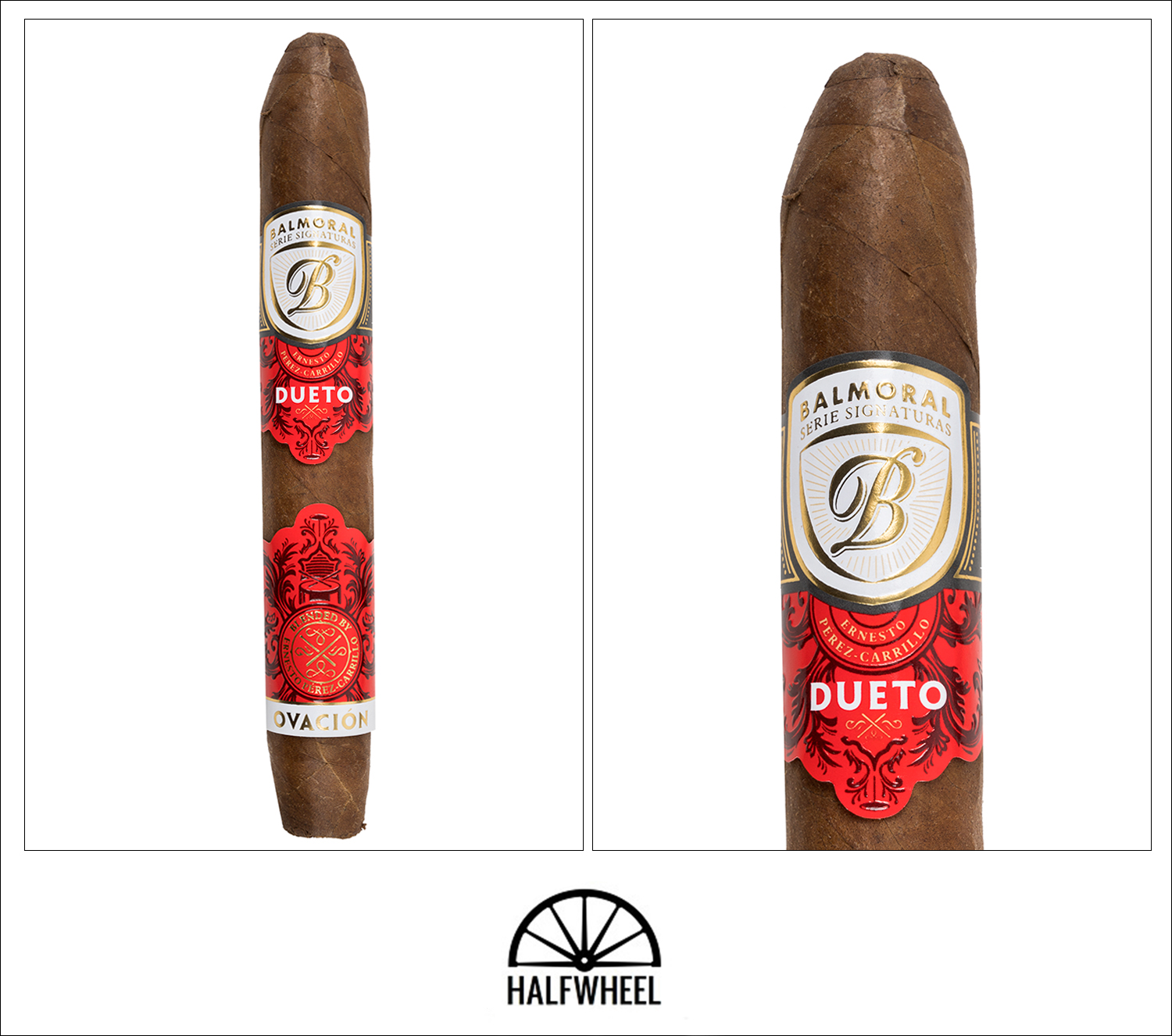 The first I think about when I see the Balmoral Serie Signaturas Dueto Ovación is all the curves that the cigar has, so much so that I thought it was a short and very slightly tapered salomones when I first looked at it. The head is rounded, the foot tapers before being abruptly chopped off, and the bands are loaded with rounded edges, in particular as they point at the middle of the cigar. The cigar is rolled rather firmly except towards the foot, where it can be unexpectedly soft, leading to an over squeeze of the first sample. The head of the first sample is also a bit on the softer side, though not as pronounced amongst the three samples. The wrapper has a bit of mottling and very small veins, as well as more fragrance than I generally expect to find, almost a bit of perfumed cedar. The foot, meanwhile, offers a much more mellow aroma of plain peanuts that is almost non-existent in certain samples, with one offering a very fleeting cotton candy sweetness. Air moves smoothly on the cold draw with a slightly buttery texture and taste, with minimal sweetness or pepper.

The Balmoral Serie Signaturas Dueto Ovación gets going with a fairly mild profile, with a bit of plain peanuts right of the gate before picking up some white pepper. There’s a touch of sourness in one sample that moves me towards more retrohales, and the experience of the smoke through the nose is very good across all three samples. It’s a smooth and mellow with just a touch of pepper that gives a quick zing on the finish, with one of the three cigars stepping up the vibrancy to what could be described as a wake-up call. The flavor stays on the mellow side, though does challenge the senses to figure out what all is being offered. There are puffs that make me think of graham crackers at first but quickly shed sweetness in place of mild pepper. What does start to emerge is a slightly dry profile that a bit of white pepper and chalky earth, though without any sourness. After the first clump of ash drops, the cigar becomes a good bit creamier, with retrohales and the aroma offering just a slight tingle of white pepper. Each of the samples burn quite well, including getting around the curve of the foot, with plenty of smoke being produced. 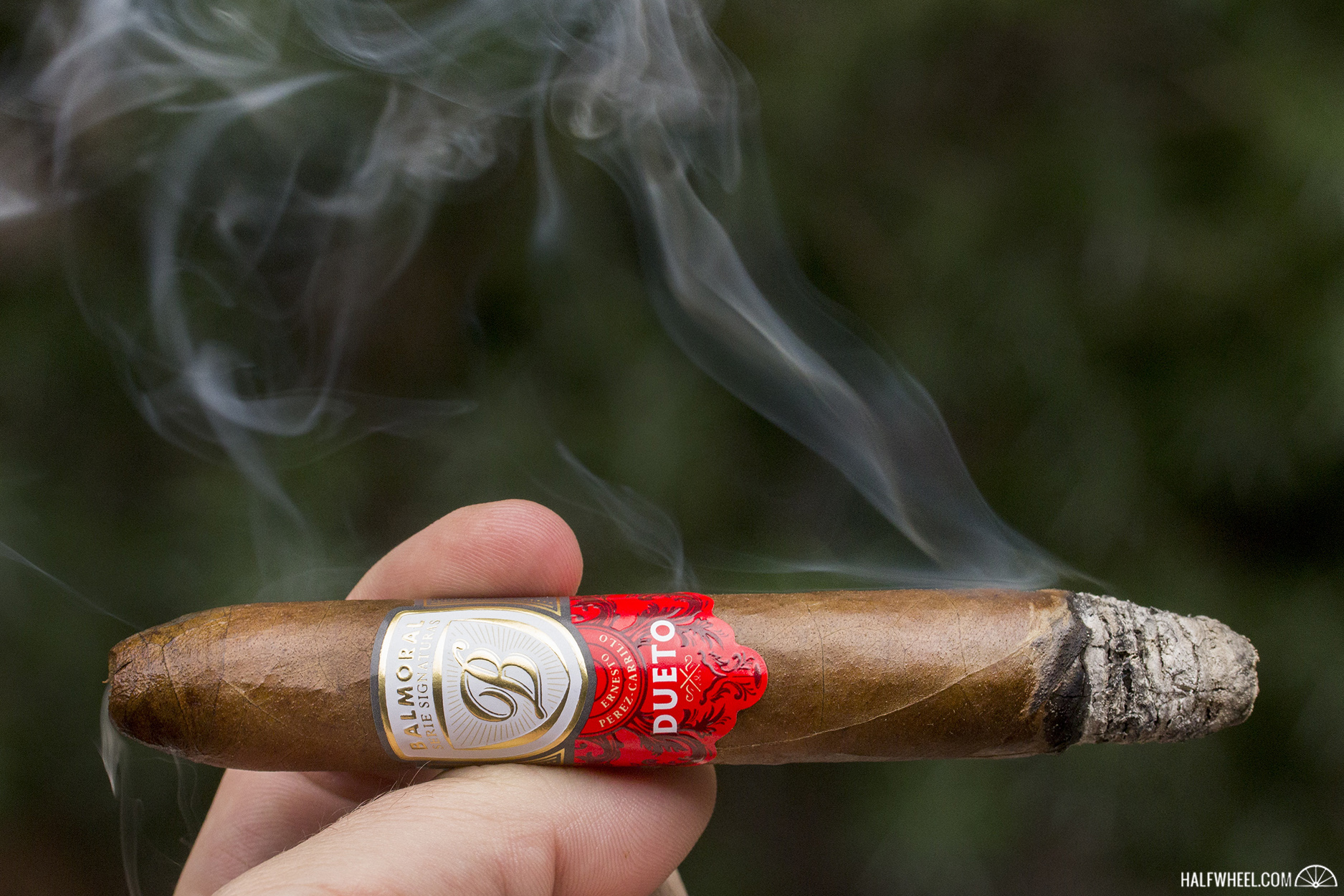 The second third of the Balmoral Serie Signaturas Dueto Ovación is a bit more pepper-forward, though a retrohale is needed to get the most of out of the still fairly tame sensation. There’s also still a bit of creaminess though it varies from sample to sample, but when it’s there the cigar is all the better for it, as it provides good mouthfeel and some roundness to the smoke. Crossing the midway point, there’s a bit more pepper through the nose, with the cigar remaining in mild-plus territory but becoming more vibrant every couple of puffs. By the time the second third is close to being complete, the pepper is a much more significant part of the profile, so much so that the retrohales are hardly anything like they were at the start of this portion, let alone the first third, nudging the profile into a punchy medium-minus. Each of the three samples continues to burn quite well. 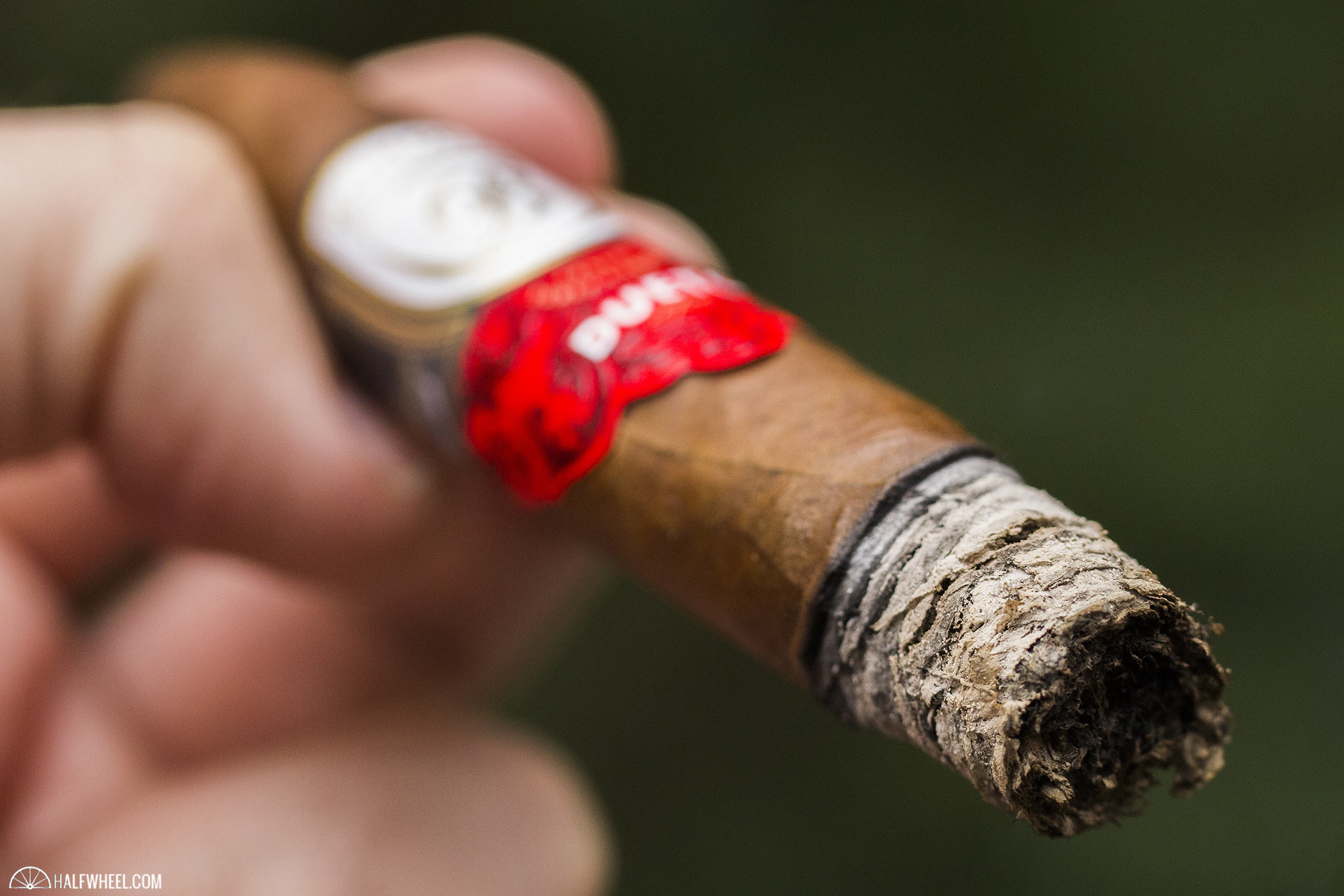 The pepper continues to build throughout the first puffs of the final third, and now the palate is getting an amount that is almost equivalent to what had to be found through retrohales. Behind that is a bit of plain bagel with a very slight toastiness, with an increasing contribution from a profile of mixed nuts, minus saltiness. Pepper finally levels off with about two inches left, though in doing so pivots to become sharper on the back of the tongue and into the back of the throat. At its fullest, I find the Balmoral Serie Signaturas Dueto Ovación to barely claw into medium strength and body territory, despite the pepper and increasingly toasty flavor doing their darnedest to work the tongue. The technical performance has been exceptional from start to finish, with an easy draw, even burn line and plenty of smoke production. Not too long ago, Charlie Minato reviewed the Taíno from Serino Cigar Co. and described it as a cigar that didn’t seem to be well-suited to our scoring system, a line that I wasn’t quite sure made sense at the time, but after smoking the Balmoral Serie Signaturas Dueto Ovación, I’m inclined to feel that the same analysis applies to this cigar. There are some spots where the cigar is quite good, and delivers the somewhat rare combination of bright white pepper and a very subdued flavor profile. Yet there are a number of puffs that I felt were lacking the flavor depth and complexity that helps cigars climb up our scorecard. The result is a score that likely doesn’t reward the cigar enough for what it does offer—a very palate-friendly profile with a bit of pepper and great retrohales, along with fantastic construction and technical performance.