If celebrating cigar brand anniversaries is your thing, 2018 has certainly been a good year for you, and Davidoff of Geneva USA has been a source of many of the festivities.

Not only is the company celebrating the 50th anniversary of its eponymous Davidoff line, it is also celebrating the 30th anniversary of the AVO line, which was founded by Avo Uvezian. As the story goes, after celebrating the christening of his daughter Karen in 1983 with a Cuban cigar he found to be subpar and not worthy of the price, he pursued the idea of making his own. After searching the Dominican Republic for a suitable factory, he met Hendrik “Henke” Kelner and began production on the cigars, which debuted in 1988. In 1995, the rights to distribute the cigars were acquired by Davidoff, and they have been part of that company’s portfolio ever since.

As one of the releases this year, the company dug into the history books for some of its most acclaimed limited editions, rereleasing them in limited numbers. One of those cigars was the AVO 22, released in 22 in two versions—one for the U.S. and one for Europe. Both celebrated some milestone events involving the number 22: Uvezian was born on March 22, his sister was also born on a 22nd, and he arrived in the U.S. on a 22nd. 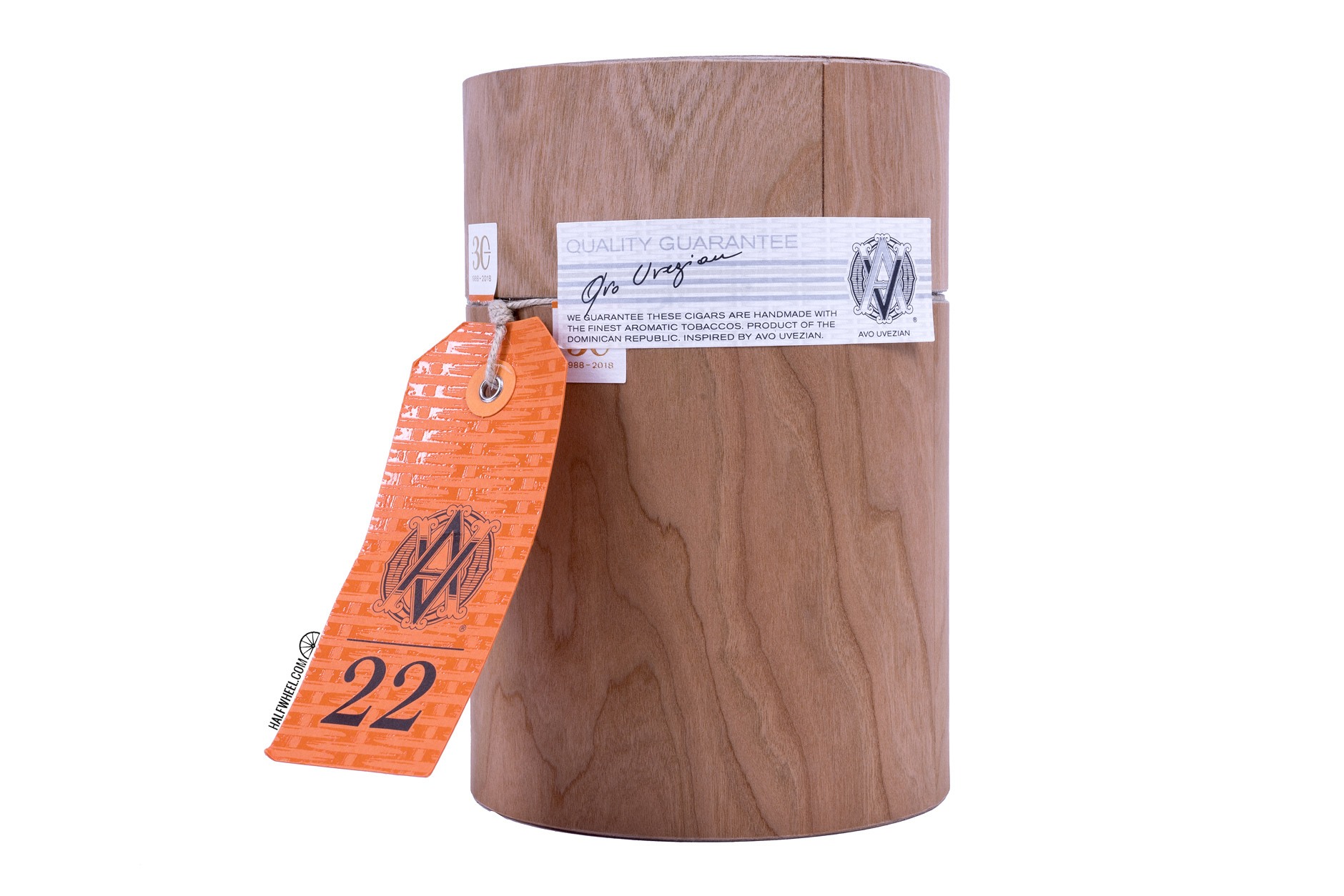 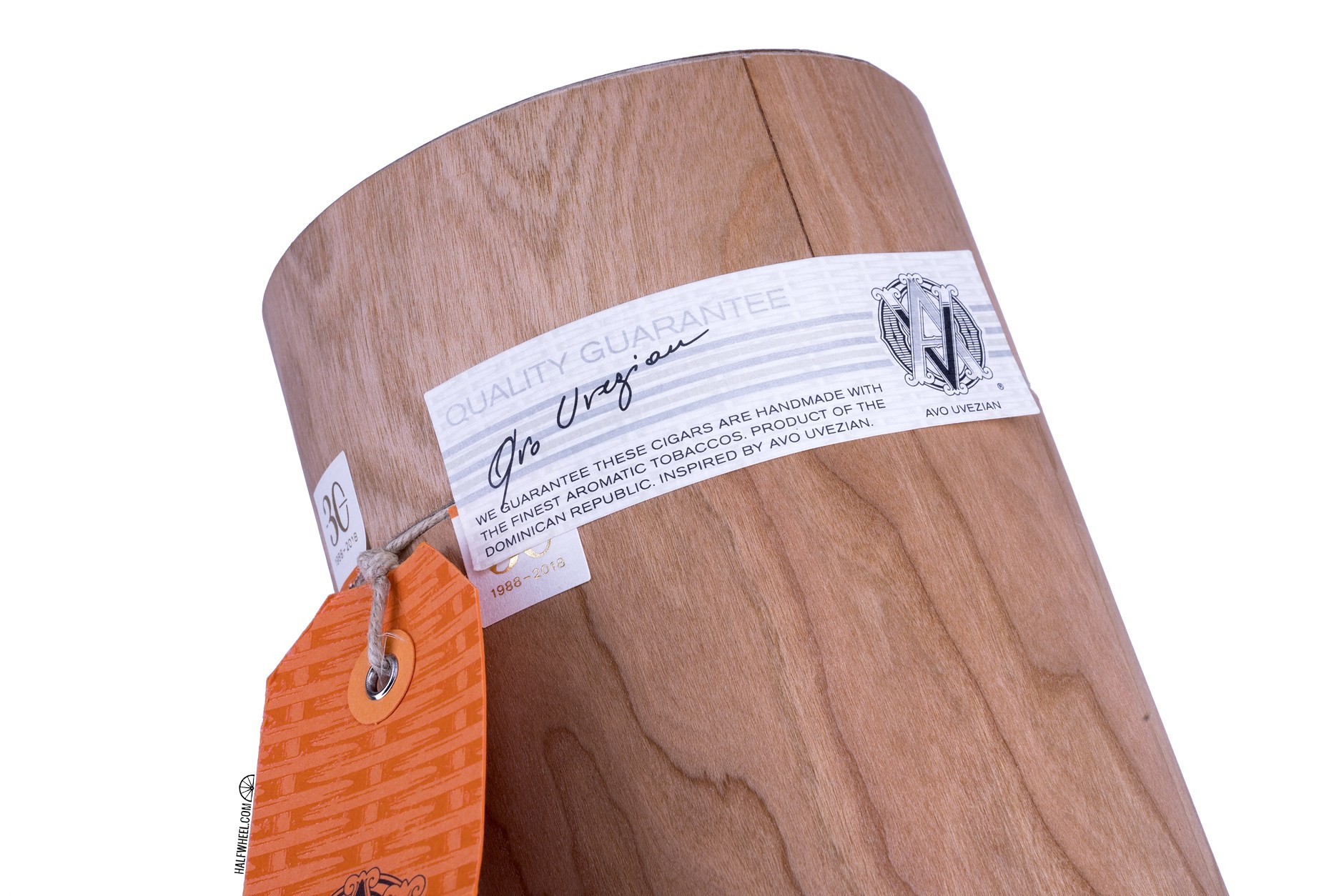 Staying true to the original, the re-released version uses an Ecuadorian sun grown wrapper over a Dominican binder and four different Dominican fillers. Additionally, the packaging gets a bit of an update: the cigars still come packed vertically in canisters of 19, but they now have bands, in this case, the traditional AVO band and a secondary 30 year band, both in a mix of cream, orange, silver and gold. 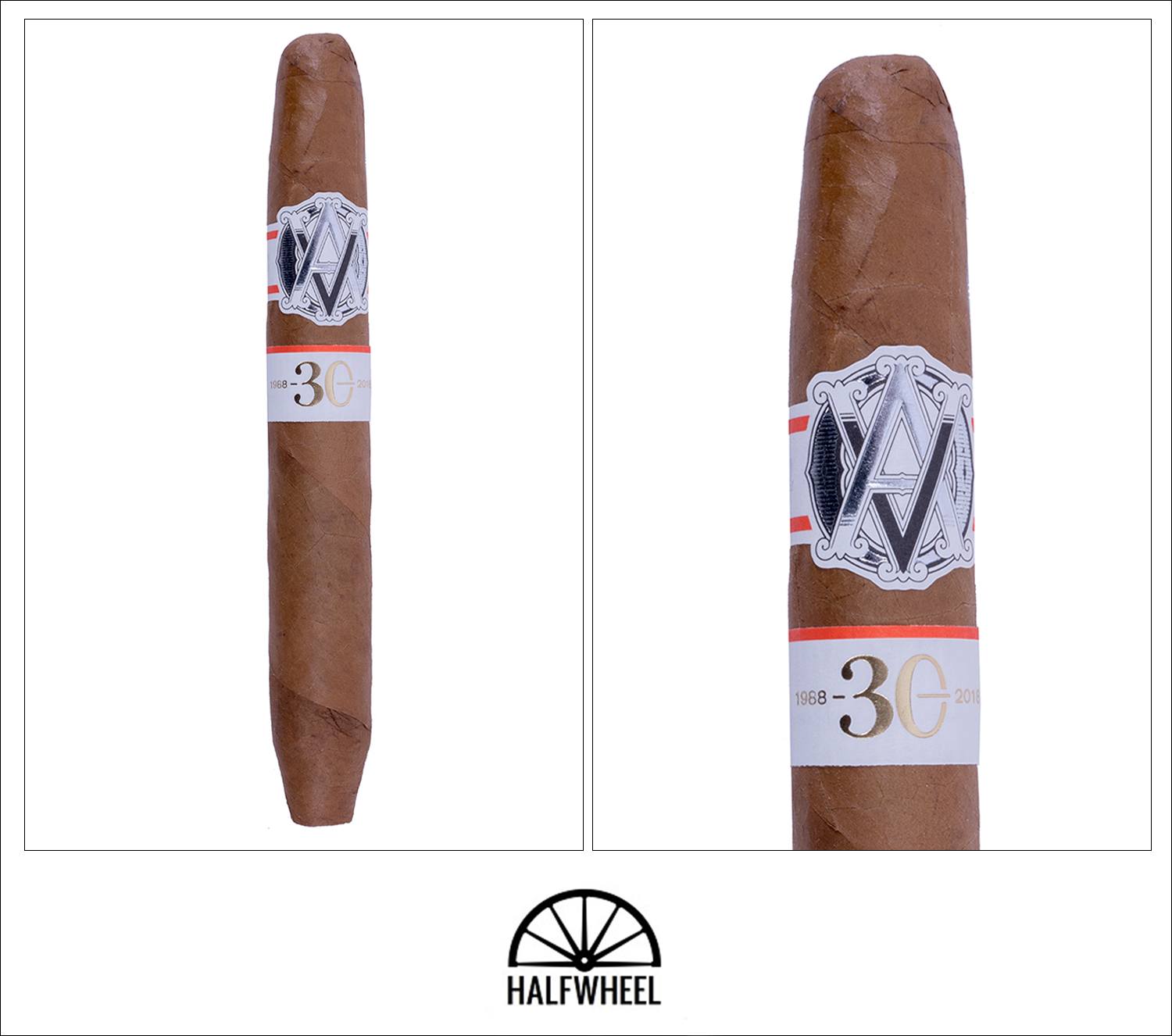 The AVO 22 30 Years certainly commands some visual attention; the perfecto shape, gorgeously tanned wrapper, and bright white bands do all they can to work together in a siren song. It’s a firmly rolled cigar but far from being outright hard; there is some give to be found but considering the thin wrapper I don’t want to chance things. If there’s one spot where the AVO doesn’t look quite perfect it’s the head, or more specifically how the tobacco covers the head. The samples provide a range of visuals: one is just right and blends in quite well, the next isn’t sloppy but it stands out for how it drapes and blends, while the third drapes a bit awkwardly and seems to have a small vein present. The wrapper itself is generally quite appealing if a bit vein-laden in some samples, but the color is nearly impeccable. The foot of the cigar and the wrapper itself are both quite mild, suggesting just a bit of light bread, cake donut or cereal, when suggesting anything at all. The cold draw is a bit tight on the first sample, better on the second and smooth and easy on the third. Flavors are equally as mild here but skew more towards plain popcorn, with some condensed milk sweetness and white bread undertones.

The initial puffs of the AVO 22 30 Years are much fuller than the prelight aroma or cold draw would have suggested, checking in at a hearty medium with a bit of pepper on both the palate and in the nose nudging that up. Through the first inch the cigar layers on a bit of toast, a bit of Dominican terroir and some dry earth to enhance the complexity while not making it a stronger offering. There’s a bit of cream that comes in past the one-inch mark as the ash continues to hold on, with the burn line even, the draw smooth and the smoke production sufficient. 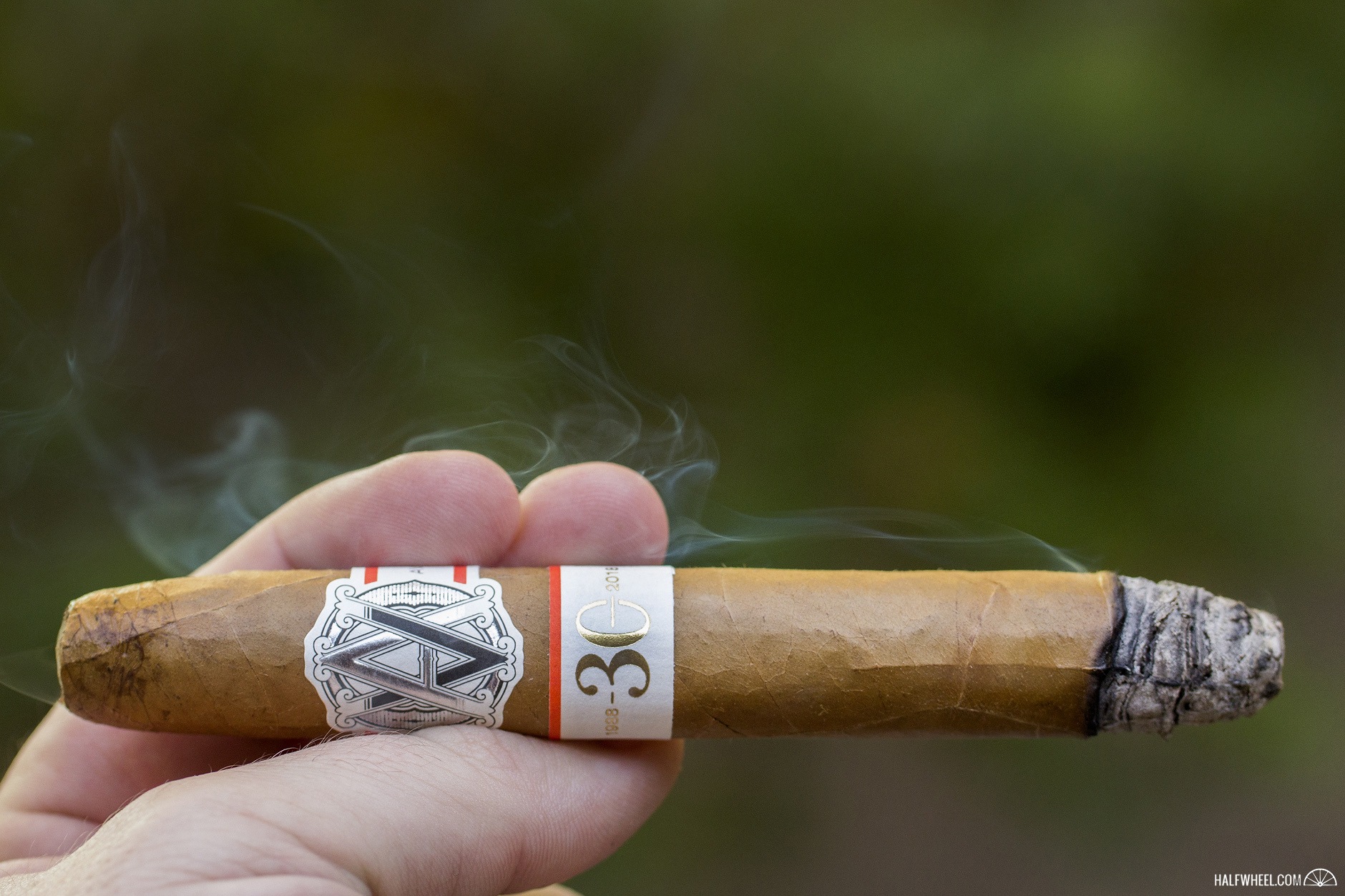 While I can’t say it with complete resolve, there seems to be a bit more pepper coming through as the AVO 22 30 Years enters its second third, and it’s noticeable on both retrohales and regular puffs. Approaching the halfway mark the cigar gets a bit more pepper, and it’s a bit sharper than previous iterations, which nudges the profile to a more focused point as opposed to being a blend of other flavors so far. There is also some of the condensed milk sweetness returning, which adds a thick if subtle sweetness to the base notes and seems to envelop the other flavors quite well. The retrohale picks up just a bit of light roast coffee as the burn line heads into the final third, with the technical performance remaining quite good. 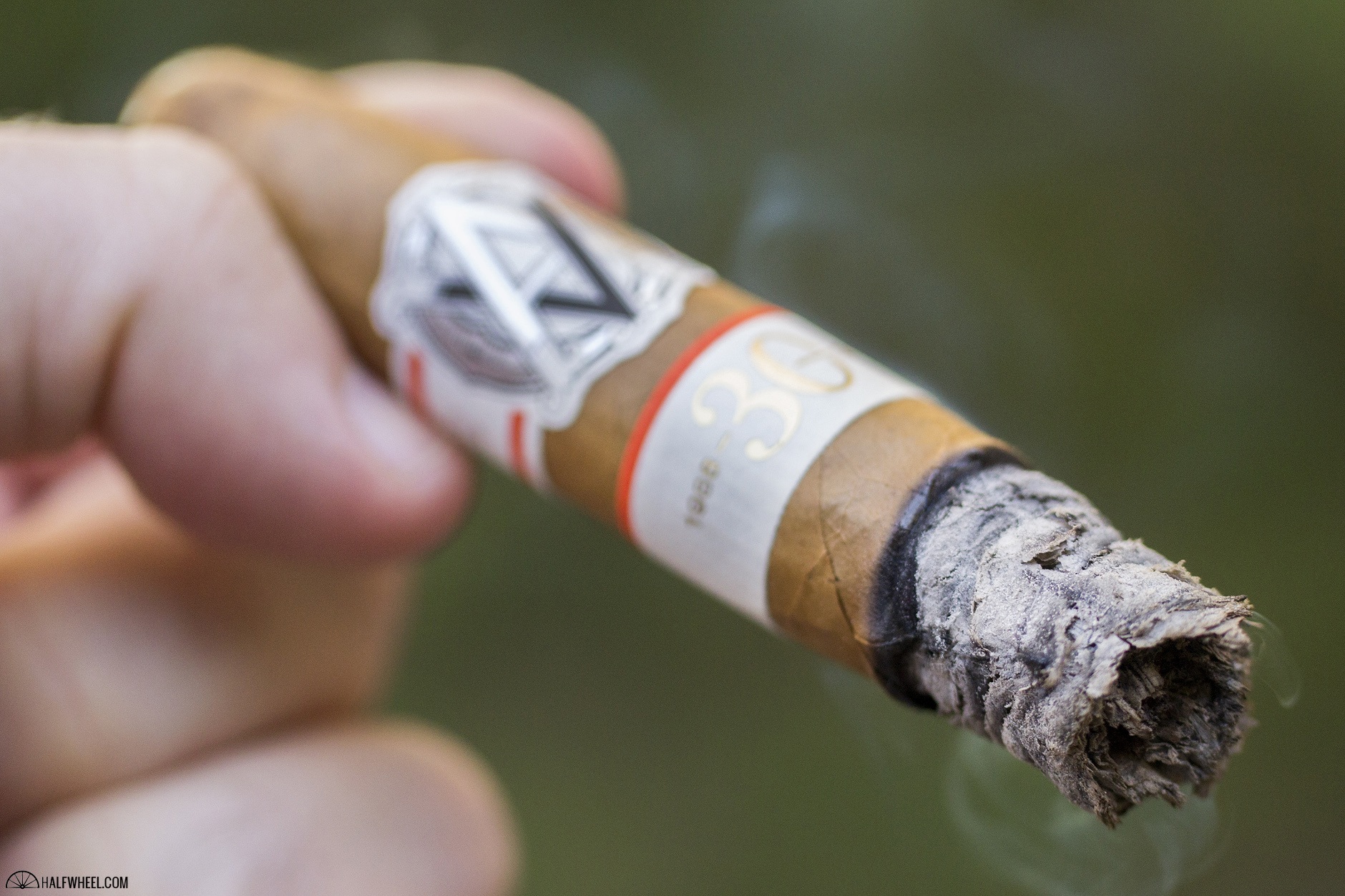 Building on the increased and focused pepper that I found near the midpoint, the AVO 22 30 Years grows just a touch stronger, and now offers some genuine strength as opposed to a more superficial level of stimulation from the pepper. That building sensation lasts only until the bands come off, as the cigar begins to turn just a bit harsh, with the third sample particularly grating on the palate as contrasted to the other two. The AVO 22 30 Years gets a bit sharp and hot in the final inch, neither of which is a major surprise, but instead just a clear signal it’s time to put the cigar down. 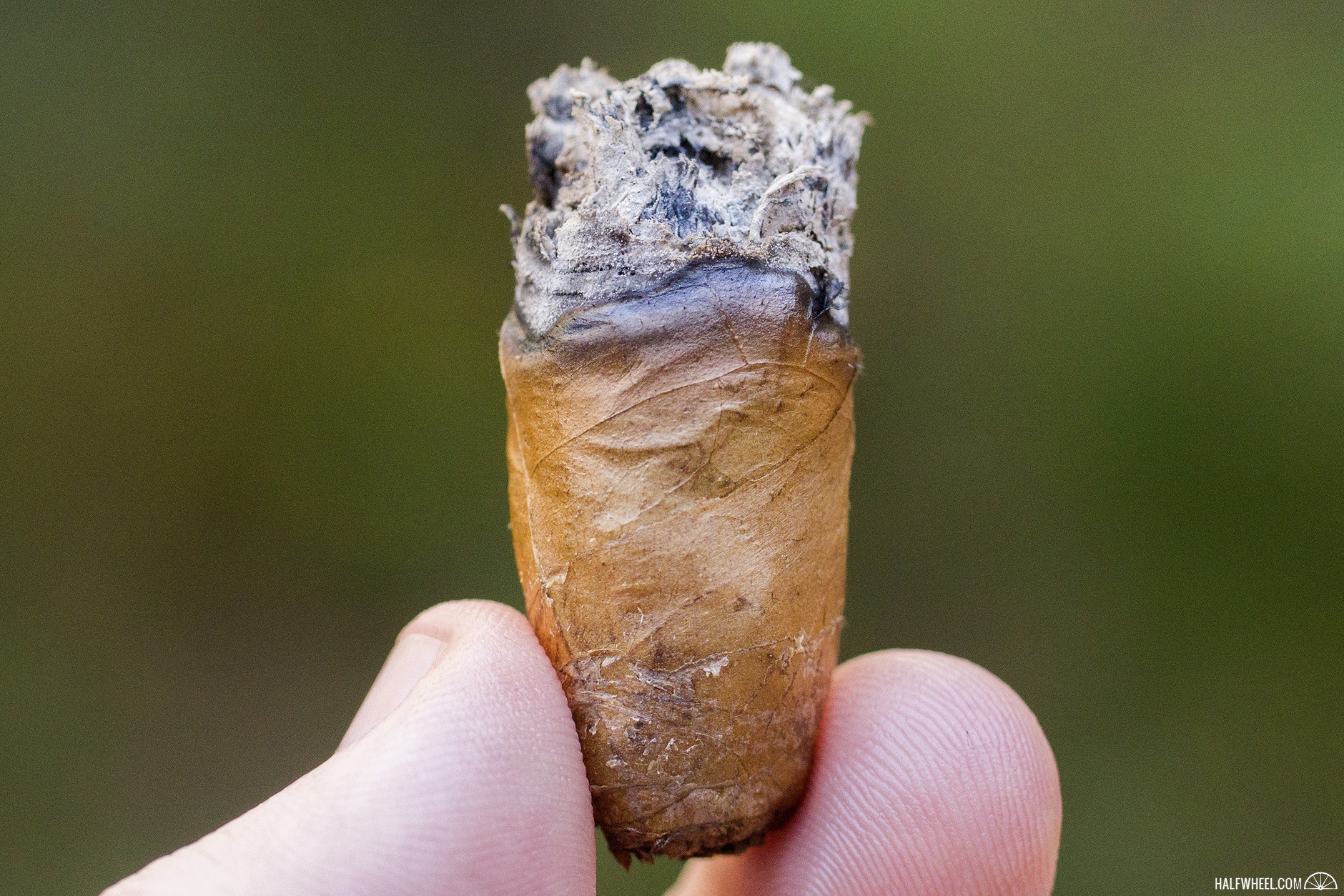 They say you can never go home again, and I think the same thing generally applies to cigars as well. There have been numerous re-releases, and for as good as they may be, they always seem to fall just a bit short than the built-up memories of the original. In the case of the AVO 22 30 Years, I can't say I have a vivid memory of what the original tasted like, and as I've said before, it would be unfair to compare one to these head-to-head given the differences in age. That said, the AVO 22 30 Years is a remarkably good cigar that pays more than due homage to the original and the man who created the brand, and is one that certainly merits at least a try, if not some space in your humidor.