There have been many different versions of a box-pressed cigar and this year has seen a couple notable additions. The first came in the form of the Quesada Salomon Press which has now been released in both the Q40 and Oktoberfest lines and the other came in the form of Alec Bradley’s Nica Puro Diamond Rough-Cut.

As the name implies, the shape of the cigar is made to mimic a diamond, or in more mathematical terms—a rhombus. Rather than having edges that would allow you to lie the cigar flat with the band sticking at some form of a 90 or 180 degree angle, one of the four angles is in the center of the band itself. In addition, the angles of the edges of the cigar are not equal, or even close to equal, meaning that turning the cigar to the side will not produce a normal mouth feel. 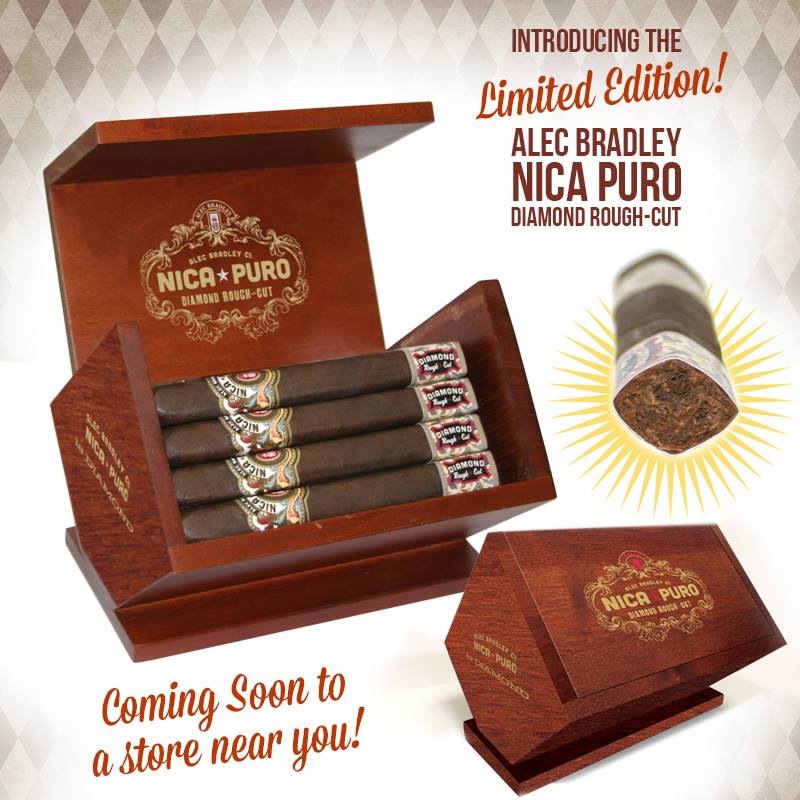 Blend-wise, it’s got an additional half leaf over the typical Nica Puro blend, which as the name implies is a Nicaraguan puro. The Diamond Rough-Cut is made in a single 6 1/4 x 54 vitola with production limited to 3,000 boxes of 16. 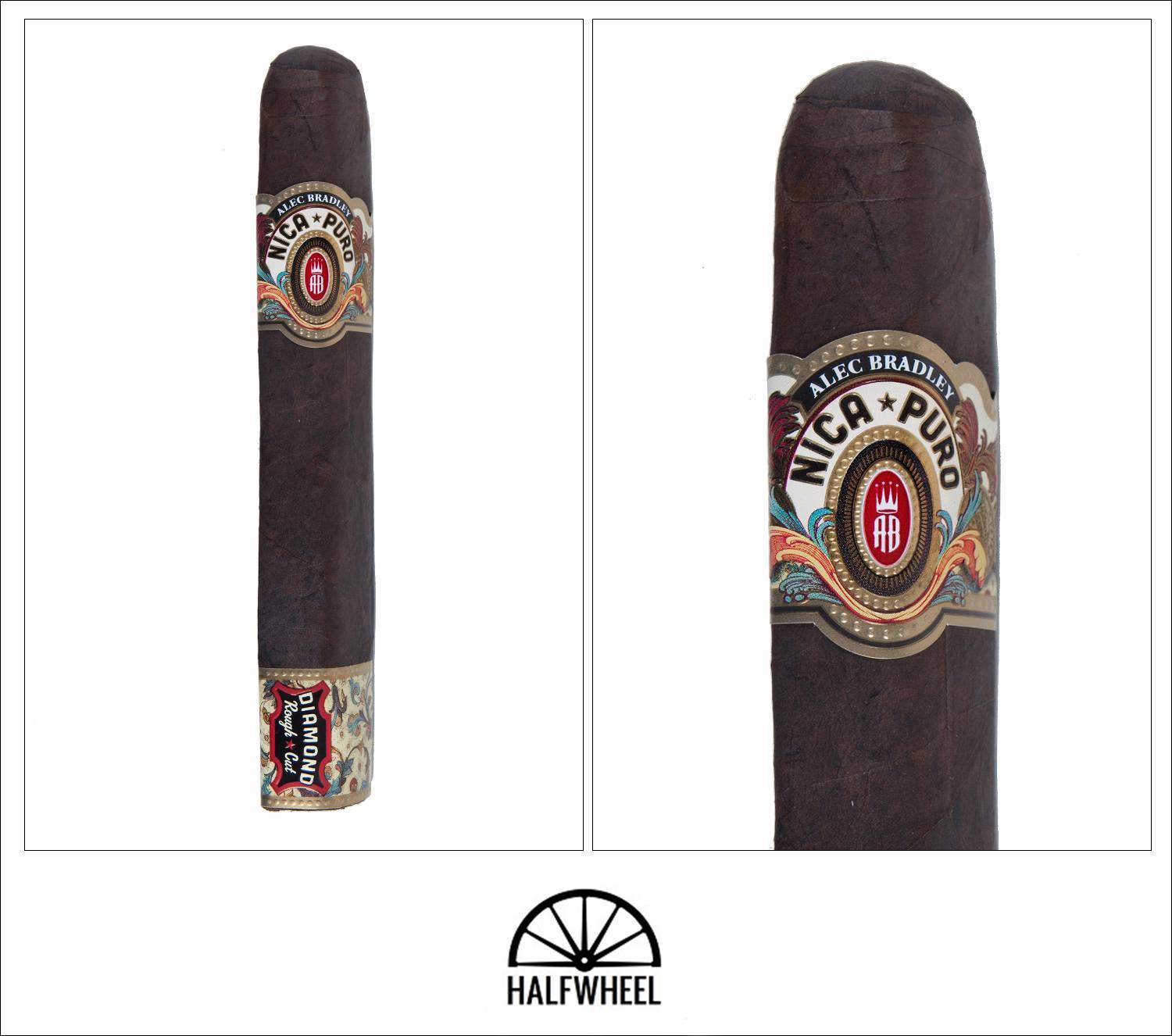 While it’s fairly challenging to accentuate the exact nature of the cigar in the straight-on pictures that we normally photograph for reviews, when in your hand—the uniqueness of the Diamond Rough-Cut is abundantly clear. The wrapper itself is fairly smooth to the touch, although the edges are extremely well defined. Aroma from the Nicaraguan wrapper is made up of a lot of leather, a bit of cocoa, damp earth and a red wine and oak combination that reminds me of spent barrels. From the foot, I pick up a Reese’s Peanut Butter Cup-like note and a contrasting manure note. The cold draw of the Alec Bradley shows a sweet cocoa, kiwi and some charred meats.

Upon lighting, the draw of the Diamond Rough-Cut becomes super tight, something I didn’t notice on any of the cold draws. Flavor-wise, there’s some leather, charred earth, red pepper and a bit of a toasty black pepper. Underneath all that is some acidity and saltiness that don’t seem particularly attached to any note specifically. As the first third continues, the Diamond Rough-Cut shows lots of kiwi over toastiness, some paprika, a creamy cedar and touch of sunflower seed in the mouth. While the burn goes awry, I avoid touching it up and it eventually corrects itself. 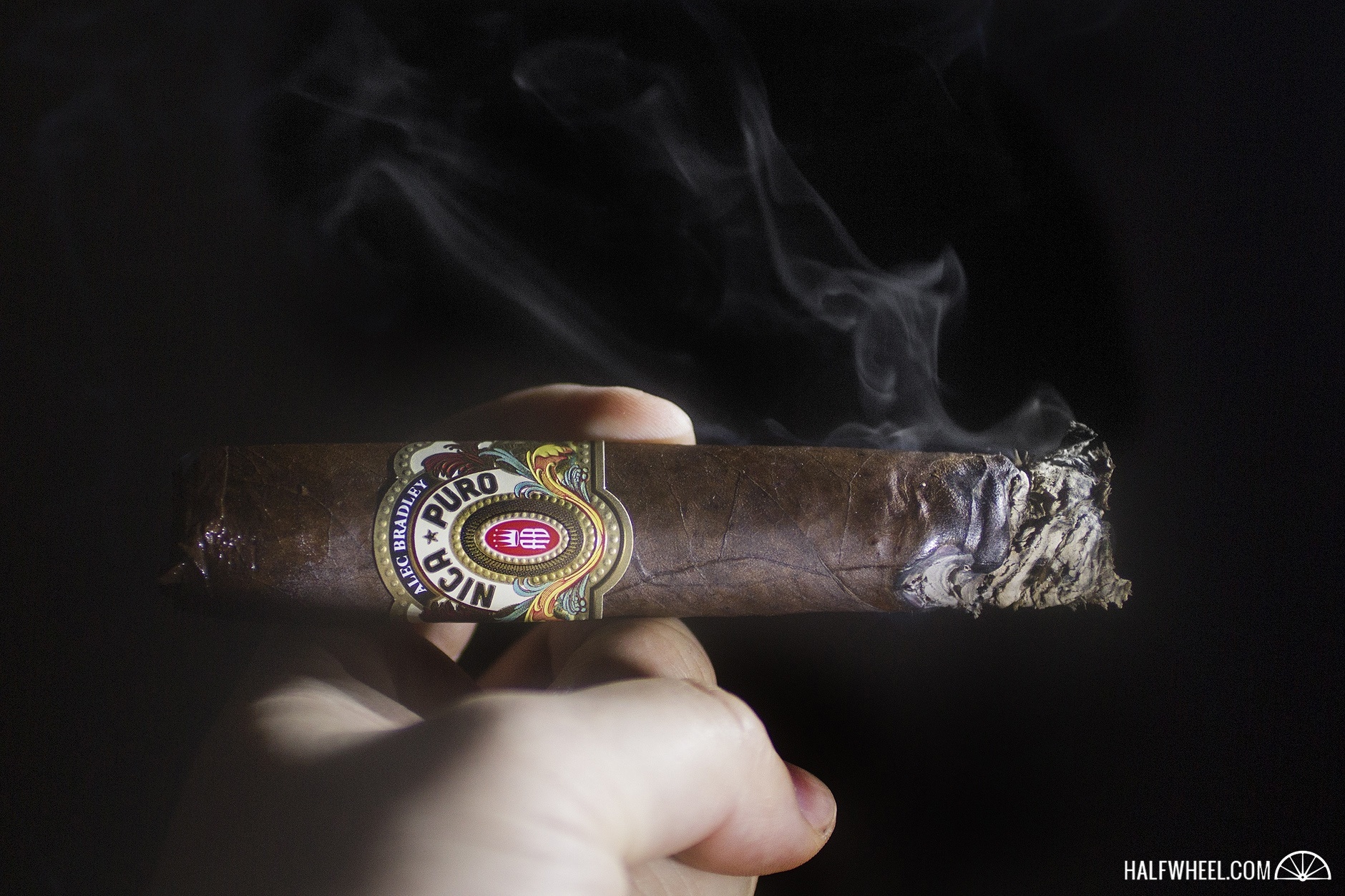 There’s a few brief minutes of harshness in the second third before a root beer note covers the palate. It’s more of an A&W-like note, with creaminess, as opposed to the sassafras found in many other cigars. After a few more minutes it disappears, only to settle as a flavor that comes and goes for about an inch and a half. The kiwi turns charred, but otherwise the core of the flavor profile is relatively similar to the first third of the Diamond Rough-Cut. The burn managed to work itself out, but two samples had problematic draws, more on that below. 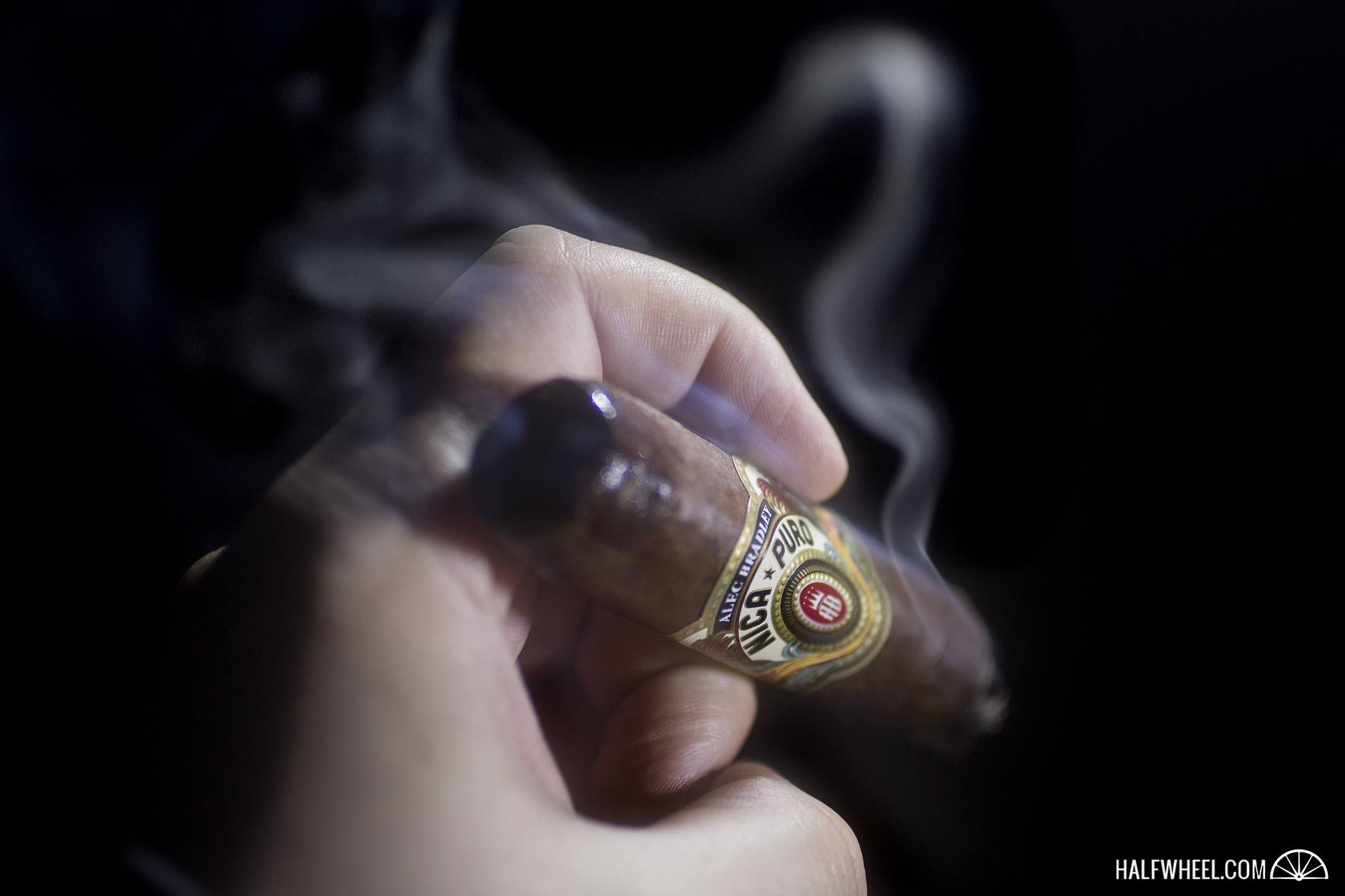 The rise in of the charred flavor continues through the final third with the meatiness becoming dominant on the finish. Slowly, a green licorice note—not full-on anise—begins to work itself into the profile overwhelming the kiwi flavor. Pepper is all but gone, but the sweet and meaty profile is disrupted by the bitterness from the licorice. The burn has its issues and a few touch-ups are needed before I put down the Diamond Rough-Cut. 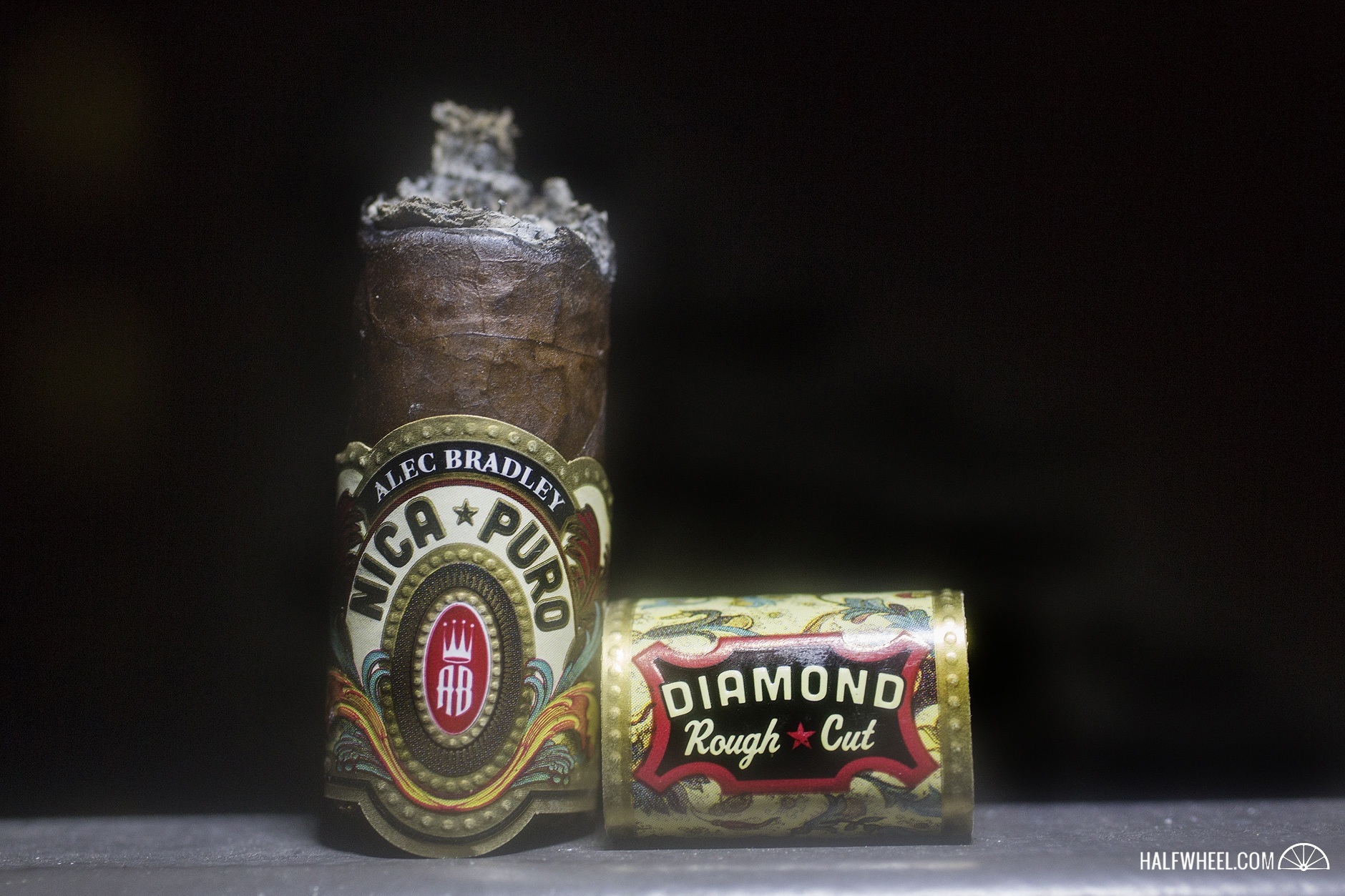 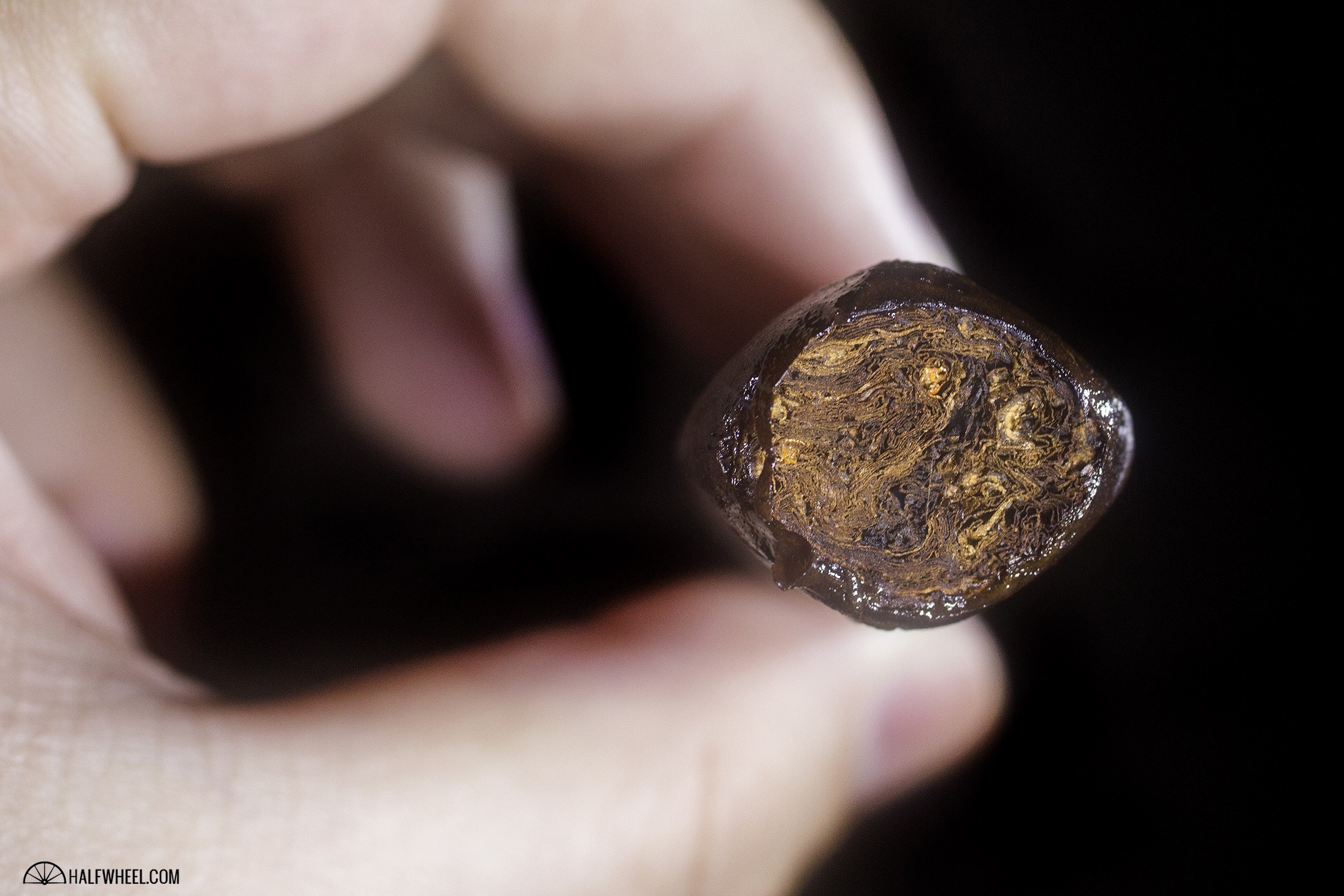 This was the most frustrating cigar I’ve smoked in a long time. Flavor-wise, it was easily the best Alec Bradley I’ve ever had, and quite honestly one of the better cigars I’ve had this year. However, all three samples I smoked were overfilled to the point of detriment. On paper the kiwi and meatiness is not only unique, but also obscure. It worked and worked quite well, but a bit less tobacco would have made this a far more enjoyable experience.