For a period where the most asked question in the cigar industry was what’s new?, the Zino brand has responded with nothing for several years. That was, until this summer, when the brand answered with two new, very expensive cigars.

The Zino Platinum Z-Crown line comes in two sizes, each with its own blend and price tag. The Z-Crown Chubby is the smaller of the two and comes in a familiar size to fans of the brand: a 4 15/16 x 54 perfecto. It uses a Domincan Semilla 253 Yamasa wrapper and an Ecuadorian Connecticut binder, with the fillers coming from a quartet of regions in the Dominican Republic. 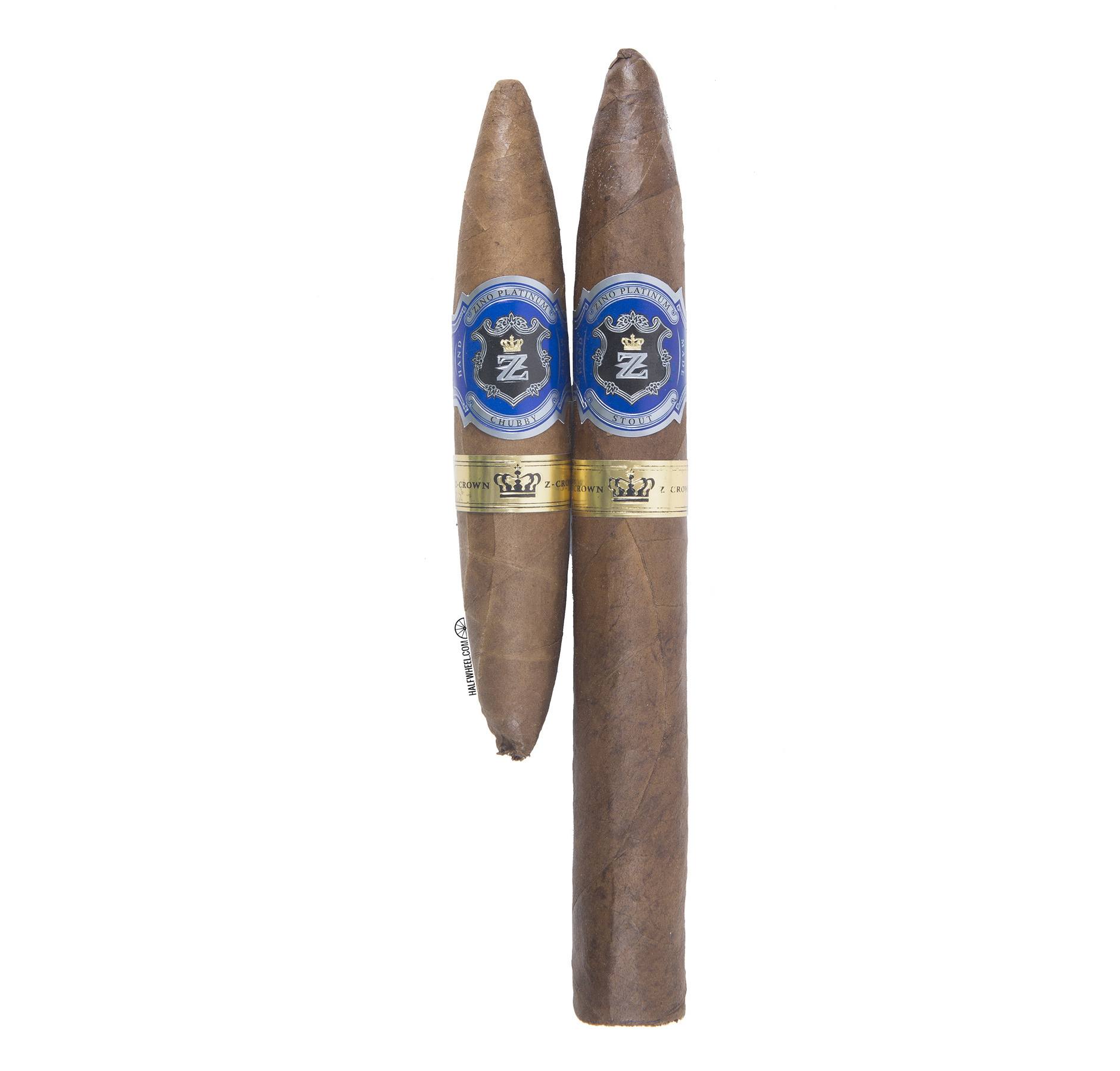 Both come in stunning royal blue 10-count boxes that seem to define the word glossy, with each cigar nestled into its own matching coffin. As for the price, the Chubby comes with an MSRP of $75, while the Stout is priced at $100. It’s not unheard of for the Zino Platinum line to wear sizable price tags, but this was certainly a push into new territory for the brand. 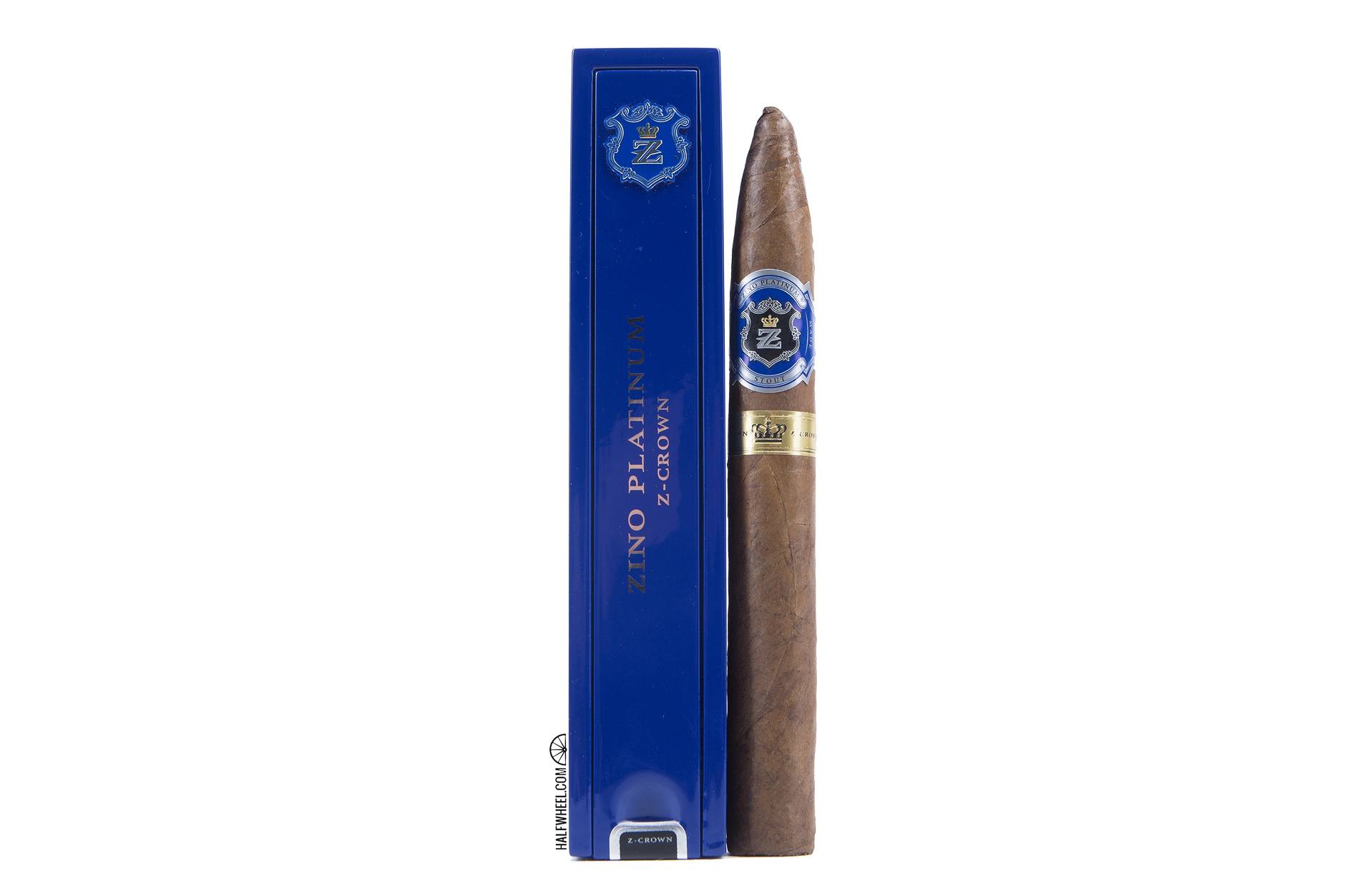 Part of the cost is of course the packaging, but a good chunk of it is the tobacco inside. The filler leaves have been aging for up to eight years, while the cigars themselves sat for four years after being rolled. As the saying goes, time is money, whether its in a pilón, a bale, or on an aging room shelf. The elongated head of the Zino Platinum Z-Crown Stout stretches out the appearance of the cigar, naturally drawing the eye up above the two bands to the head with tobacco stretched and turned, small veins adding motion and more acute visual path. The Z-Crown wears a wrapper with a coffee bean hue that is a bit darker than medium brown, with a bit of mottling and visual texture from some fine veins. The roll is clean with a few soft spots showing up, though for the most part it isn’t concerning. Aroma off the foot is mild at first, suggesting cold Rold Gold pretzels, with a bit of pepper trailing behind, and one sample has a bit of balsamic to it. The cold draws on the first and third samples are a touch open for my liking, and that’s with a conservative clip of the tapered head. It too is quite neutral and cool, with air flow on the second cigar is a bit better calibrated.

Each of the three Zino Platinum Z-Crown Stouts smoked for this review started off on the wrong foot, with a sour, metallic, and chalky first puff that had me questioning just what was being lit up. The pretzel note that was present in the tobacco before being lit hangs around once the foot gets torched and the disappointing start left behind, combining with a bit of creaminess and a very trace amount of table pepper in the first puffs. The first retrohale is much more pepper-forward, though it comes at the expense of a slightly metallic note that is sharp and pointed, hampering its enjoyment potential. Within the first inch, the flavor establishes itself at medium but incrementally building as a heavy, wheat toast flavor picks up, while the body has caught up and is almost in lockstep as the first clump of ash drops. Retrohales get punchier if not necessarily more peppery, while the flavor evolves to pick up a thicker base note that does add some more black pepper alongside damp woods. While there’s no appreciable sweetness in the cigar, I find some very subtle hints at grape and blackberry jam, though they quickly get overshadowed by white pepper and dry woods. The combustion and technical performance of the cigar have both been quite good. The dry woods and pepper carry the Zino Platinum Z-Crown Stout into its second third, holding at medium-plus in body and flavor, while the strength is in the same range but feels to be getting a bit stronger. White pepper continues to tingle and toy with the tongue at times, the most vibrant part of the cigar’s profile latching on to the front half of the tongue well after an exhale. By the midpoint, retrohales are now incredibly pepper-laden, so much so that one taken when the burn line is just below the secondary band results in a cough from the strength. The flavor hasn’t changed much, even with the body of the smoke thinning out at time though still produced in abundance. Moving further into the second third, the retrohales also pick up some heat both in terms of temperature and texture, dabbling with red chili flakes at times though not fully shedding the black pepper core. The flavor stays comfortable in its dry wood position, offering some generic but clean and enjoyable tobacco flavors at times with mixed nuts on rare occasions, though the finish can get off-putting at times as it hangs around on the palate and creeps towards the back of the throat. The draw is quite good and even though the burn line gets wavy, it never requires a touch-up from the lighter. The final third of the Zino Platinum Z-Crown Stout has the cigar staying quite peppery and now sits closer to full-bodied and flavored than medium. A bit of sourness creeps out at certain points; when it does it it’s rather off-putting as you’d expect. When the cigar shows its base notes, they are slightly metallic as the pepper has picked up a rough twinge, and I get a bit of lingering tingle on the sides of the tongue that aren’t inherently bad but certainly don’t seem necessary or beneficial. The cigar has also picked up a good bit of nicotine strength, something I feel more when I stand up then when I’m actually smoking it. While the heat doesn’t affect the flavors too much, it can be felt radiating out from the cigar and onto the fingers, making it a challenge to smoke it down to smoke it down to a nub, which when the flavors cooperate, is something worth doing. I’ve had plenty of cigars that simply did nothing for me, though most of them didn’t come with a three-digit price tag as the Zino Platinum Z-Crown Stout does. This is by no means a bad cigar other than at its very start and at occasional spots where sourness creeps out, yet after three of them I struggle to pick out a single instance where the cigar really captured my attention with its flavor or aroma. An interesting cigar to smoke, but one I doubt I’ll be returning to or recommending unless time makes some significant changes to its flavor.