My Way by Bayron Duarte Gordito

if you’ve been paying attention to one of the fastest growing cigar brands over the last few years, you’re undoubtedly familiar with the Leaf by Oscar, a cigar that started as a store exclusive for “Island” Jim Robnson’s Leaf & Bean Strip in Pittsburgh that quickly grew to be a staple in nearly 2,000 stores across the country.

A good cigar in its own right, the Leaf by Oscar gained fame and notoriety for being wrapped in a tobacco leaf. It’s a cigar that wasn’t afraid to buck the trend of being aesthetically beautiful, at least on first look. It certainly stands out both for its look and how a consumer interacts with it to reveal the actual cigar; instead of simply sliding it out of a cellophane sleeve, the leaf is unrolled to reveal the cigar and give the person about to light it up something unique to hold and examine.

Since the Leaf by Oscar’s debut, the factory behind it, Oscar Valladres Tobacco & Co. has produced a number of other cigars, including The Oscar, a cigar named for the head of the company, Oscar Valladares.

For one of its newest release, the company gave its head blender, Bayron Duarte, the chance to release his own cigar. For his eponymously named project, Duarte decided to do seeming the unthinkable: put the wrapper on backwards. 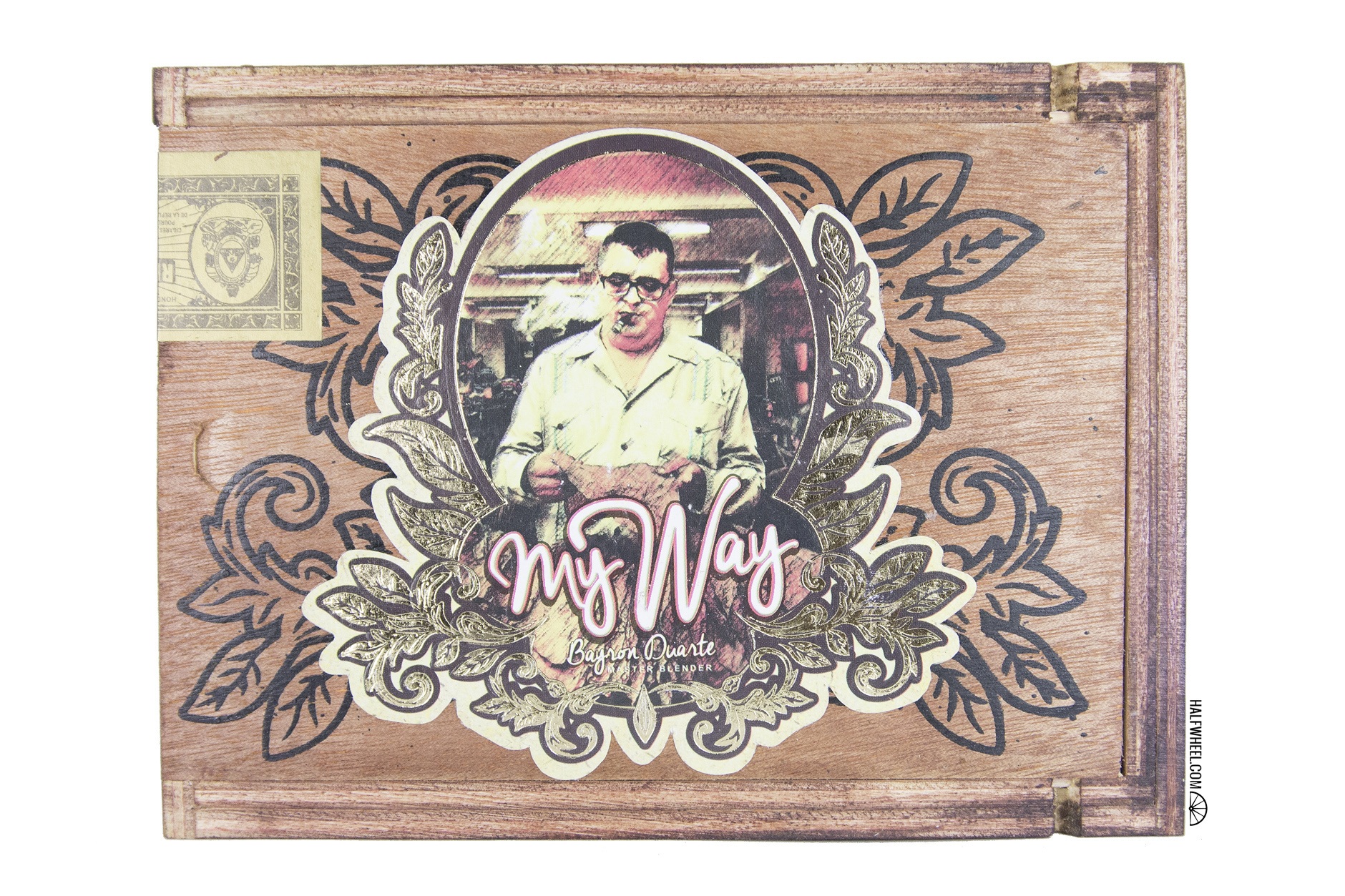 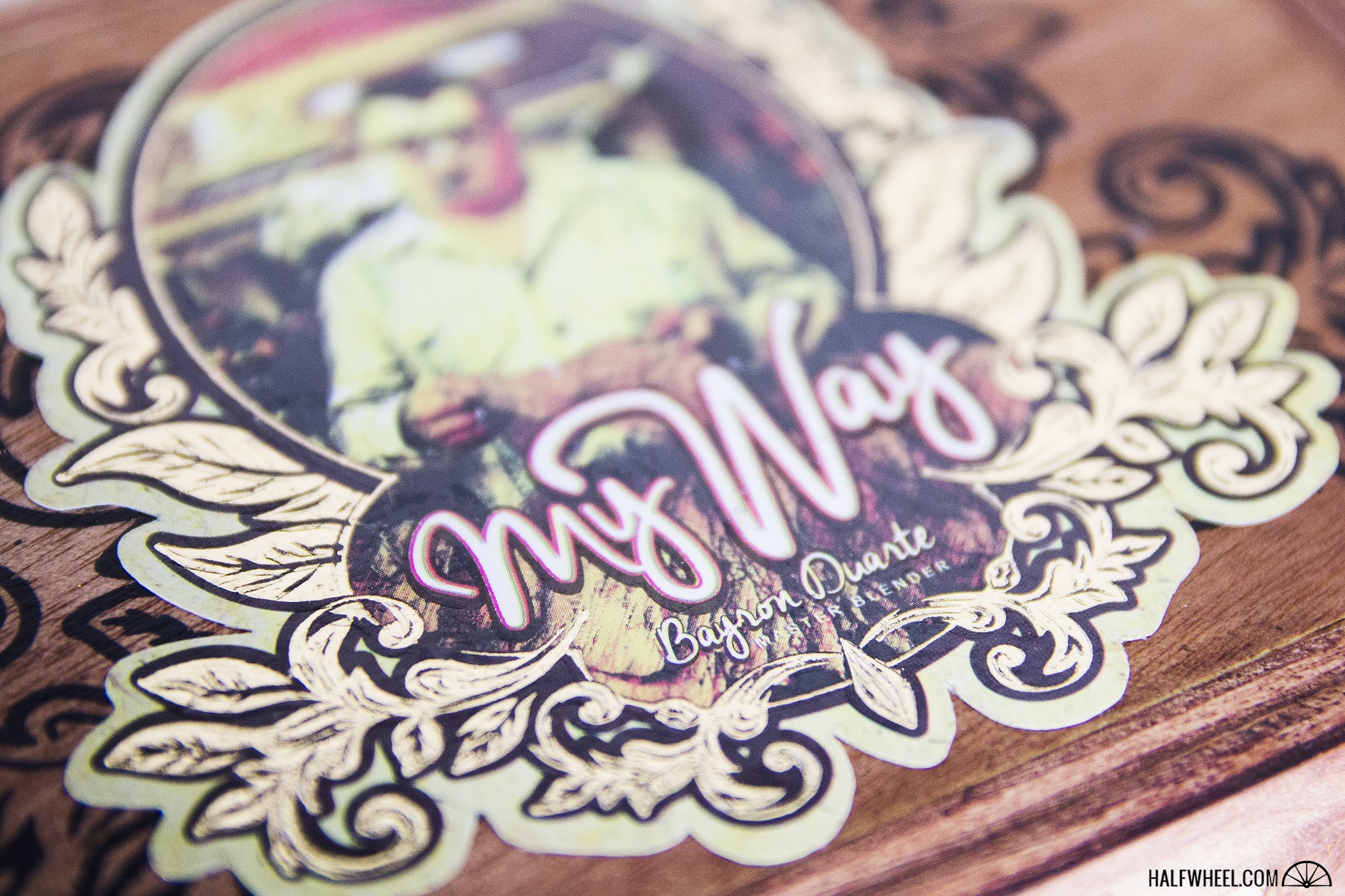 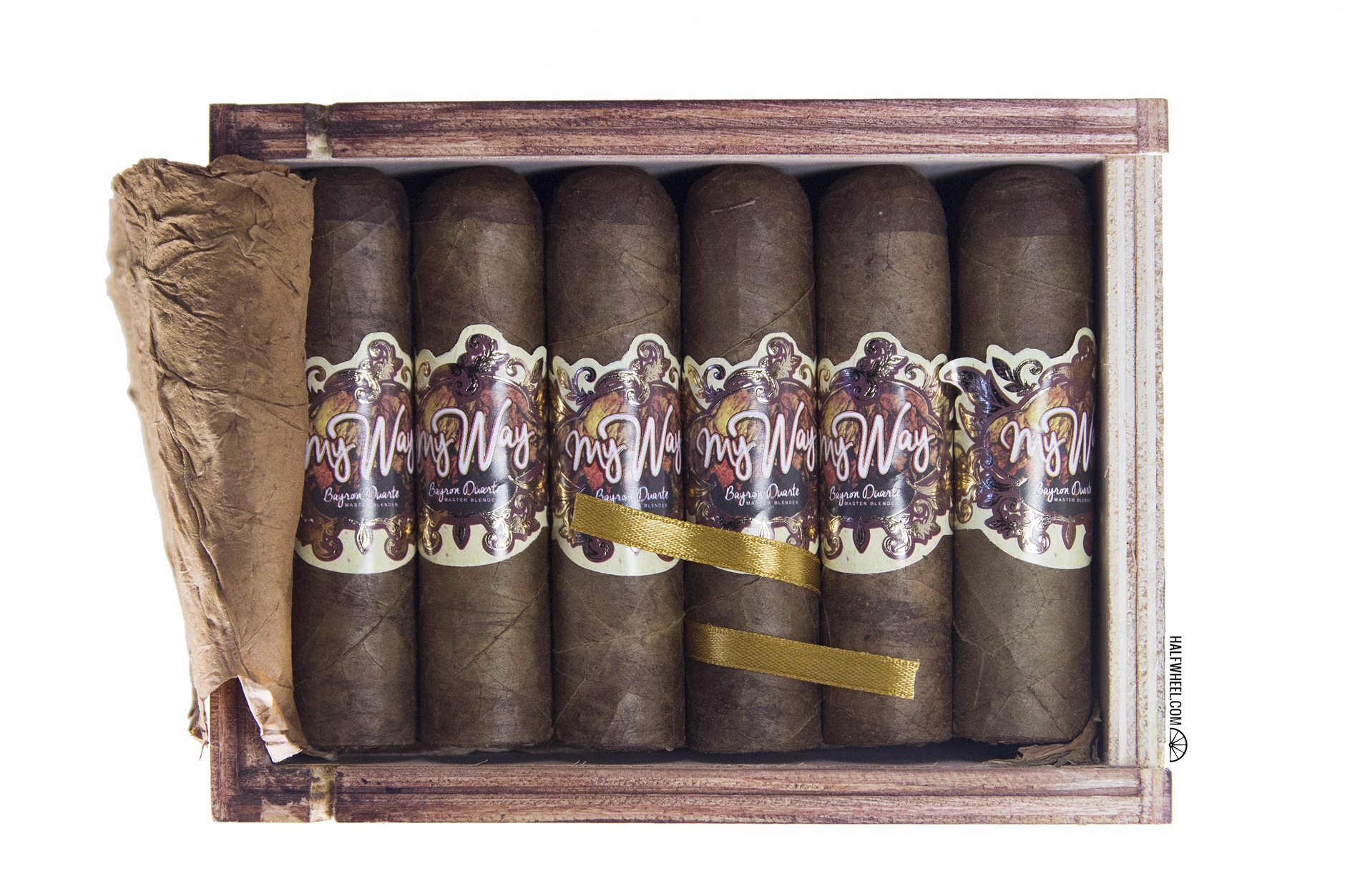 As you may know if you’ve visited a cigar factory or are familiar with how to roll a cigar, there is a very specific method as to how a wrapper leaf is applied. While it’s impossible to hide the veins of a leaf completely, the underside of the leaf—the part that doesn’t face the sun—is  placed so that the better looking part of the leaf faces the consumer, which means that it is laid facing up on the table when the cigar is rolled. This hides the veins and shows the smoother side of the leaf, with further attempts to present the best look handled by the individual applying the bands who tries to hide any large veins on the back side of the cigar, that is the side opposite the front of the band.

Yet Duarte decided to buck that trend, using a Mexican San Andrés leaf for the wrapper and turning it around so that its rougher—and some would say uglier—side faces out. Underneath that, Duarte chose a blend of Honduran and Nicaragua tobacco for the filler, with a Honduran binder holding it together.

The My Way by Bayron Duarte got its full release at the 2017 IPCPR Convention & Trade Show, with just 1,000 boxes of 20 cigars being produced, split evenly into 250 boxes of each of the four sizes: 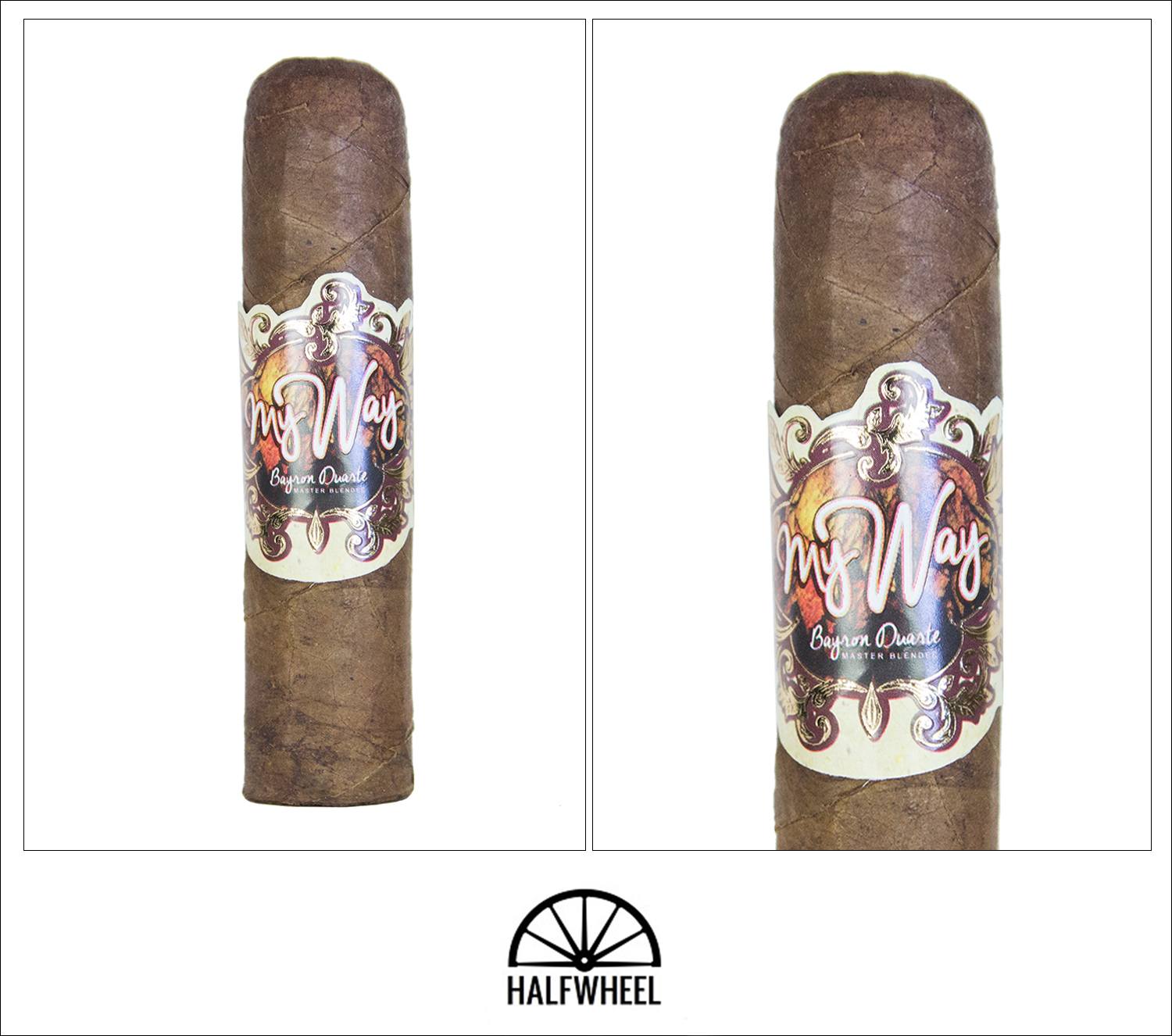 At 1 5/8 inches at its widest, the band on the cigar takes up a good bit of the visual landscape, and seems to take away from the fact the wrapper has been applied in a nontraditional method. That’s not to knock it, in fact I think the band brings a unique aesthetic to the project, but it is worth mentioning as almost conflicting with one of the biggest visual aspects of this cigar. Regardless of where you stand on the debate about when to take a cigar band off, I highly recommend taking it off early on this vitola so you can get a good look at the vein structure of this cigar, as well as what it looks like when a wrapper is applied with the traditionally wrong side facing out. It’s veiny and rough, but at the same time beautiful, as it is different ad shows a side of the leaf that many people might never get to see. Each of the three samples is rolled quite well, something you might not be able to tell simply by looking at it, with good and consistent firmness from head to foot. I’m surprised to find peanut butter sweetness coming off the foot of the My Way, but it is quite enjoyable, coming across as both fresh and inviting, with a bit of soil complementing it in various amounts. The cold draw is fairly open and offers notes of toast, pepper, and lumber, along with just a bit of the peanut butter flavor carried over from the aroma, though here it is more reminiscent of a peanut butter cookie rather than a freshly ground batch.

The first puffs of the My Way by Bayron Duarte Gordito continue along the peanut butter theme, leading with a flavor that suggest biting into a soft, freshly baked cookie. There’s plenty of rich, thick smoke to chew on, and even though the draw seemed loose before being lit, it’s almost perfect now that the tobacco is burning. The My Way begins to pick up notes of terroir rather quickly and is showing its Honduran roots along with some black pepper before the burn line has made it half-an-inch up the cigar. It’s somewhat hard to explain the specifics of Honduran earthiness until you’ve smoked a number of cigars that use tobacco from the country, though it is immediately recognizable for its medium body and lingering aftertaste. The fullness of the terroir retreats rather quickly to a much smoother profile, adding a bit of latte creaminess for a few puffs. While smoke production had yet to be an issue, by the time the burn line is three-quarters of an inch along and I take the band off, each puff results in a billowing of light gray smoke. Seemingly as quick as the cigar picked up its earth and pepper notes, it sheds them, adding a bit of vanilla and creaminess, though I’m not ready to call it vanilla ice cream or yogurt quite yet. The draw and burn have been quite good, but I’m most focused on the ash, which continues to hold on well, building into a dense clump of light gray with only small bits flaking off as the cigar heads to its second third. 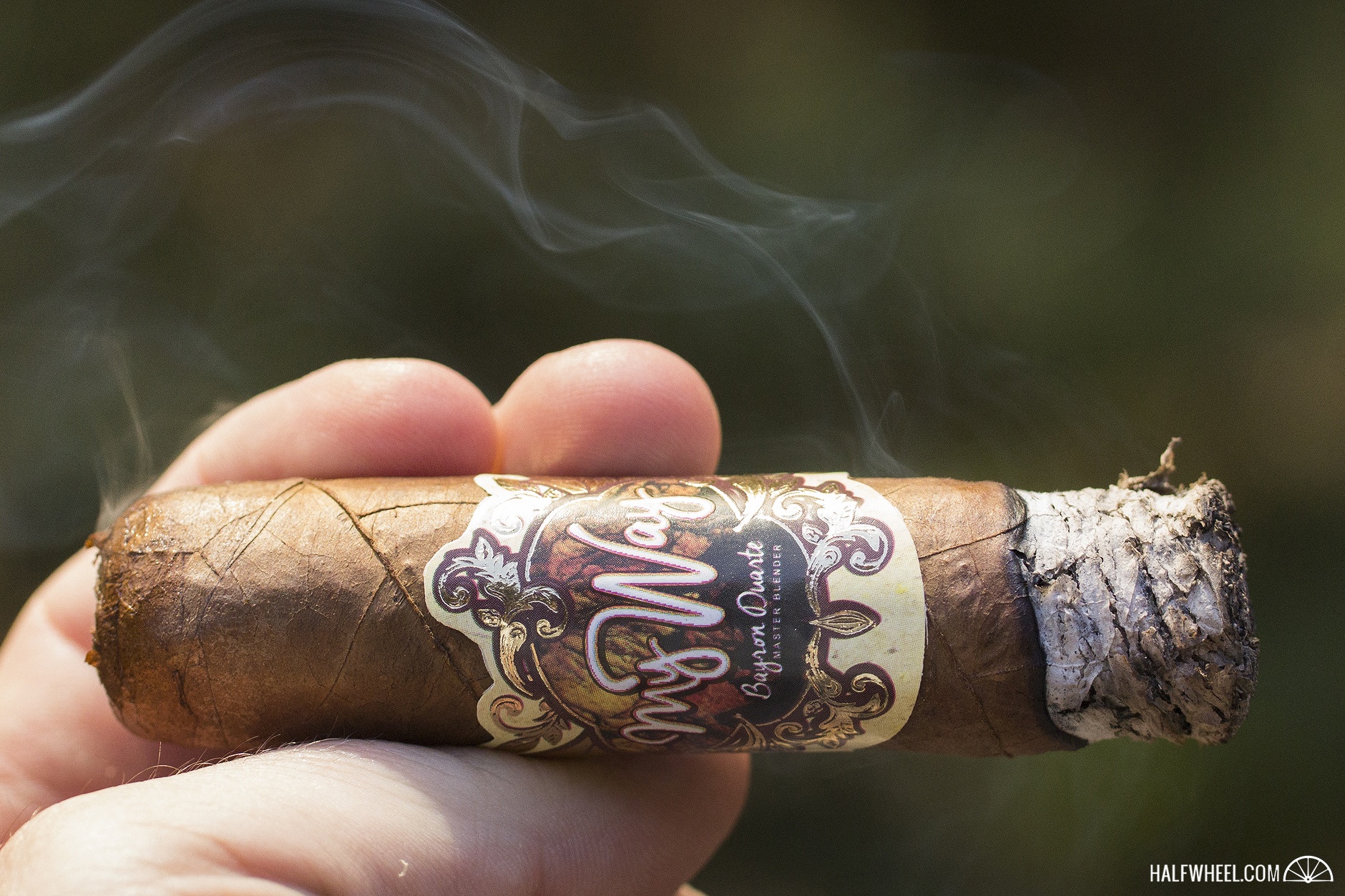 The cigar has continued to stay on the mellow side of medium as it starts its second third, though emerging aroma of mixed nuts and the reintroduction of a bit of earth have given it additional complexity and character. Given the My Way by Bayron Duarte Gordito’s short length and strong ash, it’s easy to lose track of where the first third ends and the second third starts, though those of lines of demarcation more applicable to these notes than the typical cigar experience. The smoke is as thick as ever, offering billowing clouds with each puff, with the burn line staying sharp and even as the ash drops right around the midway point. The flavors begin to get a bit more intense past the center of the cigar, and by the end of the second third, which seems to have flown by as the burn line quickly approaches my lips. The earthiness picks some rocky edge, which is amplified by a bit of heat, though I’m still quite happy with what the cigar is offering. 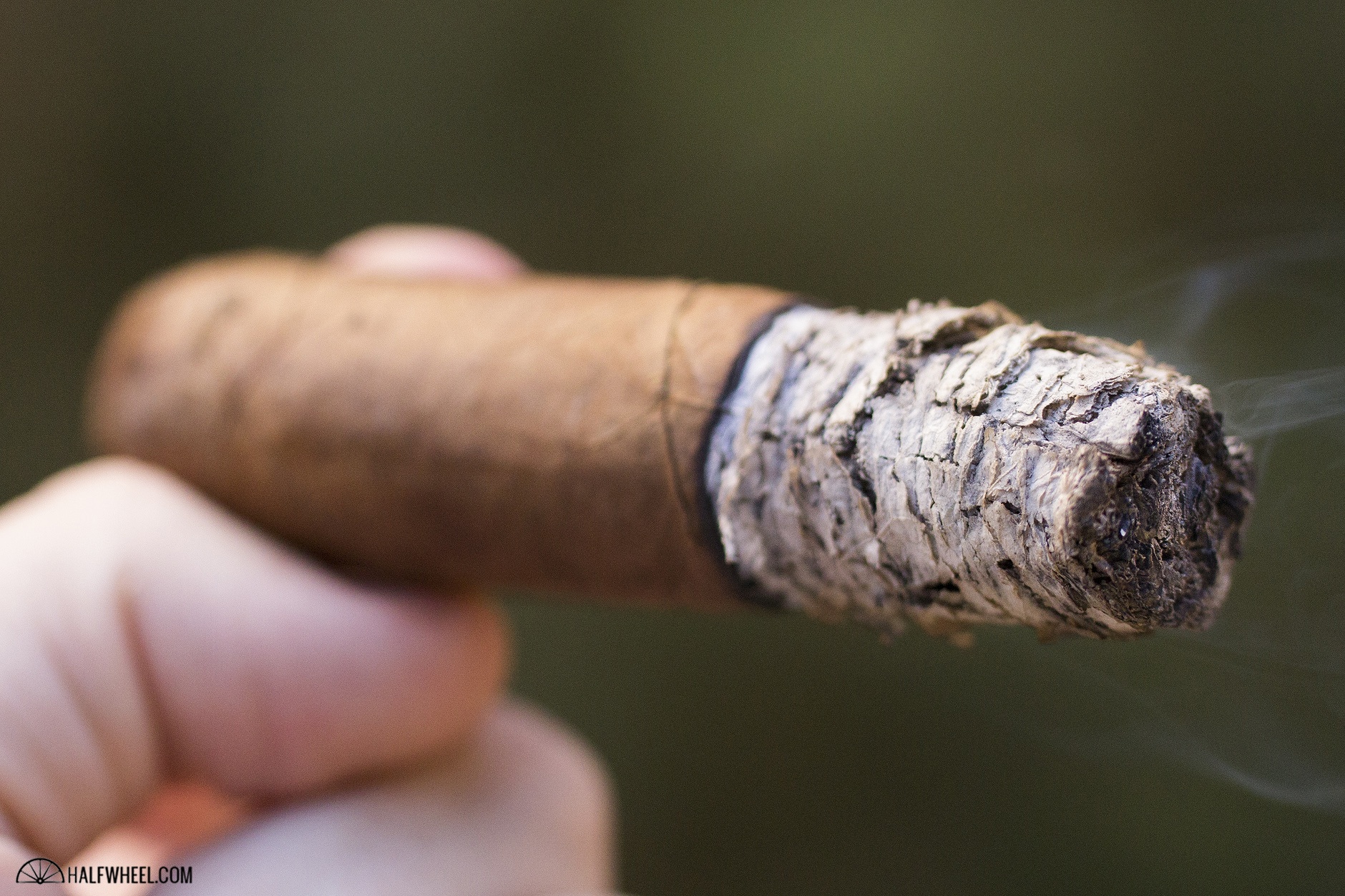 The start of the My Way by Bayron Duarte Gordito’s final third is arguably its best; it’s complex, balanced, and showing off nearly everything that the cigar has had to offer to this point. If I want to complain about something, the earthiness isn’t the most palate-friendly I’ve ever tasted, though it’s not particularly sour or anything off-putting, just a bit different, and almost certainly Honduran-dominant. The peanut butter is unfortunately long gone, and the Honduran terroir takes over the blend with some sprinklings of pepper to tingle the tongue. The wood becomes drier and sharper on the tongue, and it’s readily apparent the flavors are untangling from each other fairly quickly, bringing a slightly disappointing end to an otherwise very enjoyable cigar. Heat abets that process, forcing out what’s left of the creaminess and having me ready to call it quits on the cigar, though I salvage a bit of the final inch with a much slower puffing rate. I’ve long maintained that while Honduran tobacco is good, isn’t for everyone, and I have to think that the My Way by Bayron Duarte Gordito likely won’t win over smokers who don’t already like the country’s flavor profile. That said, there is some interesting complexity offered by this blend, though I’m not sure it shows the best of each country’s offerings. Even with the Mexican San Andrés wrapper and Nicaraguan filler, the blend came across as Honduran dominant, something I’m not complaining about, yet it seems to mask the best aspects of each country’s signature flavors. Bayron Duarte certainly did this cigar his way, especially when it comes to the application of the wrapper, with the result a solid addition on all fronts.