It’s called the Cigar City, but there are now more breweries than cigar factories. Tampa—specifically its Ybor City neighborhood—was once the capital of the global cigar industry. A drive through Ybor City shows many of the old cigar factories still standing, some dilapidated and vacant, some renovated to apartments and offices, but there is one where cigars are still rolled. Just one. 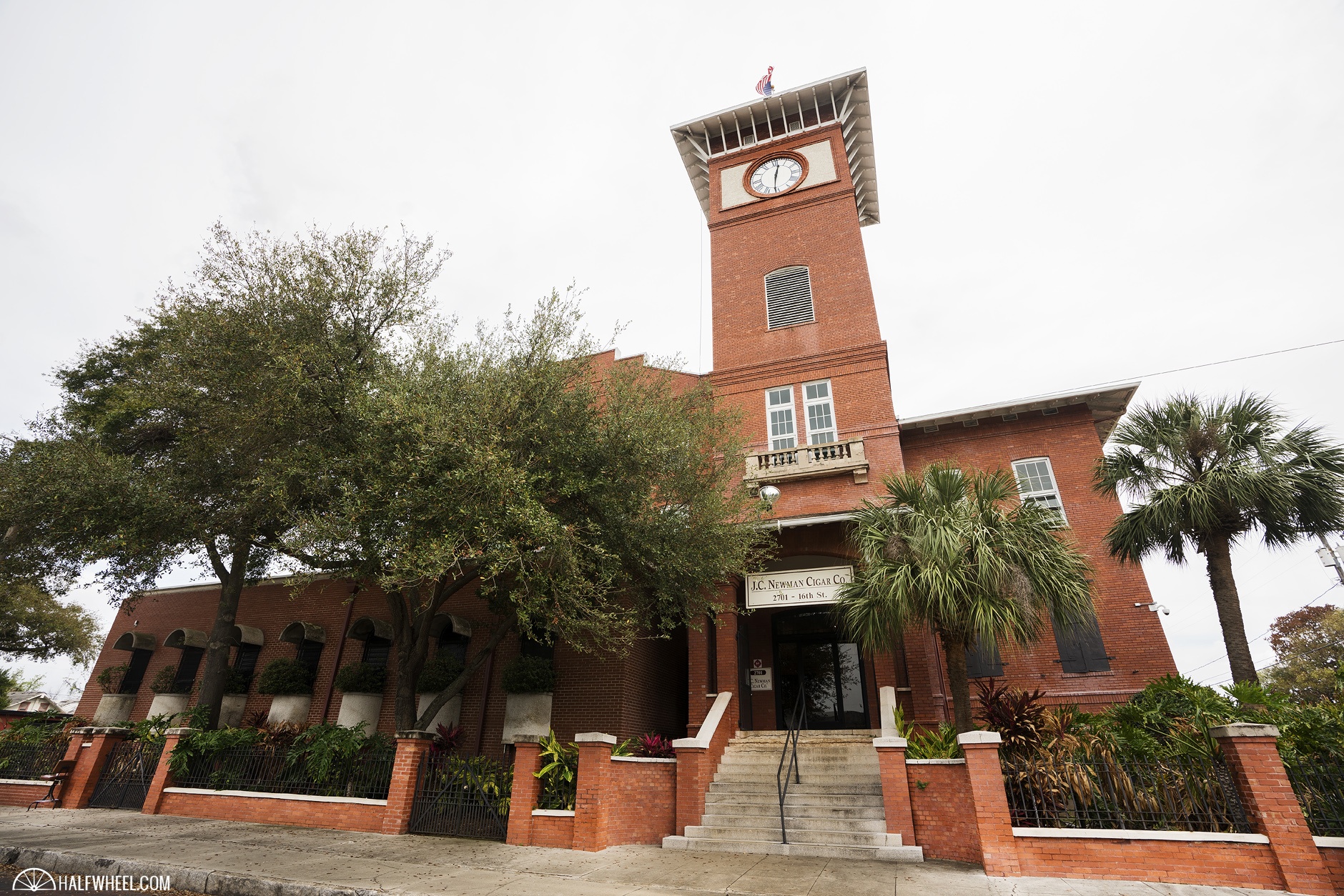 The outside of the El Reloj cigar factory in Ybor City. The massive clocktower towers over large building. Working in a 108-year-old building means constant upkeep. The roof had been replaced shortly before our visit. Visitors are greeted by a full-fledged museum. The centerpiece is the restored clock which chimes regularly. Taking the picture in the bell tower required some effort that any sane attorney wouldn’t approve of. That said, here’s what the inside of the bell tower looks like. Eric Newman (L) stands at the head of the conference table. His reflection displays off a photograph of his father Stanford Newman (L), Eric (C) and Bobby Newman (R). The building is so large that both Eric and Bobby Newman struggled to identify where this picture of the hygrometer came from. Our belief is that it was from the third floor, but there were similar old-school hygrometers throughout the building.

In 1953, Stanford Newman began a test to see if the old E. Regensburg Cigar Factory in Tampa would be suitable for his father’s cigar company. A year later, Julius Caeser Newman moved his company from Ohio to the Cigar City.

The Regensburg factory was built in 1910, but the massive factory was better known as El Reloj, Spanish for the clock, due to the tall bellower that sits at one corner of the factory. In 1951, Regensburg left after mechanization took employment from 1,000 rollers to around 300. Enter J.C. Newman.

In 2020, J.C. Newman will celebrate its 125th anniversary and part of those celebrations will be an updated El Reloj factory. The company plans to turn it into a cigar destination, though it’s not as if that isn’t the case at the moment.

The building houses a multitude of things, most notably, a cigar factory on the second floors that produces 60,000 cigars. In addition, a museum and the J.C. Newman offices are on the first floor, there’s a machine shop, a museum area, complete with exhibits detailing the building and company’s history. And lots of storage. The building is so large and contains so much history, that some members of the Newman family struggled to identify where various pictures we took were taken.

And while there’s a two-year project planned to update the building, it’s not as if the company hasn’t been doing that for the last half-century. We arrived shortly after a new roof had been installed. The museum area is substantially more involved than a few pictures with captions; i.e., a museum professional certainly helped the company construct it. In 2002, the company restored the building’s famous clock which had been dormant for nearly 50 years after a woman complained it was waking up her baby.

The clock now chimes, every day.

It’s a bit challenging to understand the scale, but this room is the size of a small garage. Tobacco is opened dried out on the third floor and then sent through a door in the floor to this room on the second floor.

Picadura, i.e. scrap tobacco, is brought in from the Fuente and Padrón factories, as well as J.C. Newman’s own PENSA factory in Estelí.

It’s a mound of tobacco.

Eric Newman is frustrated by this sight. The mask irks him, largely because it reminds him of the government regulation. No factory has seen more sitting U.S. Congressmen than J.C. Newman’s El Reloj factory.

A total of 135 employees and two dogs work out of the nearly 100,000-square-foot building. There are two separate cigar operations: the antique, human-operated cigar machines that produce 60,000 cigars are overseen by 15 employees while two employees make cigars entirely by hand, part of Drew Newman’s upcoming Fourth Generation Cigar Co. project. The machines are constantly refilled, using buckets from Home Depot, with the filler mixture, by hand. Filler tobacco waiting to be placed into cigars. Workers are constantly inspecting wrapper leaves, stretching them and then placing them into the machines. 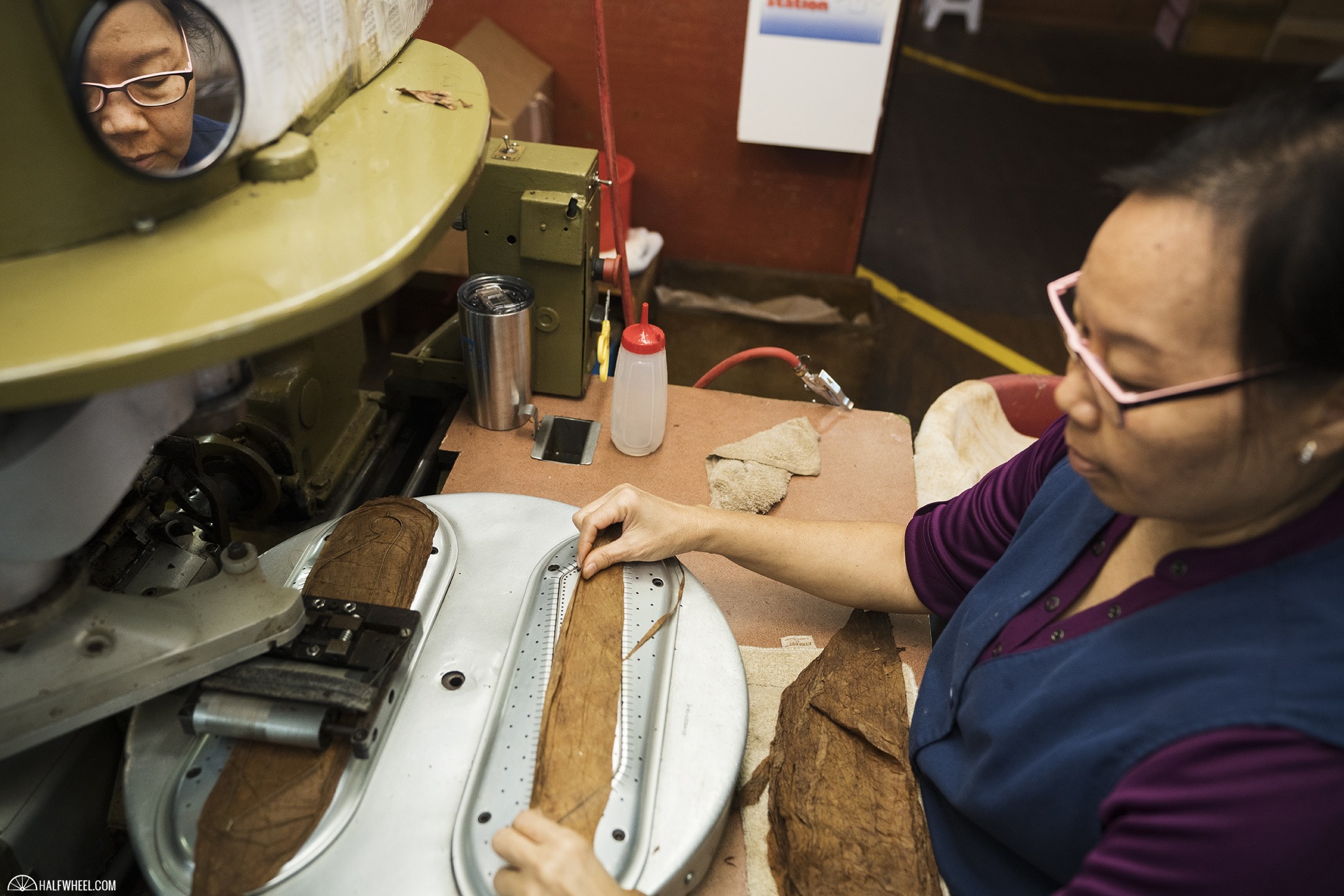 A worker stretches the wrapper out. It’s rare to see this many cigars stored on top of one another, but this isn’t a normal cigar factory. There’s extra machines and dedicated mechanics but sometimes, repairs are made on the fly. While it’s not too far from the ocean, misters overhead pump out a fair amount of humidity. A few years ago, the Newmans created buttons that said “Save Tampa’s Last Strippers.” Technically, the buttons said “Cigar Strippers” but that was hard to see. They were referencing the workers who strip, or devein, wrapper leaf. Using machines is common as the machines break less wrapper than human hands. The concept is that everything is American-made: the cigars, the tobacco, the bands, the boxes, the clasp. Everything. As such, the cigars won’t be cheap. They are expected to formally debut later this year.

Because of the Newman family’s political advocacy, the factory receives a fair bit of politicians. As such, you see charts and maps throughout the factory stressing the importance of the cigar industry and the uniqueness of what’s taking place at the El Reloj factory.

Up until recently that operation was just the antique machines, which use mixed filler tobacco from the Fuente and Padrón factories, as well as the Newman’s own PENSA factory in Estelí, Nicaragua. That filler is mixed into a special blend which is then placed inside of various wrappers to create brands like Factory Throwouts.

The machines are different from those used by the companies responsible for mass market cigars like Swisher. These are older, slower and finickier. And while they are still machines, they won’t work unless a human is there to place the tobacco leaf, fill the blended tobacco or remove the finished cigars. Quite simply, there is as much movement over the course of a minute as you’d see at any factory, but the difference is just in output. Jeannie is one of Bobby’s dogs. She is an ambassador for Southeastern Guide Dogs, which Bobby sits on the board of, an organization that trains dogs to serve as guide dogs for the visually-impaired and veterans. She roams the office, seen here protecting the hallway from stray bloggers.

For the Newman family, the red brick building is a matter of pride. It could very easily move this production to Nicaragua, where it would be far cheaper to make the identical cigars, but it wouldn’t be the same. The Newmans are Cigar City and until someone else resurrects another old building, Cigar City is J.C. Newman.

Text for this post was written by Charlie Minato.