Viaje first tackled seasons, then holidays, and now appears to be onto food, as in March the company announced its two newest lines, Señor Andre’s Chicarrones, which come in three different varieties, and the Viaje Jalapeño. This of course, after the growth of the Stuffed Turkey, the related Farmer Bill Hatchet Handle and Secret Sauce.

The company was as about as tight-lipped about the details of the Jalapeño as it has been about any of its releases, save for the Friends and Family, a line that’s existence seems to be just barely acknowledged by those who speak for the company. When the announcement was made via Facebook, only the factory, size, box count and shipping date were released; nothing about the blend or how many cigars were produced. From that post:

To bring the cigar to life, Andre Farkas decided to cover the upper half of the cigar with green foil, with about two inches twisted at the head of the cigar and draped back so as to replicate the look of a jalapeño pepper stem. The band gets moved to the middle of the cigar and sits on top of the foil. The boxes doesn’t get nearly the artistic treatment that Señor Andre’s Chicharrones got, though both share a natural wood base. Instead, the Jalapeño gets a black sticker that wraps around the box to serve as its primary identifier, in addition to the frequently used Viaje seal sticker. It’s a fairly familiar presentation that Viaje fans should instantly recognize while also noticing the distinct marking for this particular release. Given that you can only see the lower half of the cigar before taking the band and foil off, it’s tough to get a full impression of the Viaje Jalapeño, though the bulbous, nipple tip of the vitola shows and a fairly dry and dark, earthy brown wrapper that doesn’t have much in the way of veins or tooth but shows some mottling as well as a pair of what appear to be water spots on the foot. The small cap is applied well and overall the figurado looks to be rolled very well with virtually invisible seams. It’s fairly firm to the touch but not so much that it warrants being called hard, except for one sample that does deserve that descriptor. Because of the vitola, it’s hard to get a representative pre-light aroma from the foot of the cigar as it is so small and doesn’t put off an accurate impression of all the tobacco in the blend. The wrapper is fairly neutral but I get a bit of orange citrus from it, while the cold draw is a bit varied; one cigar adds a bit of bitter chocolate, espresso and a touch of pepper, while another sample gives me a touch of cool creaminess with a bit of, yes, jalapeño—almost like a cream cheese spread.

There’s a fair amount of resistance to the draw in the first puffs of the Viaje Jalapeño as the air gets routed through the small nipple foot but it quickly opens up and you can feel the constraints being lifted with every puff at one point, which in turn helps the smoke production immensely. It takes those first few puffs to get the flavors fired up as well, as at first I get a bit of earth but pepper comes rushing in as the burn line begins to turn the corner. Almost as quickly as they build the flavors retreat a bit and settle in at an enjoyable medium-full level, with the pepper still doing most of the talking but with an underlying earthy robustness in harmony. Retrohales in the first third are punchy and peppery, yet still fairly manageable if for no other reason than their familiarity, and I can’t say I have gotten much if any of the jalapeño note that may or may not actually exist from this tobacco. The burn of the cigar has been well above average, requiring no relights or touch-ups, and the ash does a decent job holding on. Approaching the second third, the flavor begins to dull out just a bit and picks up a much more pronounced note of earth while I think I begin to get the first touches of the elusive jalapeño note. While I’m usually a big fan of earth flavors from cigars, I’m getting more dirt than earth from the Viaje Jalapeño at the start of the second third, though there is a bit of punch coming through from both the black pepper and the jalapeño note that is coming around. It’s not a common theme through all three samples, but it seems to be one point where the cigar veers off track just a bit. For my palate it’s not an overwhelming note, but it is rather lingering much in the way that a jalapeño leaves a lasting tingle on the tongue. It begins to slip away just shy of the midpoint and gets replaced with a bit of chalk and a slightly metallic taste, which create a distinct and slightly less pleasant sensation, while retrohales are still punchy but manageable. I’m not quite sure what to expect from retrohales of a cigar named Jalapeño, as I think of the nasal reaction from eating the pepper to be more passive and uncontrollable, whereas with the cigar it’s a more active and engaged process; if nothing less my nose isn’t running and seems to be getting more of a black pepper sensation. By the time the final third is in my sights, there are faint touches of chocolate starting to emerge, while the aroma has picked up a touch of campfire. 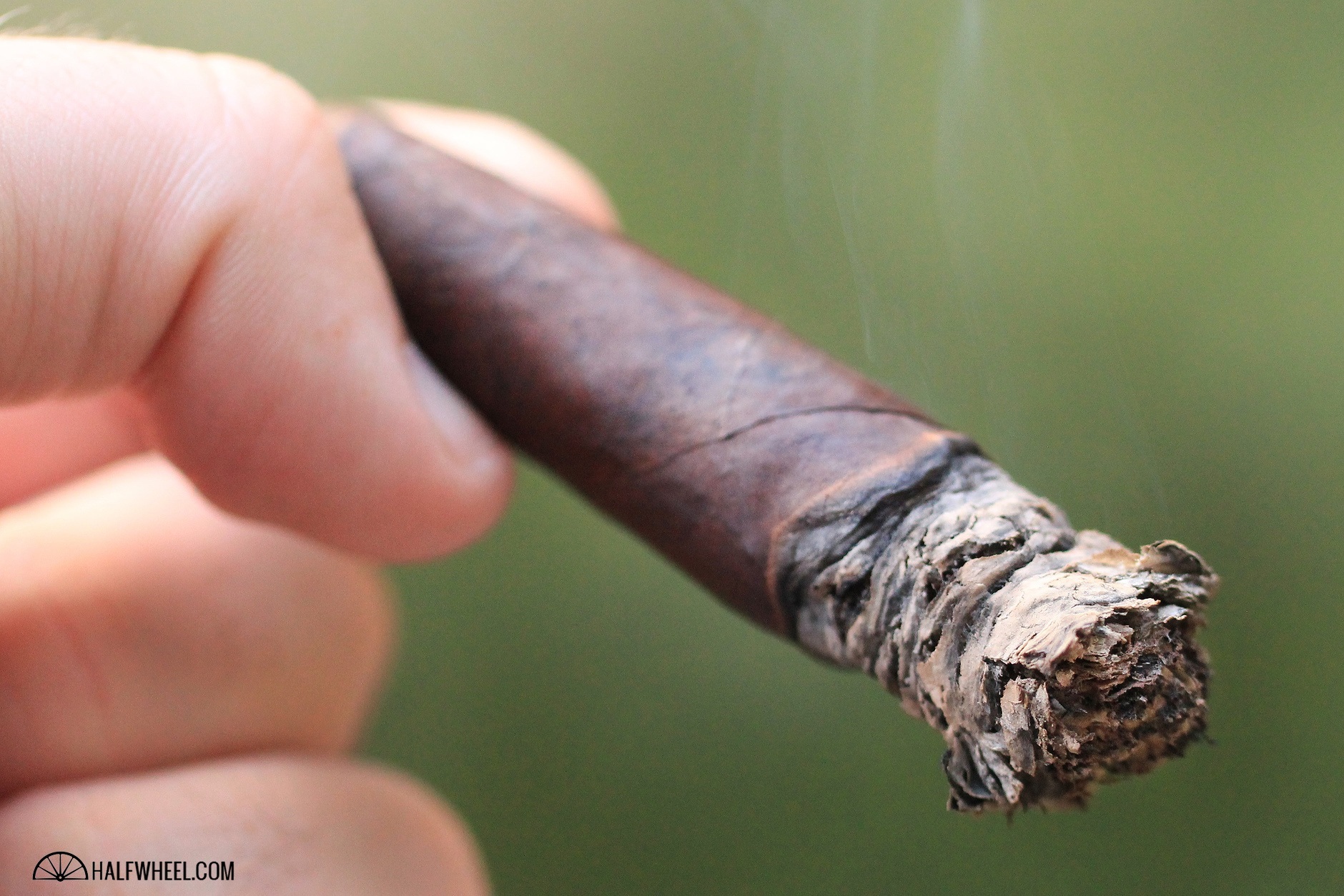 Maybe I’m crazy, maybe I’m just susceptible to the power of suggestion, or maybe it’s actually there, but I keep finding myself getting the occasional jalapeño pepper zing from the Viaje Jalapeño. It’s not strong, it’s not front and center, but it still seems to be there, and in some ways I’m glad to see that Farkas delivered on the name of the cigar, yet at the same time I find myself questioning my own taste-discerning abilities. I get a good bit more tingle in the mouth from the cigar, and definitely a jalapeño-like tingle that hasn’t been found yet to this point. While still peppery, the retrohale has again shifted and now has an almost minty aspect to it, a bit lighter but still capable of delivering a sting to the nostrils. The final third also seems to have a much slower burn rate than the first two sections and while there’s no problem keeping the cigar lit and burning, the burn line begrudgingly inches toward the end. While I could probably keep it going a bit further, I find myself wrapping up the Jalapeño with about an inch left as the flavors just get a bit too much for my palate to enjoy. Update: The review briefly showed a slightly lower score. The scoresheet for this review was not filled out completely. The score is now accurate.

With no notes as to what to expect about the Viaje Jalapeño other than that it offered "the ultimate balance of heat and flavor," I'm generally pretty pleased with what the cigar had to deliver. I'm still not sure how much actual jalapeño flavor I got from the cigar, but there is definitely plenty of pepper and a good bit of palate-tingling flavor, so I'm comfortable saying the cigar lives up to its billing. While the packaging and creative may not win for everyone, the cigar itself should end up being a decent palate-pleaser for those looking for something with a good bit of distinct kick in a small format.