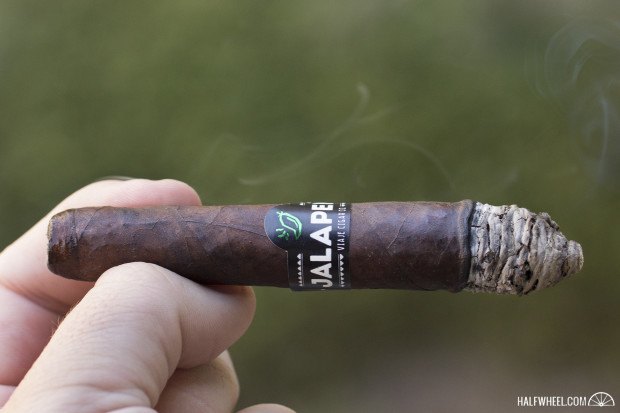 In March 2015, Viaje announced that it would be releasing four new cigars with a food theme behind them, the trio of Señor Andre’s Chicharrones and the Viaje Jalapeño.

For such a seemingly innocuous cigar as the Jalapeño, Viaje was not very forthcoming with information about it, guarding it with about as much secrecy as it does the Friends and Family line. While the blend and number of cigars was withheld, it was confirmed t be made at Fabrica de Tabacos Cubanas S. de R.L., otherwise known as Raíces Cubanas. What else was known about the cigar came via Facebook, where the company touted the 4 7/8 x 51 perfecto this way:

This wasn’t the first venture into food themed cigars for the company, having previously released the Stuffed Turkey and accompanying Farmer Bill Hatchet Handle as well a cigar called Secret Sauce.

Here’s what I said about the Viaje Jalapeño when I reviewed it in April 2015:

With no notes as to what to expect about the Viaje Jalapeño other than that it offered “the ultimate balance of heat and flavor,” I’m generally pretty pleased with what the cigar had to deliver. I’m still not sure how much actual jalapeño flavor I got from the cigar, but there is definitely plenty of pepper and a good bit of palate-tingling flavor, so I’m comfortable saying the cigar lives up to its billing. While the packaging and creative may not win for everyone, the cigar itself should end up being a decent palate-pleaser for those looking for something with a good bit of distinct kick in a small format.

For as much as any cigar maker can try and equate the shape of a cigar to its name and packaging, the Viaje Jalapeño at least deserves a good mark for effort. The shiny green foil wrapping is a bit more Christmas-looking than vegetable and the thickest part of a jalapeño is almost always towards the top, but the twist and bend at the top establish the stem well. Underneath that foil is a very dark brown wrapper, a bit veiny but showing particularity sizable tooth, sitting on top of what looks like a well rolled cigar despite having just a bit more give than I prefer. I can’t help wondering if it isn’t simply the power of suggestion, but I do a get a bit of jalapeño in the nose from the wrapper, while the foot seems to be even more concentrated, much like the juice in a jar of peppers. The cold draw is on the firm side but I trust it will open up once lit, though I’d be lying if I said I didn’t roll it around in my fingers a bit to loosen up the tobacco, which is fairly tightly packed. The flavors are much milder and don’t have the jalapeño note, but instead a bit of earth, chocolate and dark roast coffee, with a bit of Dr. Pepper syrup providing both sweetness and spice.

While the first puffs of the Viaje Jalapeño are incredibly labored and tight, there is a point that come seemingly out of nowhere—mainly since I can’t see the foot of the cigar—where the draw opens up wonderfully and air begins to flow freely through the cigar, almost too freely in a sense. Those labored flavors are a bit more oriented toward coffee grounds, damp and a bit heavy on the palate, before the flavor lightens up a bit due to the airflow and the Dr. Pepper note returns to provide complexity via sweetness and a touch of pepper. From there the cigar becomes incredibly flavorful, offering a bit of sweet heat on top of a pleasantly earthy base, neither component overstepping their role save for an occasional scratch in the back of the throat. The aroma is just as pleasing if not more so at times; rich with notes of chicken broth and cedar but never overly heavy or packing too much pepper. What it does have in that latter department is cloaked in a bit of orange zest sweetness, helping soften what comes across as primarily white pepper in the nose. The richness begins to thin out after the Jalapeño has burned just over an inch, and while the flavors are still consistent, they aren’t quite as enveloping of the tongue, sitting on top of it rather than wrapping around it. I haven’t yet gotten a specific jalapeño taste when the first ash clump comes off, but I do find my palate wanting to get at least a bit of it, though it manifests more as a peperoncino than jalapeño at the moment. As the burn line begins to approach the midpoint of the cigar, the fullness of flavor begins to return, though it appears to be at the expense of the burn line. 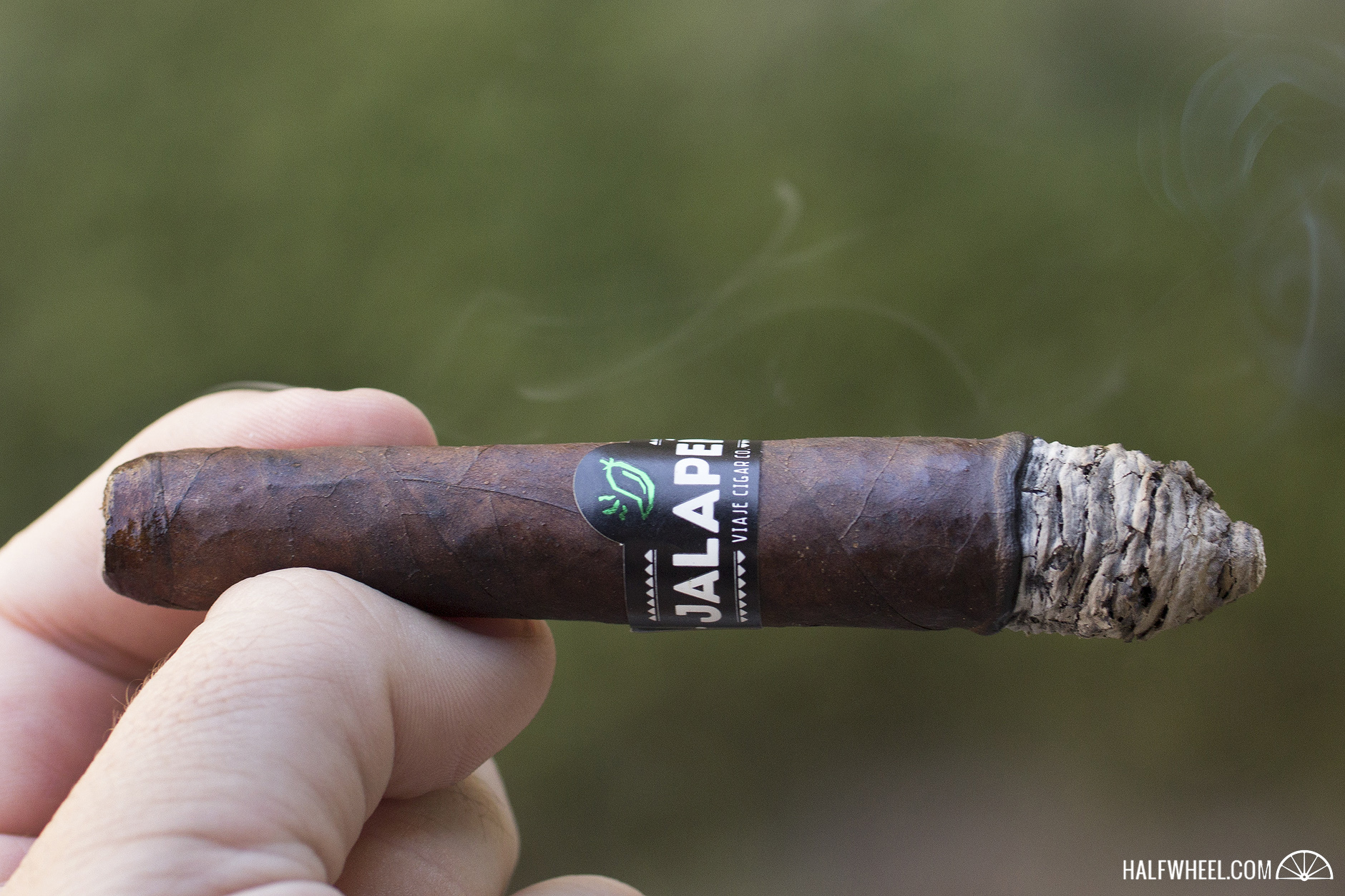 At almost exactly the halfway mark, the Viaje Jalapeño runs into a patch of wrapper and possibly some binder that simply won’t burn, though the filler has no problem chugging along smoothly. Instead of torching it off, I choose to simply knock the ash and the offending spot of leaf off, which get things back to being fairly even. The cigar hasn’t deviated much from its recently returned full flavor profile, and I’m impressed that pepper hasn’t become an overwhelming part of the cigar. The cigar becomes a bit more meaty heading into its final third, while black pepper begins to hit the nose with a bit more punch and prominence than it had earlier. The draw seems to have tightened a bit, something that has been happening for most of the second half but is now much more noticeable, especially when comparing it to where things were in the first third. Smoke production has also slowed a bit; while the Viaje Jalapeño was never a smokestack, it now emits smaller wisps with each puff. The mint flavor I found via retrohales when I smoked the cigar about a year ago are still present, again relegated exclusively to the nose. Burn issues once again emerge in the final two inches or so, as the wrapper runs into another spot that it can’t seem to burn through and the burn line begins marching up one side of the cigar leaving the other in its wake. There is also a bit of a black ring and puffiness at the burn line, and while I could easily put the cigar down with a bit more than an inch left, I decide to give it one last touch up to see if I can get a few more flavorful puffs out of it, though combustion seems to be winning a battle that I’m not in the mood to fight.

Color me impressed by what a year has done to the Viaje Jalapeño. While I wasn't floored by the cigar when I first smoked it, and really am not still, I am much more pleased with the flavor profile that it has to offer. Pepper is certainly no stranger to the profile but is fairly restrained and softened with the rest, while the backing notes show a new richness that I don't recall the cigar offering when it was new, which is consistent throughout the cigar save for a few puffs between the first and second thirds. I would have hoped that burn issues would be non-existent but that was not the case, though it didn't affect the cigar too severely. The moment where the draw opens up in the first third is an almost hallelujah experience, with a very enjoyable progression from there. If you still have these or can still find them, I'd certainly suggest trying or revisiting them, as they are smoking quite well at the moment. A good showing of what a bit of rest can do to a cigar.