There was a time when the Viaje Friends and Family was truly for friends and family. I remember the first time I brought up to Andre Farkas at the 2011 IPCPR Convention & Trade Show, he seemed a bit caught off guard that I even heard of the release, which he handed a few samples of to some of his close to retailer, and definitely didn’t want to talk about the cigar. A few months later it mysteriously appeared in nearly non-existent supply at a slightly larger handful of retail shops, but was painstakingly challenging to actually acquire. I probably made a dozen phone calls only to track down five—from three different retailers—of the original release.

Nearly a month after the latest release—Merci— shipped, two pages of Google searches revealed six retailers with the cigar in stock. It seems the series—in its fourth year—is like most of the rest of Viaje’s portfolio.

Merci measures 5 1/4 x 54 and features a new version of the silver on white Friends and Family band. Like the rest of the releases, it is offered in 15-count boxes and it is the most expensive release in the series to date with an MSRP of $15.60. As it has done for all four releases, the company is unwilling to comment on any details of the cigars other than that it in acted shipped to some, but not all, Viaje retailers. The only time I’ve ever encountered Farkas—or anyone at Viaje for that matter—talk about the release was at the 2011 IPCPR Convention & Trade Show. He described it as his Cohiba. A reference to the famed Cuban brand that once began as a private cigar for Fidel Castro, before becoming a diplomatic gift and then becoming a commercial release in the 1980s.

All four releases have had a soft press and covered foot. My first thought after the cigars arrived was—great, you’ve made an already challenging cigar to photograph even more difficult. Photography concerns aside, I’m not a huge fan of the new bands compared to the older ones. That being said, the cigar does look great. There was a pretty big difference in the amount of veins on the slightly red wrapper with the one in the studio devoid of most and the sample I photographed for the review containing quite a bit. Aroma off the foot is somewhat subdued for a Viaje: cocoa, sweet charcoal barbecue and red pepper. The cold draw is slightly open with the Merci presenting lots of red pepper and a touch of fairly intense ammonia that reminds of a curing room.

The Merci begins with cinnamon, roasted cedar, a sweet chocolate reminiscent of a Hostess donettes and some grainy whiskey flavors and red pepper. Each sample sees the draw open even more from the cold draw, which makes a bit of elementary sense given the covered foot. That open draw means things burn slowly and there’s tons of smoke. The flavor settles into a mixture of cedar, red pepper, some brownie like chocolate and a honey note that only seems to want to appear when the cigar heats up a bit. While I enjoy the added sweetness, there’s a bit of harshness that quickly follows it, but it’s worth the trade-off in my opinion. Construction is phenomenal through the first inch of each sample: even burn, tons of smoke, an open draw that isn’t to my linking but would please most I imagine and a very firm ash that almost seems glued to the cigar. 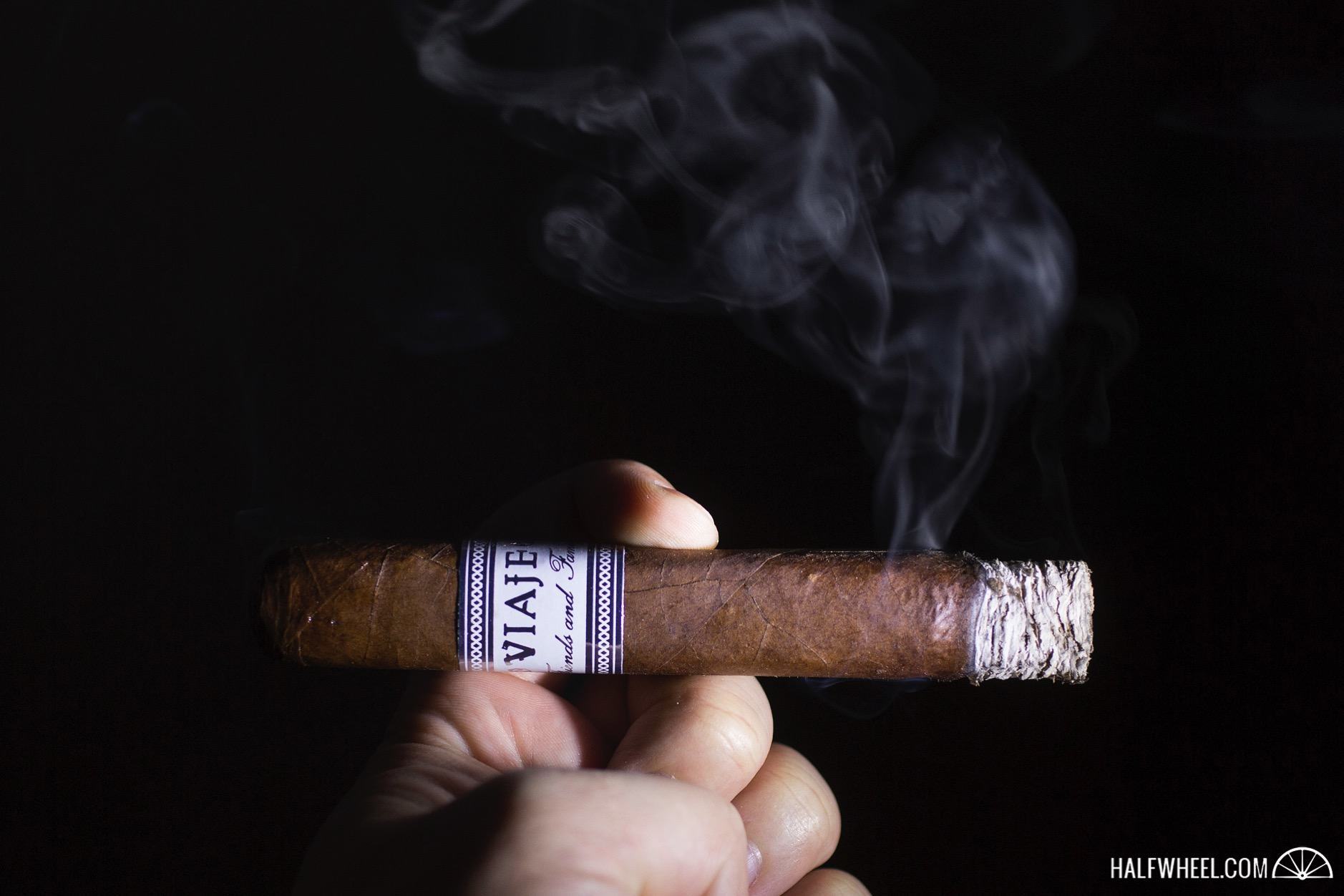 Things get sweeter in the second third, even as the cocoa begins to fall off. Instead, there’s a sweet tea note underneath some burnt cedar, grain and minerality. Red pepper and orange are the first parts of the retrohale, but the Merci transitions into a big charcoal note before a meatiness comes in. It does not have the same barbecue flavor that I found in the first third, instead it’s a deconstructed barbecue. The finish continues the concept with grain and a green jalapeño pepper. There’s also an uptick in strength for the Viaje, now easily medium-full. Fortunately, construction remains the same and I keep smoking without any need for a correction. The profile dries a bit as the final third of the Friends and Family Merci gets going. Some earlier flavors rearrange themselves with meatiness increasing in profile while the cedar—and to a much greater degree the sweetness—lessens. Oak, leather, coffee roasting flavors and saltiness all add themselves to the retrohale, which still has some citrus and now a red pepper. It does not have the acute transition that I found in the second third, but it still is quite diverse. Somewhat surprisingly, I find the nicotine to recede back down to medium. Fortunately, construction remains the same. With an inch left, a sourness develops. 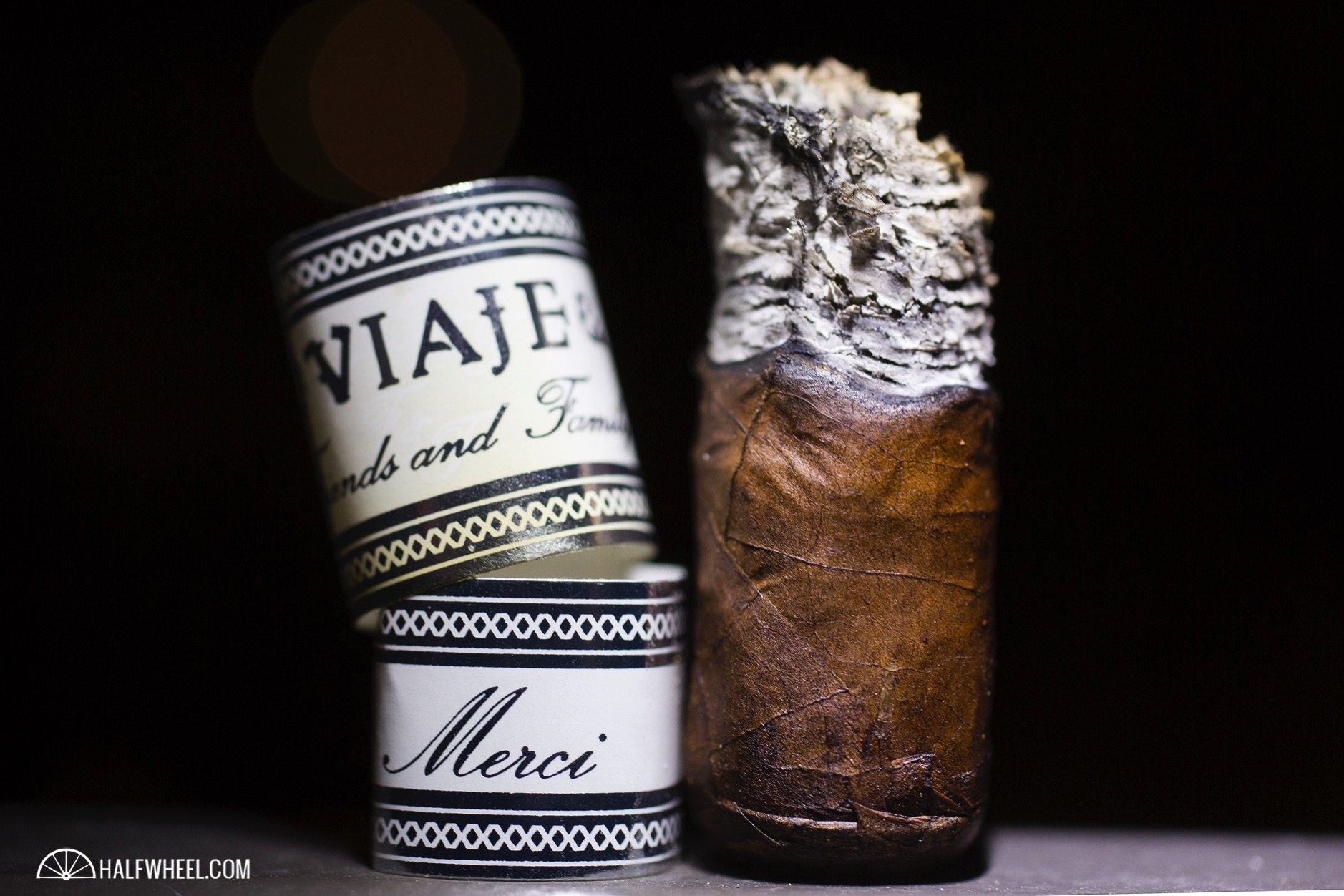 It might have been the size, the soft box-press or the semi-loose draw, but I’m reminded a lot of a Padrón Serie 1926. While I’ll be the first to admit the flavor isn’t close to identical, there’s definitely a lot of similarities. Friends and Family has carried some of the highest prices in the Viaje portfolio, but I haven’t necessarily held it in the highest regard in terms of the Viaje’s offerings. Some have been great, some have been okay and I agree with Brooks Whittington that the original release didn’t age particularly well. While I might wonder whether the series still lives up to the name, Merci is a very good cigar, one that I would gladly smoke any day of the week.