In 2011, Viaje decided to commemorate Thanksgiving with a playfully-named 6 x 60 cigar called Stuffed Turkey, which has since grown to be offered in the fitting varietals: Dark Meat and White Meat.

It then decided to create a whole story by adding Farmer Bill Hatchet in 2014. Farmer Bill was the guy who got the Stuffed Turkeys ready for their release. Last year, the company expanded on the story by saying that Farmer Bill had a helper, Farmhand Andre, which became the latest cigar in Viaje’s Thanksgiving story. 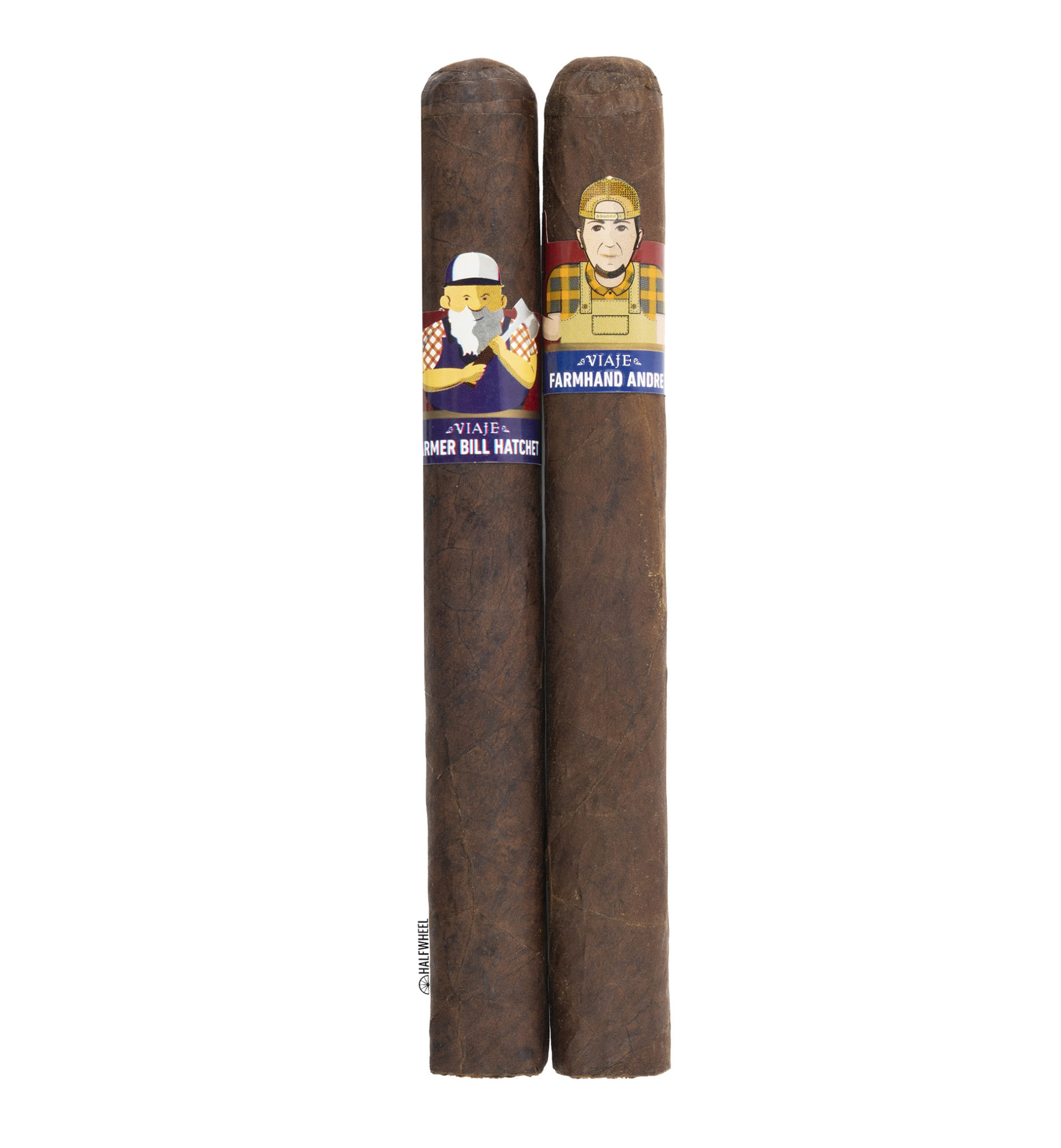 As for the cigar, Viaje didn’t opt to say much. It’s a 7 x 52 box-pressed Churchill with an undisclosed blend from an undisclosed factory. Its character is a reference to Andre Farkas, Viaje’s founder.

It shipped in mid-November alongside the Wilshire and La Jolla. 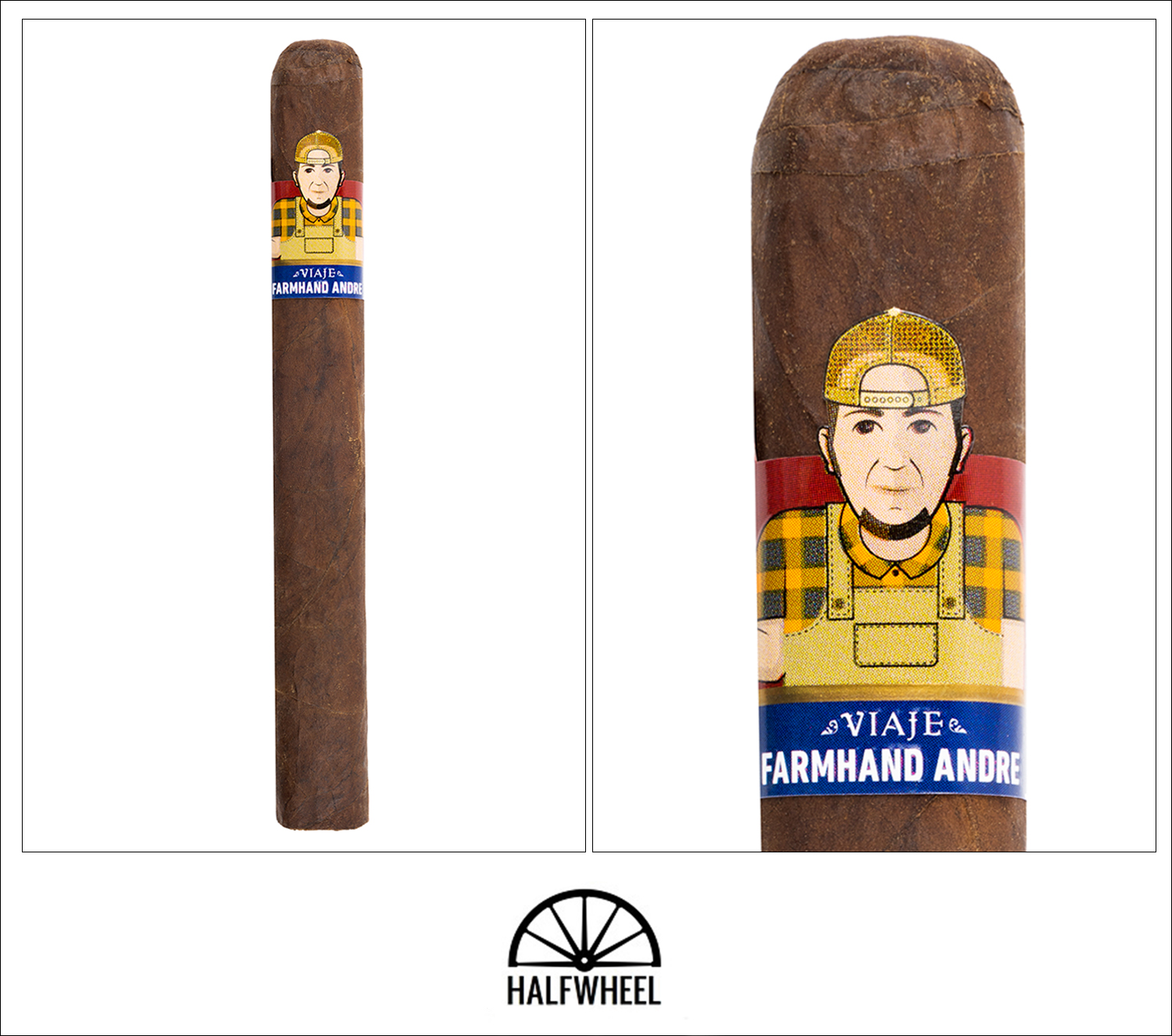 Viaje makes a lot of different cigars, but none of them tend to be this long. The wrapper is dark with some minor creases and imperfections—wrinkles and inconsistent color—but is otherwise fine. Aroma from the wrapper is semi-sweet with a bit of tomato and sugar, right around medium-full. The foot smells like an aging room at a cigar factory joined by some deep chocolate, raisins, creaminess and a mild amount of ammonia. The cold draw is somewhat open and is very clearly AGANORSA. It has some chocolate and black pepper, as well as some of the aforementioned tomato flavors.

The opening puffs of Farmhand Andre are an interesting mixture of lemon-lime, black pepper, earthiness and bits of chocolate. Pretty early on a distinct bagel-like bread flavor enters the profile, later joined by creaminess, earthiness, leather and some black pepper. The finish is more of addition by subtraction, a clearer profile of bagels, creaminess and a touch of black pepper. Retrohaling delivers burnt leaves, creaminess and minerals. It finishes with some apples and an artificial raspberry. Flavor is medium-full, body is full and strength is medium-plus. Just before the halfway mark the bagel flavor is joined by some tastiness. I’m still able to identify the bagel separate from the toast flavors, but just a bit less focus and I’d be writing “toasted bagel” instead. It’s also got the familiar earthiness, wet leaves and black pepper. Retrohales have earthiness, leather, mineral flavors and maple syrup. The finish is again a bit fruity with some raspberry and orange before the bagel comes back in. The draw is slightly open on all three samples, but it doesn’t cause any issues for the most part. One sample does need a touch-up in the second third due to declining smoke production. The final third of the Viaje Farmhand Andre has some more generic bread notes, though the bagels are still there. It’s joined by paprika and some more of that wet leaves flavor. Retrohaling reminds me of a well-done toasted bagel along with something that reminds me of an herbal marijuana flavor and a ton of pepper. The finish has bread along with the lingering paprika. I’m still tasting a lot of black pepper, but that seems to just be the built-up amounts of black pepper and not any new black pepper flavors.

The three Viaje Farmhand Andres I smoked provided a different experience, even if the flavors were relatively the same. One was notably milder and played out slightly creamier, that version I preferred a bit more than the other two. Burn issues were the real detractors, but overall this is a good cigar. It’s not the typical Viaje; even in its strongest form it’s a bit more restrained than most of Farkas’ cigars, but there’s no mistaking the AGANORSA tobacco. Viaje releases a lot of cigars in a given year and I don’t smoke most of them, but I’d gladly smoke the Farmhand Andre again.