Graduate isn’t a word that gets used a lot around Thanksgiving, yet that’s exactly the word that was used to describe this year’s release of the Viaje Stuffed Turkey. It was a term used by Andre Farkas at the 2014 IPCPR Convention & Trade Show, and when the announcement was made that the line would return for 2014, a company spokesman repeated that the Stuffed Turkey was the first cigar to “graduate” from Viaje’s White Label Project (WLP) series into a line that would become a regular—albeit annual—release, complete with its own unique band and packaging.

The Stuffed Turkey line debuted in Nov. 2011 as a WLP release after a conversation with Jerry Cruz and Brian Hewitt of Stogie Review as a way to build upon Viaje’s seasonal and holiday-themed releases. In 2012, the company added a second version that used a maduro wrapper, and the two cigars became known as Stuffed Turkey White Meat and Stuffed Turkey Dark Meat, respectively.

For this year’s release, both versions return in the same 5 x 58 vitola as last year’s, a slightly smaller size than the 60 ring gauge that the line started out with and used in 2012. Retailers began receiving them in mid-November, just about two weeks ahead of the Thanksgiving holiday, a bit less time than they had last year but a much better release date than 2012s, which came out after all the turkey leftovers had been consumed and closer to Christmas. In addition to the Stuffed Turkey line graduating out of the WLP line this year, Viaje added a third Thanksgiving release, a 7 x 52 box-pressed Churchill called Farmer Bill Hatchet. The inaugural cigar is called the Handle, and all indications suggest that it will be an annual release, though as with all things Viaje, only time will tell if there are new vitolas made. Between the name of the cigar and the band, I find myself wanting to describe the color of the wrapper leaf as being a little bit like oven roasted turkey skin, but that might be a stretch. It’s a medium hue of brown with small veins and little to any oil on the wrapper, looking very cleanly rolled and without any visual issues. That is except for the band, of course. I like it, but I have talked to several folks who don’t, and about an equal number that find that it works; more on that below. The cigar is firm from head to toe and shows little give, though air has plenty of space to move as there’s not much resistance on the cold draw, which offers a fairly neutral profile but with a cool and slightly sweet note in the background. The pre-light aroma offers a fragrant wood note that has suggestions of apricot and peach; a forward and bright combination in the nose with no detectable spice or pepper.

Out of the gate the Stuffed Turkey produces a plentiful amount of white smoke that is sweet and tangy, an enhanced version of what the pre-light aroma offered in the nose. It’s in the medium range in terms of intensity on the tongue, and after a few puffs the nose gets a bit of white pepper that adds noticeable tingle to retrohales. Much like I’ve experienced with other Stuffed Turkey releases, the burn rate is quicker than you might expect from a cigar of this size, but it doesn’t adversely impact the ash as it holds on well for almost two inches—basically to the point where I become too nervous to let it go any further. There’s a slight turn in the flavor as a very subtle note of chalk comes in and further develops both the flavor and mouth feel of the smoke, but pepper remains largely absent from the tongue. Other than the slightly loose draw, the White Meat performs flawlessly in the first third, and so far ranks among one of the better burning Viajes I have had in recent memory. In terms of pepper, it is two different experiences between the nose and tongue with the Stuffed Turkey White Meat. If you’re not retrohaling, you are likely going to miss out on what pepper the cigar offers, as I have simply gotten none on my tongue through the first half. This isn’t a bad thing, mind you, as the flavors are plenty enjoyable and begin to add a slightly more pronounced lumberyard wood note, just that it takes both smell and taste to pick up on all the cigar delivers. It seems like there is a touch of char and pepper starting to arrive on the palate with the final third approaching, though it’s a hint at best. Construction remains perfect with an even burn, great ash and plenty of smoke. 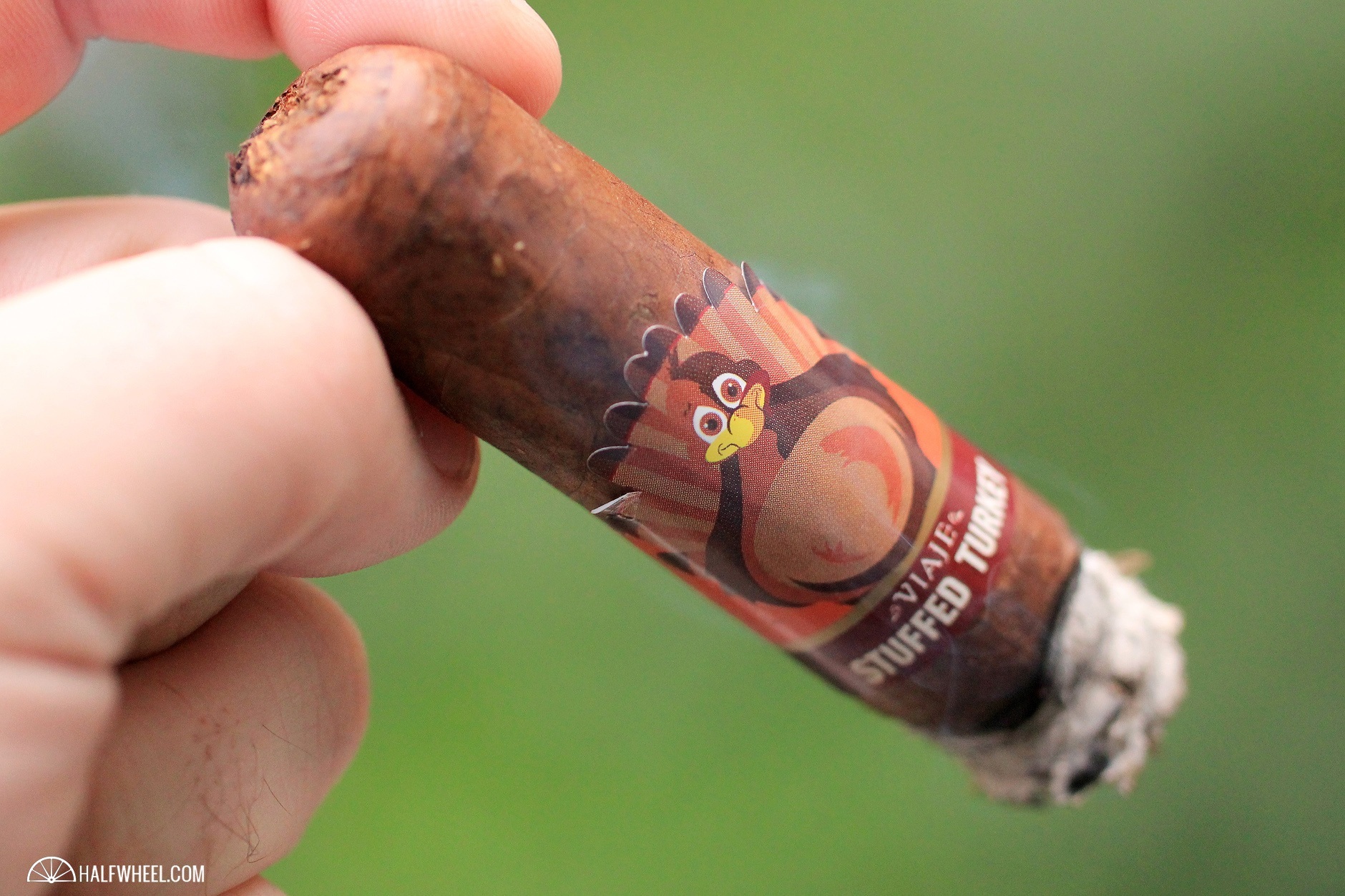 As alluded to a few puffs earlier, the wood notes pick up a charred note that skews toward earthiness at times, a definitive progression in the flavor but one that I can’t say is completely for the better, as it leaves a slightly funky taste in the mouth. There’s also a slightly sour note that comes out in one of the cigars in place of the char, a different but equally unappealing flavor. Both bumps in the flavor road disappear fairly quickly, clearing the way for the pepper to step forward in earnest, giving both the tongue and palate a more definitive black pepper note that when it stands out is pretty enjoyable, though in certain puffs it is a bit muffled by the rest of what the White Meat is offering. The final third progresses just as quickly and flawlessly as the previous two, and as the cigar burns down the eyes get more of the peppery smoke, creating a full face effect full of tingle. Each of the samples are able to be burned down pretty much as far as I wanted with no adverse effects, just requiring a bit slower puffing rate to keep the temperature of the smoke moderate enough to handle. The nicotine kick is about as minimal as you’ll find in a cigar of this caliber, and after one I’m ready to light up another. The more I thought about this year's Viaje Stuffed Turkey White Meat, the harder it was for me to find things that I didn’t like about it. While the char and brief sourness that came out in the final thirds weren’t terribly enjoyable, they weren’t enough to dampen my thoughts about the rest of the cigar, which was incredibly enjoyable. Yes, the draw was a bit loose and the ring gauge was too big, but even still, this is an incredibly flavorful and balanced cigar that burns beautifully and doesn’t rely on big hits of pepper to be memorable, two things I often found fault with Viaje cigars in the past. If you can still find these, I highly suggest picking up some.