Over its more than 13 years of releasing cigars, Viaje has released a near countless number of blends, sizes and backstories. Yet one thing was noticeably missing: a Connecticut-wrapped cigar.

What is generally considered a staple in any cigar company’s portfolio had seemingly never been used for a Viaje release, with the company focusing the majority of its attention on fuller bodied blends. But after 13 years, the time had seemingly come for a Connecticut release.

That cigar, the Viaje WLP Match, was released in June 2020 becoming what is believed to be the first Viaje to use a Connecticut shade wrapper, though the country of origin was not disclosed. The tobacco under that wrapper came from Nicaragua and AGANORSA’s growing operations. It was made as a retailer exclusive for Match, the cigar bar that is affiliated with Riverside Cigar Shop in Jeffersonville, Ind. The following month, Viaje began shipping a pair of new cigars under the name Viaje Black and White, with two distinct versions, the Black and White Connecticut and Black and White Maduro. As has been the company’s protocol, little was said about the cigars’ details, though they are 6 3/4 x 52 figurados that come in canisters of 24 cigars, with each cigar priced at $14, before taxes. The cigars get their name from the cookie of the same name that features chocolate on one side and vanilla on the other. As such they come banded with a soldi black or white band with the Viaje wordmark embossed, and in what feels like a dressed up poster tube in either a light black or an off-white, both with the Viaje logo featured prominently. 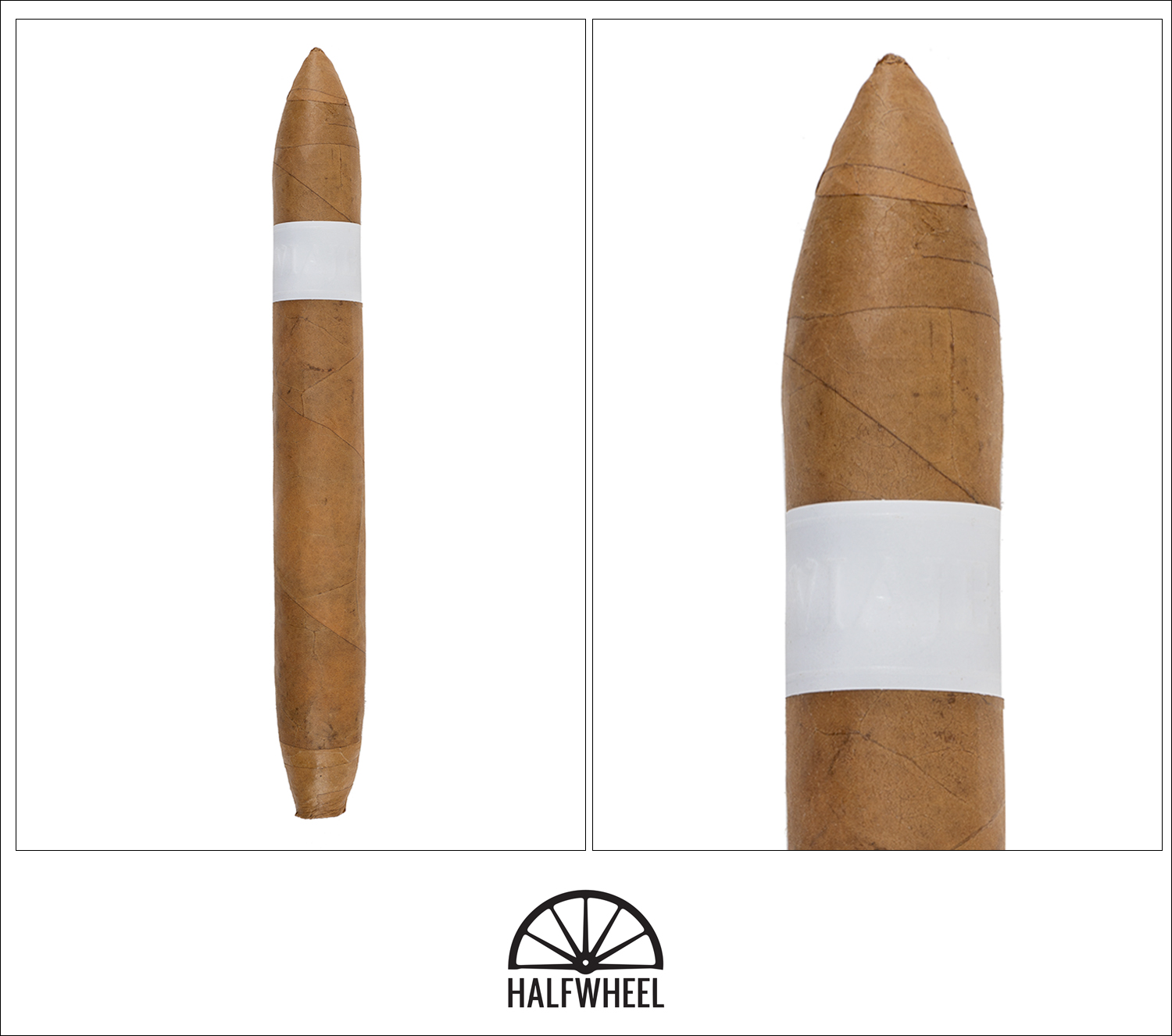 The Viaje Black and White Connecticut is one of the more interesting cigars I have seen in a bit, and not because of the Viaje band on a lightly tanned cover leaf. That leaf is a muted, lightly tanned shade and it  feels quite thin, and as I look at one sample, it seems like the small network of veins could end up being the site of splits if the center gets too hot or the ambient conditions too unfavorable. In terms of the roll quality, the cigar looks and feels very good, with the leaf’s color showing off some of the more intricate construction details at the ends of the cigar. The foot offers a bit of corn flakes, butter and an occasional sprinkle of white pepper. The cold draw is smooth and sweeter, with more of a Frosted Flakes flavor than plain corn flakes, though there is still some butter in the equation. What pepper is there is minimal, at best.

The Viaje Black and White Connecticut starts as one might expect for a lighter cigar, fairly mild and with a bit of creaminess, some light white breads and a bit of white pepper. Yet it is a much tamer start than most other Viaje releases—though again—given the wrapper, it should be readily apparent this isn’t most other Viaje releases. Certain samples try to be a bit more forthcoming with the white pepper, seemingly in hopes of making a bigger first impression, with diminishing returns the bigger it gets for my palate. While it’s by no means off-putting or bad, it does seem to take away from what could be a Connecticut-focused blend. As the cigar progresses, there’s a bit of cereal grain, including the Cheerios note I tend to find fairly often, likely because it’s a flavor I seem have firmly implanted in my head. Overall, the first third is enjoyable if sometimes not fully embracing of the Connecticut wrapper, with a mild-plus to medium profile depending on the sample, a medium body to the smoke, and a medium-minus level of strength. Other than a slightly fragile wrapper, technical performance is very good with no issues with the draw, burn or smoke production.

The start of the second third brings about a bit more white pepper, a subtle addition to the profile that is felt more through the nose on retrohales, but there is some additional tingle on the palate as well. If this were billed as another entrant in the  “not your grandfather’s Connecticut” category, it would be most noticeable here, as there is some dry wood on the palate and hints at a more Nicaraguan criollo profile. It’s a profile change that in two of the three cigars has me almost forgetting about the blend and wrapper, as it seems to have departed from most of the typical notes that come with Connecticut-wrapped cigars. Flavor intensity and strength are also starting to pick up in two cigars, with the third staying relatively mild. There’s a bit more light lumber coming out in the final puffs of this portion, joining a dry earthiness as well to further shift the profile into something I would put more in line with Viaje’s other offerings. It’s nowhere near as heavy of a profile, but the similarities are there. Strength is medium and slowly nudging up the scale, while body remains more squarely in the medium range. The technical performance is quite good, with no problems with the draw, burn or smoke production. The final third starts with the body of the cigar picking up just a bit more. The flavor gets a touch more buttery, mellowing out just a touch, staying mild in one sample and medium in the other two. A slight twinge of bite comes along and goes after the tip of the tongue in that milder sample; it’s hard to call it metallic, though that’s the first thing that comes to mind, but it is certainly focused in what taste buds it seems to be after. Thankfully, it is not long lasting, and the cigar gets back to its core flavors, albeit a bit toastier than earlier and now with just a bit of very light peanut flavor joining the mix. Even with the different journeys to the point where the band needs to come off, the profiles merge and begin the final inch or so with a noticeable mix of white and black pepper, dry woodiness, and a light and dry earth note making up the bulk of the flavors. Sweetness and the butter note from earlier are gone, and were I to take a puff at this point without knowing what I was smoking, I’m not sure that a Connecticut wrapper is part of the blend. If anything, I could make the case for a low-priming Ecuadorian habano leaf, so if that is more your profile, this could find some resonance with your palate. There is a bit more nicotine here, and it seems to ramp up quickly in an attempt to give the system the forthright punch it could be seen as lacking. The Viaje Black and White Connecticut closes out at a vibrant medium in flavor, medium body and generally medium-plus in strength, while the draw, burn and smoke production are all very good and problem-free. 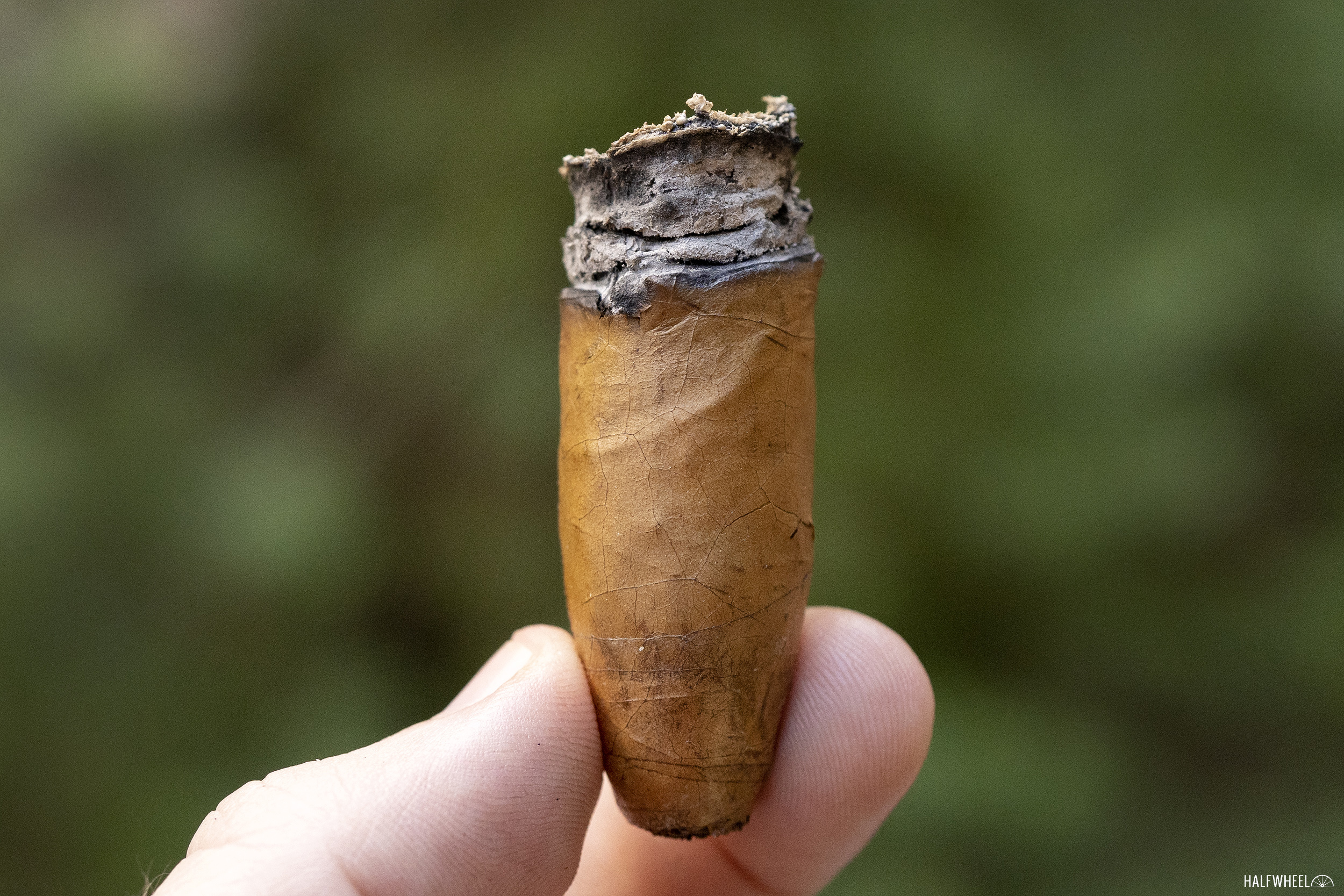 The Viaje Black and White Connecticut starts off with seemingly all intentions of delivering a different profile than most Viaje releases, dabbling in the lighter, milder flavors associated with Connecticut, but ultimately the blend seems called back to the brand's roots of offering fuller cigars. By the midway point, the notions of this being a Connecticut-forward blend are almost completely dashed, leaving me wondering just what I would think this was if I didn't know anything about it. That said, it is enjoyable if not revolutionary, and I must once again advise some caution with the wrapper due to its fragility. But were I to see one at a shop, I can't say I'd pass it over, if nothing less simply to see how the Viaje portfolio continues to evolve and grow.