Chatter about the Veritas 412 started hitting the internet in early April as the company teased the cigar’s release via its social media channels, with the cigar formally launching at the 2014 IPCPR Convention & Trade Show in July. It will debut in a single vitola, a 6 x 54 toro, with a limited run made in the first year before becoming an ongoing production cigar in 2015, with production being handled by Tacasa S.A. in Estelí, Nicaragua.

The Veritas 412 gets its name from the area code of Pittsburgh, Penn., which holds a special meaning for Chris Weber, the vp and marketing director of Veritas Cigar Co. “Pittsburgh is my second home, my entire family is from there,” he told halfwheel. “My parents both met and married there, my mom’s father was Commander of the North Side for the Pittsburgh Police Dept., and my father’s father worked in the steel mills for US Steel. Pittsburgh made the steel that helped build this country and Black and Gold flows through my veins and as such I wanted to pay tribute to that on the band.”

This is the second time that Veritas has included Pittsburgh in its designs, as the company’s Torch line includes the city skyline on the band. That cigar, which comes in three versions—Connecticut, Habano and Maduro—was launched at the 2013 trade show.

Additionally, the 412 name is apt for this project because the cigar uses a Pennsylvania broadleaf maduro wrapper, as well as Pennsylvania tobacco in the filler. 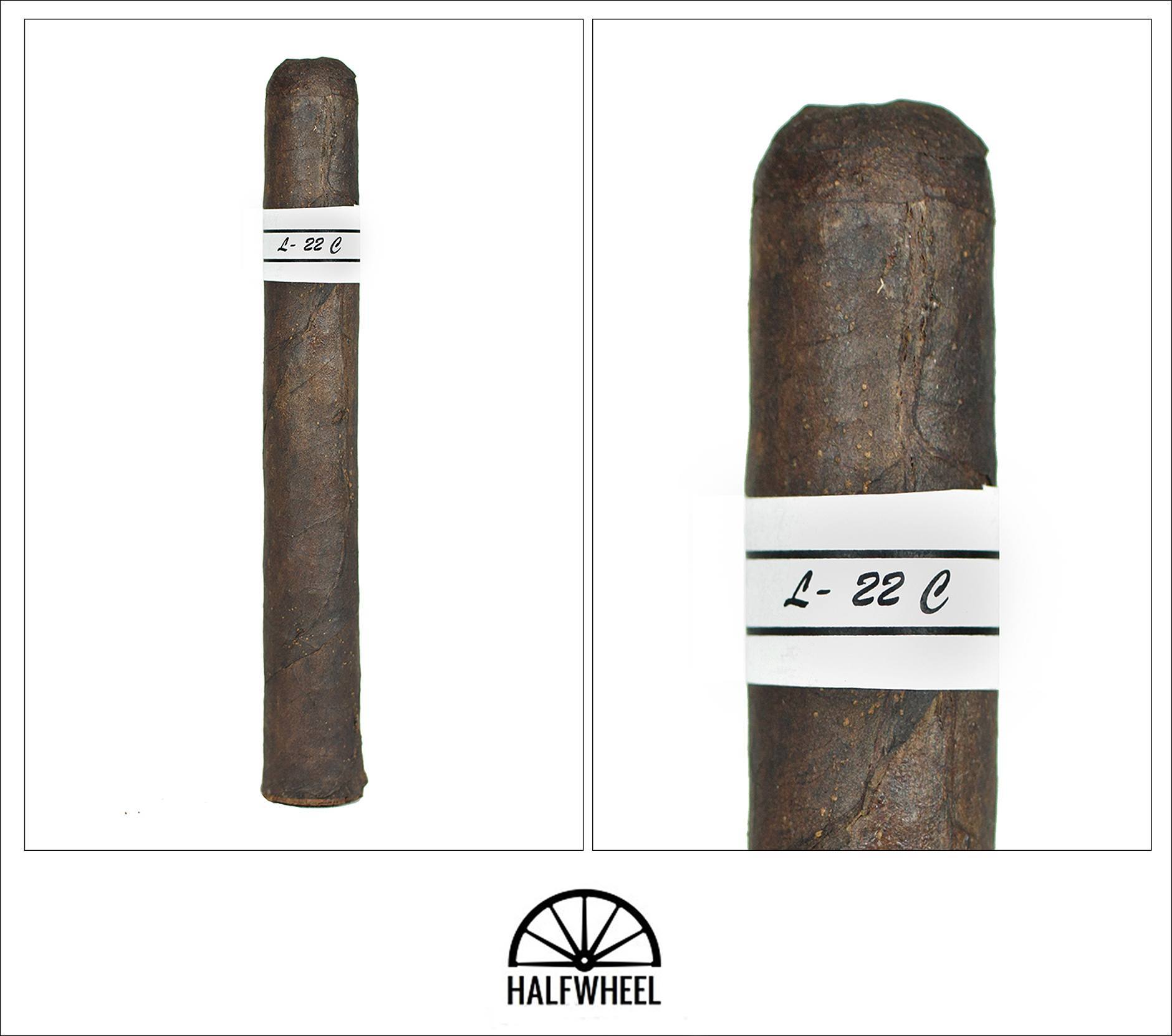 The Veritas 412 has a dark brown wrapper leaf with a bit of tooth and not much in the way of oil. The two samples sent for this review offer very different appearances, as the first one—and the one in the photographs—has some fairly rough spots as far as both visual appeal and tactile sensation, while the second is much cleaner in terms of the wrapper leaf used and the overall roll quality. The cap on the first isn’t the cleanest I’ve ever seen, with a bit of a jagged cut and what looks like part of a vein showing, as well as what could be a stem trying to poke through, while the second cigar has as good of a cap as you would find in pretty much any humidor. The one thing that was consistent is the firmness, uniform from head to foot on both cigars with little give. There’s a subtle, almost muted sweetness coming off the foot from easy notes of warm strawberry jelly and wheat bread. It’s very neutral and doesn’t leap off the cigar, but very enjoyable all the same. Pepper isn’t a part of the cigar at this point, and it is just a touch prevalent on the cold draw. The wheat bread picks up a bit of a toasted character and the sweetness has stepped aside to make way for just a touch of pepper that tingles the lips and front of the tongue.

The first puffs of the Veritas 412 are a bit sneaky in that they don’t really offer much on first taste, but then that lip and tongue tingling pepper starts to do its thing and it shows a bit more character in the seconds after each puff. Initial flavors are a bit hard to pick out, with a wheat toast note starting to take on a bit more earth and pepper in the first half inch, and a very faint sweetness hanging out in the background. It’s when the first clump of ash breaks off at about an inch in length that the flavors seem to take their first noticeable step forward, as the earth note dries out a bit and the berry sweetness starts peeking through the strength. Retrohales are fairly agreeable with a touch of pepper, and the burn is even and sharp. 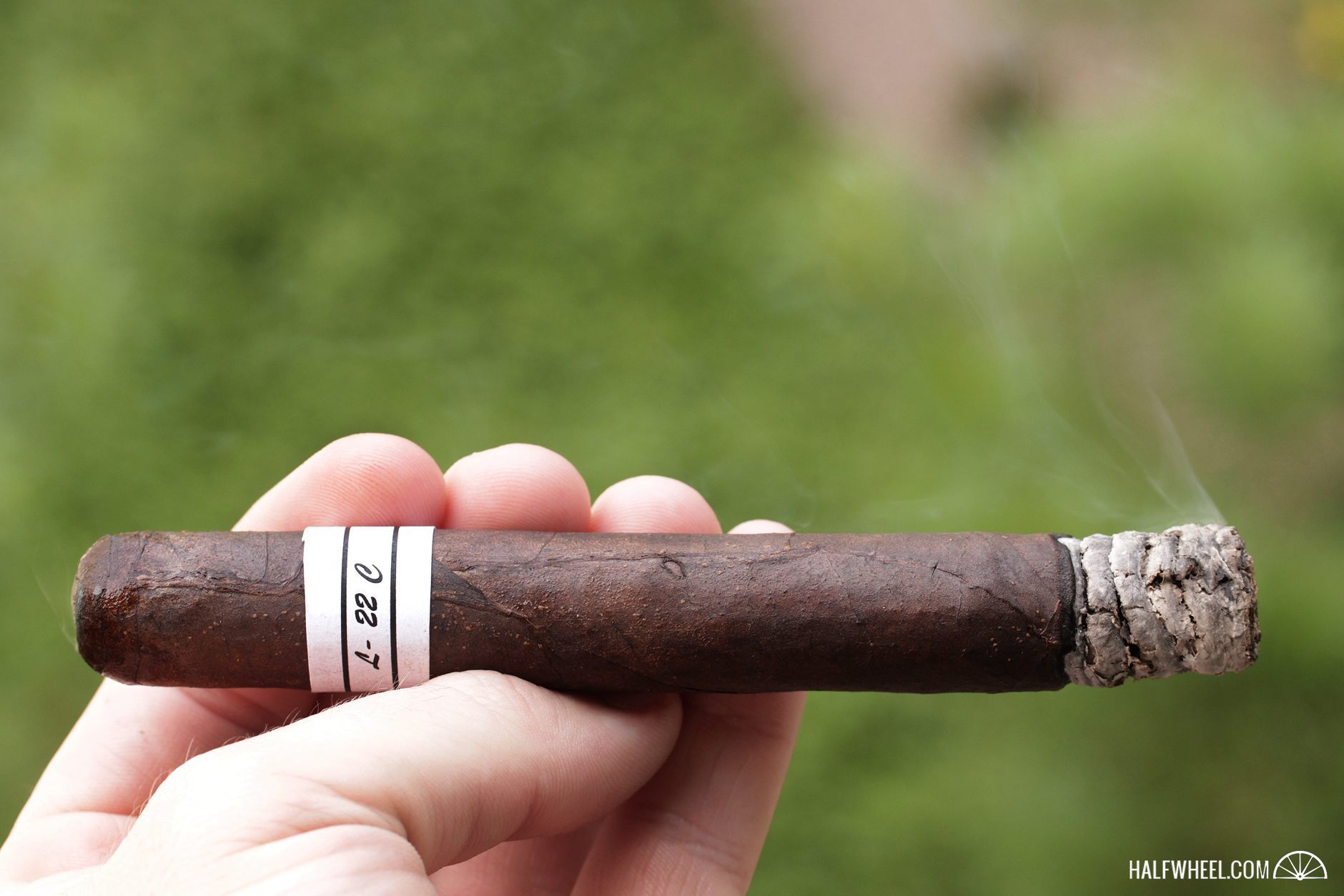 The second third brings an interesting duality to the Veritas 412–-at times the smoke seems to become lighter and more airy, while the flavors almost pick up more strength, or at least it leaves more of an impression on the taste buds. Good bits of concentrated earth continue to develop from the first third, and the wheat bread crust note continues to reappear at times to provide a brief intermission. The cigar’s aroma is enjoyable through the second third, not overly laden with pepper but still having enough character to stand out. There’s just a slight bit of sourness that is found near the midpoint in the first cigar, and thankfully it is a fleeting note. The smoke continues to develop a much lighter and airy quality, and past the midway point the flavor has lightened up as well, picking up notes of chalk for a few puffs before returning to its earthy roots. The Veritas 412 continues to perform well with a sharp and even burn line, adequate smoke production and a draw that is just the slightest bit firm. 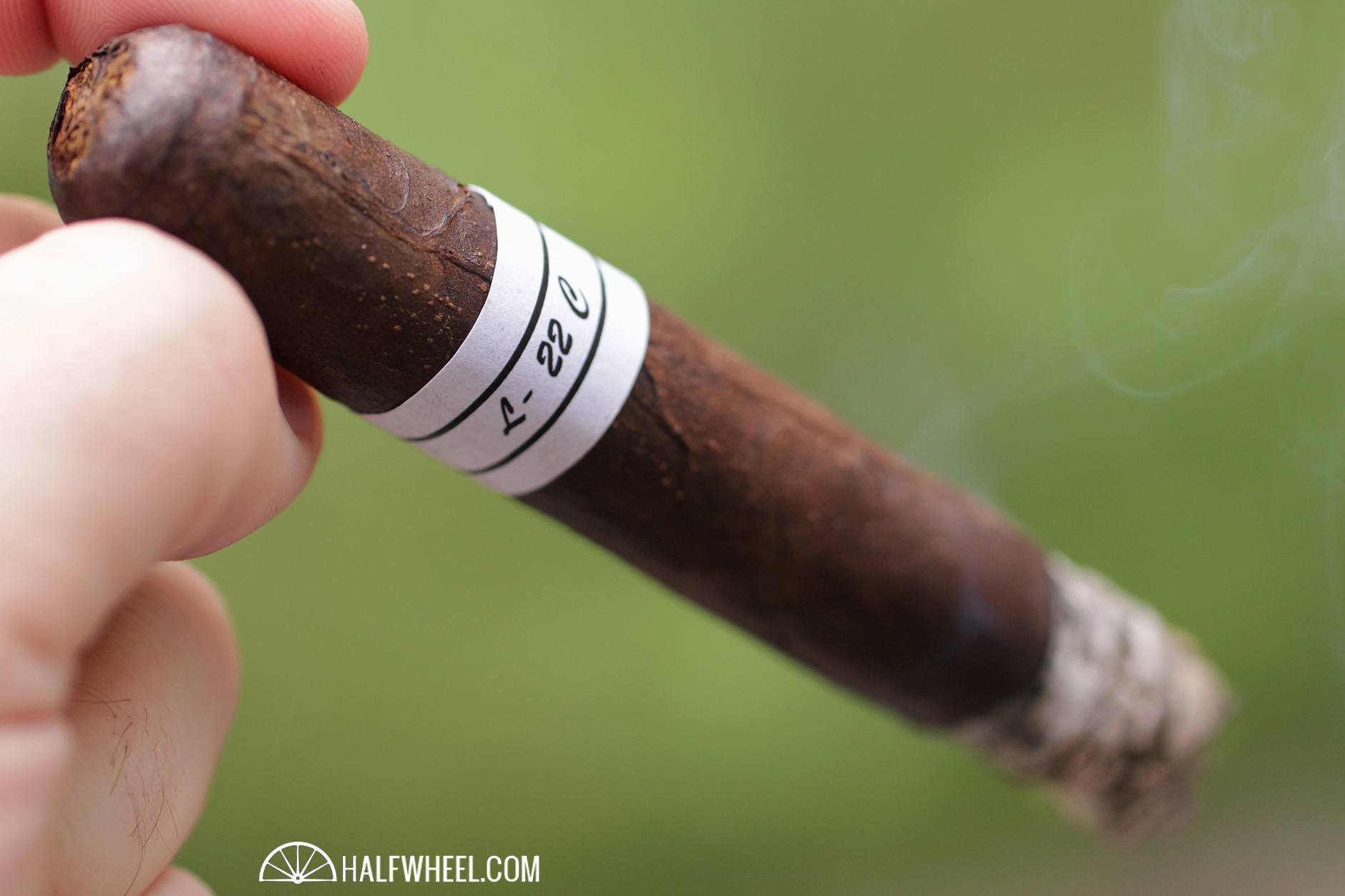 After starting with a continuation of the flavors found in the second third, there’s a sudden down shift at the band where the Veritas 412 kicks into a full-flavored profile with lots of dry earth, table pepper and a good bit more strength than what had been offered prior. The draw seems to tighten up a bit and makes each puff more labored than the last, with the flavor lingering on the tongue for increasing amounts of time as well. A touch of sourness returns in one cigar, which was enough to wrap that particular stick up a bit early. Burn and technical performance was solid from start to finish, with plenty of smoke and no need for a touch-up or relight during either cigar. 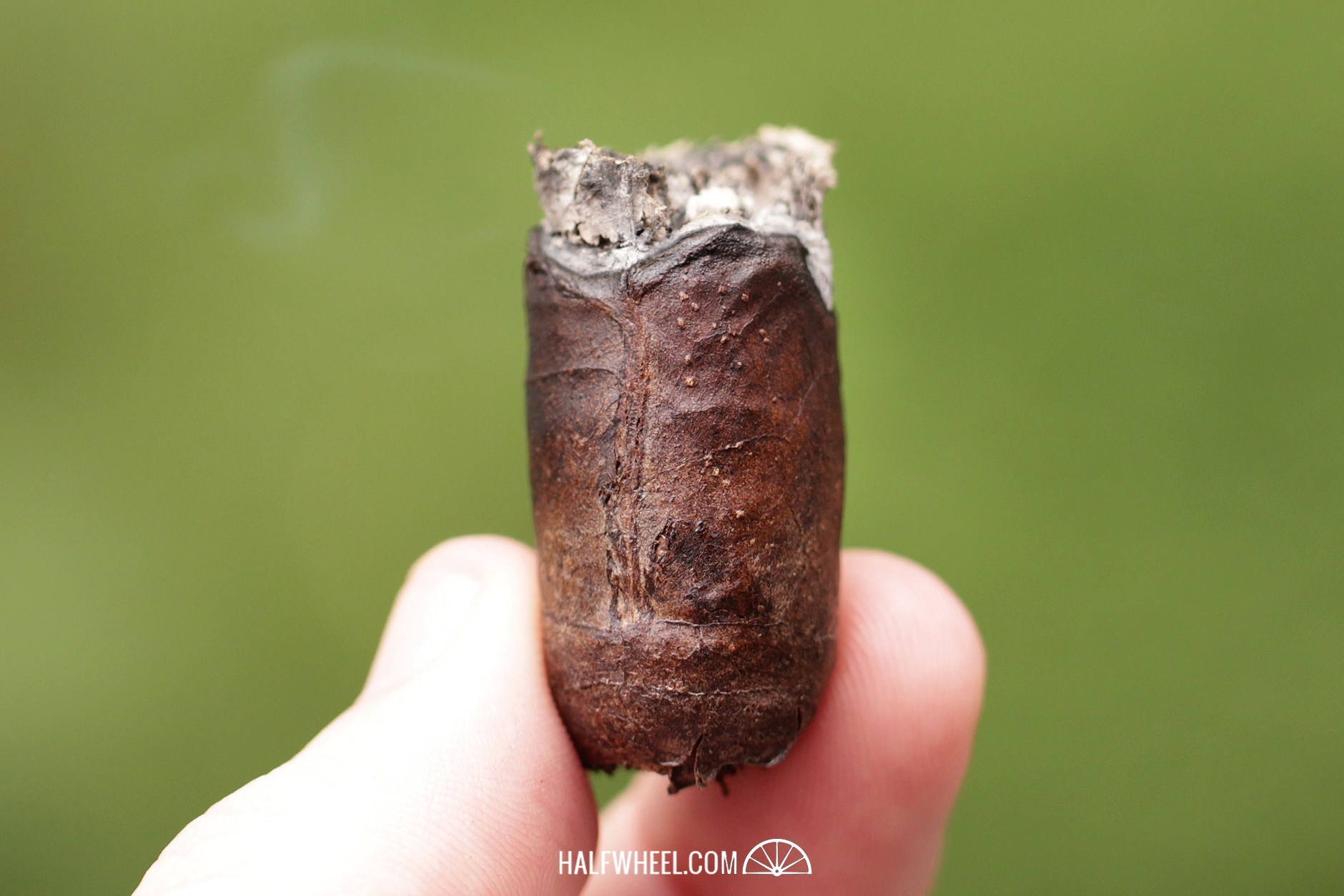 The Veritas 412 had me intrigued by the pre-light aroma and first third of both samples with a thick and subtle sweetness that seemed to linger in the background and was just waiting to jump out and enhance the wheat and earth notes that set up the framework for the rest of the cigar. That never happened, and the transitions that the cigars offered came across as too few and far between and were less than inspiring for my palate, with several tastes of earth dominating the majority of the cigars. There was never a development of complementing notes that would create a complex, multi-layered flavor, the primary reason that this cigar fell short of expectations. The touch of sourness that came through at the end of the second cigar I smoked left a less than favorable impression on my taste buds and finished off a cigar that had me looking for something completely different from it. If that's your preference, the Veritas 412 is an interesting option, though one I'm not sure I will be returning to in the foreseeable future.