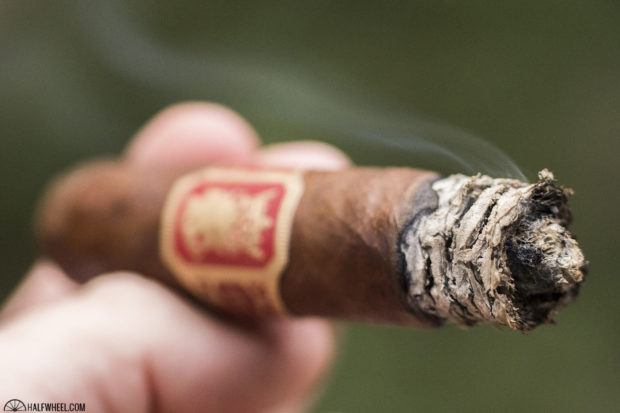 If one were to recap the cigar industry in the past year-and-a-half, there are a number of storylines a person could pick from. One of the more interesting ones in my mind was that of what we have come to refer to as phantom brands.

When the FDA set a deadline of Aug. 8, 2016 to have cigars “commercially available” without needing the agency’s pre-approval, it created a literal flood of new cigars showing up quietly and in extremely limited quantities as companies sought to rush out their upcoming releases. Sometimes the cigars would appear on shelves, in ever rarer cases on social media or message boards; almost always the company making it would defer comment as to the cigar’s specifics.

One such cigar that went from phantom brand to regular release is the third member of Drew Estate’s Undercrown line, the Undercrown Sun Grown.

First seen by writers of this site in January 2017 the Undercrown Sun Grown was one of many cigars the company shipped ahead of the deadline, a list that includes Liga Privada Aniversario, Tapas Finas, and Drew Seconds bundles.

Unlike those other cigars, the Undercrown Sun Grown has actually been formally released.

The Undercrown line debuted in 2011 as an offshoot to Liga Privada, with the story going that the rollers were smoking too many of the company’s flagship cigar, so a new line came about to satisfy their demands and that would be a much more readily available addition to the company’s lines, as Liga Privada was in high demand at retail.

As Jonathan Drew told Stogie Review at the cigar’s launch:

Think of it essentially as the inverse of Liga Privada, when you think of Liga Privada you think of visos, secos, ligeros from different farms, in the old days we could take a little viso for this farm, a little seco from that farm and a little ligero from another farm. It’s not like that anymore, now we have to buy actually farm crop, we have to take the whole thing —seco, viso, ligero and even sometimes scrap. So what we’ve done with Undercrown essentially is we have inversed the fillers, so for instance if I am using a ligero from the ASP farm in Undercrown, we’re going to switch it from that Liga that we’re using on the ligero to a viso here from the same plant. If I’m using a viso from Nestor from a Honduran farm that I like, on this Undercrown product I’m going to use a ligero because I’m still buying that whole farm so I need to use all the tobacco.

In 2015, the line got its first extension, the Undercrown Shade, which swapped the blue bands for white, and a new blend of an Ecuadorian Connecticut wrapper, Sumatra binder and Dominican criollo 98 fillers along with Nicaraguan corojo and criollo. 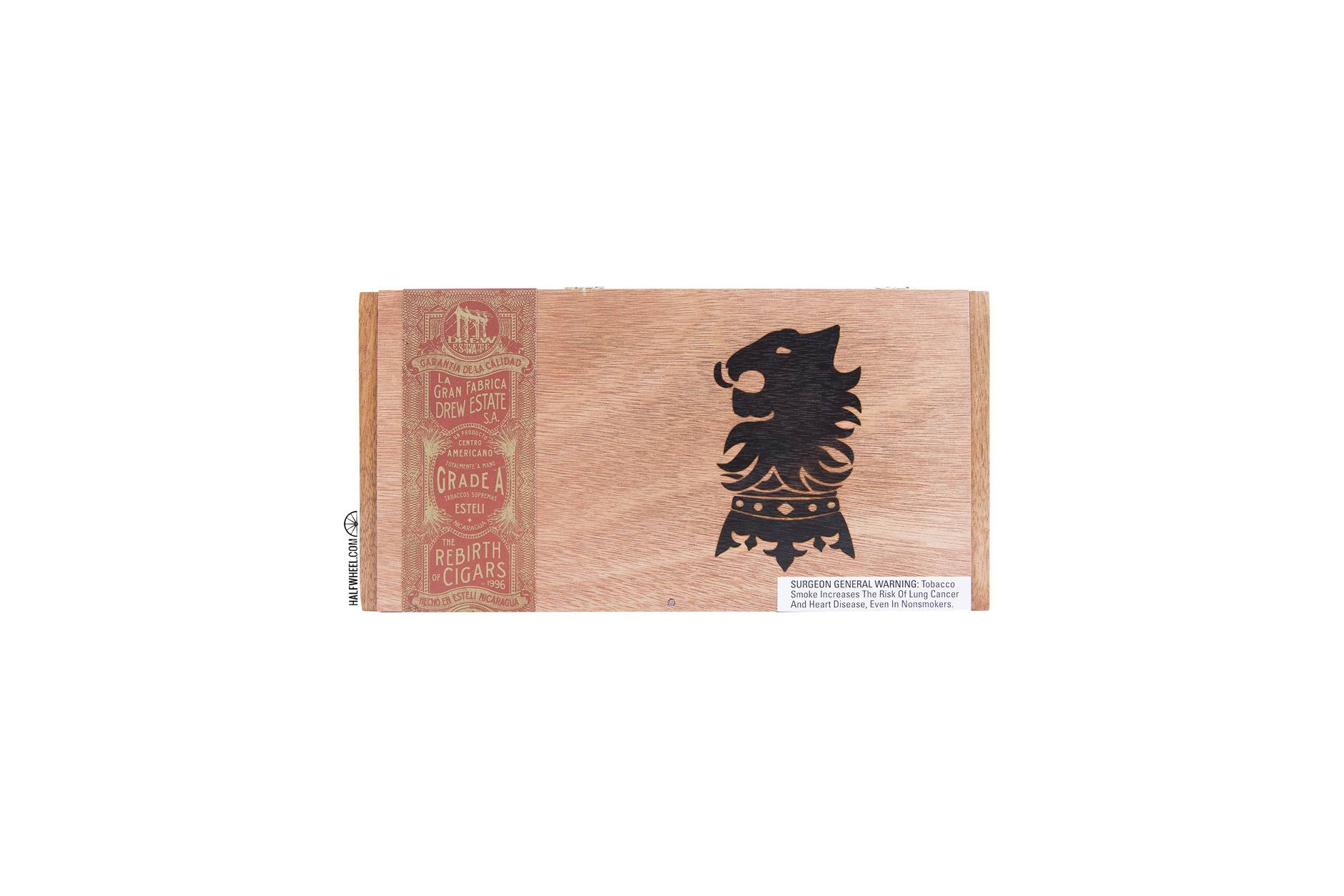 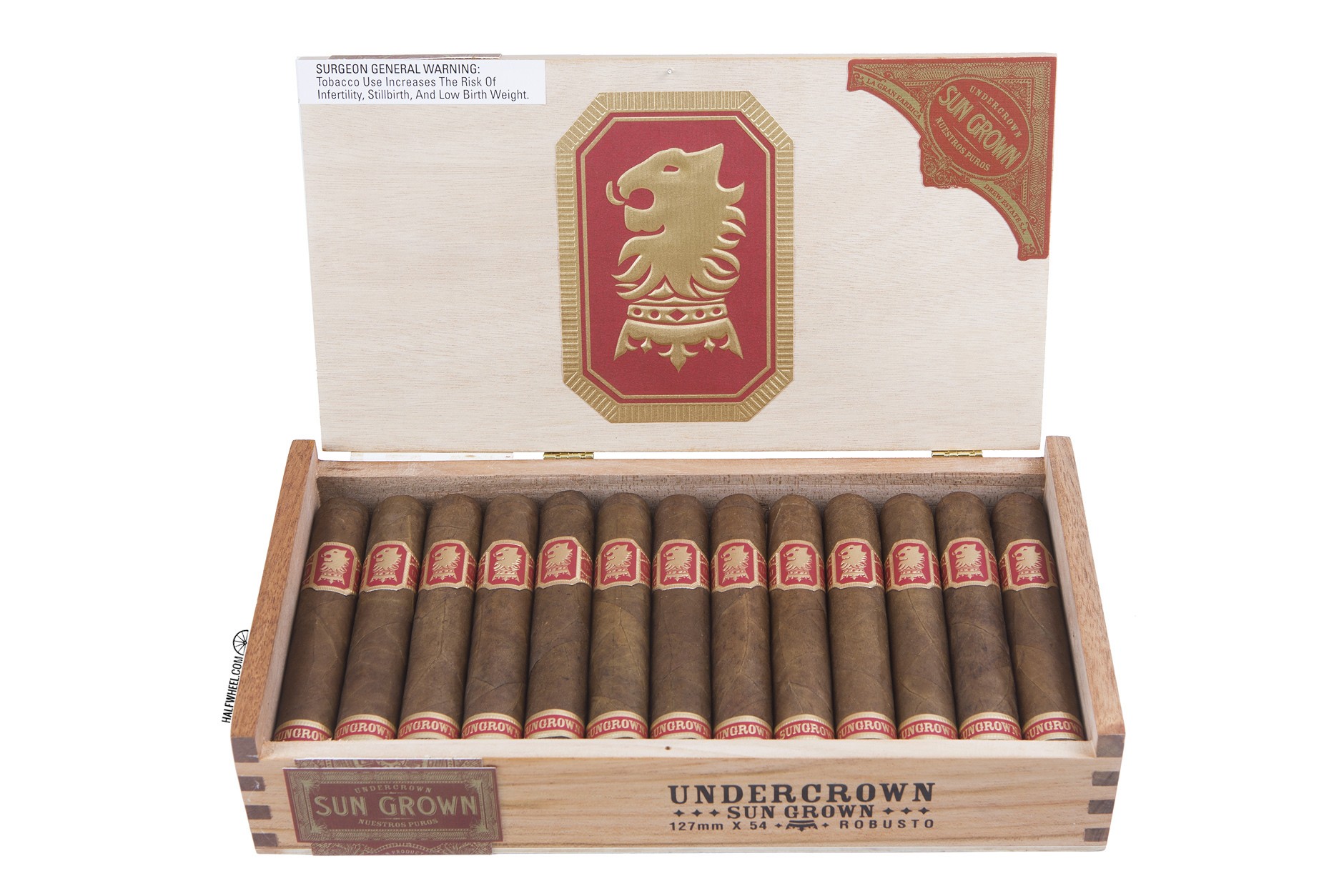 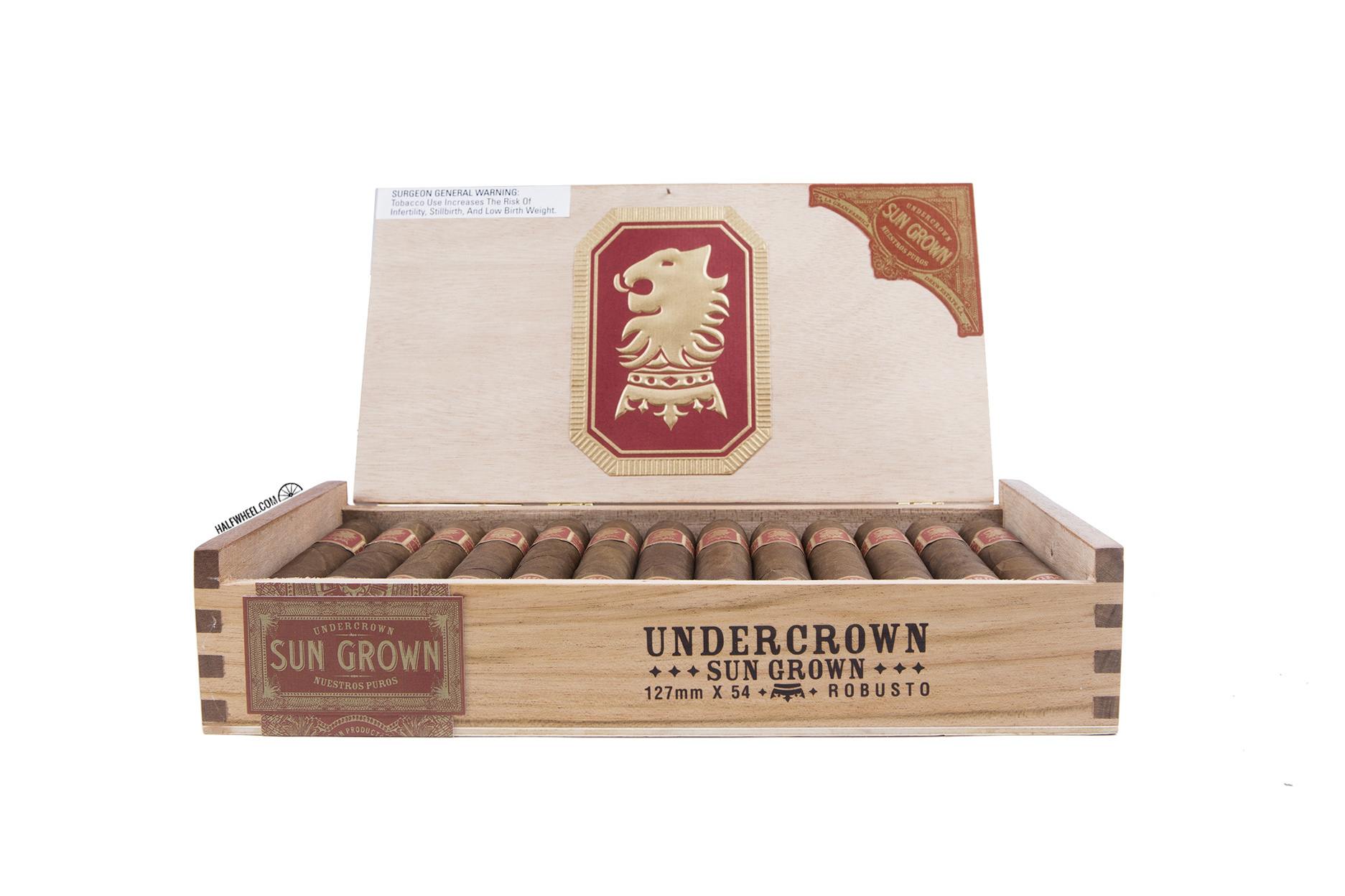 For the Undercrown Sun Grown, the company returned to some of the elements found in the original but selected a sun grown Ecuadorian Sumatra wrapper to sit on top of a Connecticut River Valley stalk cut and cured sun grown habano binder and fillers from Nicaragua, which includes a leaf of “extensively aged ligero” from the Nueva Segovia region of the country, which is located near the border with Honduras.

In a press release, Drew Estate said that this particular tobacco was added to enhance the strength of the blend. It gets its own look as well, as it comes dressed in bands of rich red and gold.

Additionally, Jonathan Drew said that the company has been working for 15 years to secure the Ecuadorian Sumatra wrapper used on this cigar.

The cigar is being offered in seven sizes that are very prevalent in Drew Estate’s portfolio, including the highly sought-after Flying Pig, which like the rest of the sizes is a regular production offering. 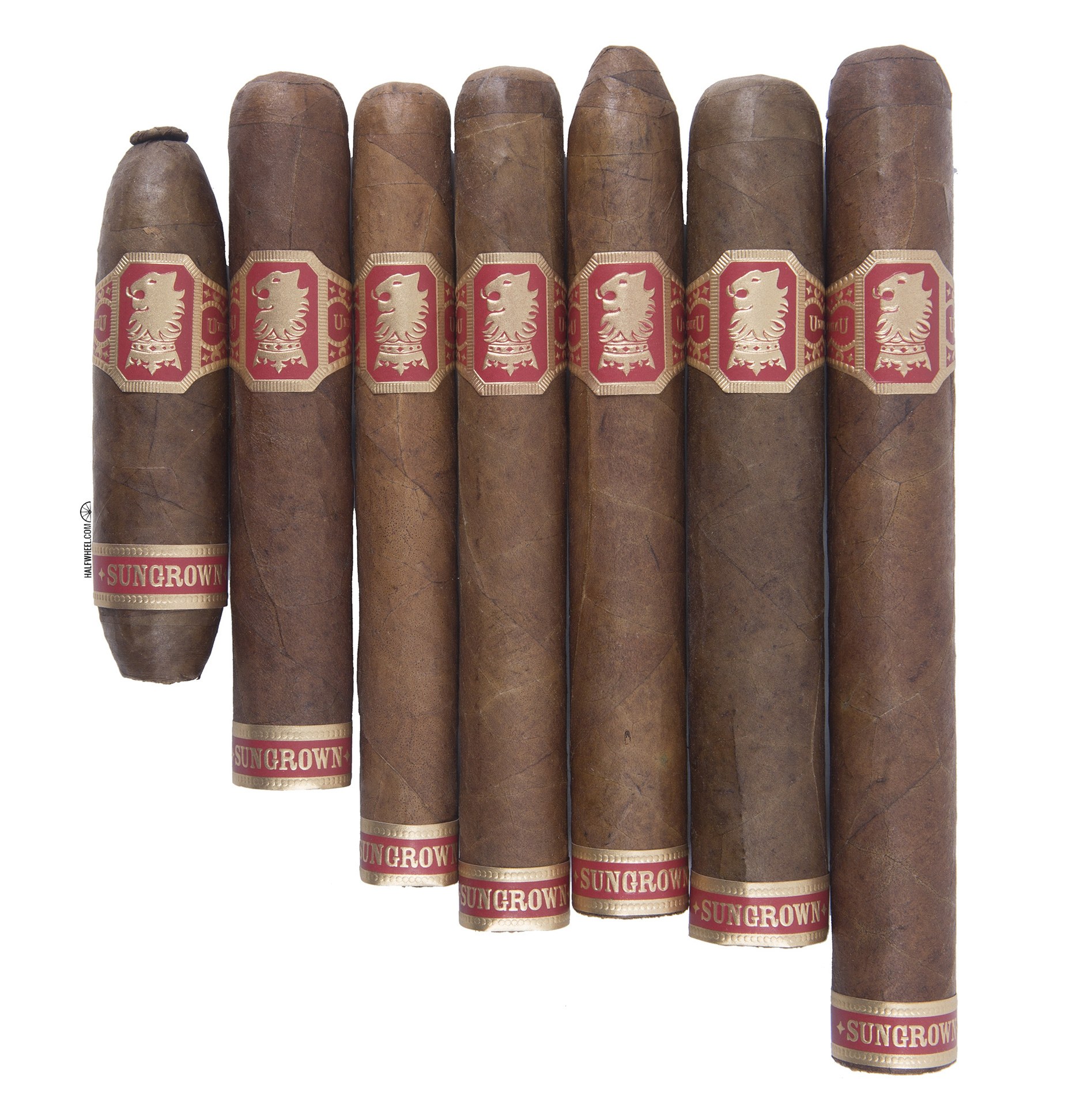 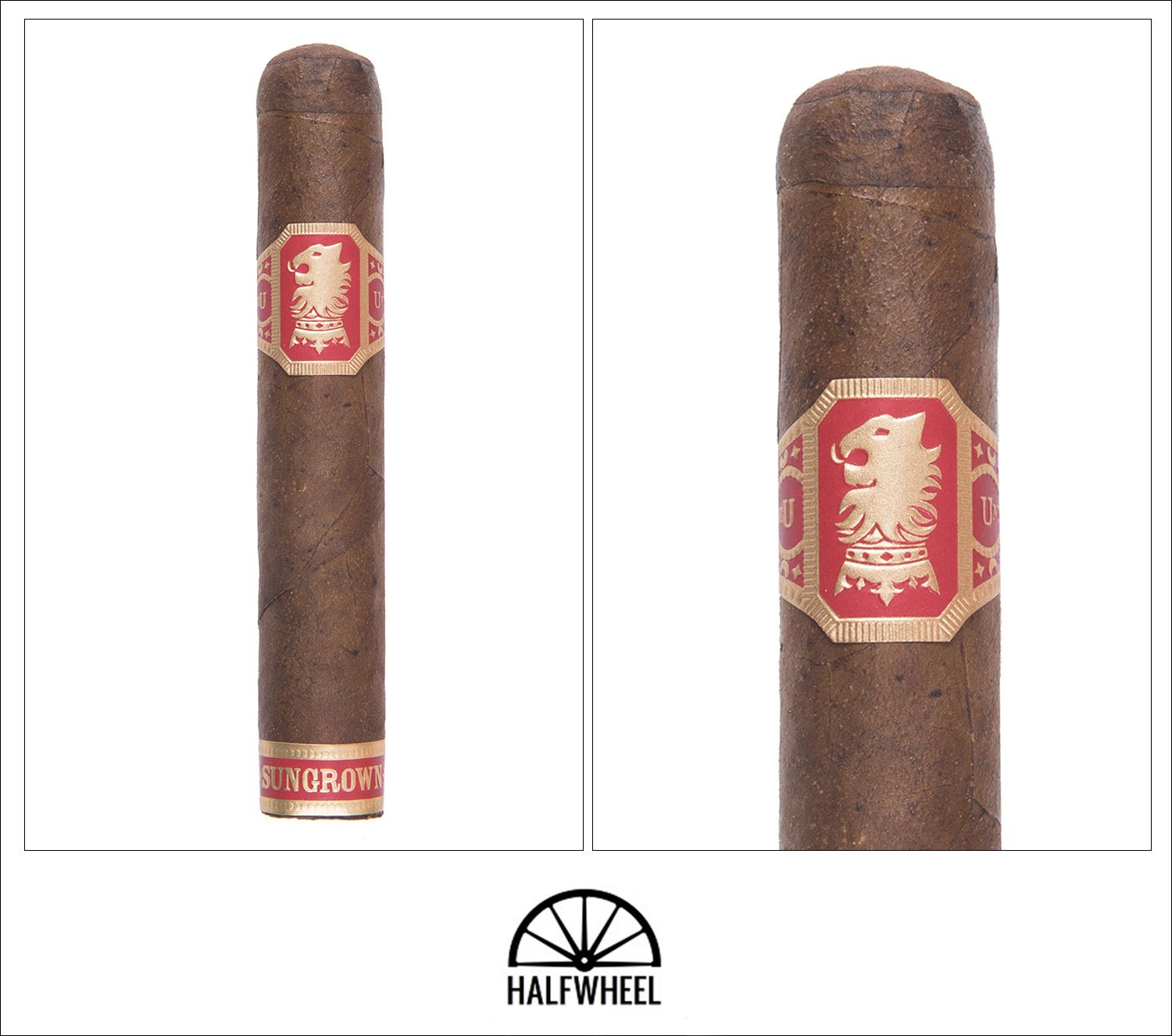 The Undercrown Sun Grown Robusto is a thick robusto that is wrapped in a reddish-brown leaf that has a decent vein structure, some tooth, and a faint oil sheen. it’s a fairly firm cigar, and while there are a few softer spots to be found among the three samples, there are also some nearly rock hard spots as well. Otherwise it’s generally rolled well, with flat seams and generally good caps, though one is noticeable subpar for a premium cigar, with a spot sticking up quite noticeably. From the foot I pick up a distinct jerky note, meaty and dried but still showing some residual moisture. There are also dried fruits, namely apple and mandarin, but it could pass for an assortment from the bulk section of my local market. The cold draw is smooth and easy with a fairly nondescript flavor, though among the samples there are notes of clay, salami, and heavy cream.

The Undercrown Sun Grown Robusto opens with the same clay note I found on the cold draw, though now brought to life by way of vibrant pepper that tingles almost the entire mouth, and a bit of minerals for some extra effect. The first puffs are a bit stronger, sharper, and off-putting than I’d prefer, though not enough to make me think the cigar is flawed. Given what the palate gets, I’m surprised the retrohale doesn’t deliver even more dynamic sensations, but it seems toned down just a tick or two, retaining all the same flavors but not quite as potent. There’s a bit of a retreat by the strength of the smoke after the burn line hits a half inch, and when the first clump of ash drops about an inch along, it’s a more balanced profile, with the strength of the flavor better matching up with its somewhat thin and cutting texture. It’s just a few puffs later that the flavor gains a bit more body as the two elements seek equilibrium and balance, and the missing base notes start to emerge to give the cigar some depth and base. There’s little to complain about from a technical perspective in the first third, other than the ash dropping off unexpectedly and possibly in an unfortunate spot. 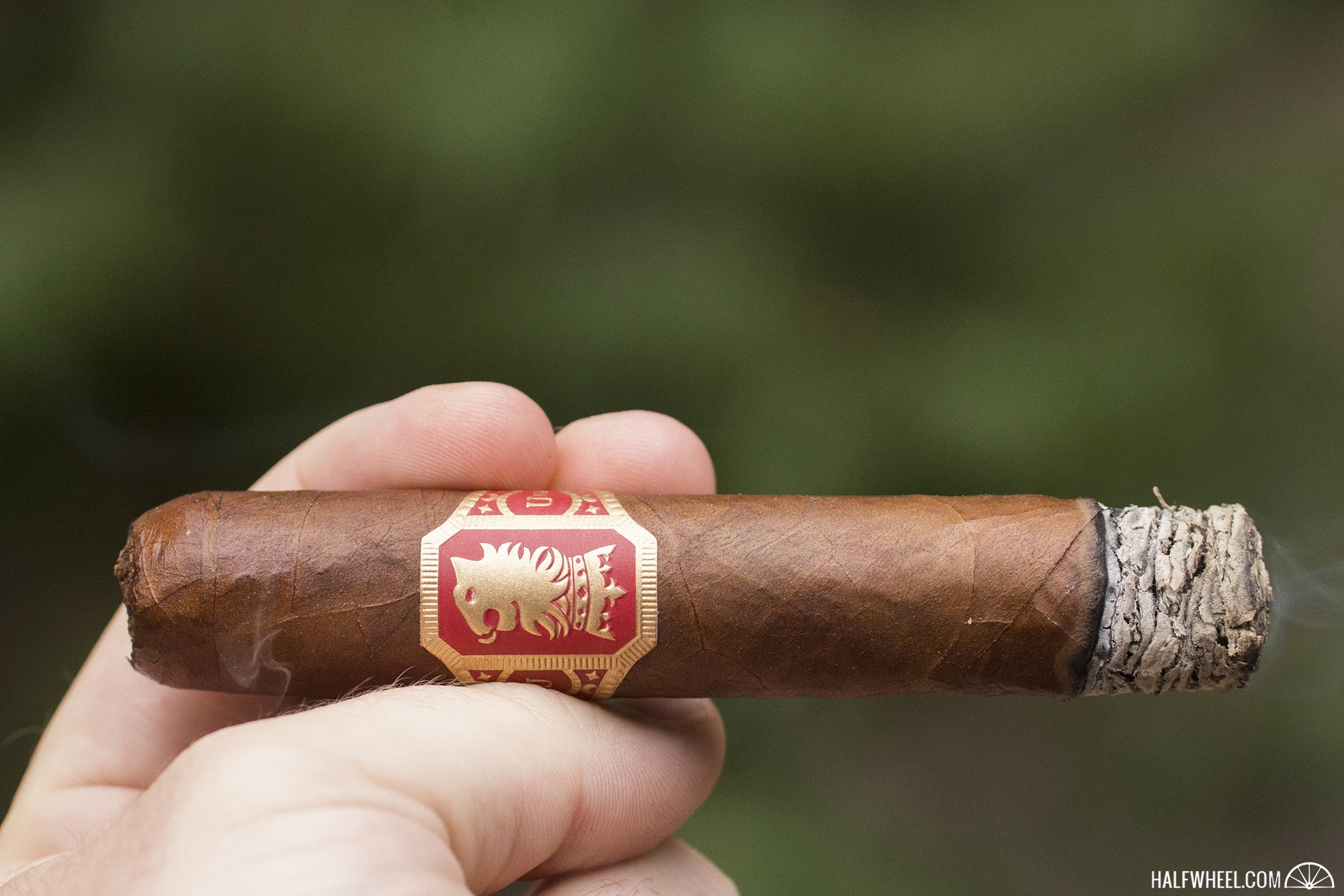 While I wouldn’t say the second third of the Undercrown Sun Grown Robusto begins in a lull, there’s nothing eventful to mark its beginning. The flavor evolves with the help of chalk, clay, and white pepper, a combination that is a bit sour and rough for a handful of puffs before smoothing out into a flavor reminiscent of where the cigar started, particularly as it brightens up and moves away from the fuller notes it had picked up in the first third. Through the midpoint, I find myself still struggling to reconcile the flavor and texture differences in the smoke, as the cigar seems to be in need of some filling out yet remains fairly enjoyable, save for a handful of spots that are a bit out of balance due to the chalk, minerals, and pepper not quite aligning as best as they could. Certain samples do a better job getting that core solidified, while others fall a bit short, and there’s no doubt the cigar is better when that core gets filled out. The third sample does the best job at this, adding a flavor of thick, cured meats around the halfway point. From there the cigar reunites with its sharper components, namely chalk and minerals, which adds some irritation to the back of the throat. The combustion remains quite good with plenty of smoke and an even burn line. 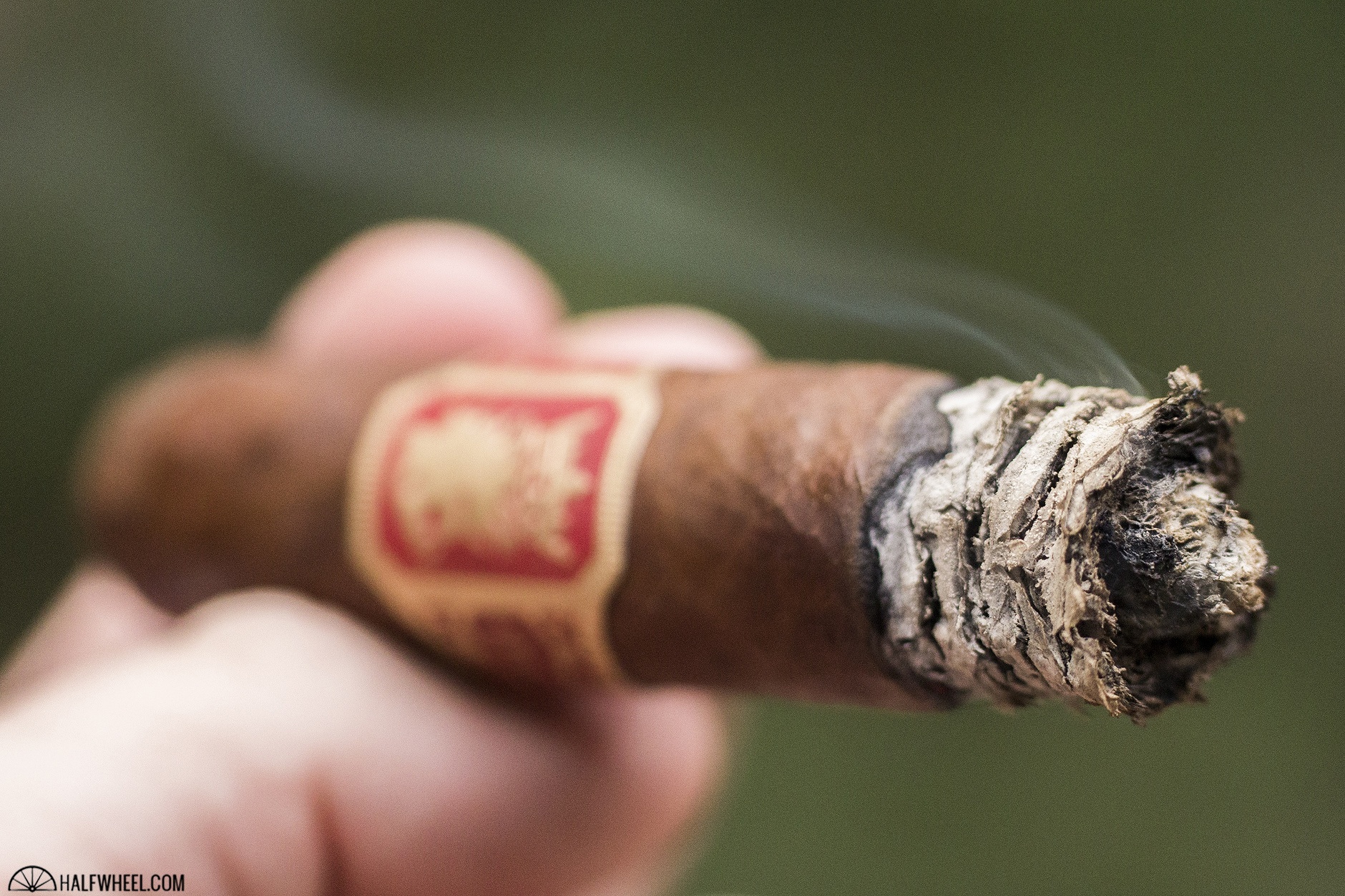 Entering the final third, the Undercrown Sun Grown Robusto shines when it locks in a medium-full body and flavor, and the rich, meaty core flavor gets accented by a sprinkling of pepper on the palate but a heaping helping through the nose. Much like the transition into the second third there isn’t a defining transition alert, and often times it’s well into the final third that I take note of where the burn line has reached. The cigar gets a bit rougher when the burn line passes where the band would sit, as the pepper gets more gruff and the profile a bit heavy-handed with earth, though it’s also where I get a bit of sweet cream through the nose when it’s not overpowered by black pepper. A bit of cedar and campfire joins the profile, adding complexity but also a bit of tangy wood bite that alternates between enjoyable and overly stimulating, especially when paired with the minerals that are back for another go. The parting puffs of the Undercrown Sun Grown Robusto hold on to the tongue-stinging taste until it’s time to put the cigar to rest in the ashtray. 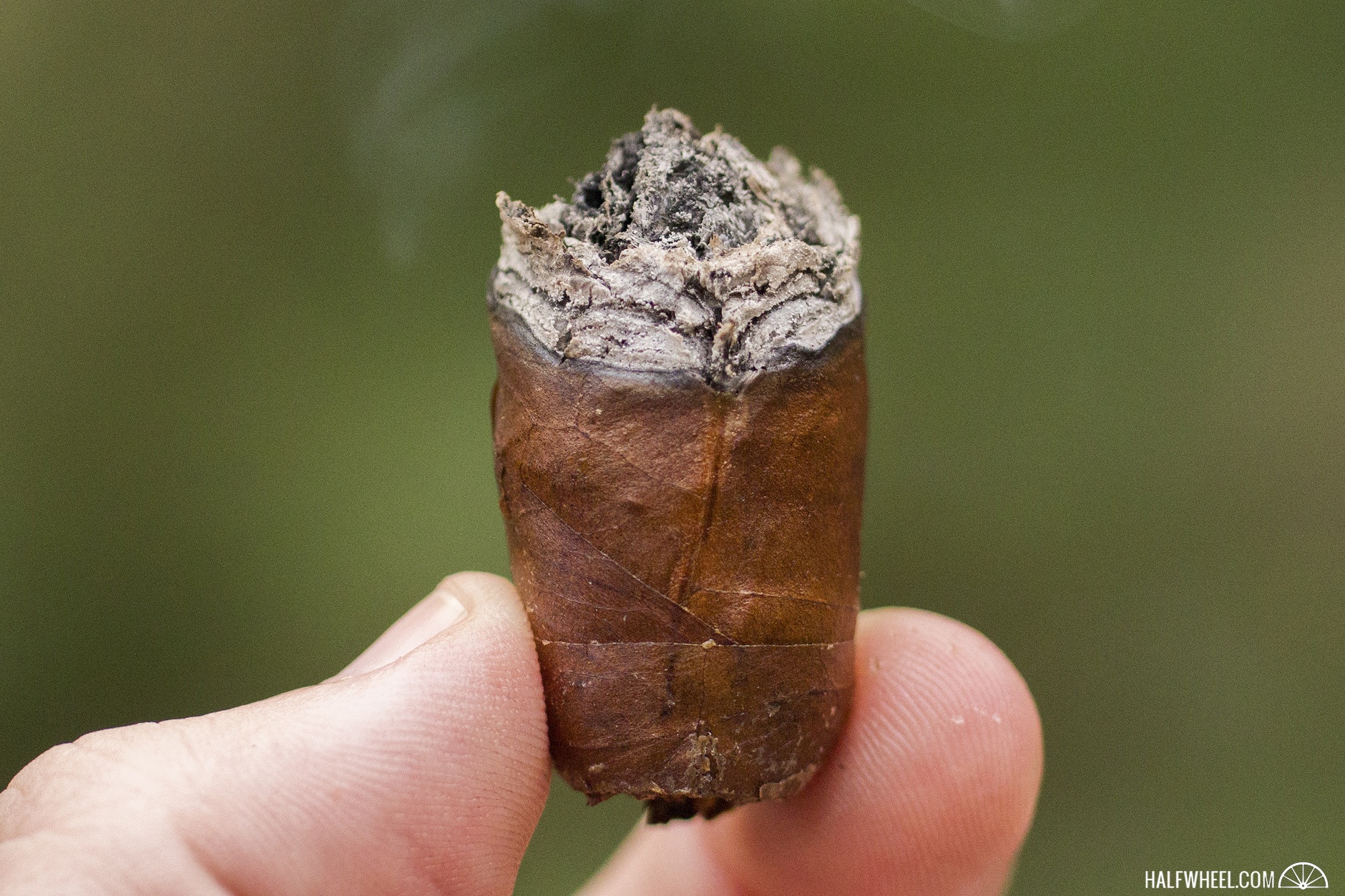 To say that I'm left a bit lacking by the Undercrown Sun Grown's profile would be about as fair of a statement as I can make, as there are a few spots where the blend is quite good but a few too many where I feel like it's missing much of what I look for in cigars and offers too much of what I don't. The mineral component is too prevalent for my liking and the incongruence between the texture of the smoke and its flavors is something I found consistently in the first and final thirds, leaving me wanting more from the cigar to fill out its base notes and not leaning so heavily on big, bright flavors. I certainly think this blend could work in other sizes and I'm intrigued to see if it does, but in this robusto format the pieces just don't align well enough on my palate to earn more than a half-hearted recommendation to try it.