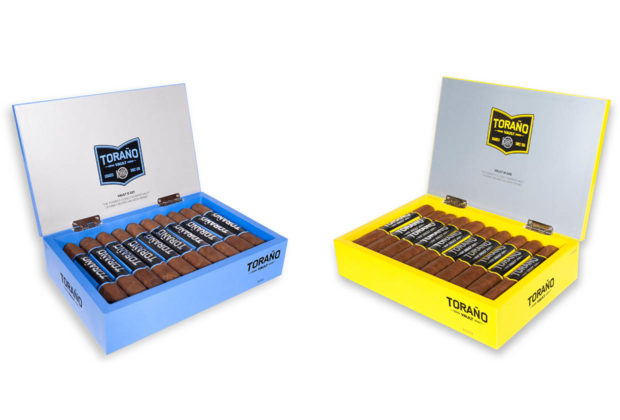 General Cigar Co. has announced the release of two more cigars from the Toraño family’s blend vault, the Vault E-021 and Vault W-009.

The E-021, which comes in a deep blue box, uses an Ecuadorian Sumatra wrapper with a Connecticut broadleaf binder and a blend of filler tobaccos from the Jamastran valley of Honduras, the Estelí region of Nicaragua and a selection of Dominican Republic piloto cubano. It’s billed as a balance between medium body and full flavor and is available in two sizes, 4 x 50 ($5.49) and 5 x 52 ($5.99).

The W-009 is called the companion to the E-021 and uses a sungrown leaf from Nicaragua’s Jalapa valley, with a binder from Honduras’ Jamastran valley. The filler also uses tobacco from Jamastran, as well as Honduran La Entrada that is a 2010 vintage. It comes in two bigger sizes, a 5 1/2 x 54 and a 6 x 50, both priced at $6.49.

In a press release, brand ambassador Jack Toraño said “our blending team in Nicaragua re-envisioned a couple of dynamic blends from my family’s original recipes. Both new lines round out the sizes available in the Vault line while continuing the tradition of exceptional blends in stand-out packaging and affordable prices. I look forward to sharing the new Vault lines with Toraño fans at cigar shops and special events across the country.”