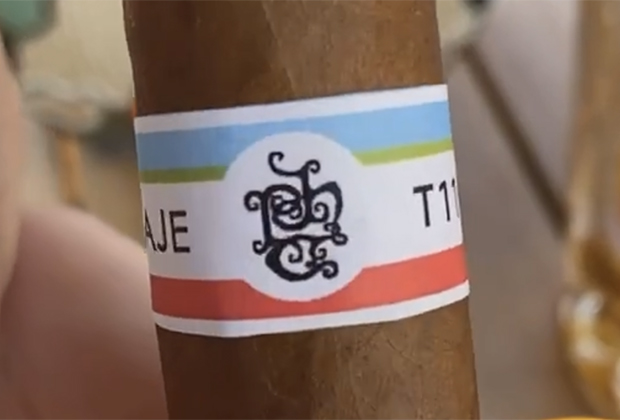 Over the Thanksgiving holiday, Pete Johnson of Tatuaje shared news of the return of one of his earliest creations and a blend with a strength that lives on in infamy, the T110.

Johnson confirmed to halfwheel that the T110 is coming back, though declined to share any details about specifics. The only thing he noted about the cigar was that the bands are currently being printed and embossed, while the one shown in a post came from his printer. “Making a new color way on the limited bands for some upcoming projects,” he noted.

The Tatuaje T110 traces its roots back to July 2009, when Johnson released the original cigar as an exclusive for R. Field Wine Co. in Honolulu, Hawaii. The T in the name was an abbreviation for thermonuclear, while 110 referenced the cigar’s length in millimeters. It was an all-ligero creation, with the Nicaraguan tobaccos coming from Jalapa and Estelí, as well as a limited release, with just 200 boxes of 25 cigars produced.

It was also a cigar that Johnson made almost as a joke given its strength and the adverse reactions it was having on some people. However, that didn’t stop it from laying the groundwork for a new line from Tatuaje.

From that original cigar, a 4 1/3 x 52 petit robusto, Tatuaje would create its Fausto line, which debuted in the summer of 2011 and is known for being on the fuller, stronger end of both the cigar spectrum and Tatuaje’s portfolio. It also resulted in Avion, which was an extension to the Fausto line by way of three new sizes released one per year from 2011-13.

Both of those lines use Ecuadorian wrappers over Nicaraguan binders and fillers.