As part of 2013’s flurry of releases commemorating the 10th anniversary of Tatuaje, a new spin on the familiar Tatuaje Brown Label hit store shelves, a cigar packaged in a zippered travel humidor and called the Belle Encre Reserva.

It’s based on the Brown Label Reserva, meaning that the Ecuadorian habano wrapper was switched for a Connecticut broadleaf wrapper. This gives the Reserva line something special and different to set it apart from the original release, which happened to debut the year earlier in the form of the Tatuaje Belle Encre, a 5 3/8 x 48 perfecto released under the Brown Label banner, the line known more properly as Seleccion de Cazador.

Here’s what I had to say about it originally:

I’m a fan of Tatuaje’s Reserva cigars and so it was a no-brainer for me to buy a box of these when I saw them released. The travel humidor alone was worth the extra dollar raise over the regular Belle Encres, though even in a plain box I think that is easily justified with the Connecticut broadleaf wrapper. The overall flavor profile and construction were great, though there were a couple of slight burn issues that resolved themselves and some bitterness towards the end of the cigar. The big question is though, did I like these better than the regular Belle Encre line, and yes, I did enjoy these better. Having said that, there are other Tatuaje Reservas that I like better and would be more willing to pay for. Overall however it’s still a good cigar and I can easily suggest seeking these out.

Since I reviewed it originally the cigar has firmed up a bit. The wrapper still has a slightly rough but nicely oily feel to it. Earthy barnyard aromas still come off the wrapper in droves, but the cocoa is distinctly missing. The cold draw has mellowed as well, with very light cocoa, pepper and grassy notes barely distinguishing themselves.

With the cold draw and wrapper aroma so muted, it’s almost a surprise when the first third starts out with the same chocolate, fruit, leather and earth – though the pepper has mellowed significantly and is mostly relegated to the background. Chocolate, fruit, leather and earth continue on, though an inch and a half in the pepper has died down to almost nothing. With the pepper all but gone, the second third is much sweeter, with the chocolate and fruit dominating, while the leather and earth continue to complement it in the background. The final third doesn’t see much change, which is perfectly fine with me. Sweet chocolate and fruit lead, with leather, earth, cedar and the lightest bit of pepper coming up in the background. The cigar finishes without getting harsh or hot at all. 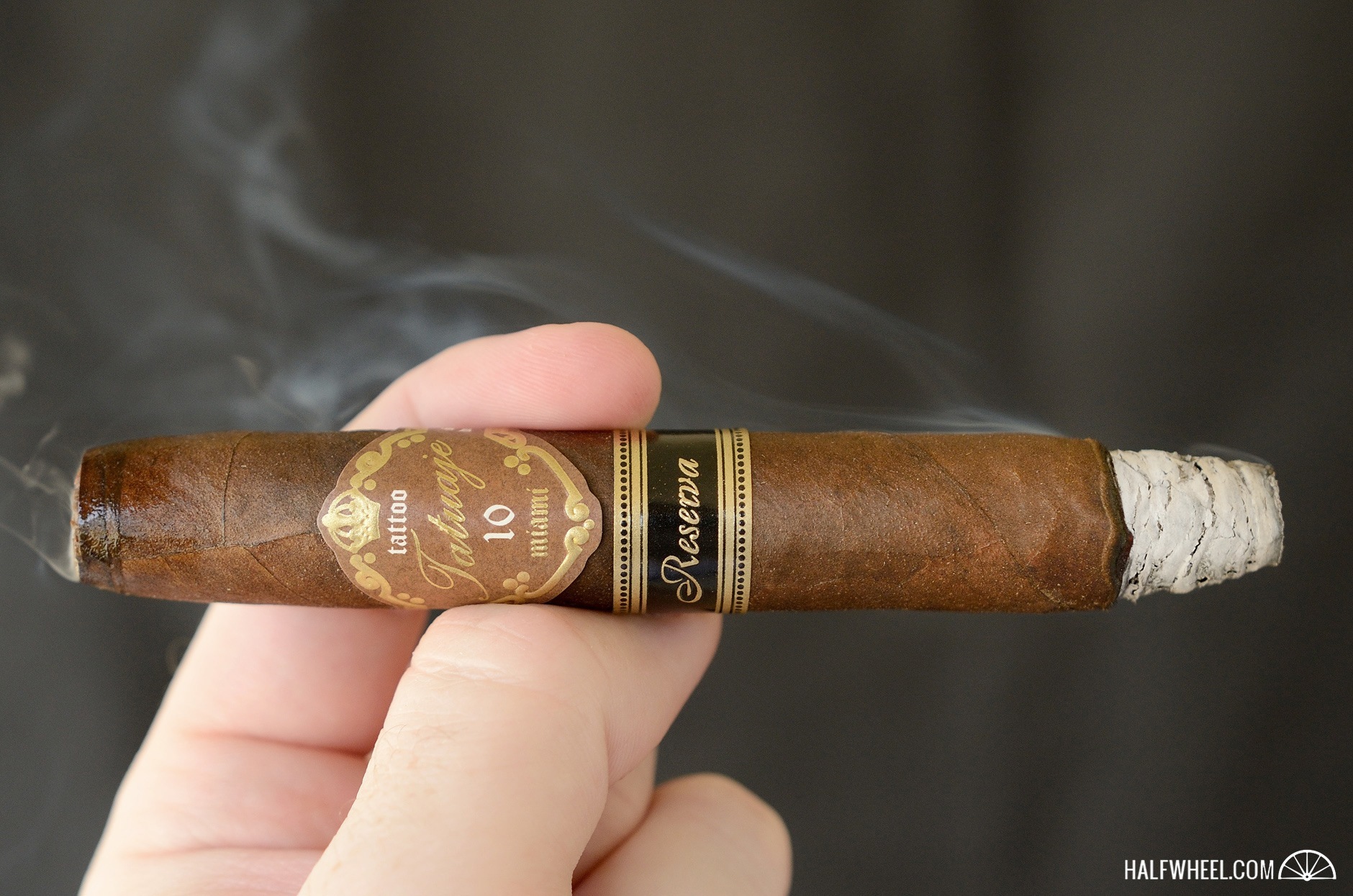 The burn is managing a lot better than I remember in the first third, staying mostly even and sharp through the perfecto shape. Draw is great and plenty of smoke is produced with each puff. Stark white ash contrasts nicely with the dark brown wrapper and holds to around an inch. The second third continues with a fantastically sharp burn line and dense ash that holds to well over an inch. As I move into the final third there isn’t any change in the burn and the ash retention, which is to say great.

I really enjoyed these when I first got them and reviewed them, and then they slowly got buried in my humidor and I think I only smoked maybe two more in the past year. When I was looking for a redux, I saw the Belle Encre Reserva and got excited to try them again. A year has mellowed out the pepper slightly, though interestingly enough the rest of the flavors still shine bright - perhaps even more than before. The burn has straightened up as well, which I would guess the original slight burn issues were because I reviewed these shortly after they arrived. Overall these are a great release that I’m excited to have plenty more to smoke, and if you can get your hands on some I highly recommend it.