Last year to celebrate Tatuaje’s 10th anniversary the company released a few special cigars, two of which were a special sizes of the Brown Label line. Like the rest of last year’s production of Tatuaje Brown Label, the Bon Chasseur (5 3/8 x 52) and the Belle Encre (5 3/8 x 48) feature a special 10th anniversary band. Both are sold in boxes of 20 with a suggested retail price of $10 per cigar.

Earlier this month, Tatuaje began shipping a new broadleaf version of the Belle Encre. As with the usual Brown Label Reserva cigars, the Belle Encre Reserva uses the same filler and binder but instead of an Ecuadorian habano wrapper, a Connecticut broadleaf wrapper is used instead.

Instead of shipping in boxes of 22, the cigars come in zippered travel humidors of 22, priced at $242 per unit—a one dollar increase per cigar compared to the regular version of the blend. 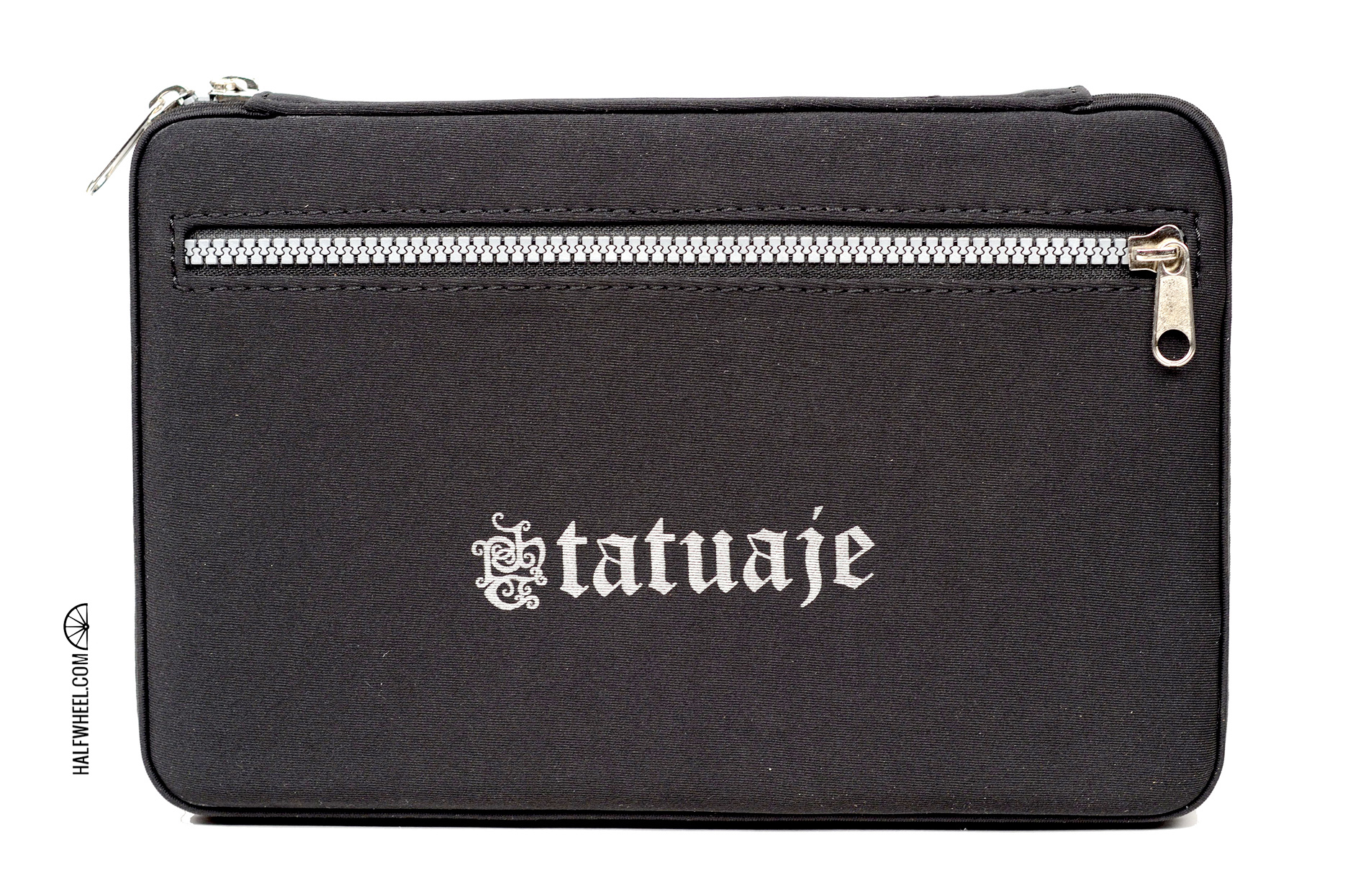 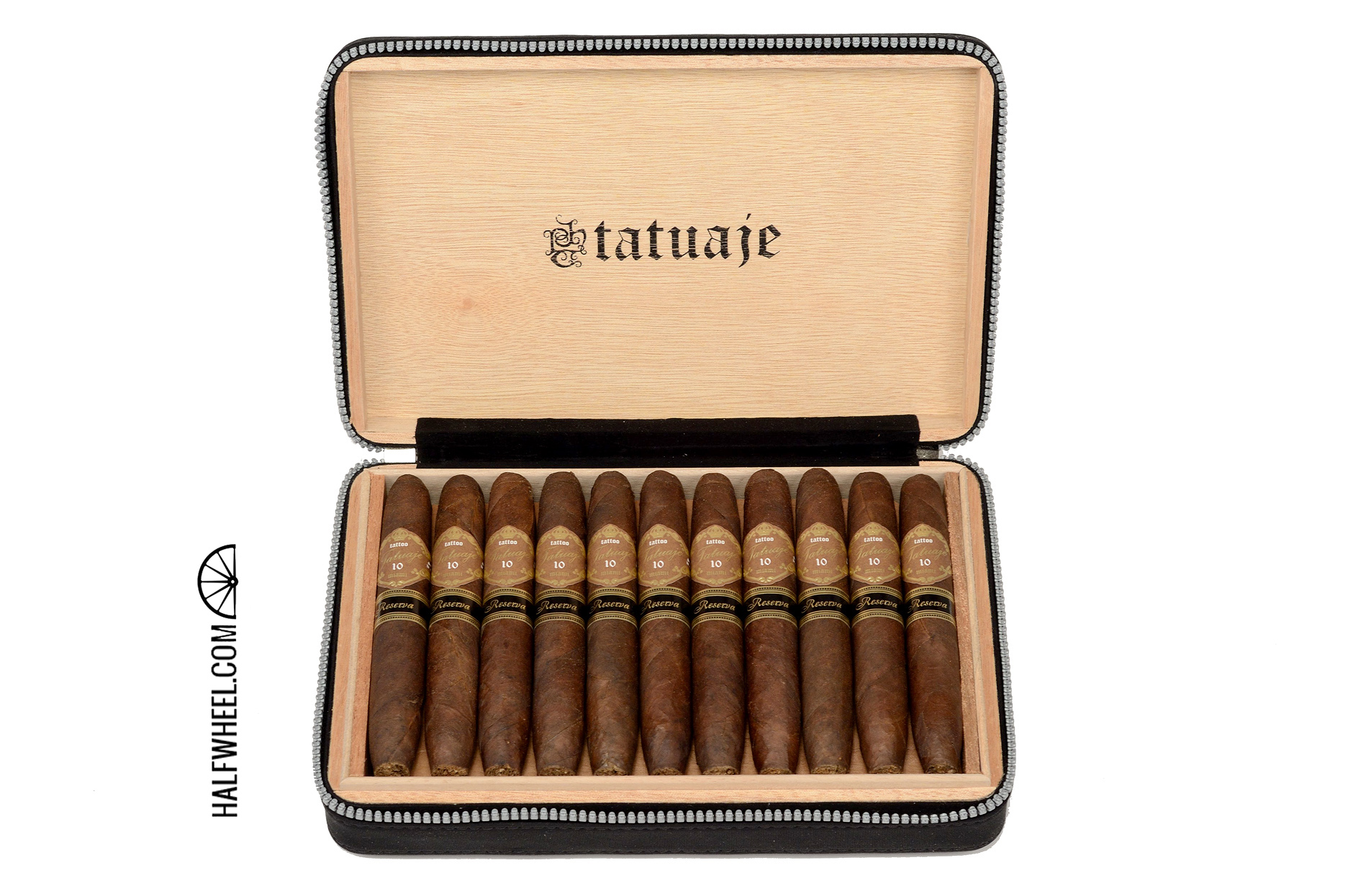 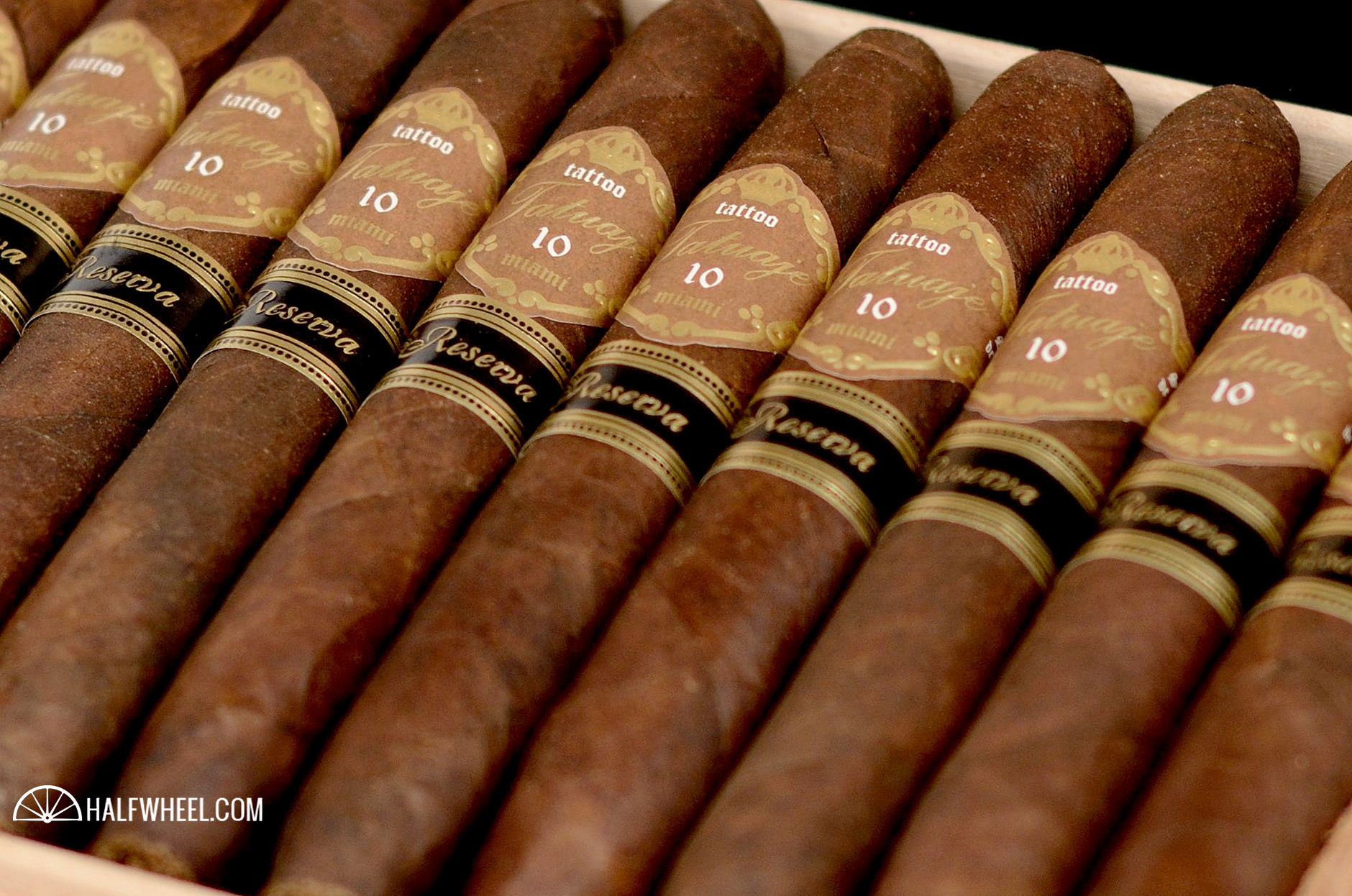 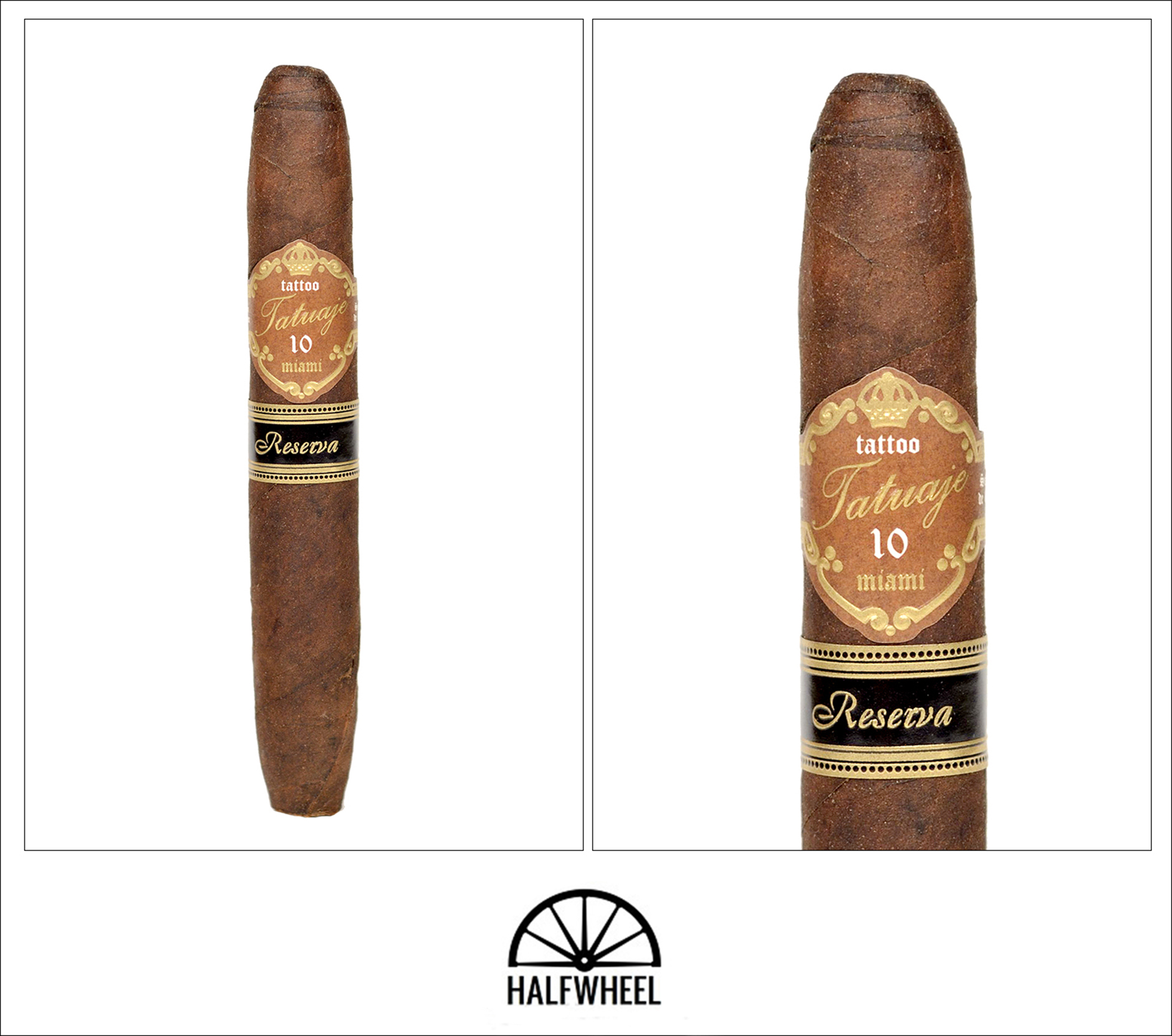 The Belle Encre Reserva is striking, with the 10th Anniversary band popping nicely off the dark wrapper. The cigar has a little give without having any soft spots and the dark brown wrapper is slightly rough with a light oily feel to it. Aroma off the wrapper is a sweet barnyard and cocoa note. The cold draw consists of strong chocolate and pepper with a touch of leather and a light grassy note in the background.

Starting out the first third I get some chocolate and fruity notes at the forefront with a touch of pepper, leather and earthiness in the background. The draw is perfect and just the way I prefer it, just enough resistance without having to work at the draw, allowing the cigar to produce plenty of smoke on each draw. The burn is getting a little crooked, but it corrects itself quite quickly. After about an inch the profile still has the same chocolate, fruit, pepper, leather and earthiness though overall it has become much sweeter. As I usually find with Tatuaje cigars, the retrohale is a bit of a punishment with strong pepper, though a nice cedar note accompanies the pepper and leather note that I didn’t detect on the normal draw. 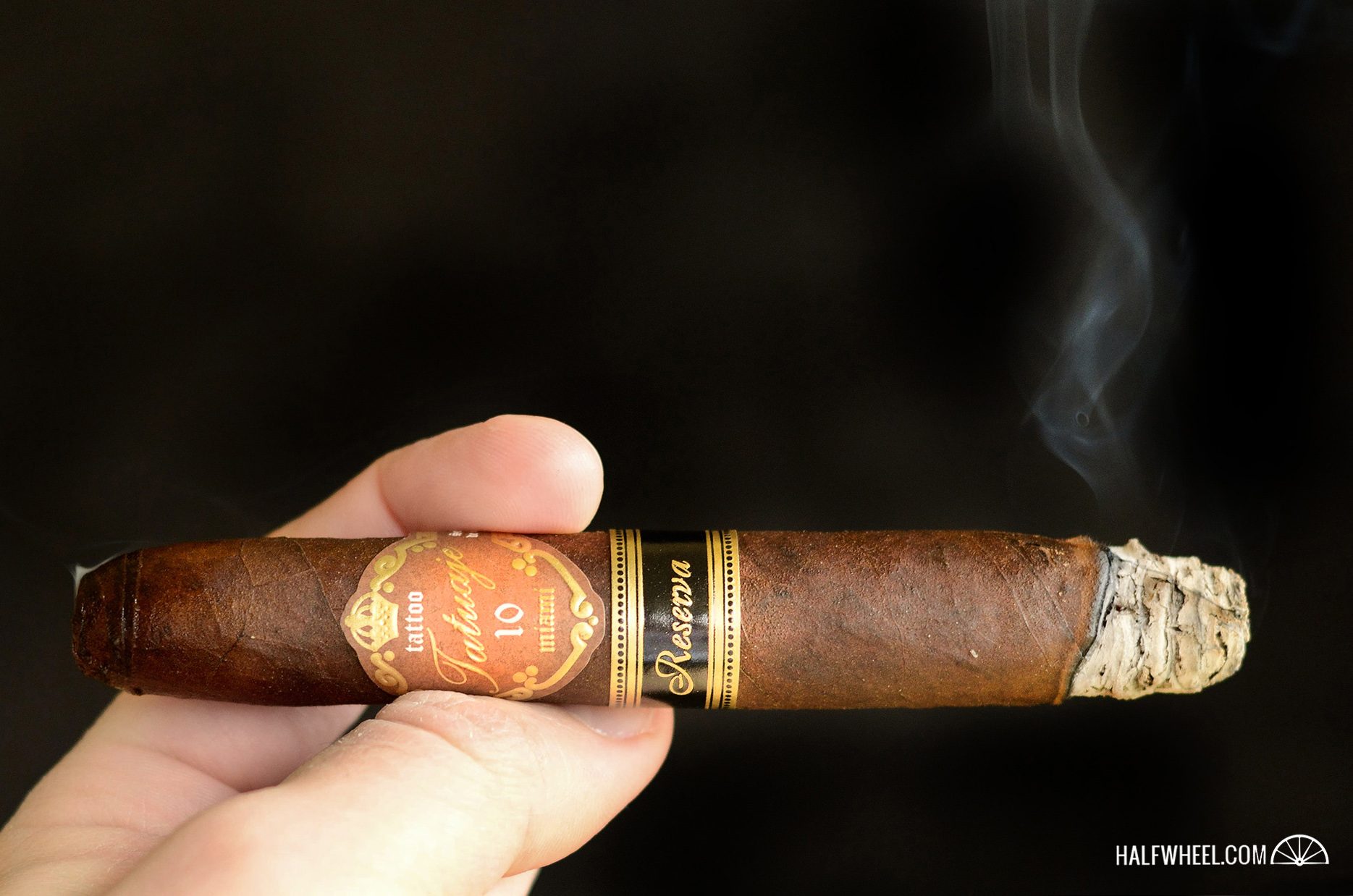 The second third loses much of the chocolate, though the overall profile is still very sweet. The pepper has subdued as well, though it’s still there in the background. Leather, fruit and earthiness are joined by a nice cinnamon flavor, which round out the current profile nicely. The burn has gone a little squirrely again, though as before it corrects itself fairly quickly. 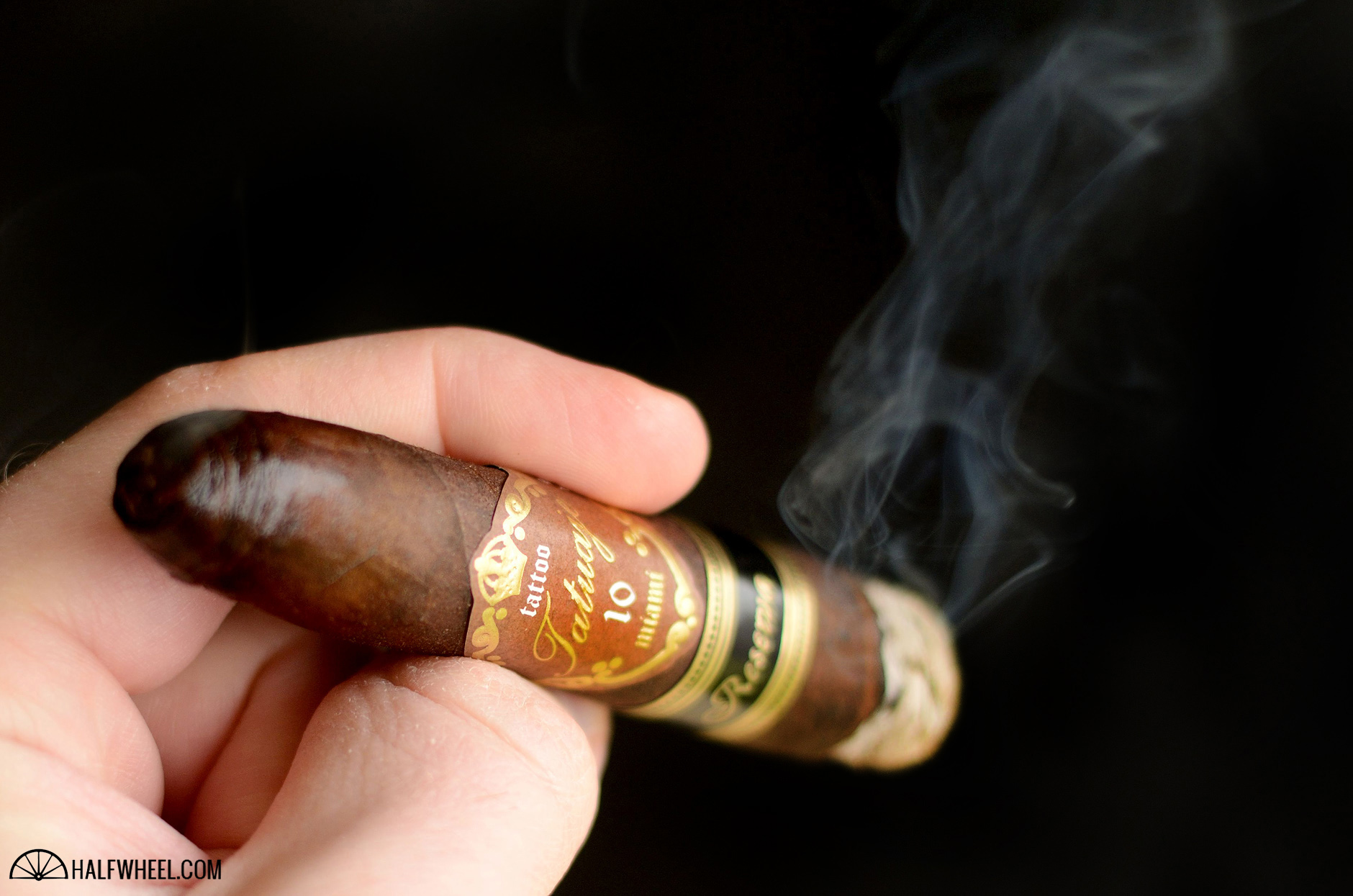 Moving into the final third I’m still getting much of the same profile – leather, fruit, earth and cinnamon at the forefront and some pepper and cedar in the background. The burn has stayed mostly even and hasn’t needed any touch ups. While the Belle Encre Reserva is smoking cool and slow, the last inch and a half starts to get a little bitter, overwhelming the flavors I’ve enjoyed throughout the rest of the cigar. I’m a fan of Tatuaje’s Reserva cigars and so it was a no-brainer for me to buy a box of these when I saw them released. The travel humidor alone was worth the extra dollar raise over the regular Belle Encres, though even in a plain box I think that is easily justified with the Connecticut broadleaf wrapper. The overall flavor profile and construction were great, though there were a couple of slight burn issues that resolved themselves and some bitterness towards the end of the cigar. The big question is though, did I like these better than the regular Belle Encre line, and yes, I did enjoy these better. Having said that, there are other Tatuaje Reservas that I like better and would be more willing to pay for. Overall however it’s still a good cigar and I can easily suggest seeking these out.