The talk of the 2013 IPCPR Convention & Trade Show was a new company called Sindicato.

Over 40 of the country’s top retailers formed a new company called Sindicato. They hired Jim Colucci who previously ran Altadis U.S.A. to lead the new company with the aim of disrupting the cigar market. One of the big mission statements was that the cigars the company sold would never be heavily discounted and there seemed to be undertones that it wanted to try to do things differently than other cigar companies.

I think it’s fair to say Sindicato has failed to live up to expectations, some of which were artificially raised just to show much the company was talked about during those four summer days in Las Vegas.

The company showed off three lines to start with: Hex, a reasonably-priced medium-bodied line; Affinity, something that seemed marketed at squarely taking on the very popular Montecristo White, and Casa Bella, a mixed filler cigar. Along with those three lines, plans were also ,laid out for the company’s flagship Sindicato line.

It might be challenging for many readers of this site to understand, but manufacturers were legitimately up in arms about Sindicato during the trade show. They weren’t happy with how the group was marketing itself, which at its core makes sense: Sindicato wanted to disrupt the cigar business, particularly, the manufacturing side.

At nearly every booth I visited, Sindicato continually came up and it’s something Patrick Lagreid discussed in our post-IPCPR wrap-up post:

There was really no way to know what to expect at the Sindicato booth; when we visited it was Jim Collucci and a few other staffers and the booth was a bit underwhelming, tucked against the wall on one side of the show floor.

If anything, the surprise that came from Collucci about some manufacturers having an issue with a group of retailers starting their own cigar company was a shock. How could he not expect that? What wasn’t seen or heard – at least out loud – was a real outcry from the manufacturers. A lot of people asked our thoughts on them and wanted to know what we were hearing, but it was all taken with a wait-and-see approach.

The company is launched; now they have to sell the cigars and put them up against all the other existing and new brands in their humidors.

The one thing that wasn’t really discussed pre-show was the reaction that certain retailers would have to the line. If you’re a retailer that’s in the same market as another retailer who is part of the Sindicato group, would you carry those cigars? To some, it’s just a way of putting money into the pocket of your competitor. This would seem to limit the reach that Sindicato would be able to achieve, but again, it goes back to the question of whether or not the cigars can sell. If they’re fantastic and fly off shelves, it’ll be a boon for those carrying them. — PL.

By all accounts, fly off the shelf they did not.

To me, the fundamental question as to whether Sindicato would be succeed was whether the company could convince other retailers to carry and push the cigars. As I noted less than six months later, Sindicato had done essentially no promotion on its own. And it wasn’t just advertising, Sindicato wasn’t even using social media.

Coincidence or not, both social media and paid advertising began appearing in early 2014, but it doesn’t appear to be enough. I think many consumers are still extremely clueless as to what Sindicato, or any of its brands are, and that makes the pitch to non-owner retailers even more challenging. For those non-owner retailers, bringing in a cigar that has no inherent consumer recognition, very little in-store presence in the form of events or sales personnel and a bit of negativity due to what took place at IPCPR 2013 remains a big enough issue, let alone the fact that you might be helping one of your competitors succeed.

While I didn’t care for Hex, I did actually like the eponymous Sindicato blend that debuted in 2014 and I thought the Sindicato Maduro that came later that year was a decent follow-up.

Like the others, it’s made by Casa Fernández/AGANORSA, although this cigar is being made at Casa Fernández Miami, whereas the other cigars are made at TABSA in Nicaragua. It’s also limited with only 1,500 boxes of 10 cigars produced. 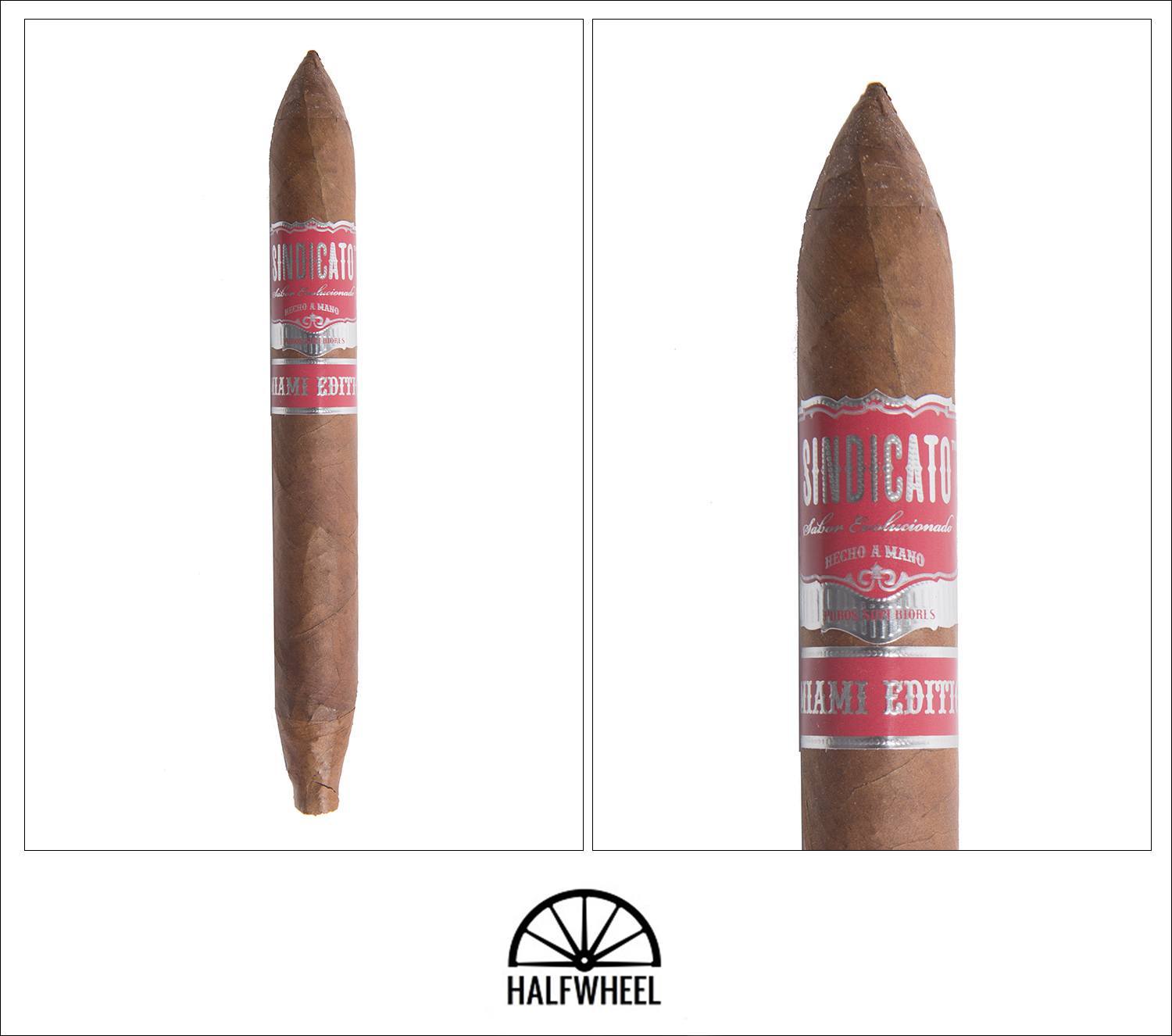 While the cigar looks great, the foot is a different color than the wrapper, a bit lighter on both samples I smoked. Aroma from the wrapper is mainly leather with some saltiness, cedar and a touch of dark chocolate. The foot smells like some of the Drew Estate infused aging rooms: an artificial Cocoa Puffs-like chocolate with just a touch of saltiness. I pick up some of the artificial cocoa in the cold draw, but it’s far less than from the foot, and that sweetness is joined by vanilla and some canned cranberry sauce. The flavors are incredibly even, changing ever so slightly as I take a few additional cold draws.

There’s a nice toasty and sweet start to the Sindicato Miami Edition 2015. The flavor is medium-full with cedar followed by black pepper and a generic toastiness with some burnt hot chocolate towards the finish. Once the nipple burns down, the ash becomes super firm. Flavor-wise, it’s toasty with oak, cedar, an overripe raspberry, nuttiness and some white pepper. Through the nose, there’s some creaminess and popcorn. The construction is fantastic with the ash burning evenly and holding firm along with a very good draw. 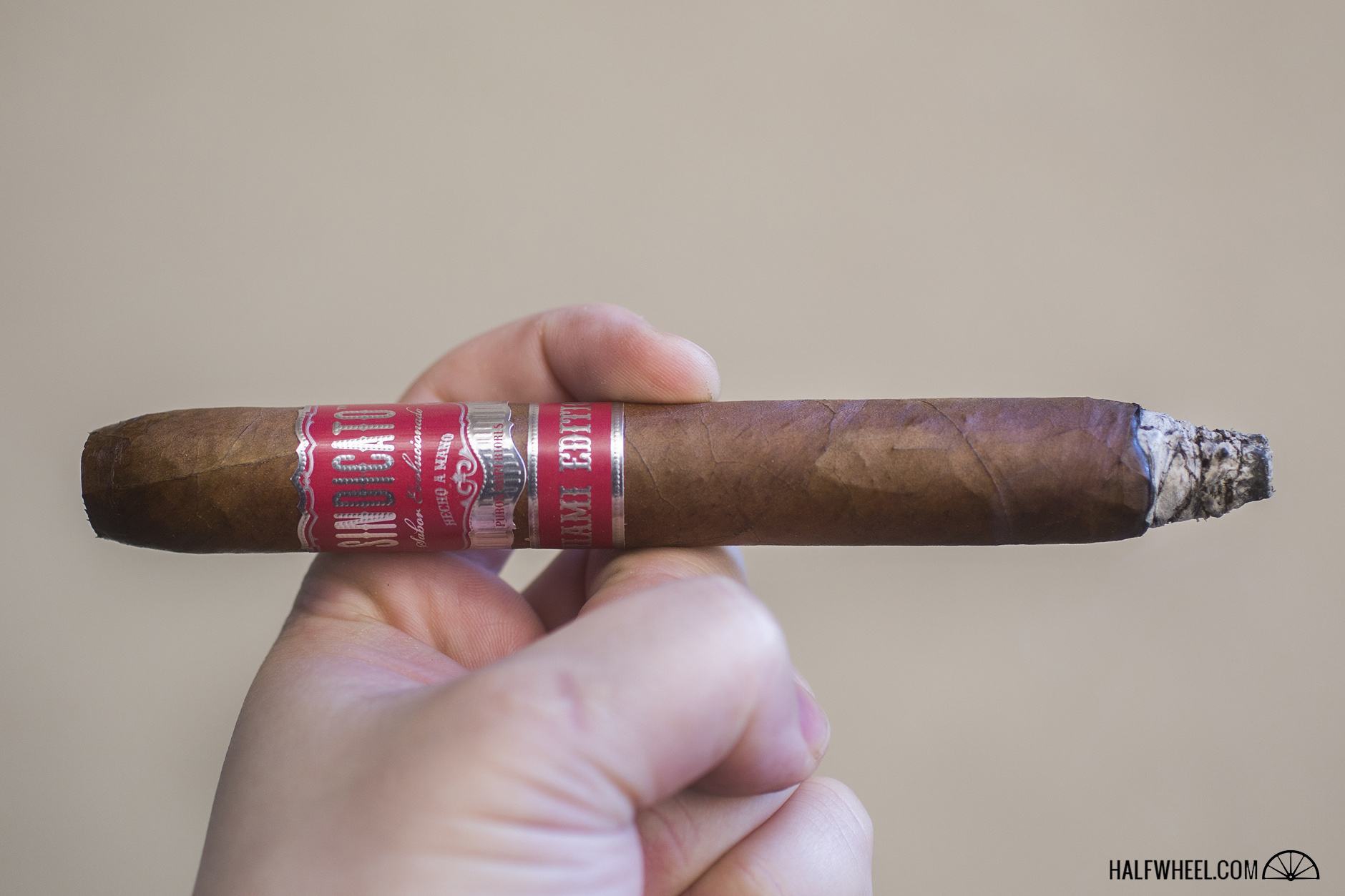 Into the second third of the Sindicato Miami Edition 2015, the saltiness picks up a lot. There’s meatiness, Worcestershire sauce and burnt butter—pretty close to an actual entrée. I find some mild blueberry through the nose along with some red pepper towards the finish of the nose. Construction remains fantastic with the exception of a slightly decreasing smoke production. Flavor is medium-full and the strength is medium plus. 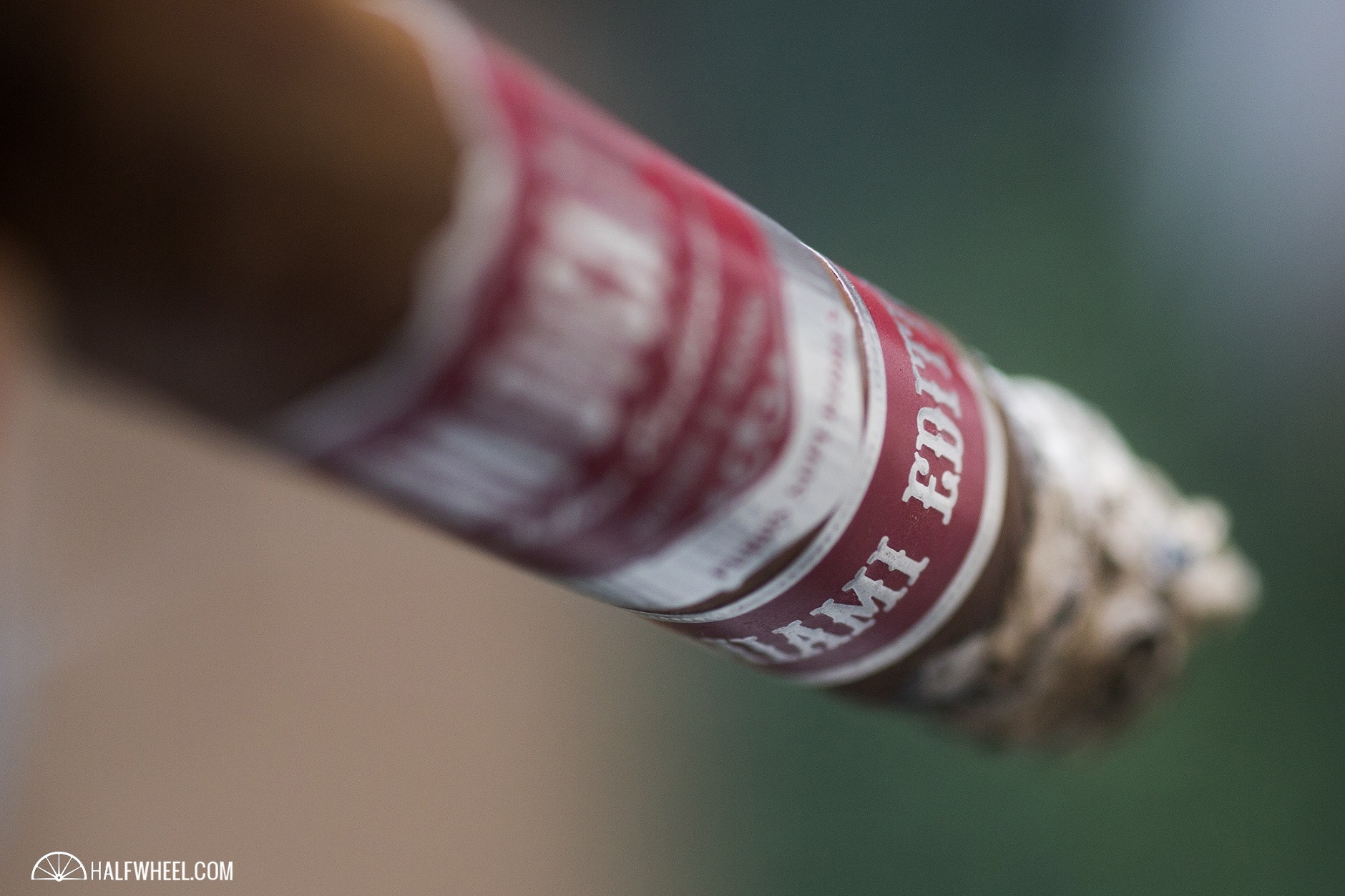 While the Sindicato Miami Edition was burning quite quick for the first two thirds, it slows down quite a bit burn-wise in the final third. Flavor-wise, the Worcestershire sauce remains, but it’s now overshadowed by a creaminess and joined by some creaminess. The pepper removes itself in the nose and manages to allow a faint hint of grapefruit through to emerge. On both cigars the final third takes nearly twice as long as the first two thirds did combined. 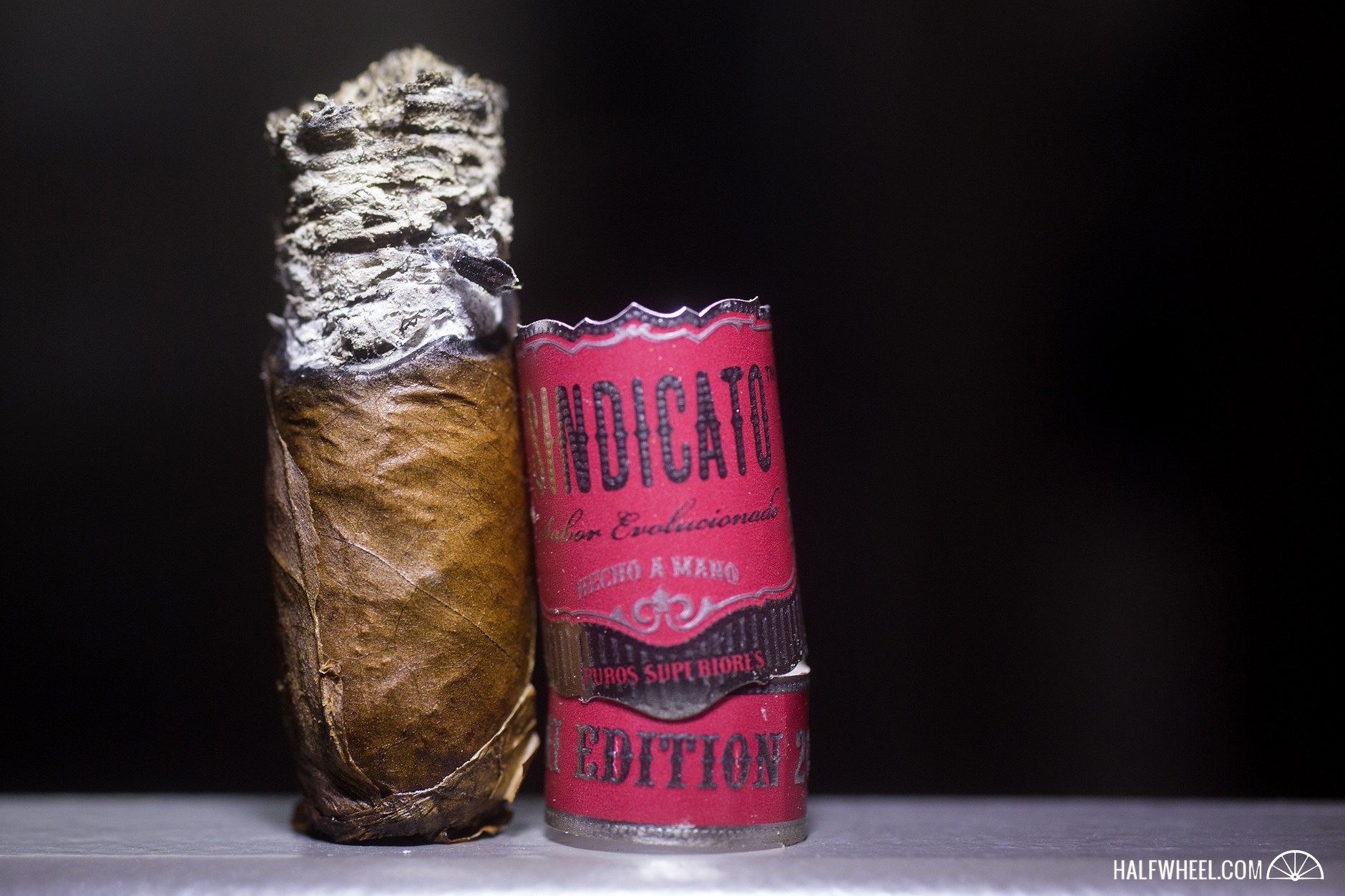 Sindicato entered the world with as much criticism as any cigar company I’ve ever witnessed and it didn’t help that the inaugural blends weren’t particularly compelling. The intention was to compete with cigar companies much larger and as such price seemed to be the largest selling point. The exclusivity of value priced cigars changed with the launch of the Sindicato brand, not to say that any of the eponymous line has been overpriced, it’s simply not a value cigar. As for the Sindicato Miami Edition, it wasn’t the greatest cigar I’ve ever smoked, but there’s no glaring flaws outside of an off-colored foot. This is a good cigar and my favorite of Sindicato’s entries to date.