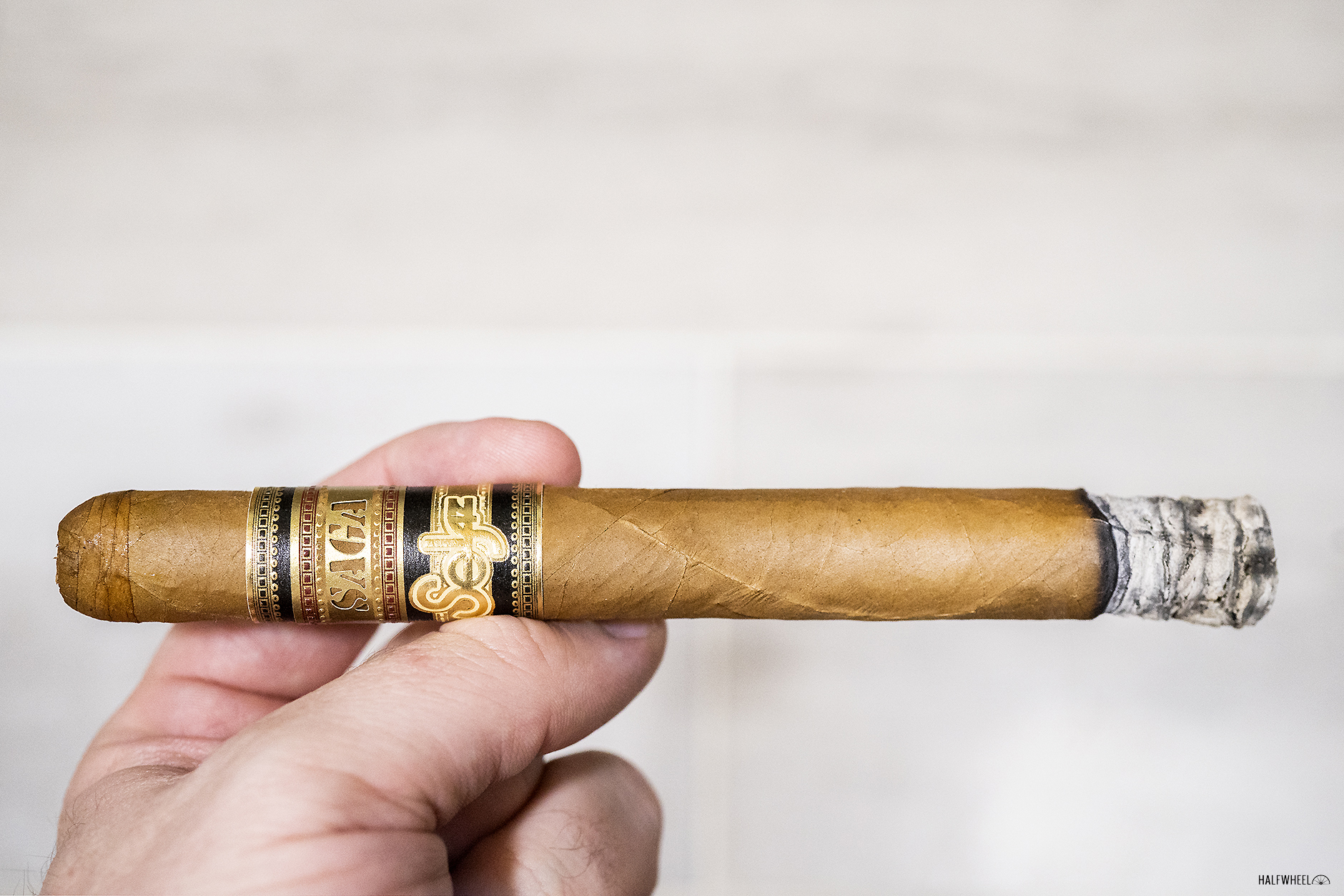 When my turn for a redux review comes around, the process is the same: I pull out the humidor in which I keep all the potential candidates, open halfwheel’s review list, and then try and find something where it’s been a round number of months since I reviewed it. That means a cigar with at least six months of time having elapsed since I originally reviewed it, but ideally one or two years, or occasionally more.

But that was not to be this time, as for whatever reason seemingly all the cigars in that humidor were reviewed in the fall and winter months, leaving me to pick out something else for one reason or another, and today, it’s a cigar that has been staring at me for about two-and-a-half years and one I kept passing over, but have nevertheless remained interested in revisiting, the Sage Solaz Churchill.

Saga is possibly the most well-known line from De Los Reyes, and while the Saga brand has gotten more attention for the Short Tales line in recent years, in 2019 the company revealed an entirely new line called the Saga Solaz. The line gets its name from the time of day that comes after one’s work is done, and the company released it with the hopes that its fans would enjoy it in a period referred to as “the leisure after work.” 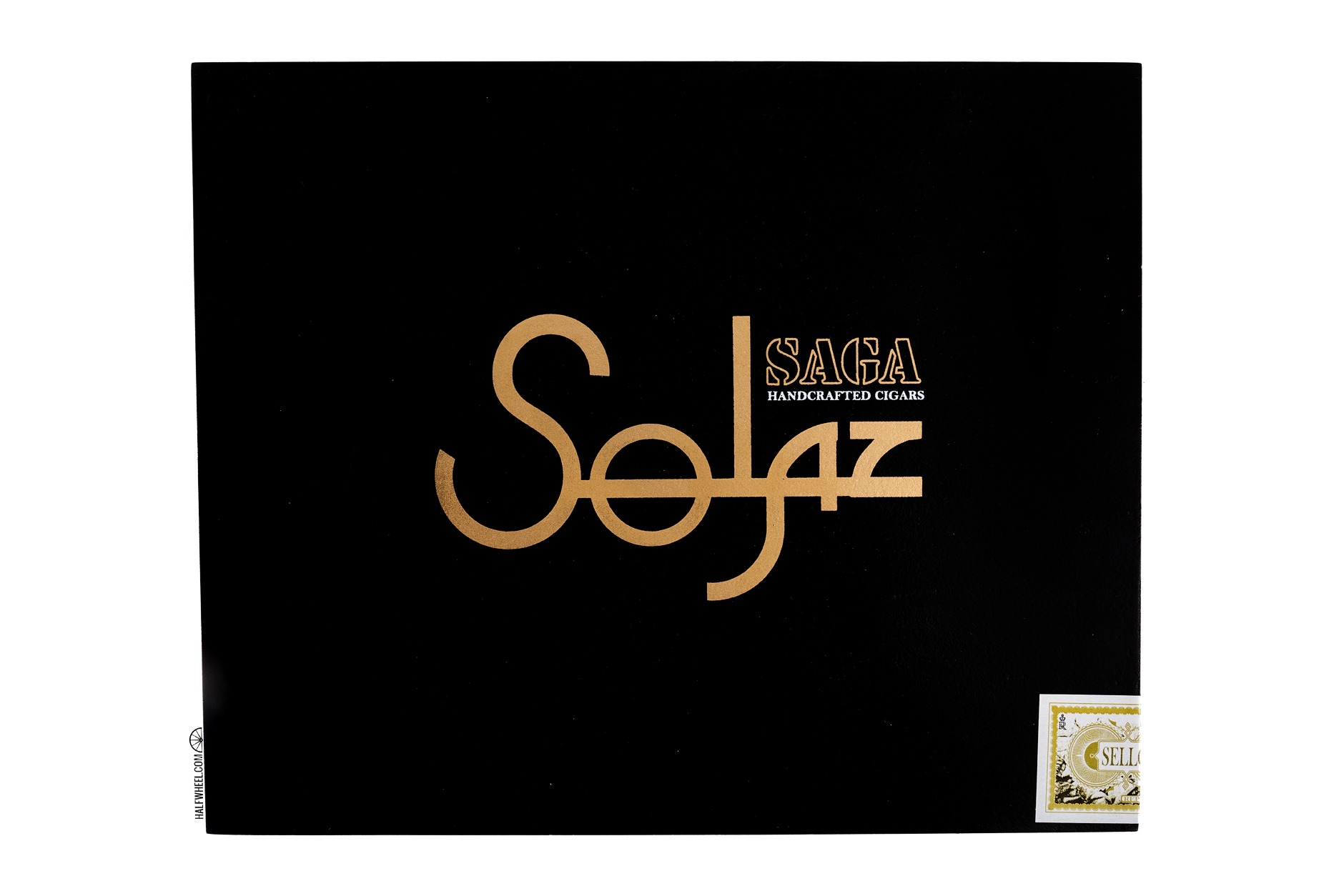 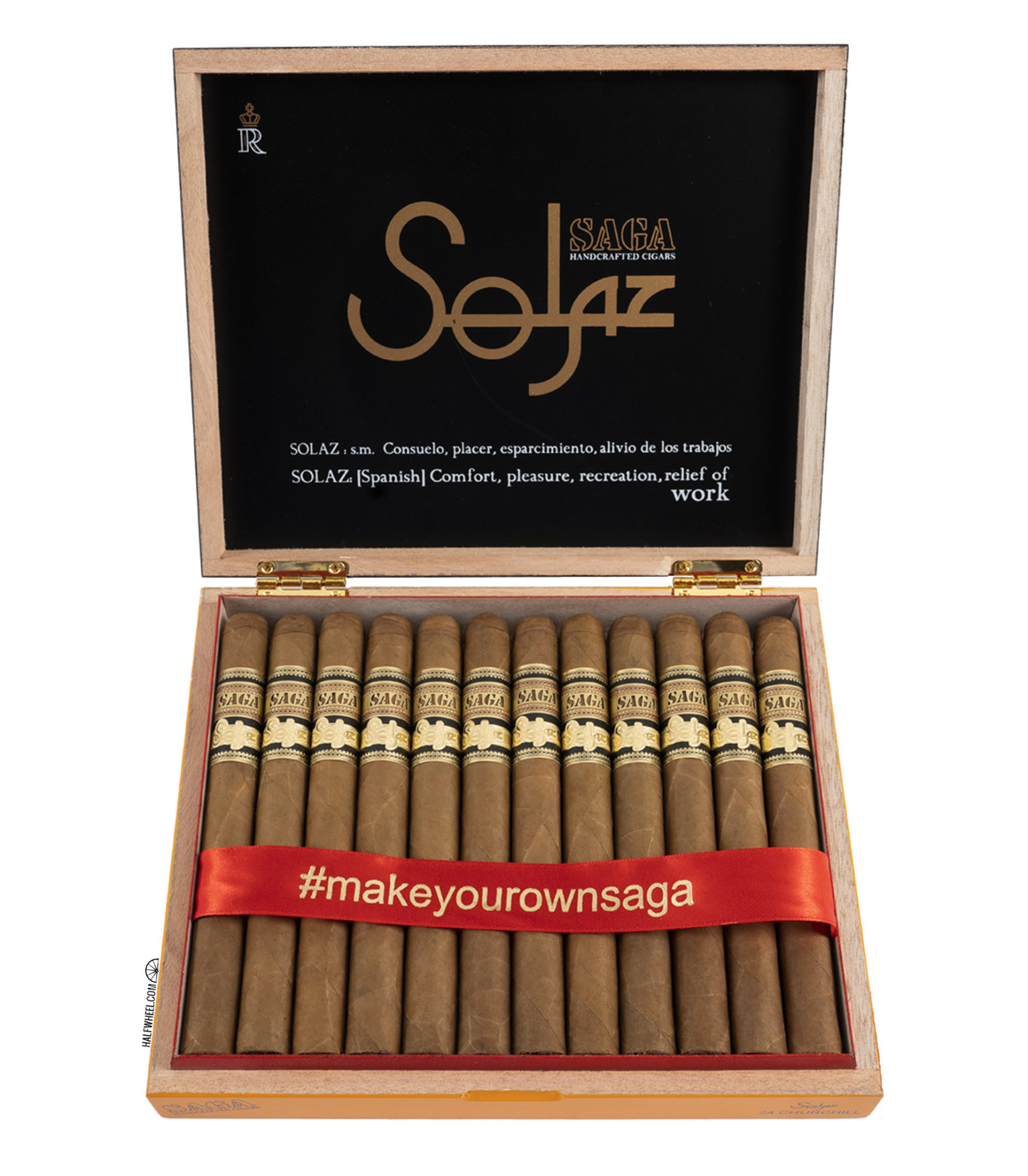 It uses an Ecuadorian Connecticut claro wrapper, while the binder and filler are grown on the company’s farms in the Dominican Republic. De Los Reyes said that it was crafted in an attempt to retain full flavor and complexity while dialing back the spiciness.

The Saga Solaz was released in three sizes, all offered in 24-count boxes: Here’s what I said about the Saga Solaz Churchill when I reviewed it in November 2019:

Whenever I smoke a new cigar, one of the questions I seek to answer is where it might fit in my future options. There are a rare handful of cigars that merit the designation of seeking them out as soon and fervently as possible, there are some that are to be avoided at all costs, and then there is the range in the middle, which I call rotation cigars. Unless you an ardent loyalist to one brand, it would seem most people smoke a rotation of cigars, and I count myself in that group. The Saga Solaz Churchill is a cigar that I’d put in that group of rotation cigars, or at least in consideration of joining that group. If you lean to the milder end of the spectrum, this cigar makes a case to join your go-to options as it offers some vibrant pepper but minimal strength, an ideal combination for when your palate feels like a workout but you don’t want an accompanying gut punch. If you favor the fuller end of the spectrum, the Solaz is still worth trying; you may very well appreciate what it has to offer as well, particularly in the morning or for that first cigar after work. While I would like the Solaz to offer a more developed flavor profile and a bit less of a mouth-drying profile, I would have no objections to smoking the cigar again, particularly if enjoyed with the right after work beverage to soften some of those mouth drying spots and give the overall experience a bit more of a full palate experience. 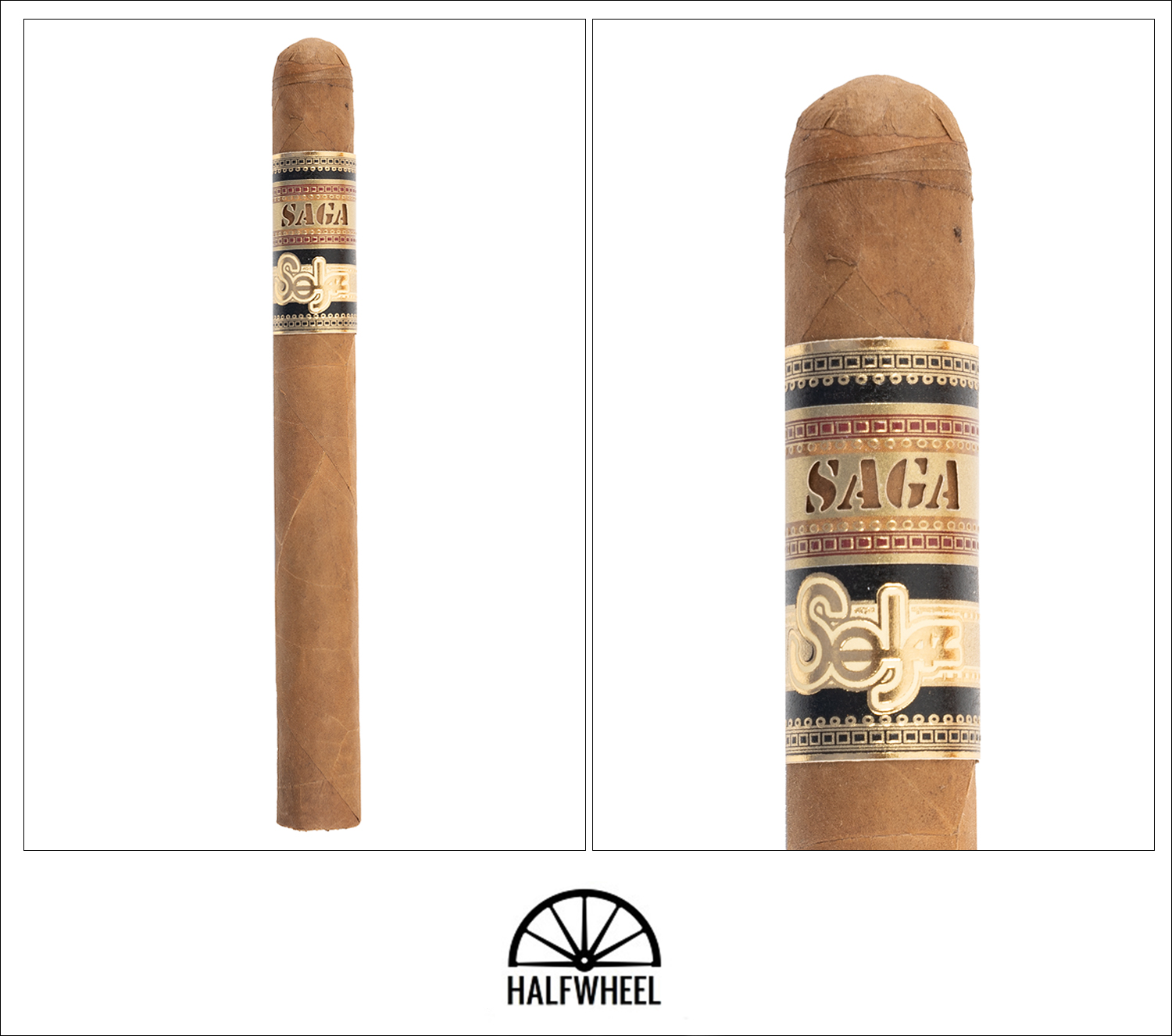 Among all the times I have passed over the Saga Solaz Churchill for a redux, I have noticed how well the bands play off the color of the wrapper, which I attribute in large part to the die cut company logo that allows the wrapper to show through the band, truly integrating it into the design. Once I take the cigar out of the age-tinted cellophane, the cigar itself still looks good, with a wrapper that reminds me of something around a graham cracker color or toffee. I’m surprised to see a fairly prominent vein on the front of the cigar, though in turning the cylinder around I’m not sure there would have been a better option. That’s not to say that the leaf is covered in veins, but there would be a visible vein no matter how the band was oriented. The cigar is fairy dense, and knowing that the wrapper is already a thin one, I don’t want to squeeze the cigar too hard. The foot has a light bread aroma, with a bit of a sweet undertone but little in the way of pepper. I could make the case for some plain, slightly oily potato chips being in the aroma as well. The cold draw is fairly open and shows just a little bit of resistance and almost no flavor, save for a bit of cardboard.

The Saga Solaz Churchill starts off much like I would expect given the cold draw, with a dry, toasty sensation but that now has a bit of black pepper sprinkled in to the profile. It’s a profile that takes me through most of the first inch of puffs, but then the body thickens up with a bit of creaminess that reminds me a bit of plain yogurt, and the pepper gets much heartier. I pick up this change on a retrohale, noticing how all of a sudden what had been an average-bodied smoke was not quite full, while the pepper has suddenly opened up, first delivering a bit of a punch, then an unfolding tingle. It’s not the most complex profile, but what it offers in those first puffs are good enough to distract from the lack of depth. That sentiment doesn’t necessarily change as the cigar burns, but it does wane a bit, a shift in opinion that is furthered by the toast component increasing and wearing a bit on the palate. Fortunately, just as I am about to call the first half of the cigar a wrap, I get a more familiar creaminess than what I got earlier, and It at least tries to provide some balance, though it quickly gets left in the dust when it comes to the finish. Flavor is medium-plus, body splits time between medium and medium-full, and strength is mild. Construction and combustion are generally very good, as even with a slightly open draw, the cigar doesn’t feel loose and still produces plenty of smoke. My biggest complaint is the propensity of the ash to drop off at less-than-ideal times, notably when it’s over my desk as opposed to when I’m ready to tap the ash into the ashtray.

The second half starts by holding onto that creaminess and finally backing off the toasty flavors, shifting towards corn flakes and a bunch of dry, corn cereals, while black pepper is sprinkled in for a bit of tingle on the taste buds. Retrohales are more forthcoming with the black pepper, reshuffling things so that it is the lead and dominant sensation, while almost pushing the cereal out of the equation. There also seems to be a bit of earthiness through the nose that I have yet to pick up on the palate. While my palate had just begun to move past the toast of the first half, black pepper quickly steps in to fill the void. Fitting with the overall profile, it’s not the heaviest or most vibrant expression of black pepper that I have ever tasted, but when combined with the remnants of the toast from earlier, and an already somewhat fatigued tongue, its impact is certainly felt. There is an interesting vanilla sweetness beginning to emerge from the aroma and on retrohales. While the smoke production didn’t need to increase, it does and produces hearty clouds of smoke with each puff as the cigar enters its final third. My palate is calling out for more of the sweet creaminess from earlier, but the cigar serves up a charred black pepper, which is eager to leave a lasting tingle on my taste buds, yet doesn’t completely sour me on the profile as it brings the cigar to a close, with smoking time clocking in at an even two hours. Construction and combustion are both flawless and problem-free. Flavor finishes medium-full, body is medium-plus, and strength is medium-minus.

When thinking about how to sum up this redux of the Saga Solaz Churchill, I was struck by a line in the summary of my original review: This cigar makes a case to join your go-to options as it offers some vibrant pepper but minimal strength, an ideal combination for when your palate feels like a workout but you don’t want an accompanying gut punch. My palate certainly got a workout thanks to the toast and pepper of the cigar, yet there was no nicotine strength. Also like when I first smoked it, I would have liked for the Solaz to have a more developed flavor profile, as while it is enjoyable, there are too many spots where it feels a bit thin and shallow. My biggest question is whether I missed the peak of this cigar or if it is still to come; whatever the answer, I still find the Saga Solaz to be a cigar worth trying and possibly adding to your cigar rotation.