In 2016, De Los Reyes released the first two entries in an ambitious series that the company has stated will eventually span 10 different cigars. Named the Saga Short Tales Series, it’s noticeably different from most collections of cigars given that the first seven cigars have used both different vitolas and also different blends. There’s also the packaging—some of the most unique used for any cigar—which features boxes made to look like vintage books, complete with individual paper pages that feature not only art and writing, but also stains to simulate age.

Three additional vitolas debuted during the 2017 IPCPR Convention & Trade Show, while the sixth member was released in July 2018. After that, nothing was heard from the series for three years, until the company announced the addition of the Saga Short Tales Tomo VII – Tales of the Land: Navarrete.

The newest cigar is named Tales of the Land: Navarrete after a Dominican town located about 15 miles northwest of Santiago de los Caballeros that is considered to be the heart of the Dominican cigar industry. The town also happens to be the place where the Reyes family harvested its first crop of piloto cubano tobaccos.

Physically, the Saga Short Tales Tomo VII – Tales of the Land: Navarrete is a 5 x 52 box-pressed robusto that incorporates a Nicaraguan habano wrapper covering a Dominican San Vicente binder along with three different Dominican tobaccos in the filler: criollo 98, HVA and piloto cubano. Each cigar carries an MSRP of $9.30 and it is packaged in boxes of 10 that debuted during an event on June 30 at LG Cigar Club in San Jose, Calif. before shipping to retailers nationwide in September.

There have now been seven different releases in Saga’s Short Tale Series. 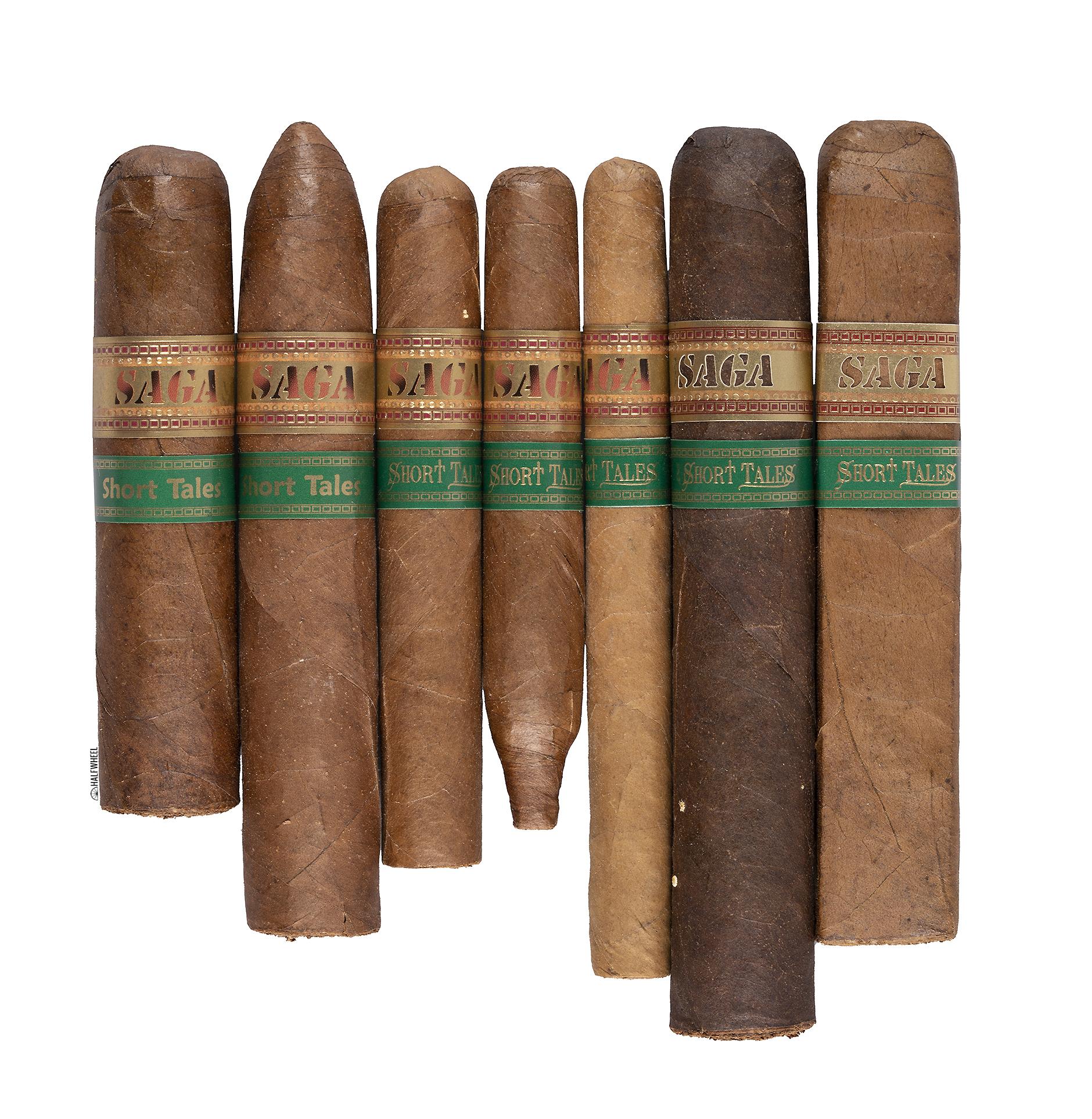 Stocky and thick in your hand, the Saga Short Tales Tomo VII – Tales of the Land: Navarrete is covered in a mocha brown wrapper that is silky smooth to the touch and features just a hint of visible oil. There are some pretty prominent veins running down the cigar’s length and the extreme box-pressing lines are crisp and clean. The aroma from the wrapper is a combination of earth, manure, leather, cedar and slight soap, while the foot includes notes of sweet almonds, cocoa nibs, cedar and barnyard. Finally, after a v-cut the cold draw features flavors of strong cedar, leather, All Spice, almonds and generic sweetness.

The profile of the Saga runs into problems almost instantly after I light the foot, highlighted by a very strong bitterness on the palate and finish along with some significant black pepper and spice on my tongue. After a few puffs, those morph into top notes of aged cedar and leather, but unfortunately, the bitterness remains quite obvious on the finish while there is still quite a bit of spice on my tongue. Secondary flavors of powdery cocoa nibs, gritty earth, generic nuts and slight citrus flit in and out and there is plenty of black pepper on the retrohale, but very little sweetness to compensate. In terms of construction, the draw is a bit loose after a v-cut—albeit still within normal limits—but the burn line is all over the place and I am forced to correct it with my lighter as well as relight each sample at least once. Flavor and body are both at medium, while the strength easily hits a solid medium by the end of the first third.

While there are some very minor improvements during the second third of the cigar, the profile as a whole does not get much better: the bitterness on the finish is still a major player in the profile, sometimes all but overwhelming the main flavors of cedar and leather. Additional notes of gritty earth, nuts, tobacco, barnyard and bread continue to play a small role, while there is still plenty of spice on my tongue that does not seem to be going anywhere anytime soon. In addition, the retrohale continues to be dominated by black pepper, with nothing more than a hint of generic sweetness to be found. Construction-wise, the burn continues to need multiple corrections and relights to keep things moving along on all three samples, although the smoke production is about average off of the foot. Flavor remains at medium, body has increased to medium-full while the strength has seen a small uptick to land just above the medium mark by the time the second third comes to an end.

Unfortunately, things don’t get any better for the Saga Short Tales Tomo VII during the final third, with a profile that still includes the same main flavors of cedar and leather as well as the same significant bitterness on the finish. While there are other notes of barnyard, earth, paper, bread and slight citrus present, they are relegated to the background and never come close to moving up enough to impact the profile in any major way. The overall construction remains problematic for two cigars with multiple corrections and relights, although—in a turnaround—the third cigar actually gives me very few issues in that regard. Flavor ends up just over medium, body ends at medium-full and the strength hits a point halfway between medium and full by the time I put the nub down with an inch remaining.

There is no nice way to write this, so I will get to the point: the three Saga Short Tales Tomo VIIs I smoked were not very good cigars. The profile starts out with an almost overwhelming bitterness on the finish that never dissipates, thus negatively affecting both the flavors and balance of the entire cigar as long as it is present. Construction issues that included both corrections and relights on all three samples, and combined with the flavor, it's not the most pleasant cigar to review. There have been some very good cigars released as part of the Short Tales Series, but at this point in its life, the Short Tales Tomo VII – Tales of the Land: Navarrete is not one of them.