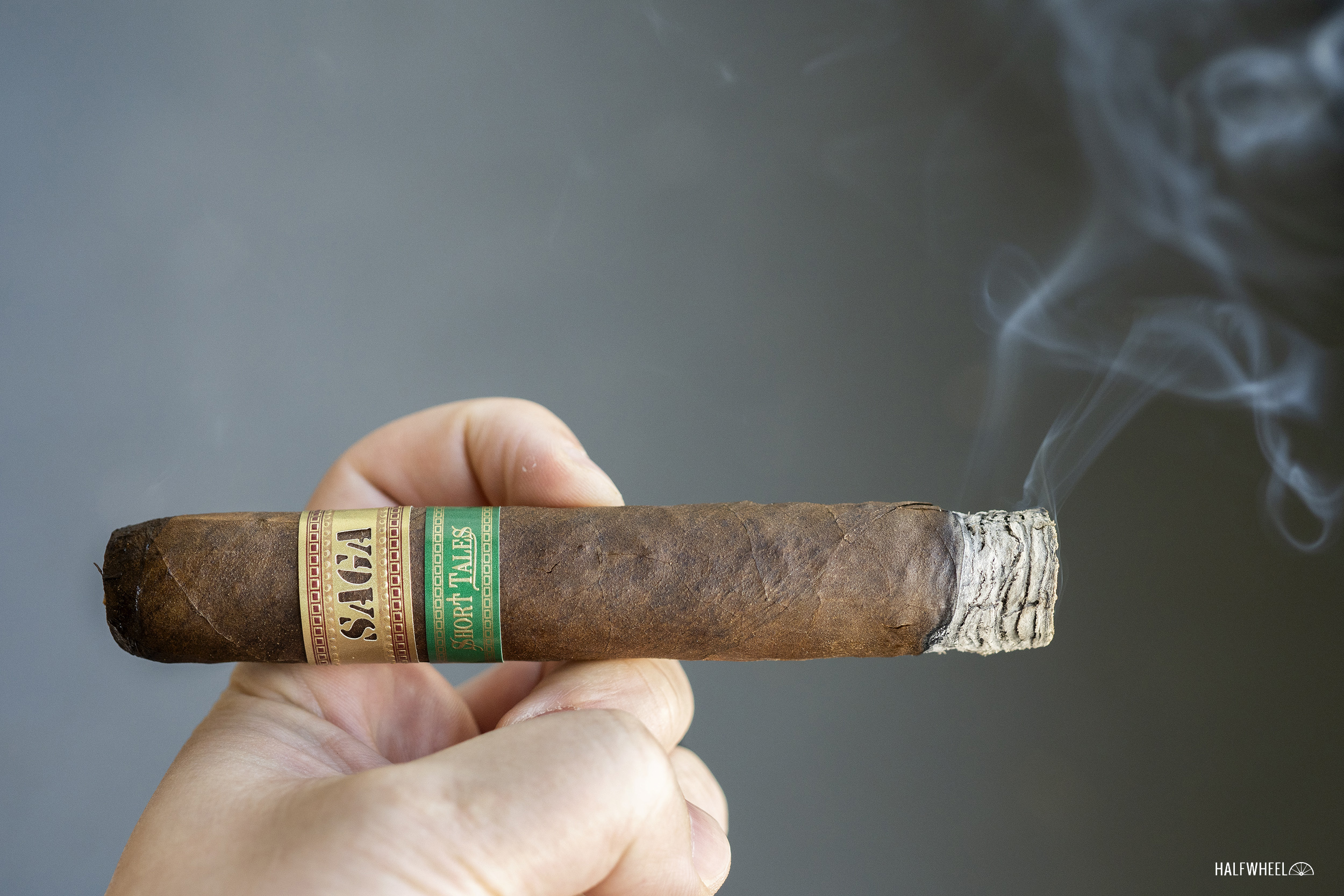 With the Saga Short Tales Series, the boxes are books, I think. The outside of the box is designed to look like a bound book, complete with some artificial signs of patina. The bulk of the inside of the boxes are used to store cigars, but there are some actual pages inside the book, which I think qualifies it as a book. As the series has progressed, De Los Reyes’ creativity in regard to the book-like elements has continued to get more impressive. 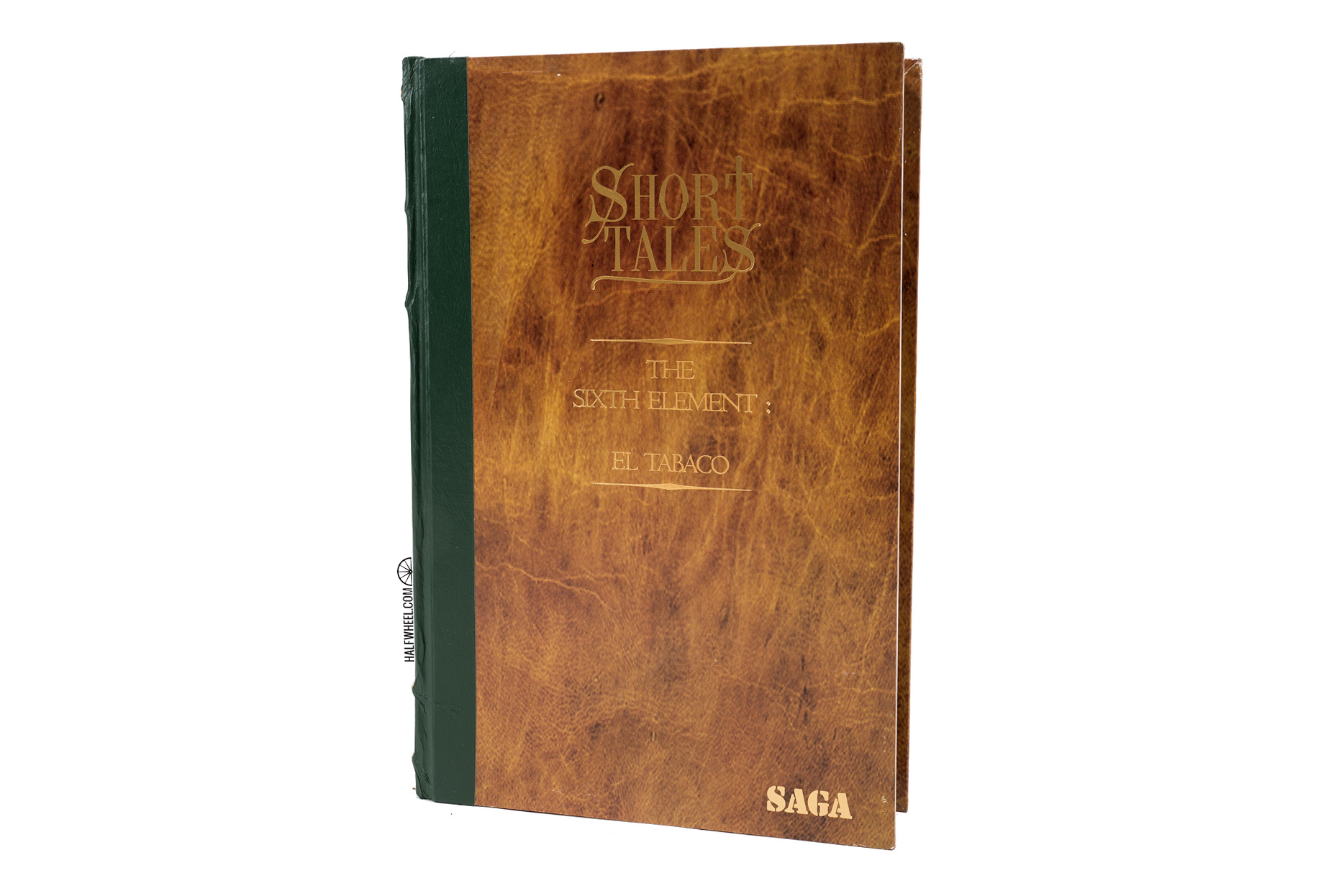 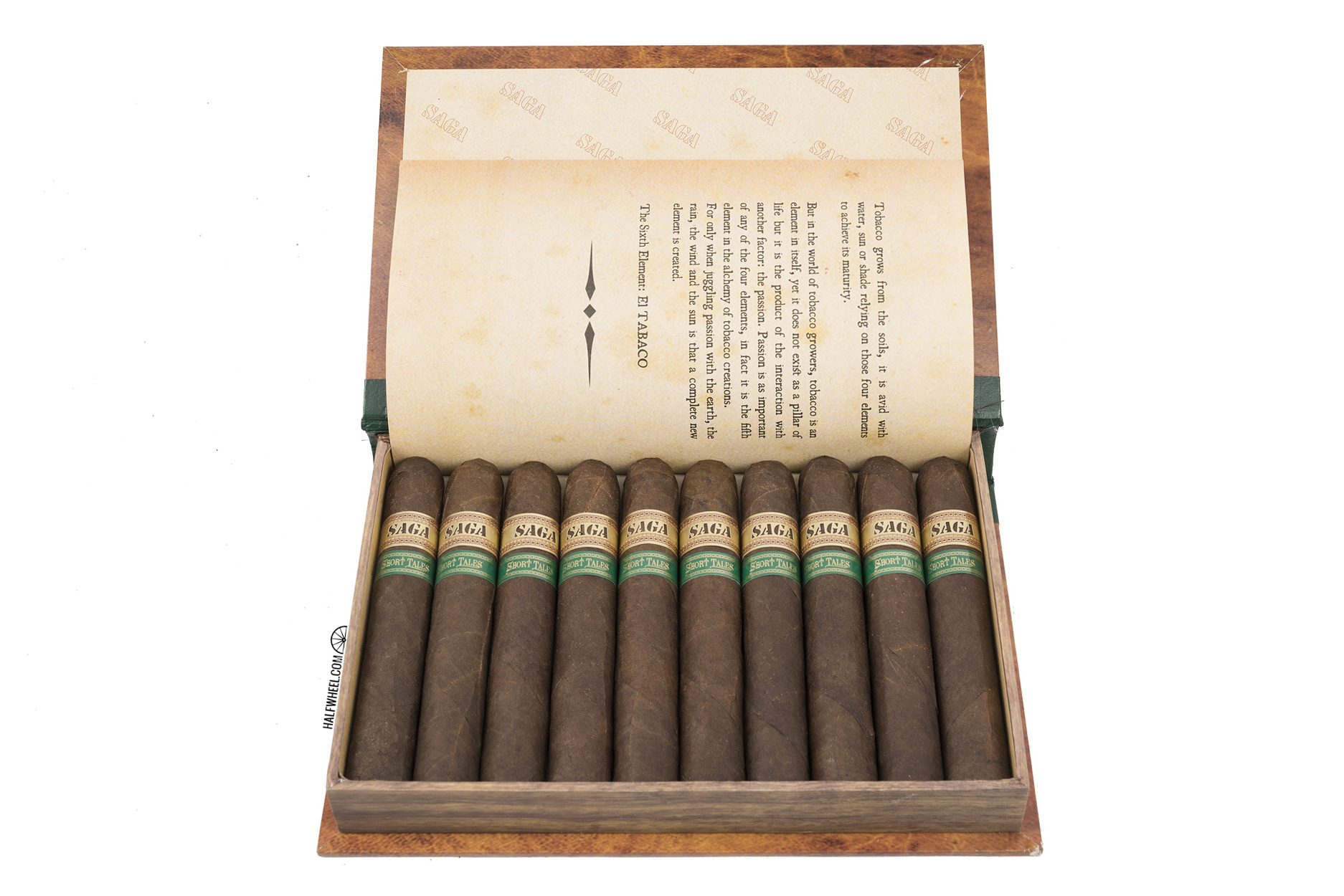 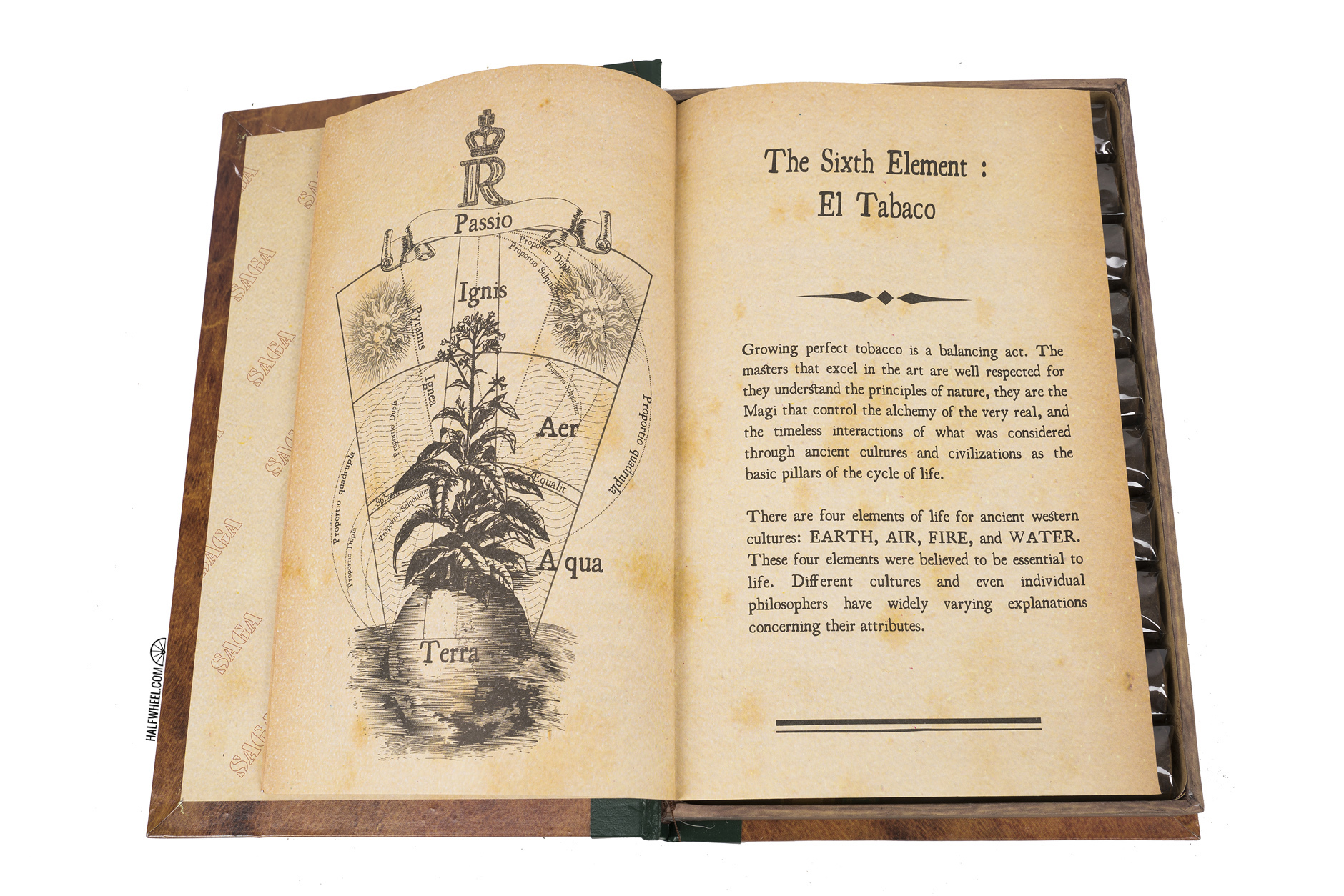 The most recent release in the series is the Saga Short Tales: Tomo VI: The Sixth Element: El Tabaco. It’s a 5 1/2 x 58 gordo size that uses a Mexican San Andrés wrapper over a Sumatra binder from an undisclosed country and fillers from the Dominican Republic, Nicaragua and North America.

While De Los Reyes was very active in releasing new sizes from 2016-2018, there have not been any additions since 2018. I don’t remember if the plan was for 10 or 12 total cigars for the series, but regardless there were plans for more. 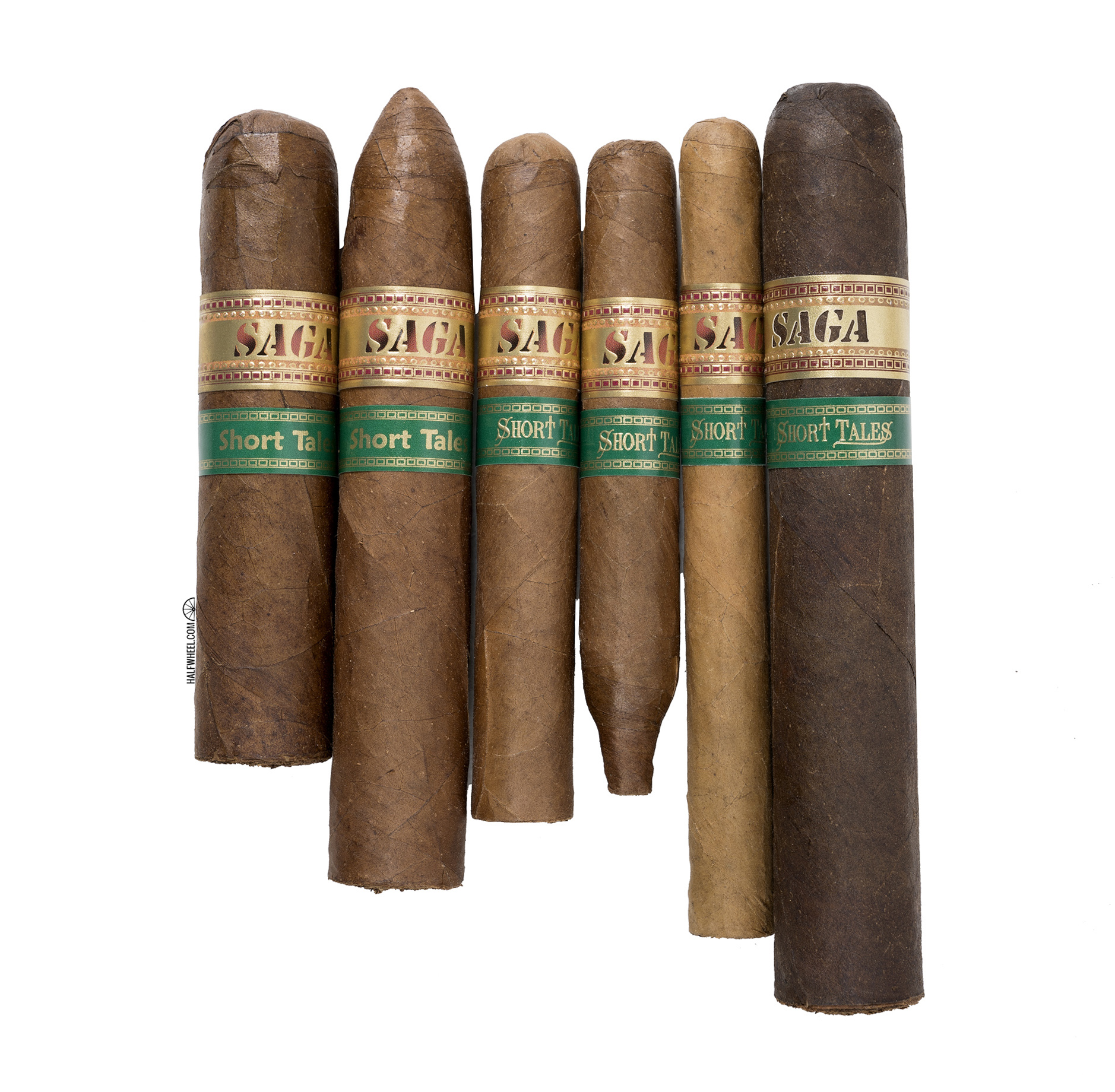 While it may not be the size I smoke the most of—Tomos 3 and 5 get that honor—I think Tomo VI is the most complex of the series. Here’s what I said when I reviewed the cigar in December 2018:

Like the Monster Series or Davidoff’s Chinese Zodiac Series, it’s somewhat inappropriate to group the Saga Short Tales Series’ cigars together. I understand they share a bond in the form of packaging and a name, but the blends are radically different. As such, it’s not easy to confidently say that if you liked the first release or the second release that you will like this version, the sixth release. As someone that has smoked all six, I can tell you that this is my favorite. That being said, while the flavors are developed and detailed, they aren’t particularly harmonious. Pairing the cigar with a drink or even food like chocolate or cheese would probably help to mask this flaw, but even if you smoke the cigar without anything to eat or drink, you are still smoking a good cigar. 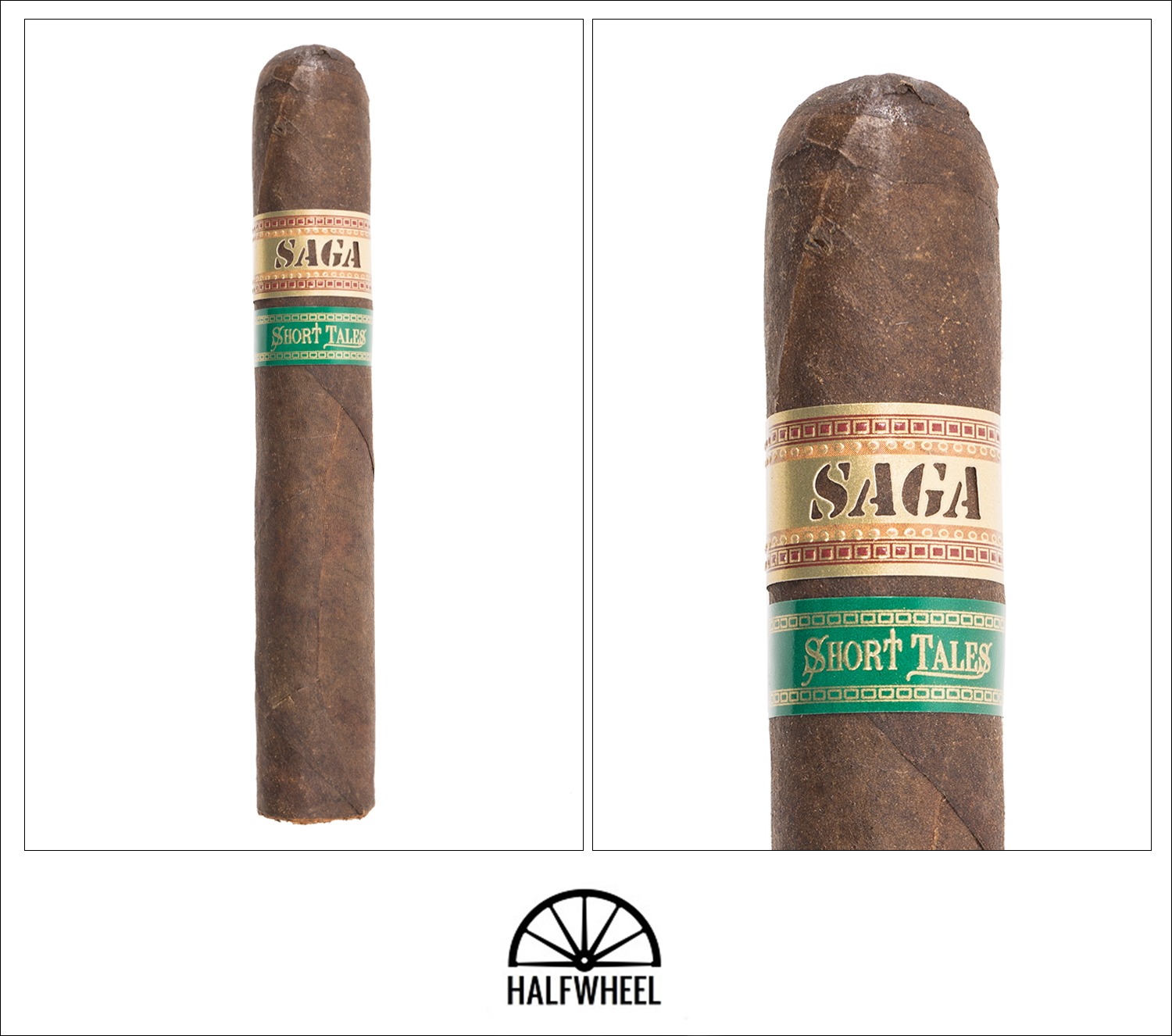 When I opened up the box, I was reminded that this isn’t the type of wrapper I would expect from De Los Reyes. It’s dark, gritty and pretty devoid of oil. I’m also reminded that while the logo might be a bit industrial for my tastes, I love the execution of the concept. Rather than a printed SAGA text on it, the letters are actually cutouts that allow the dark wrapper to show through the gold band. This cigar wasn’t stored in cellophane and it shows when I smell the wrapper. There’s not much in the way of aroma, just some sugar sweetness. The foot is medium-full with a floral sweetness over top some oak. While there’s not much in the way of defined flavors, the floral sweetness is very distinct. The cold draw has flavors that are similar to the aromas, a sugary sweetness that is more bubble gum than floral, then coffee and a bit of oak, right around medium-plus. Given the last three cigars I’ve smoked for reviews have been 70 ring gauge, the 58 ring gauge is a nice change of pace.

The Saga Short Tales: Tomo VI: The Sixth Element: El Tabaco begins with a delectable mixture of sweetness, meatiness, leather, some Tostito’s chips and a bit of leather, around medium-plus. After an inch or so of ash has formed, the profile has shifted to oak, wet leaves, creaminess and a ketchup-like sweetness. It finishes with earthy terroir flavors, something that reminds me of a wet pile of leaves and some white pepper. Retrohales have the familiar wet leaves flavor, along with some bubble gum sweetness and a bit of sherry. The finish is a mixture of oak, oregano, earthiness and black pepper. Flavor is close to medium-full, body is medium and strength is medium.

Somewhere around the halfway mark, the Short Tales Tomo VI appears to have developed a small tear right below the last piece of the cap. It means that I need to be more deliberate about the position of the cigar in my mouth. If my lip covers the hole, smoke production is fine; when I don’t, the smoke production isn’t great. As for the flavor, it’s quite different. A mixture of grains is now the strongest part of the profiled, followed by corn chips, leather, unripe strawberries, and a bit of black pepper. Retrohales are nuttier with secondary flavors of grain bread, creaminess and black pepper. Retrohales finish with multi-grain bread, sourdough bread, grains, kosher salt and a touch of paprika. Flavor is medium-full, body is medium and strength is medium-plus. While I had avoided any touch-ups in the first two thirds, by the time the final third begins I need to correct a slowing smoke production. Profile-wise, it’s earthy with other flavors of pretzels, hay, leather and saltiness. The finish has hay, earthiness, saltiness and oak. Retrohaling is different than before, sometimes dominated by creaminess by other times more of a balanced mixture of plain bagels, oak, kosher salt and a bit of lemon. Flavor is full, body is medium-full and strength is medium-plus.

Sometimes cigars get better with age, other times things don’t go as well. At this stage, the Saga Short Tales: Tomo VI: The Sixth Element: El Tabaco is certainly in the latter. Even without looking at my specific notes from the original review, I can very easily see this is lacking the complexity and richness that I remembered when this cigar first came out. The good news is, there’s still plenty of individual flavors and collective flavor left, so it wouldn’t surprise me if with even more time this cigar finds another good groove. Even if this isn’t my favorite Short Tales: Tomo VI I've smoked, it’s still a good cigar, and shows plenty of life left.