In 2014, Room101 announced a regular release cigar called The Big Payback. The idea was that brand owner Matt Booth wanted to give back to the customers for their loyalty and getting the brand where it was. The Big Payback was the idea, coming in three sizes—two quite large—and all very reasonably priced.

Fast forward two years, and Booth has released a new blend in the series, this time featuring a Connecticut wrapper. Coming in the same three sizes the original blend launched with, prices are slightly higher than the MSRP of the original series, though marginally so and still much cheaper than you would expect to see these priced at. 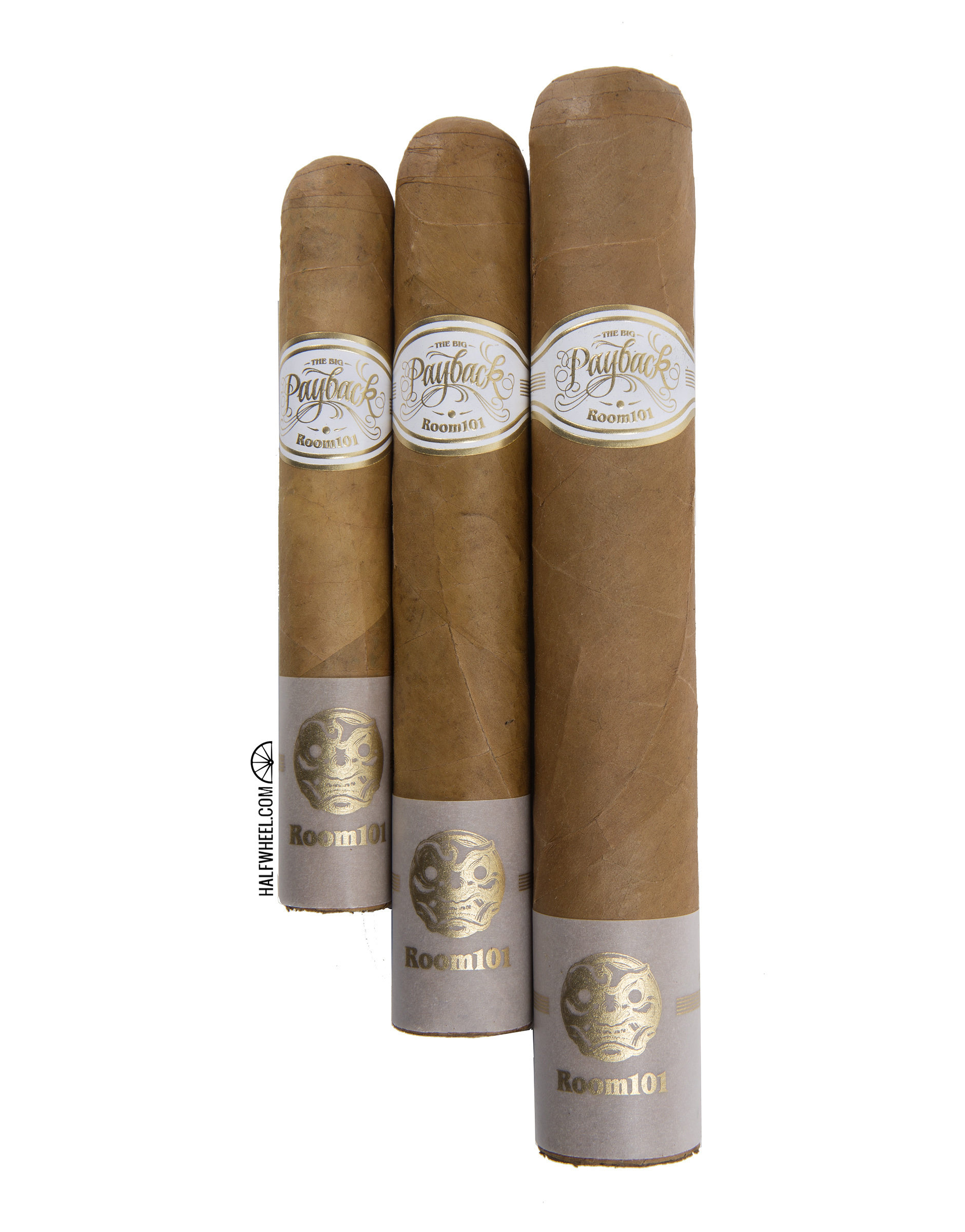 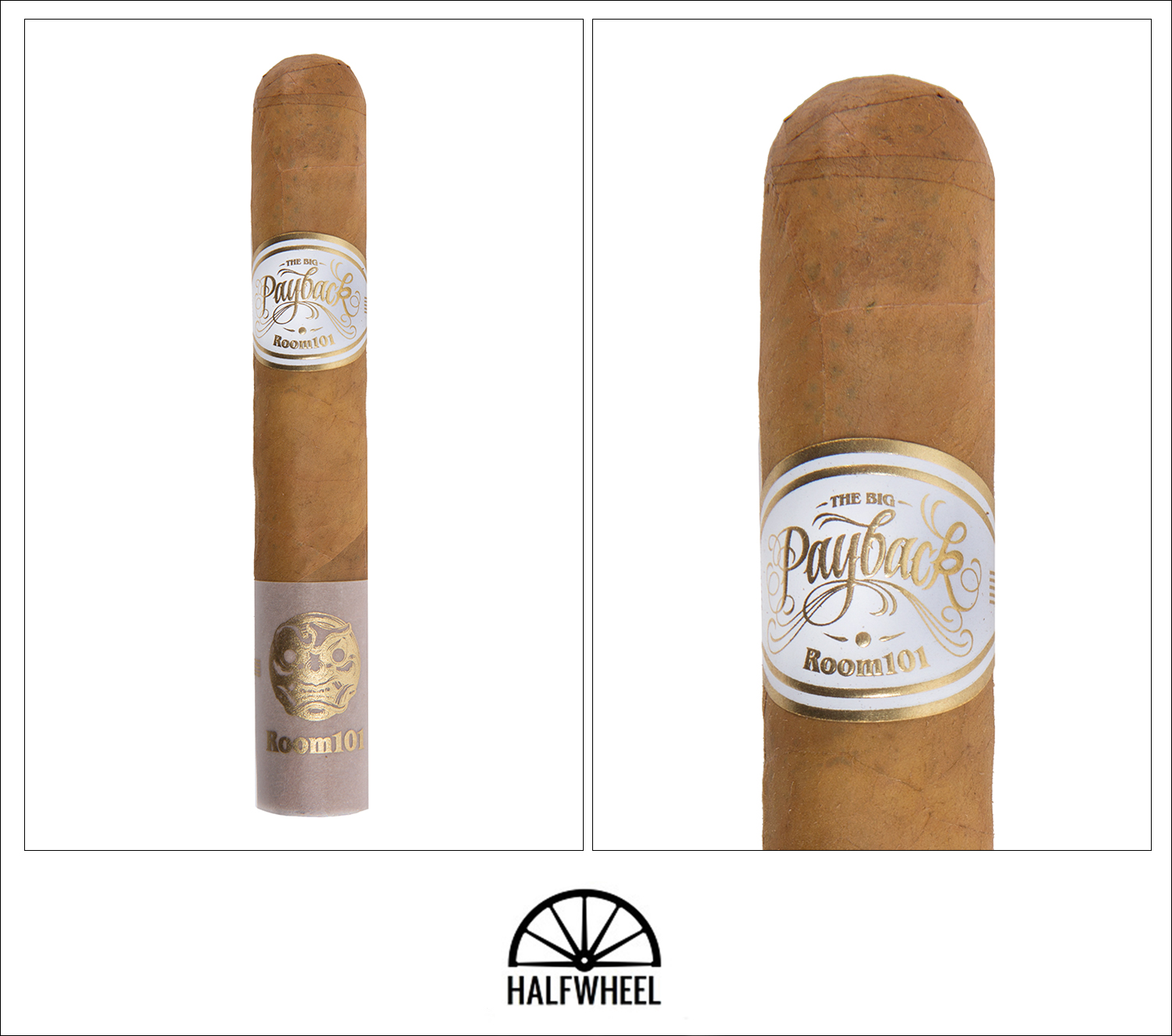 It’s been quite a while since I’ve felt a wrapper this soft and delicate, but the Payback’s light tan Connecticut wrapper is silky smooth and an incredibly pleasing tactile experience. There is some universal give to the cigar, mostly even, though a couple spots seem to have a bit more than others. Fresh hay, dried strawberries, Christmas spices and a touch of watermelon rind make up a very interesting aroma coming off the wrapper. The cold draw is very similar, starting off mostly fruity—almost like the aroma coming out of box of Trix cereal—quickly followed by licorice, graham crackers and a touch of pepper on my lips.

The first third starts out with none of the fruity sweetness from the cold draw, though lots of nuttiness and spices dominate, with a sweet graham cracker following behind. Lighting the cigar in the wind, it wanted to start out with a very ragged burn, but it very quickly corrected itself and is now burning almost razor sharp within a quarter of an inch. The draw is good, slightly on the more open side of the ideal range, but produces plenty of smoke with each puff. As I continue, the big spice note starts to fade slightly, letting the graham cracker and a touch of pepper come forward slightly, while the whole thing is still being led by the nutty note. 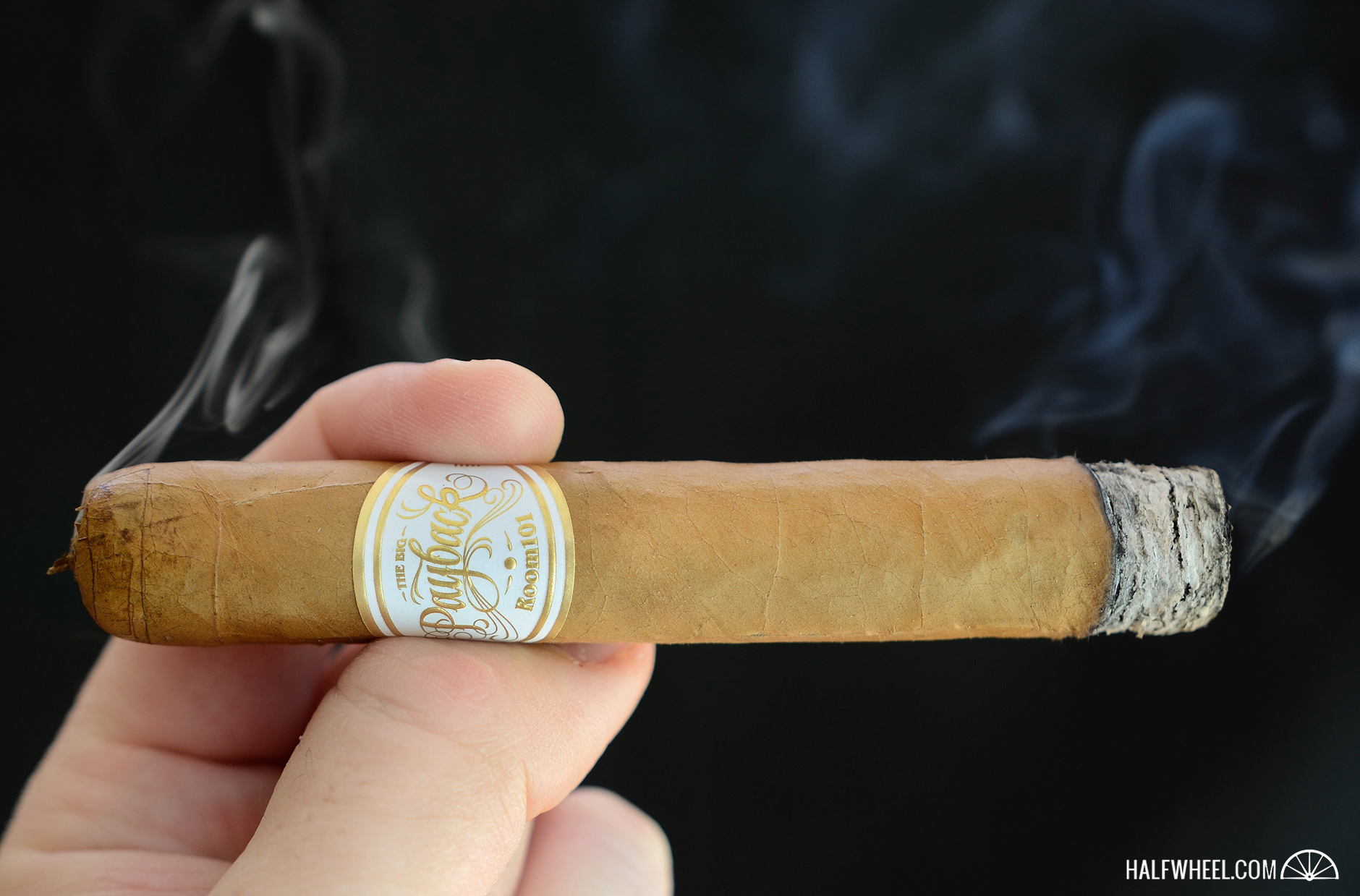 Shifting into the second third, the nutty note has died down some along with the sweetness. Instead a creaminess has shown up, mixing well with the spice, nuts, pepper and a generic cereal note all evenly mixing together. The burn has continued to be impressive, along with some good ash retention, holding on easily to around the inch mark. The creamy profile of spice, nuts, pepper and cereal persists, not really seeing much change or shifting of the flavors through the remaining part of the second third. 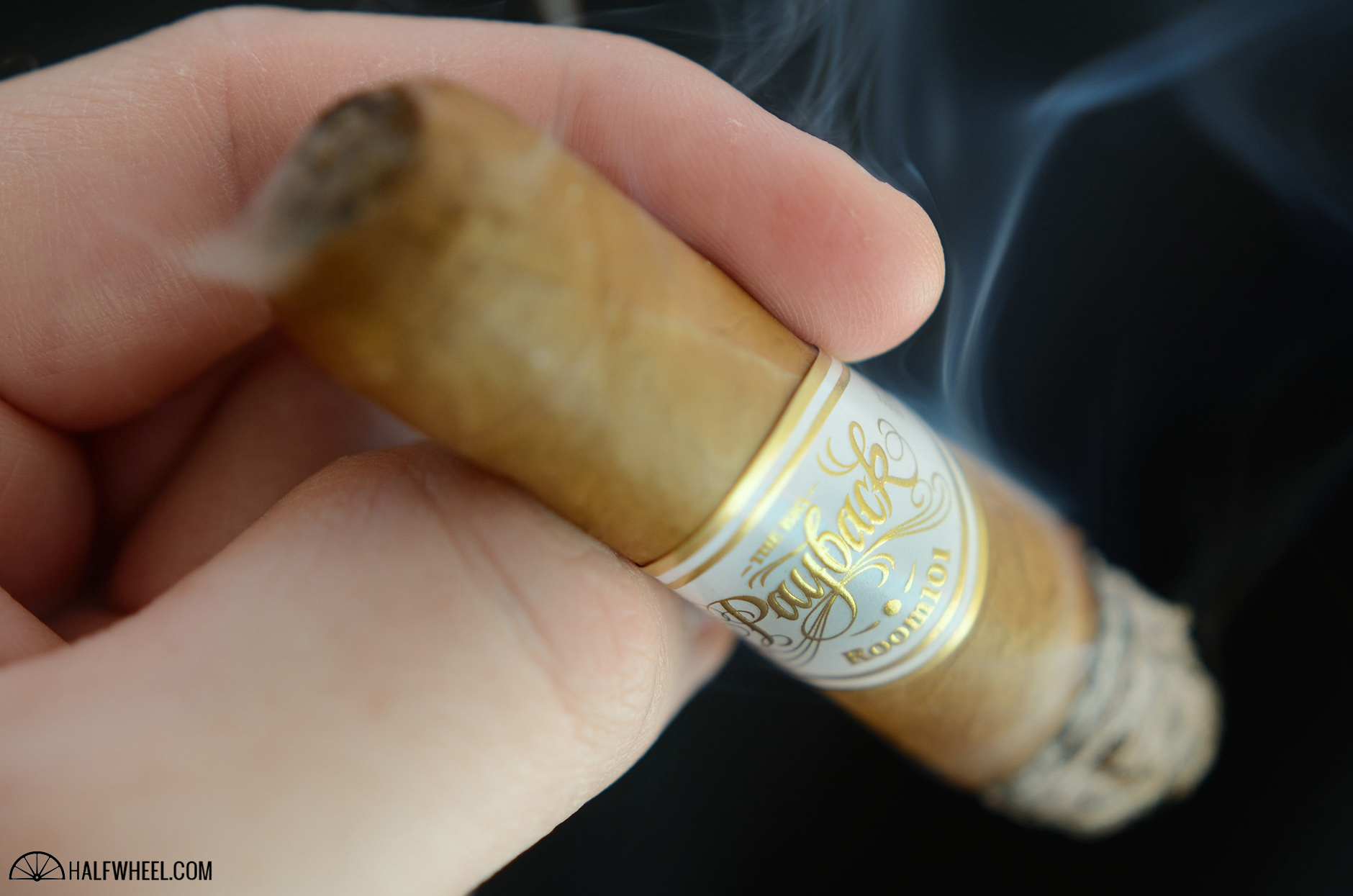 After all the flavor shifts in the first half, I find myself expecting something different moving into the final third of The Big Payback Connecticut, but I’m content to taste the same profile. The pleasant mix of creamy, nutty spices, pepper and cereal makes me wish there was just a little bit more to the ciga as I get closer to the end. While the ash has become slightly flakey, the rest of the construction continues to be impressive with great ash retention and a solid burn line. With just a nub left and my fingers starting to get too warm, I’m pleased that there isn’t any harsh notes or bitter hot smoke, which allows the profile to end in a dignified manner. 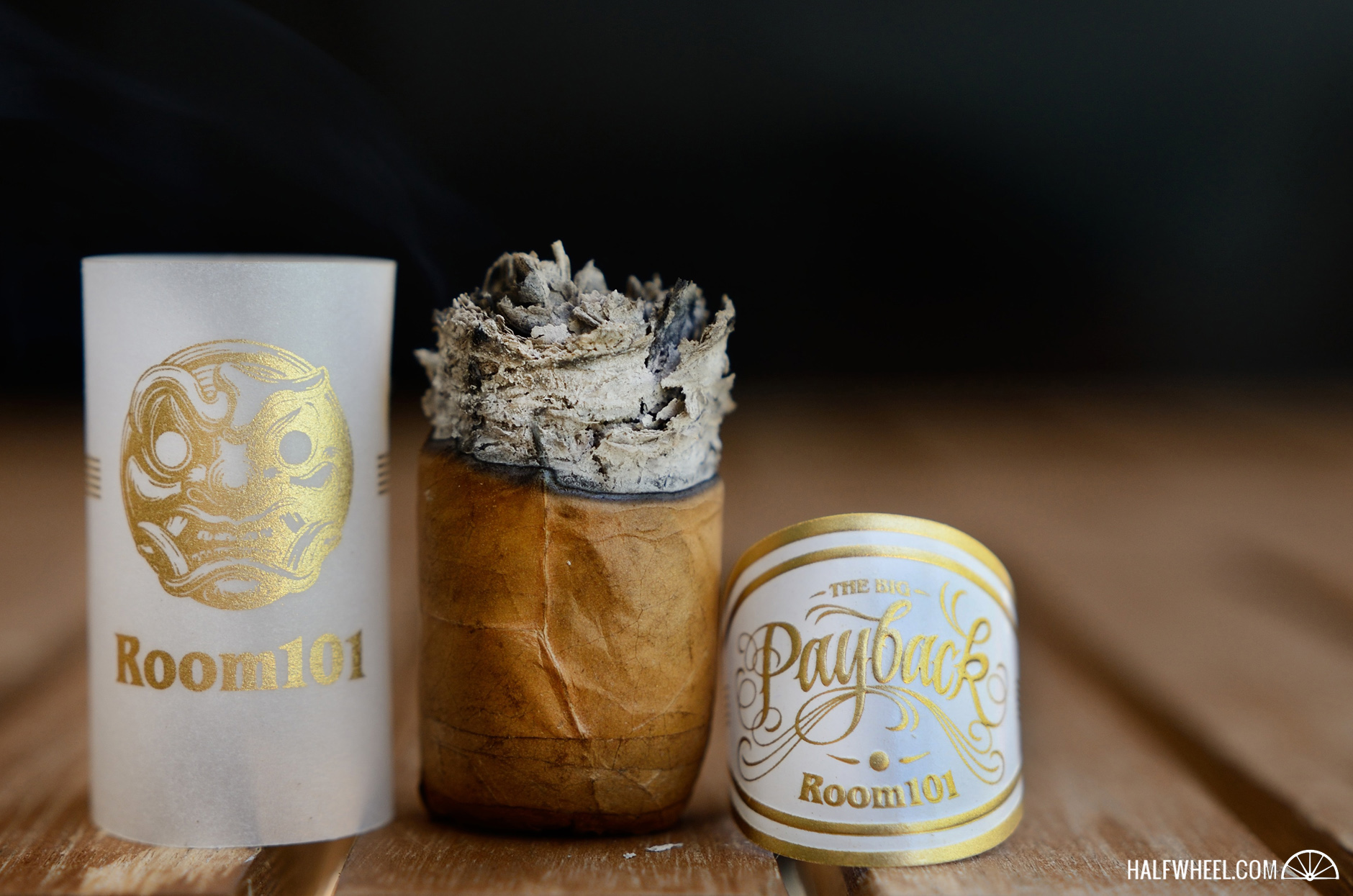 The Room101 The Big Payback Connecticut Chavala hooked me from the start. With a combination of a visually pleasing light wrapper and band combination, the extremely soft and luxurious wrapper and the intriguing aroma coming off the wrapper, I immediately was ready to like this cigar. I’m sure all those things put me in a good mindset to enjoy the cigar, but the fact is that it has to follow up with a good smoking experience. That’s exactly what the Big Payback Connecticut did however, with each sample consistently producing an enjoyable experience from the time I took it out of the cellophane to the time I set the final nub down in my ashtray. With the profile and construction being more than impressive, I can easily say that this is one of my favorite releases I’ve reviewed this year. The great news for you though is not only is this Room101 release going to be readily available all the time, but you’ll also pay a very reasonable price for it too. Consistently good, easily available, and reasonably priced—I think that’s a combination that should make any cigar smoker feel appreciated.