At the 2016 IPCPR Convention & Trade Show, Altadis U.S.A. showed off a new Romeo y Julieta blend that was created by the Grupo de Maestros, Altadis U.S.A.’s executive production team, more than a decade ago. Dubbed the Romeo y Julieta Reserve Rare 11 Years Old, the 5 3/4 x 48 corona gordas were originally rolled at the Flor de Copan factory in Honduras before being being aged for 11 additional years.

“The cigar is crafted by our very own, very patient, Grupo de Maestros who showed incredible restraint by placing them out of sight in our cedar room to age for 11 long years,” said an Altadis spokesperson in a press release. “This act of passion resulted in a work of art rolled in a rich mahogany wrapper with a perfectly balanced aroma profile.” 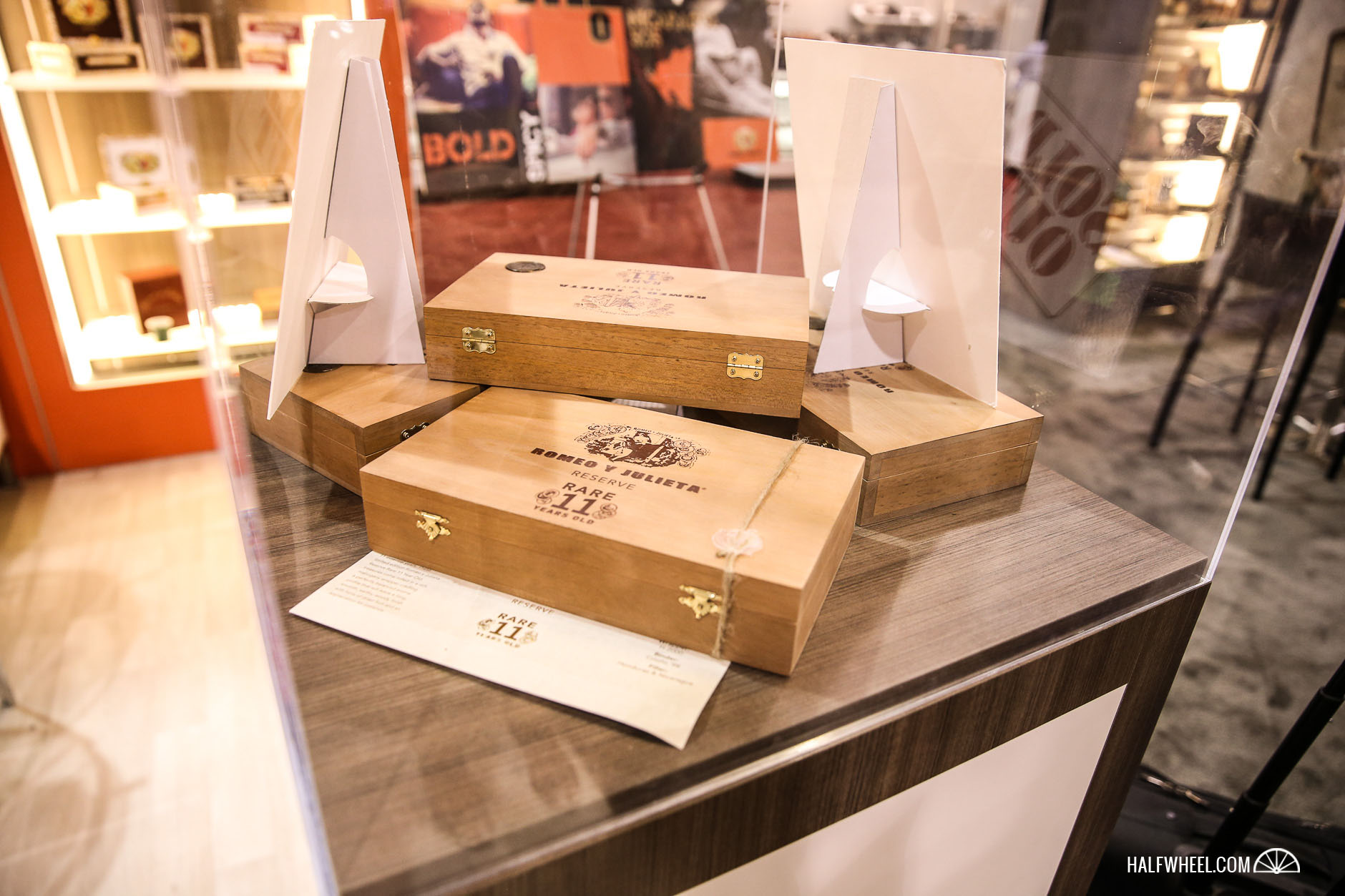 In terms of blend, the Romeo y Julieta Reserve Rare 11 Years Old features a wrapper from Honduras covering a Honduran criollo ’99 binder and filler tobaccos from both Honduras and Nicaragua. Appropriately, the new limited edition is packaged in boxes of 11 with each cigar carrying an MSRP of $11. Only 1,000 boxes were produced. 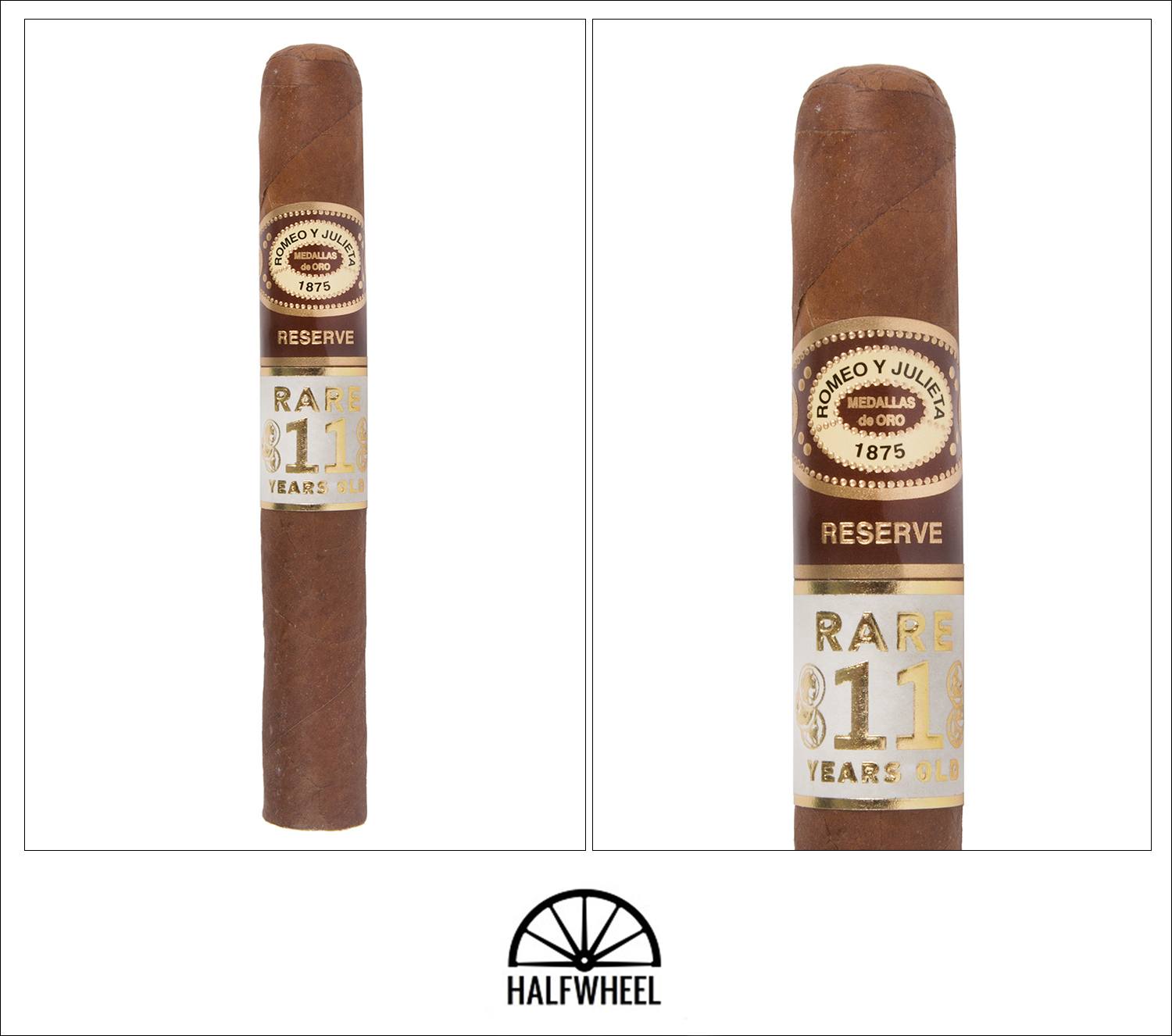 Covered in a mocha brown wrapper, the Romeo y Julieta Reserve Rare 11 Years Old is silky smooth to the touch and features a touch of oil. In addition, it’s appropriately spongy when squeezed and there are a number of obvious viens ruling up and down the length. The aroma coming from the wrapper is quite restrained and features a combination of cedar, cinnamon, barnyard, hay and manure, while the cold draw brings flavors of creamy oak, orange citrus, leather and dark chocolate.

Starting off, the Romeo y Julieta Reserve Rare 11 Years Old features a dominant flavor of mesquite, along with lesser notes of smokey barbecue, leather, ground coffee, tobacco and grass. There is an interesting slightly perfume-like note that makes itself known every once in a while on the retrohale, along with a nice amount of white pepper. The finish is quite dry and the smoke production coming from the foot is above average, thick and white. Construction-wise, the draw features just the right amount of resistance, while the burn is close to razor sharp so far and the strength is not really a factor, barely hitting a point halfway between mild and medium by the end of the first third. The perfume note on the retrohale becomes more aggressive in the second third of the Reserve Rare 11 Years Old, which combines with the flavors of mesquite, leather, tobacco, dark cocoa and coffee. I am picking up a slight generic sweetness every once in a while, and I am also noticing a bit of black pepper on the retrohale, but there is no indication at this point that either flavor is going to increase enough to affect the profile in any significant way. The draw and burn continue to impress, while the smoke production has seemingly increased a little. The overall strength is still quite light, and it fails to hit the medium mark by the end of the second third, although it does seem to be increasing. Although the final third of the Romeo y Julieta Reserve Rare 11 Years Old is virtually identical to the second third, there is one new flavor of cinnamon that joins the already existing notes of leather, mesquite, espresso beans, chocolate and hay. While the sweetness remains in the profile, it is still quite generic and it starts to recede more and more as the final third comes to a close. The overall construction remains a joy to smoke at this point, with a wonderful draw and a close to razor sharp burn line that I don’t even have to think about. As expected, the strength does increase, but not as much as I thought it would, and hits a point close to medium before I put the nub down with less than an inch left. I have to say, the Romeo y Julieta Reserve Rare 11 Years Old was an incredibly difficult cigar to figure out. While there is no doubt that the profile can be nicely complex at times with flavors I don’t taste very often jumping in and out at random, there is also no doubt that the three samples I smoked were  inconsistent: one below average, one decent and the last sample excellent. Two things that were consistent were the construction—which was excellent overall on all three —and the strength, which was well-integrated. In the end, the Romeo y Julieta Reserve Rare 11 Years Old is a very good cigar if you happen to end up with a good sample, but not worth the time or the money if you don’t.