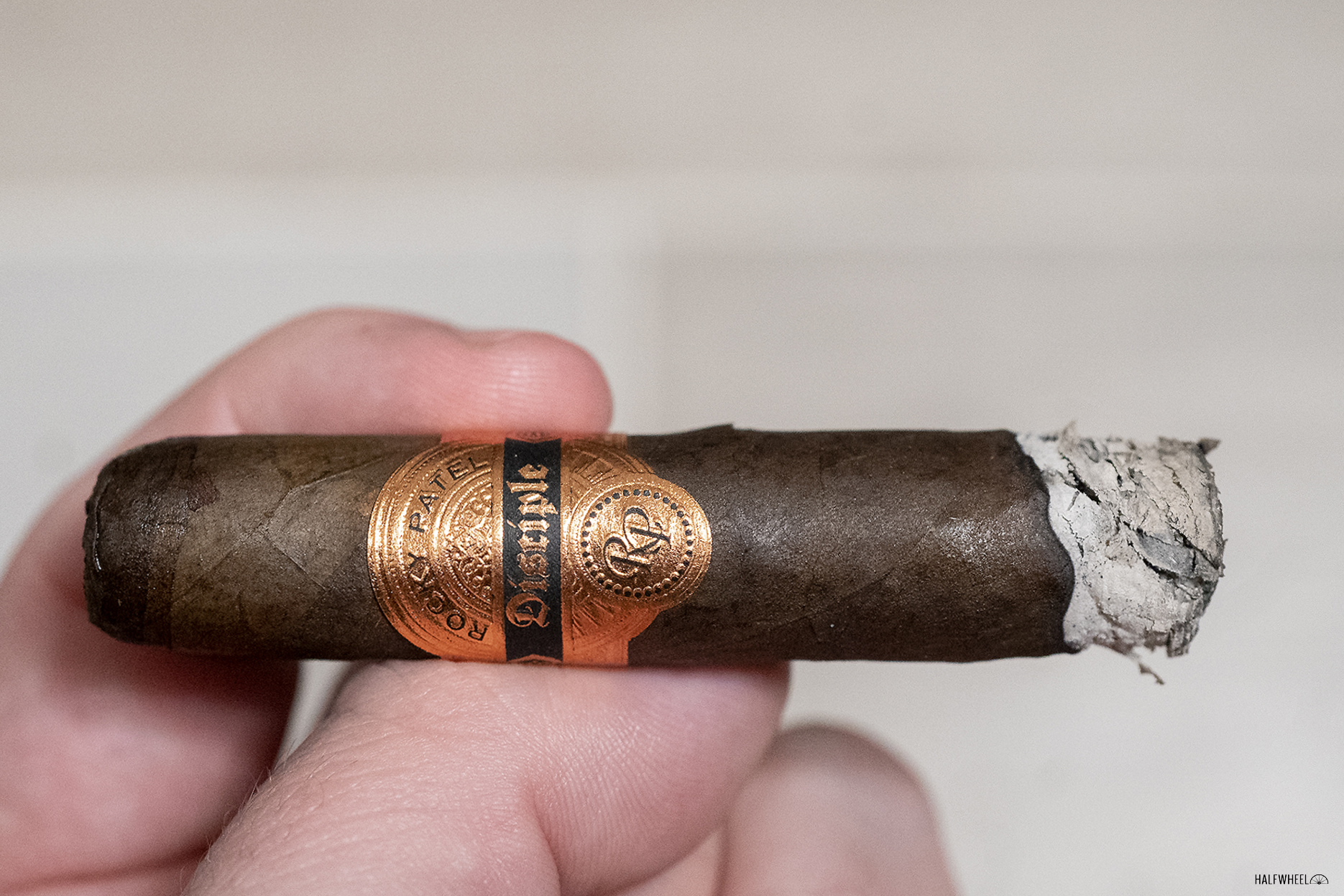 That fifth size is one of the smaller ones you will find in a humidor, a 3 1/2 x 46 half corona. Like the other sizes in the line, it comes in 20-count boxes, features a blend that uses a Mexican San Andrés wrapper over a Nicaraguan binder and filler, and is produced at the Tabacalera Villa Cuba S.A. factory in Estelí, Nicaragua.

With the release of the Half Corona vitola, the Disciple line now sits at five regular production sizes. 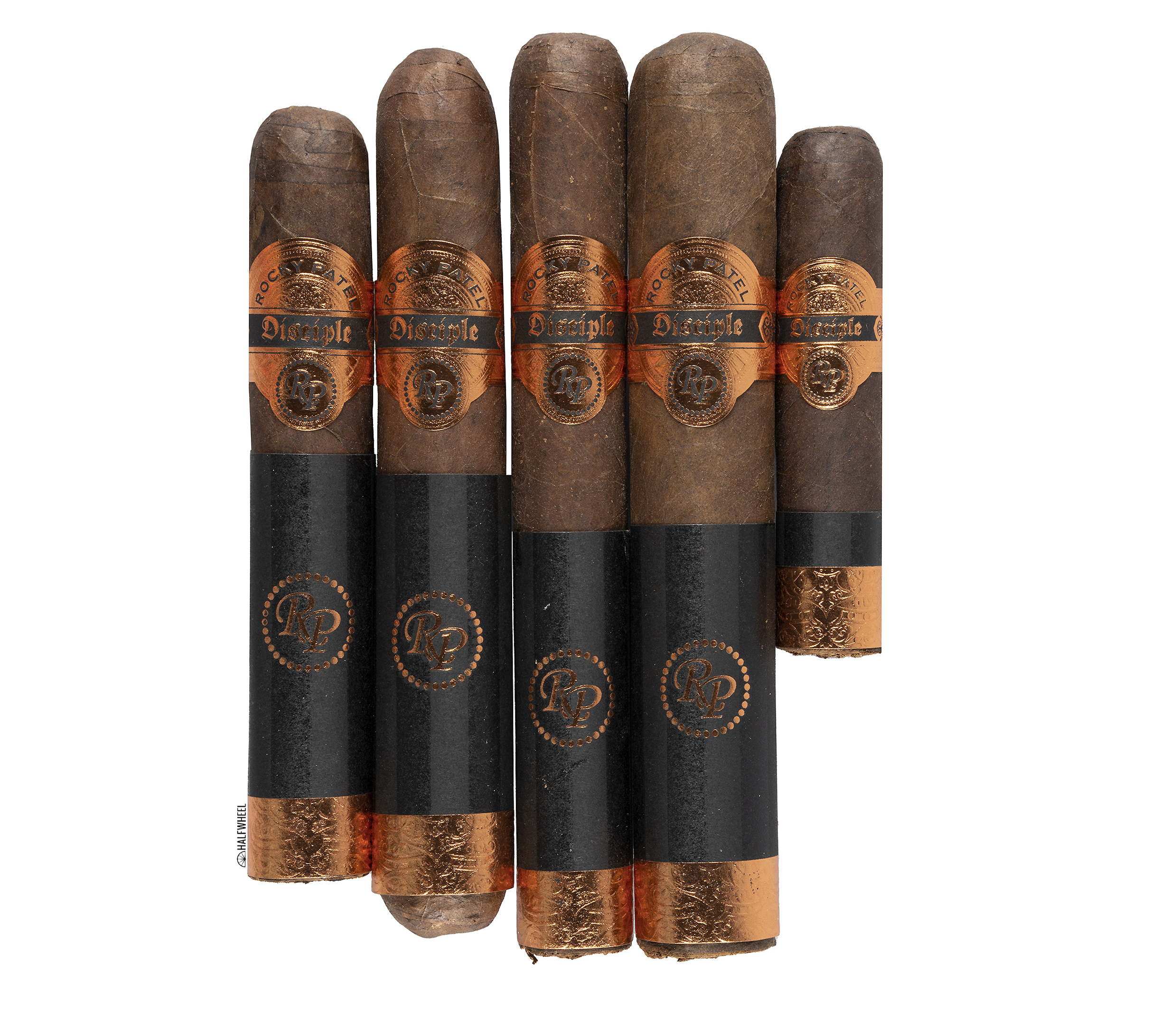 The Rocky Patel Disciple Half Corona has an MSRP of $7 cigar and began shipping in mid-January 2022. 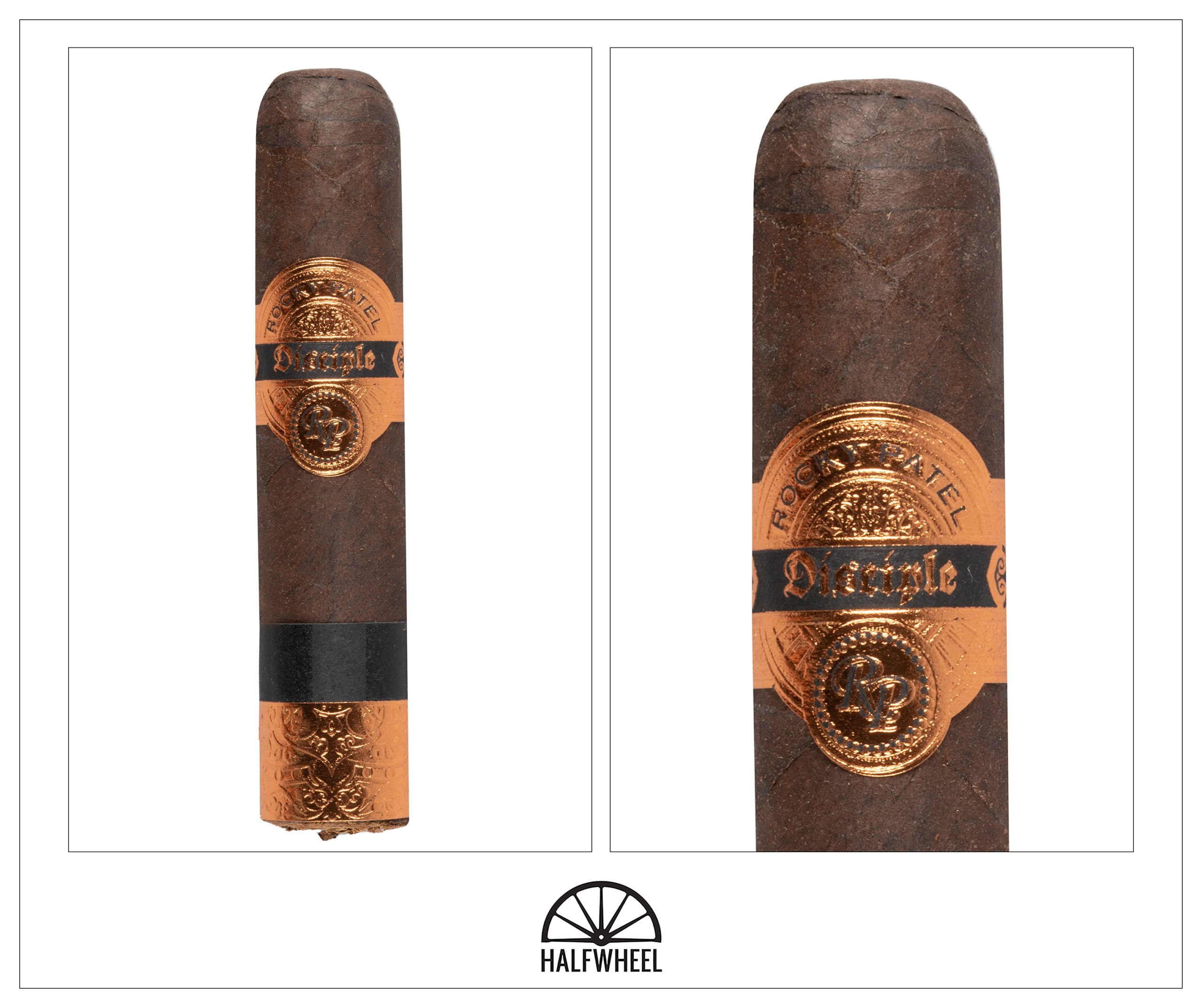 There are small cigars, and then there’s the Rocky Patel Disciple Half Corona, which comes in a vitola that I simply don’t see every day. The wrapper is an impressively dark brown, with a rustic look due to some veins, mottling and the occasional nick in the seam line. It’s dry to the touch and has a bit of fine grit texture, though I don’t see much tooth. The firmness of the three samples varies; one cigar has a bit of give to it, while the other two are quite firm. The aroma from the foot hits me with chocolate first, before bringing in some earth and black pepper, as well as drying out the aroma a bit. It’s an interesting combination that evolves rapidly before settling on a fairly complex smell. The cold draw varies as well; one is quite open and two are fairly firm in terms of air flow, while flavors have a bit of earth but remind me more of a Ritz cracker at first. There’s a bit of chocolate milk providing sweetness and creaminess, but I don’t pick up a ton of pepper.

The first puffs of the Rocky Patel Disciple Half Corona definitely feels like starting a cigar at the point where I would begin thinking about the home stretch of an actual corona, at least from a visual and physical feel perspective. The flavor is on the dry side, with a bit of woodiness and black pepper, yet there are a few puffs among the samples where a bit of damp cedar changes that profile for the better. There is one sample that starts with a dry earth that has a bit of bite to it; regardless of the specifics the cigar doesn’t ease into things yet doesn’t start with a bang. Given the short length and quick transitions, the cigar doesn’t have a lot of time or tobacco to work with, so I don’t find a lot of pronounced transitions. What I do find, though, is a very enjoyable white pepper in retrohales, even if it is a bit  pointed. The final puffs of this section, which come about fairly quickly given the vitola’s short length, get quite dry and leave a lingering pepper finish on my tongue. The draw varies from sample to sample, but combustion and construction are both fine. Flavor is medium-plus, body is medium, and strength is medium-minus.

The flavor at the start of the second third of the Rocky Patel Disciple Half Corona is still dry but a bit fuller in body and flavor. There are a few puffs that remind me of light coffee or even espresso, though with very little of the acidity that often accompanies that flavor. I find some sort of sweetness beginning to emerge, though I can’t quite place it other than to say that since it comes out of the coffee flavor, it has me thinking of coffee-flavored candy or ice cream, minus the creaminess of the latter. It doesn’t stick around very long as the profile returns to earth and black pepper, while retrohales have a bit more of an aromatic aspect that I can’t quite place, while the pepper is getting brighter and crisper in the nostrils than it had been earlier. The cigar is still burning very well, giving off plenty of smoke and maintaining an even burn line. Flavor is medium, body is medium, and strength feels a bit shy of medium. 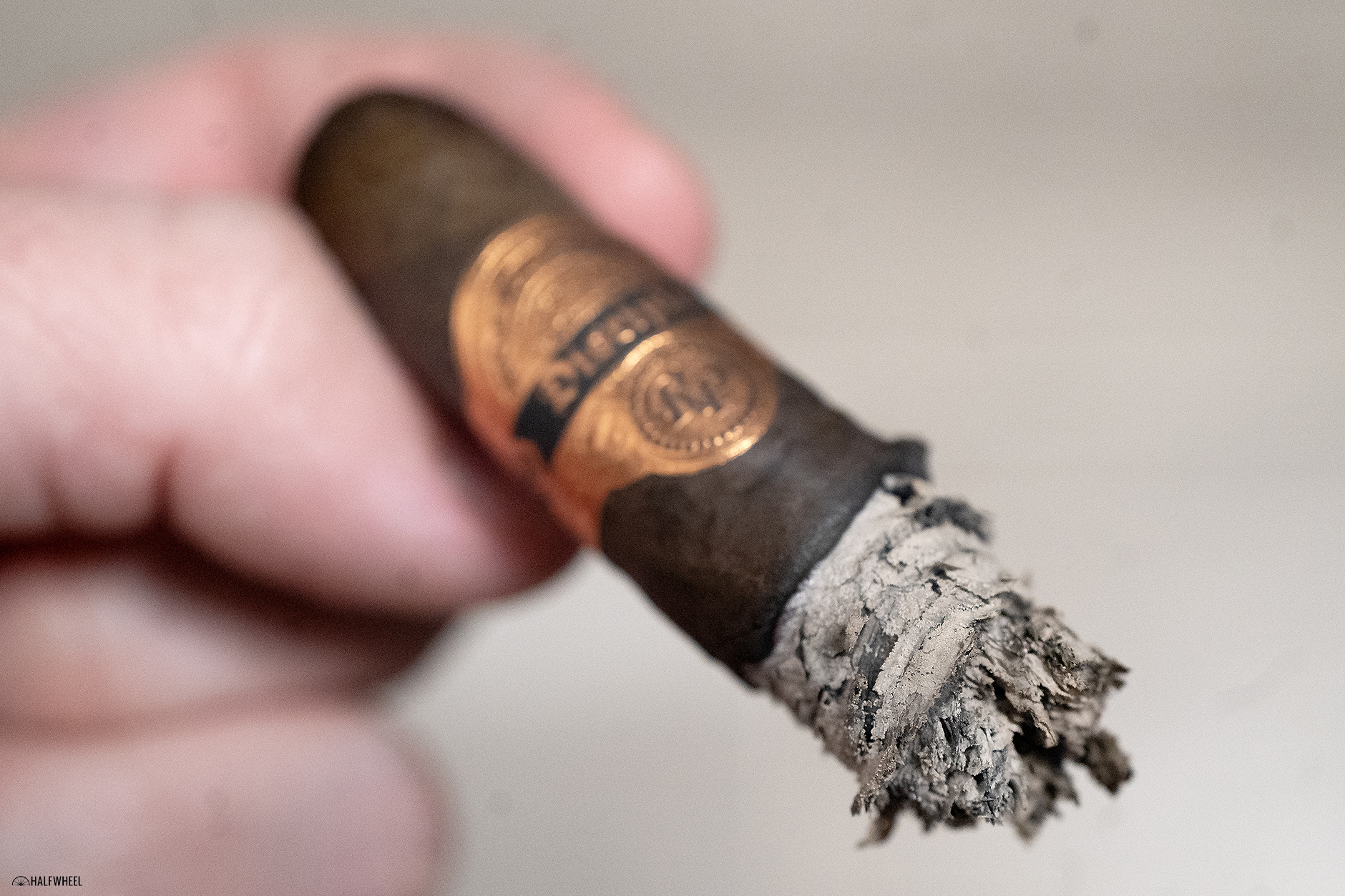 The final third of the Rocky Patel Disciple Half Corona starts off with a much more assertive profile that packs some heat and bite. The earth lightens up a bit, picking up a touch of chalk before heat becomes a factor in the profile and forces me to slow the puffing rate down a bit. In one sample, it feels like the heat has pushed the profile past a point where it can be brought back, as minerals join in and have me thinking about putting the cigar down. The change doesn’t have quite the same effect on the retrohales, meaning I can get a few more of those before it’s time to put the cigar down. Thanks to the heat, the flavor ramps up to medium-full, body is medium, and strength is medium. Construction and combustion both remain near flawless, though the final third does seem to necessitate finding a new puffing rate in order to balance combustion and the profile from getting too hot. 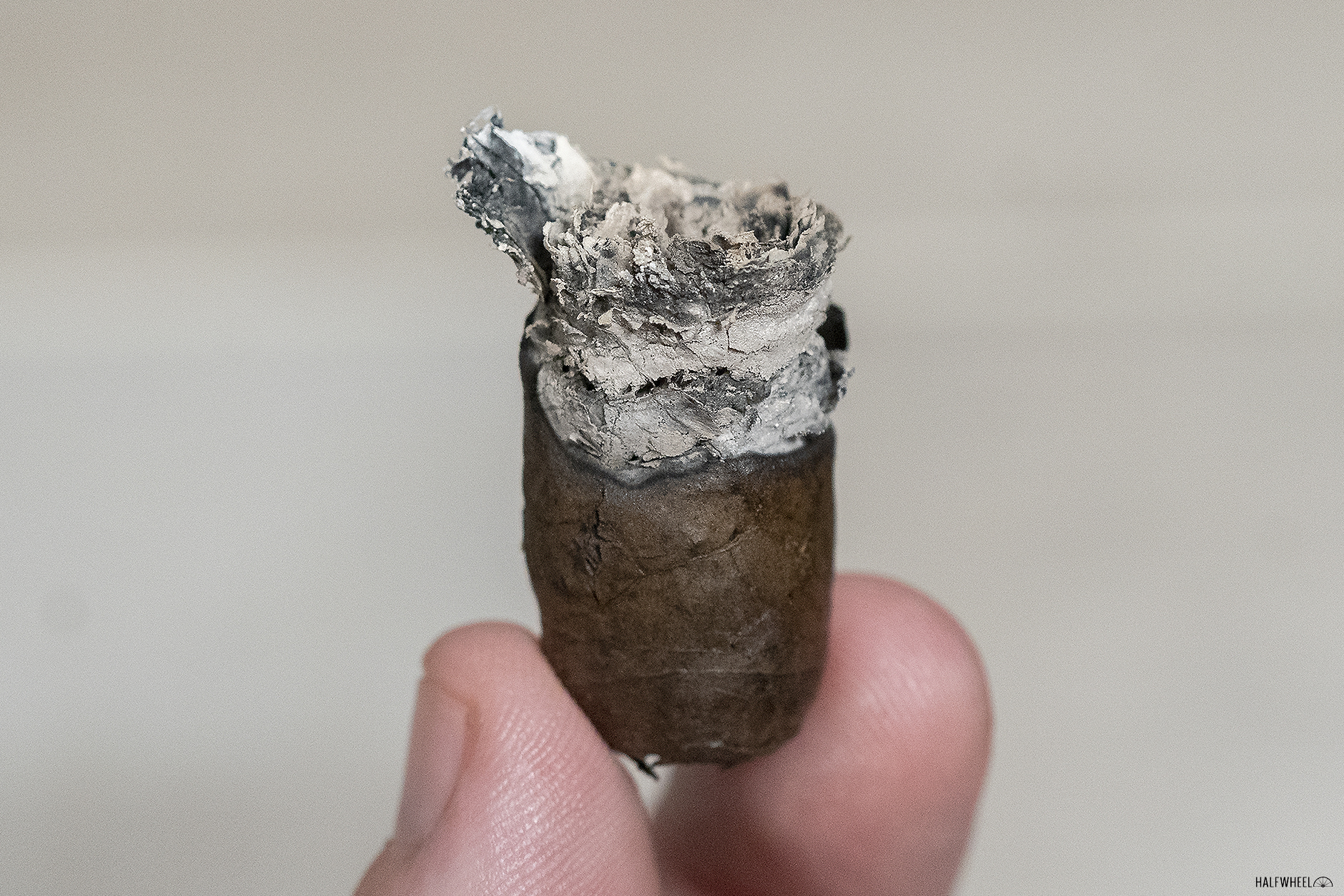 If you’ve smoked other vitolas of the Rocky Patel Disciple blend, the Half Corona is a decent yet somewhat incomplete representation of that blend, something I have to attribute to its size. While it provides an impressive smoking time—though one I would imagine would be shorter if smoked for enjoyment and not the purposes of a review—its compact vitola limits just how much canvas the tobacco has to paint on. The other downside of the cigar is that the small size isn’t seemingly congruent with the pitch to smoke it in a shorter time frame, as the final third can really be adversely effected by heat from quicker puffs. Again, if you like the blend but want it in a shorter format, the Rocky Patel Disciple Half Corona is a good option, but I think the better experience of the blend is found in the bigger sizes.