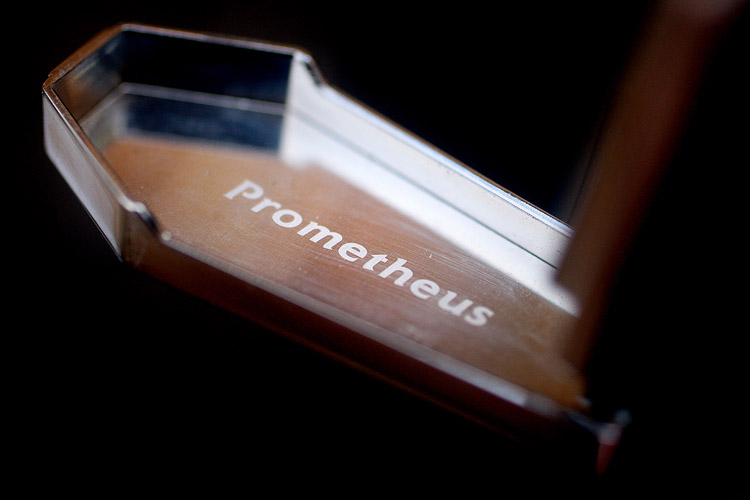 (Editor’s Note: This is the first halfwheel accessory review, you can find out more about what’s to come here.) 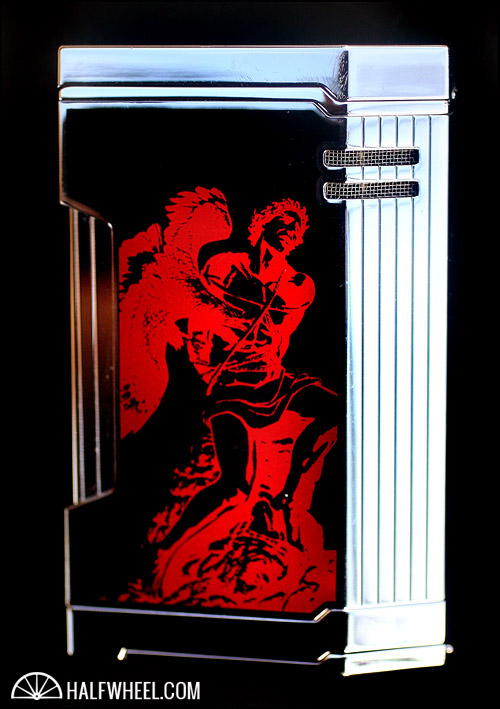 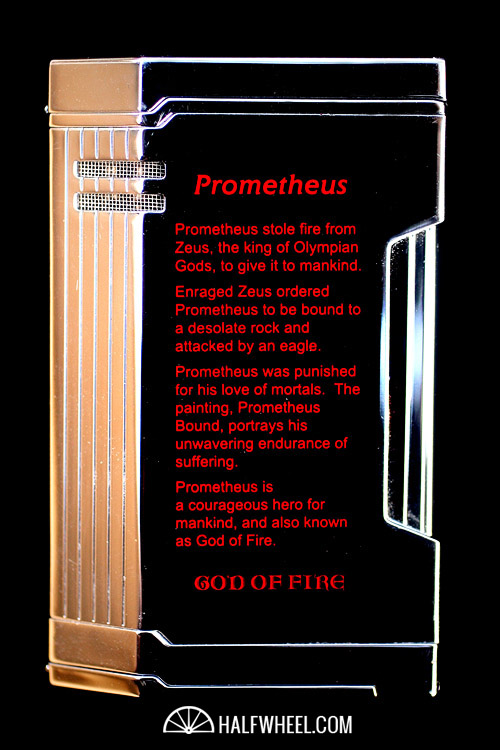 Out of the box, the Magma T isn’t terribly difficult to figure out. There’s a basic flip top that reveals the triple flame burners and ignition comes from the side lever. At the front there’s a fuel window, which actually displays fuel in blue, which is very helpful. Below is the flame adjustment, refill nozzle and two different sizes punch cutters, which swing out from below. On this particular version the artwork is the God of Fire logo and the back features the story of Prometheus. It should be noted, that the 2010 God of Fire Magma T is the exact same lighter with the black and red switching places. 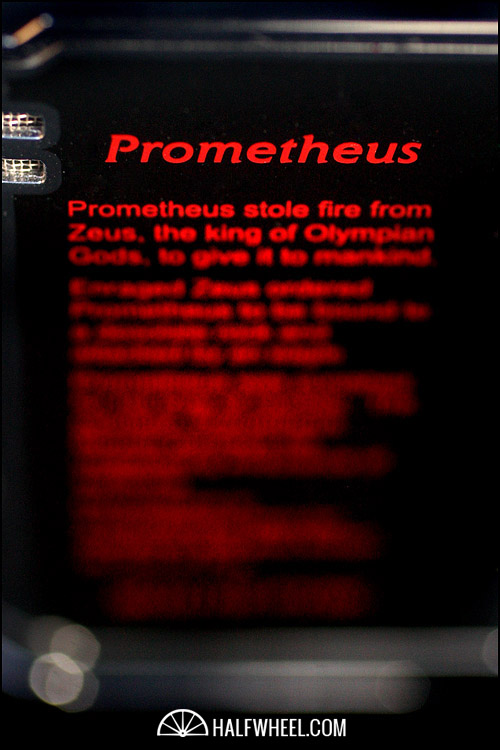 The Magma T is a bit over three and half inches tall, nearly three inches long and and less than an inch wide making it par for the course amongst other table lighters. I will say, the overall weight of the lighter is a bit less than you’d think, but it’s still has a decent weight. The size is perfect for the hand, and while it’s a table lighter, the Magma T fits fine in jacket pockets. The overall shape is interesting, particularly the lid, which looks like a coffin. (See below.) 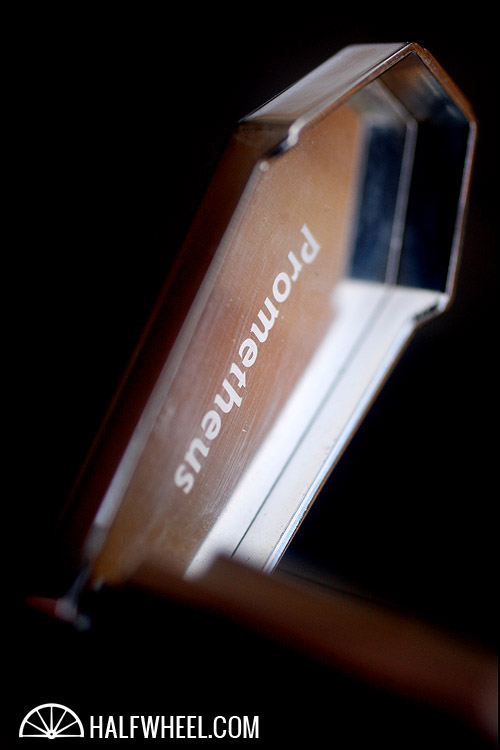 Performance-wise, I tried my best to use the lighter as much as possible for the course of the two plus months that I’ve had it. After three refills, the lighter still lights up every time and puts out a consistent triple flame. With multi-flame lighters, this is really crucial as so many times the flames are uneven, which largely defeats the purpose. I don’t normally use a punch, but the cutter worked fine the two times I used it. The two sizes are nice, as it gives you the ability to punch anywhere from 44-60 RG with a hole that is appropriate for the size. 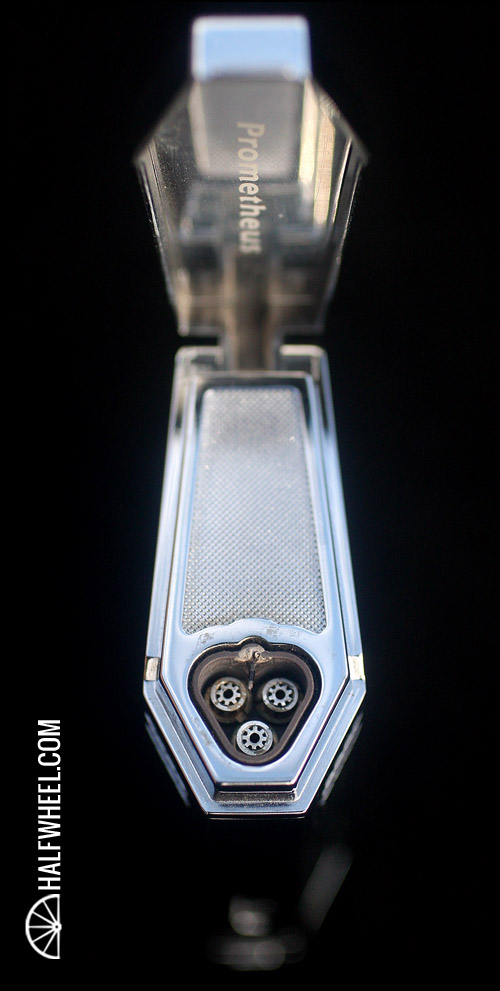 XIKAR announced the XTX Tabletop lighter at IPCPR 2011. It’s priced identical to the limited edition versions of Prometheus’ lighter and features a single side ignition, as opposed to the dual ignition found on its normal Tabletop lighter. The XTX doesn’t feature a cutter, but features an angular flame that seeks to add more precision versus a standard triple flame. XIKAR’s Tabletop lighter is priced similar, but features dual ignition and a traditional triple flame that is similar to the Magma T. Both XIKAR models feature lids that open and close automatically. Vector’s Thundra lighter, which sells for $50.00 features a traditional lid and triple flame, but uses a thumb ignition at the top of the lighter and doesn’t feature a cutter. While I’ve yet to see a Magma T that has gone through a year of use, I haven’t been impressed with the Tabletop and other multi-flame lighters from XIKAR as the flames seem to become uneven after only a few months of use. Still, that’s why XIKAR has a lifetime warranty. Prometheus has a two-year warranty and is known to fix items after the period for a $25.00 service fee.

I like the Magma T. For $89.95 (the regular versions are $79.95), I’m not sure if this is the greatest use of money, but like many others, I enjoy cigar accessories. While I’m a firm believer in the greatness of the single flame lighter, I actually found myself using the Magma T a lot more than I had thought. Outside of the price, it’s hard to fault the Magma T for anything that is specific to the Prometheus lighter, as most of my gripes with it are with lighters, or more importantly multi-flame lighters, in general. In the most important category, the consistency and evenness of the flame, the Magma T performed as good as any lighter could. All things considered, and compared to the competition, I don’t see any reason not to purchase the Magma T if you are looking for a table lighter.

If you are looking to purchase the God of Fire Magma T 2011, site sponsor Tobacco Grove has them available here.