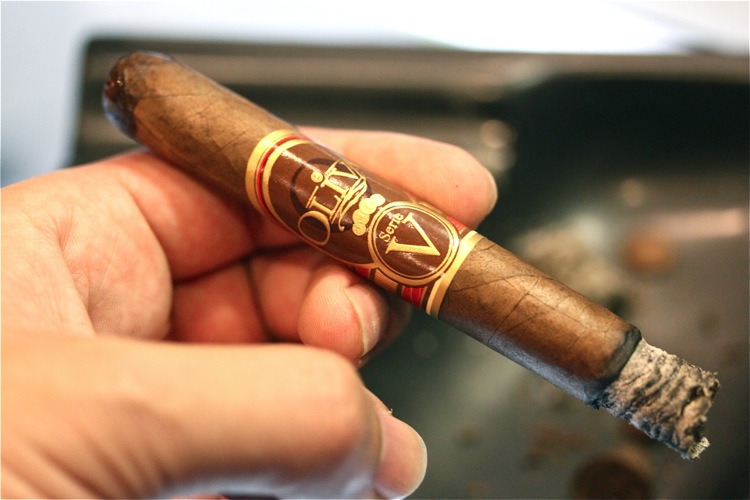 I like the Serie V and I like Lanceros. Put the two together and we should get a real winner, right? Until last year’s arrival of Studio Tobac’s Cain F Lancero, the Serie V was the only Lancero vitola in Oliva’s line, which is saying something given the company’s almost sixteen years in existence. 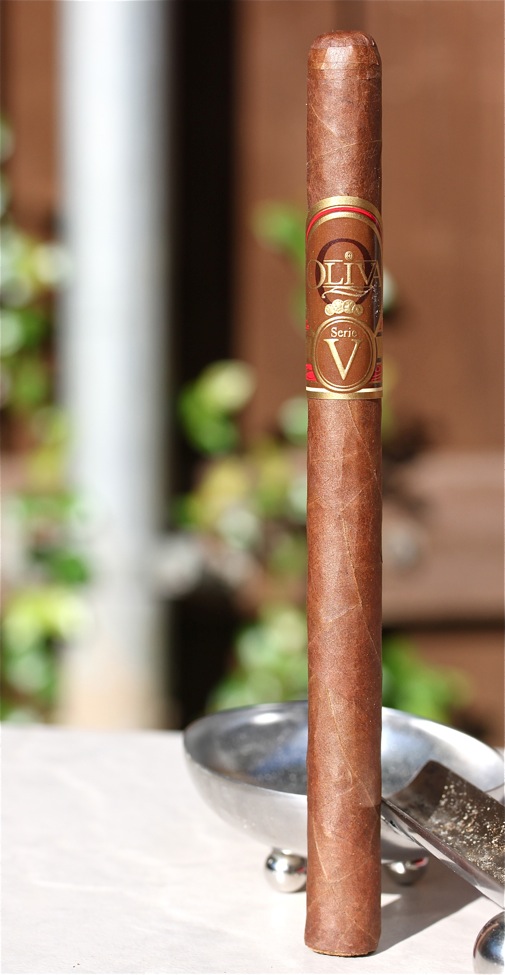 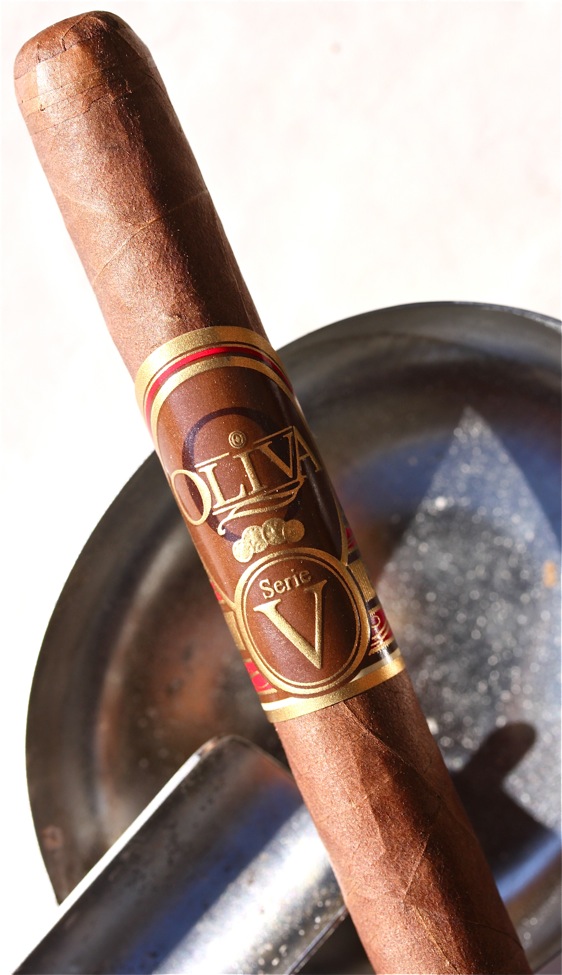 Today’s Smoke
Since I have been doing the line history in a few other reviews, why not do it with one of my favorite lines from the company I claim to be a fan boi of… I’m pretty sure that even if we polled the Oliva reps on how many Serie V formats there were, a handful would answer the question wrong. (If you ansewered seven, you are a bit off…) That’s because, in addition to the Serie V Maduro, there have been a bunch of limited releases. The full line, to my knowledge is:

So if you answered thirteen, give yourself a sticker. The Serie V Maduro Especial has ranged in its Torpedo size, just for kicks, here you go:

José Oliva is quoted by Cigar Aficionado on his Serie V Lancero:

The wrapper-to-filler ratio is so much in favor of the wrapper that it really has to be able to stand on its own, which is why we made one for the Serie V. The wrapper is so unique and rich that we created a lancero so that people had a chance to really taste it.

We made it for connoisseurs and for ourselves… We are not worried about the numbers.

The Habano Sungrown wrapper seems to have a lighter shade than most the other Serie Vs in my humidors, almost a dark caramel color. Veins are light, but easily visible, not that criticizing the beauty of the wrapper is really something worth doing. Aroma from the wrapper is a medium-full mixture of leather, cocoa and herbs; nothing spectacular and not as full as some of the other Serie Vs I’ve become accustomed to. It’s a consistent clean roll that looks incredibly identical stick to stick with a firmness is about as average as far as Lanceros go, just a bit of resistance. The foot is a full mixture of herbs, spice, leather and pepper; clean, yet not smooth. 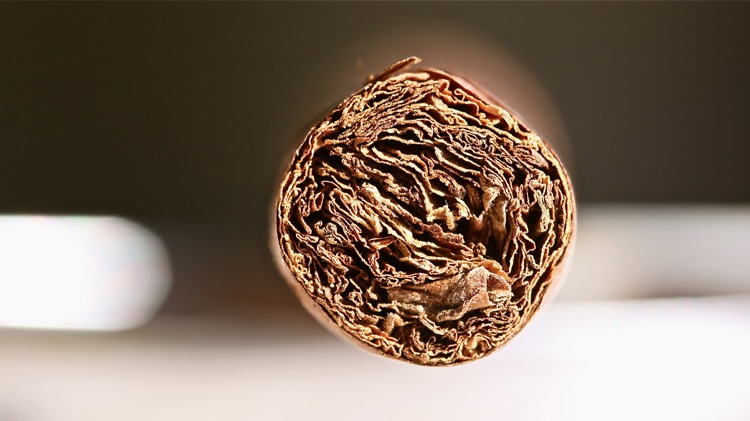 Lighting
It’s missing a half inch off the traditional El Laguito No. 1 length and has a rare (for a Lancero) round cap. A straight cut via the Montecristo Signature Cutter reveals coffee, leather and cocoa with spices sneaking into the full aroma. Cold draw is classic Oliva V with cocoa, leather and spices with a bit of plum overtop and vanilla underneath. While I don’t get much time to spend with the lighting aroma this instance given my indoor location, I’ve smoked close to a box of these and it’s normally sweet cedar, a bit of cocoa, spice and earth. The initial draw is tight with a dose of cedar that transitions into a cedar and cocoa mixture with a lengthy spicy cocoa and earthy finish. 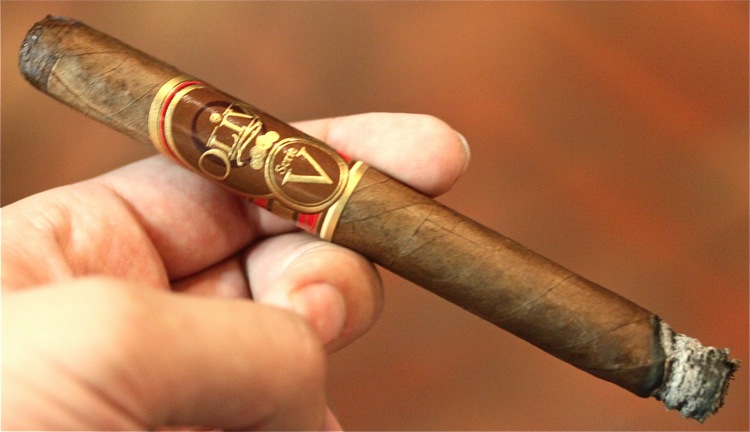 First Third
The most classic portion of the Serie V flavor profile is the initial third. It’s medium-full with toastiness and leather over cocoa and dry woods at medium-full. A finish of a sweeter cocoa and cedar mixture ends with herbs, also medium-full and about average in length. Draw is tight, but there is still a generous portion of dark cocoa aroma from the smoke production. 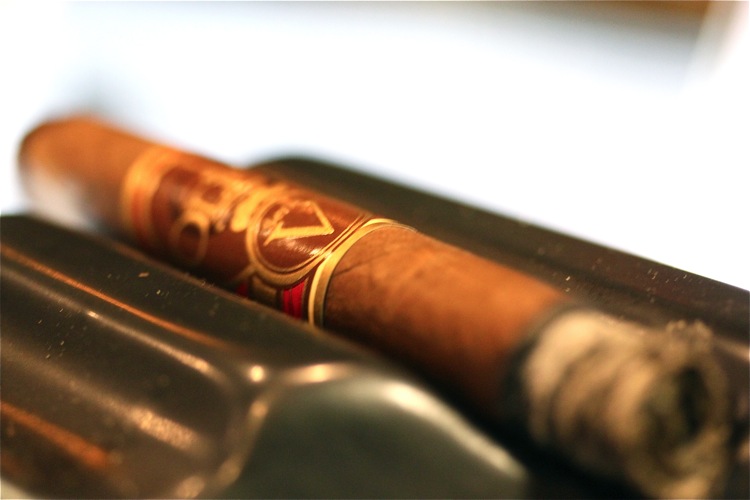 Second Third
Unlike the other Serie V formats, which I really believe just shuffle flavors back and forth, the Lancero seems to have an added complexity. The middle portion exhibits a meaty earth over the classic cedar and cocoa with a much bitter note. Finish is earth over cocoa and cedar, once again medium-full and about average in lengthy. Strength, like the first third is around full, just shy of being definitively in that category. Aroma changes to a more cedar note, but is still good even with what is normally a tight draw. I can get the medium-dark ash to hold to two inches, but an inch and a half seems more comfortable. 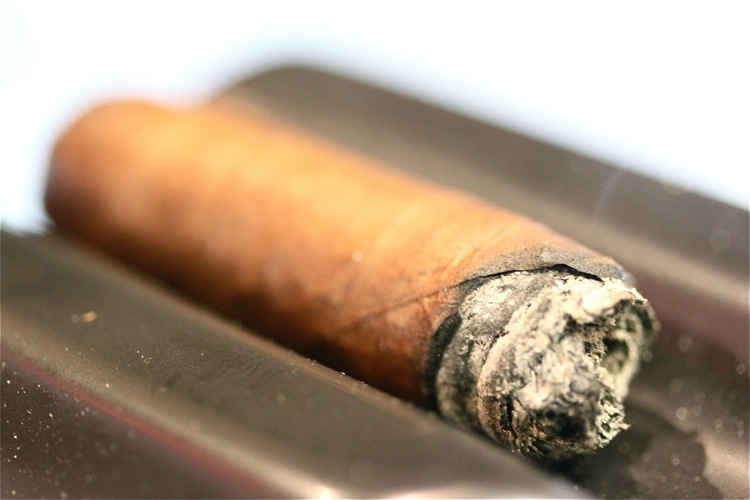 Final Third
Transition complete, toastiness and herbs dominate over earth and cocoa, still at medium-full. The finish is essentially an extension of the initial flavor, herbs and toastiness over cocoa; medium-full and average length-wise. It leaves a bit more to be desired, although occasionally I have had a few that take on a real pepper note, albeit not of late for whatever reason. Sometimes draw tools are needed, but most the time I get by to the end without the poker, despite the constant tight draw. As the clock nears two hours, the Serie V gets set down, usually with less than an inch left.

For the Novice
Everyone has a unicorn. There’s always one cigar that just hits you personally harder than it should. For me, the Oliva Serie V is that cigar. Perhaps it’s the mental stigma from being reminded of when the Serie V Churchill Extra put me on my ass when I was first beginning? Who knows. Whatever the case, the Serie V for me is always a stronger cigar than it is for most, yet I really enjoy them. Even without my predisposition or special circumstances, this is the last line that is branded as a regular Oliva line for a new smoker, given the doses of nicotine are at their lightest, medium-full. 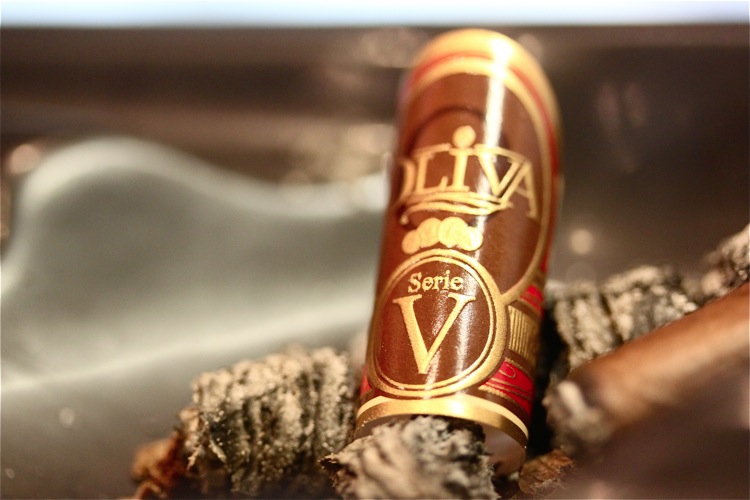 In the End
For site historians, some will point this is one of three Lanceros I originally reviewed almost a year ago, good look finding that review. (For the record, despite the bad pictures above, those are still way worse.) I haven’t had all thirteen Liga Especials, but of those that I have had (all of the regular line plus a few of the limited editions), this and the Special V can fight it out as my least favorite. That’s right, there’s a 6 x 60 that I prefer over a Lancero, flavor-wise. For me, my aversion to the Special V has to do with the natured for them to be plugged, the only problem I’ve had with Tabolisa’s consistency, whereas the Lancero is all about flavor. Much like the Liga Privada L40 (Review: Here & Here), the Oliva Serie V Liga Especial Lancero is a good cigar, just not in my opinion a good Serie V. The Churchill Extra has long been my favorite Serie V, and the outstanding buffet of cedar, cocoa, coffee and pepper that make it great are noticeably missing on the thinner rendition of a seven-inch cigar. Flavor is good, and perhaps even a bit more complex, but it’s not the oozing of flavors with incredible smoothness that has made the Serie V a ferocious competitor to Oliva’s Nicaraguan neighbors, the Padrón family.

85. It has its place in my Lancero rotation, and I suppose that says something, even if it’s still not the Serie V Lancero I had hoped for.