Today we’re looking at the second release in the La Palina Goldie line, the Laguito No.5. Last year La Palina debuted the Goldie line with the Laguito No.2 Petite Lancero which was well received. Not only did it place in halfwheel’s Top 25 cigars of 2012, but it was 12th on the Consensus 2012.

While the blend is always going to be a key element in the cigar, it’s easy to say that good construction is high up in importance as well. La Palina assured the Goldie line’s careful handling by having master roller Maria Sierra exclusively roll every single one of the cigars released. Brooks noted Sierra’s background and achievements in his review of the Laguito No.2:

This year the La Palina moves to a significantly different size with the Goldie Laguito No.5. Patrick Lagreid published some of the first details regarding the cigars in January, while a press release covered the details as its May Release at the Nat Sherman Townhouse neared.

Here is a picture of the two cigars side-by-side: 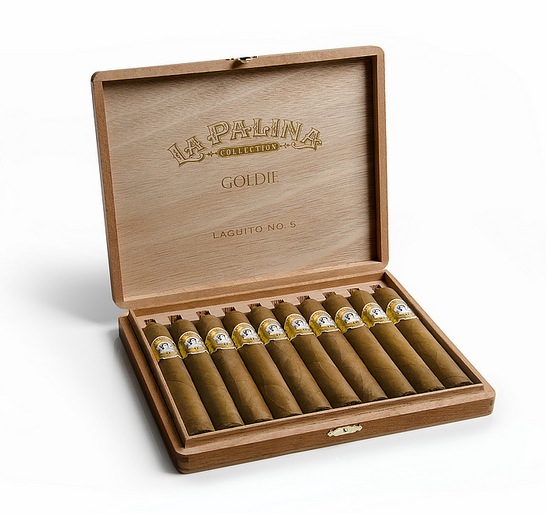 *The initial release was limited to 1,000 boxes. Another 1,500 boxes are scheduled to be released sometime in August.

The first thing you notice about the cigar when you pick it up is the beautifully soft, almond-colored wrapper. It doesn’t seem very delicate to the touch, but the foot has a couple of splits in the wrapper making me think it might be. A quick squeeze reveals the cigar is very firm without being hard. The twisted fan cap is one of the great little details I love to see on cigars that doesn’t change how the cigar smokes at all, yet gives you the sense that the little details matter when the cigar was rolled. The aroma coming off the wrapper is so incredibly mild that all I can pick up are the slightest bits of hay notes, however the aroma coming off the foot is a fantastic fruity hay mix that is extremely unique. Notes I’m getting from the cold draw is a great mix of sweet dried fruits and a mild grassy/hay note. The cold draw again reminds me of how soft the wrapper is and feels like silk against my lips.

Starting out, the first third is bringing sweet and creamy notes of the aforementioned dried fruits, a slight nuttiness and pleasant mild spice. The draw is great and the smoke production is medium to heavy. That, combined with the stark white and grey speckled ash holding easily to an inch and a excellent burn line, speaks to the construction of this cigar and how it is nothing less than perfect. While the overall profile is flavorful, yet mild, the slight bit of spice on the tongue belies an almost overwhelmingly strong white pepper note on the retrohale. The second third continues with the sweet and creamy profile that includes the dried fruit notes, though the nuttiness has faded and a light roast coffee bean note has started to develop. The flavor profile is relaxing and different indistinguishable background notes make up what I can only describe as an aroma that triggers memories of sitting on a tree covered riverbank as a kid. The burn has become only slightly off, but it’s quite windy outside so I don’t think it has anything to do with the construction. Towards the end of this third, the strength has picked up noticeably and the coffee bean note has gotten stronger as well. As I move into the final third the strength continues to grow, though the flavor profile remains sweet and creamy. The coffee and fruit notes dominate the profile with background nuttiness and spice adding minor, but important parts to the mix. The flavors remained solid and smooth to the end causing me to smoke it until it was burning my fingers, which finally forced me to put it down. As with any well-rated, thinner ring gauge cigar, I’m always curious how a fatter ring gauge of the same blend will hold up. While comparing notes from my review of the Laguito No.5 and Brooks Whittington’s review of the No.2, it did seem that Brooks enjoyed a little more complex and flavorful experience than I did. Having said that though, I think the blend worked great in this size and it actually had a very nice feel in my fingers—not too fat and not too skinny. The flavors were unique and robust, all while keeping what I would call an overall medium body, even with the cigar ending at full strength. As stated in the final notes, the construction was flawless and I wouldn't expect anything less from a master roller. This is a cigar I can easily recommend you try, in fact I’d go so far as suggesting you should find a box of these, as the following score will imply. However, while we don’t factor price into a score, you should probably factor it into your budget. The cigar has a hefty price tag on it, so even if this sounds like a cigar that’s right down your alley, it might behoove you to buy one or two before jumping on a full box. Either way, a single or a full box, The Laguito No.5 is a cigar that I think most everybody will enjoy and should make almost as big a splash as the No.2 did last year.